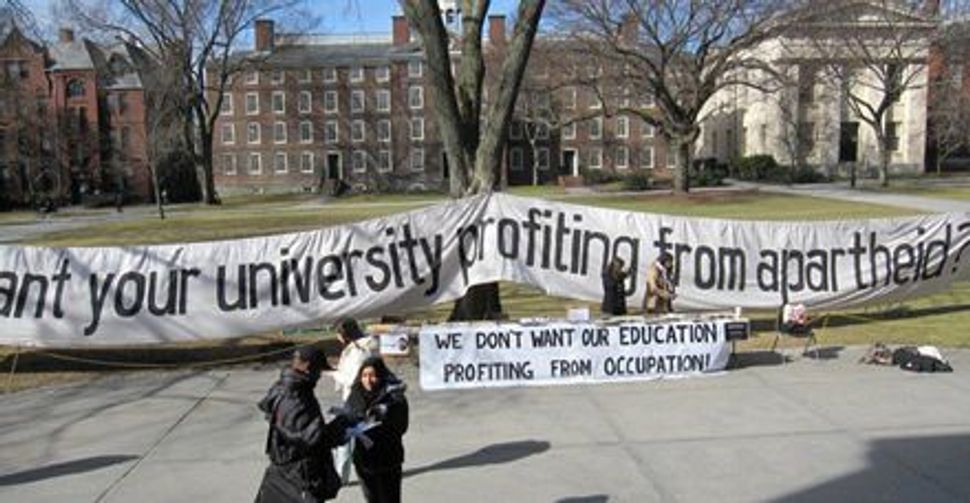 Image by Students for Justice in Palestine 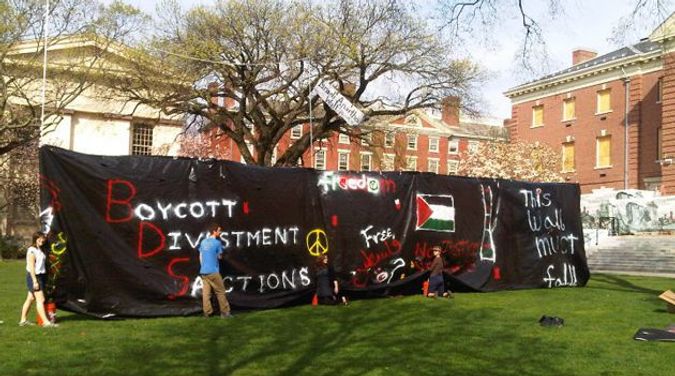 Campus Movement: Palestinian supporters hope to expand their activities on American college campus. A students group is planning a first-ever nationwide gathering. Image by Students for Justice in Palestine

Pro-Palestinian student activists are planning a national conference this month that they hope will bring new coordination and potency to the anti-Israel movement on campus.

The group Students for Justice in Palestine is already one of the most active pro-Palestinian groups at North American universities, but its diffuse chapters share no formal organizational ties. That could change this month, as student members try to unite into a more cohesive national group.

“SJP’s have decided to form their own national body to make sure students are at the forefront of deciding what the student movement is pursuing and how it pursues it, rather than off-campus organizations,” said Yaman Salahi, a student at Yale Law School and member of the ad hoc national committee that has organized the event.

In an October 2011 report on anti-Israel campus trends, the Anti-Defamation League called SJP “the primary organizer of anti-Israel events on campus.” Oren Segal, director of ADL’s Center on Extremism, said the prospect of the loosely organized student chapters coalescing on a national basis is troubling.

“The concern for ADL is, will there be an uptick in anti-Israel campaigns and extreme rhetoric because of this conference?” said Segal.

Subtitled “Students Confronting Apartheid,” the SJP conference was scheduled to run from October 14-16 at Columbia University. Organizers said they expected 300 attendees, all of them members or recent alumni of pro-Palestinian campus groups, and many of them members of campus groups that use the SJP name.

Since the founding of the first SJP at the University of California, Berkeley in 2001, the number of SJP groups has grown to over 75, according to the ADL.

The conference comes as the movement to boycott, divest from and sanction Israel — known as BDS — has emerged as a focus of campus pro-Palestinian activism. SJP chapters were behind the 2010 campaign to pass a pro-BDS resolution through the student government at Berkeley, among other efforts. A Forward investigation published last May found that claims of BDS’s prevalence on college campuses were exaggerated both by its supporters and its critics. But BDS has provided a rallying point for pro-Palestinian campus activists.

It’s not clear what sort of national body will come out of the SJP conference. Salahi said that the conference organizers were still settling on a decision-making process for the event.

The ADL itself is in a sense responsible for the existence of the conference, according to Salahi. In October of 2010, when the Jewish group put SJP on its list of the top 10 anti-Israel groups in America, SJP chapters responded by cooperating on a joint statement.

The SJP chapters termed the ADL description of them “a disingenuous and misguided attempt to vilify students who criticize Israel’s occupation.”

Another joint statement on a separate issue followed months later.

“These statements are part of what showed to us, first of all, the number of SJPs around the country, and the importance of connecting,” Salahi said.

The ADL’s Segal said that he was concerned that cooperation among SJPs could spread practices he saw as problematic between campuses. He specifically noted a policy known as “anti-normalization” promoted by the Columbia SJP chapter. In an April 2010 release on the Columbia chapter’s website, the group rejects participation in dialogue between Palestinians and Israelis “not explicitly designed to resist or expose the occupation.”

“Some specific forms of dialogue and collaboration between specific groups with different political aims that refuse to recognize the atrocities and the wrongs of occupation can be really counterproductive,” said Columbia graduate student Tanya Keilani, a member of Columbia’s SJP and the ad hoc national SJP committee organizing the conference.

Segal said that he worried that the conference could be used to spread the anti-normalization policy to other SJP chapters.

“You bring them all together and they have a conference and try to strategize and agree, it is possible that some of the more non-constructive efforts like this anti-normalization tactic may be spreading to the other chapters,” Segal said.

But Keilani said that the Columbia SJP wouldn’t have the power to impose its ideas on the rest of the network. “This conference isn’t about one student organization projecting their own policies on the entirety of the SJP groups,” she said. “We don’t really know how other SJPs feel about normalization. Obviously it’s something we feel strongly about.”

Mahmood Mamdani, a professor of government and anthropology at Columbia, and Rhoda Kanaaneh, an adjunct associate professor of anthropology at the school, will deliver keynote addresses. Titles of planned workshops include “The Economics of Israeli Colonialism,” “Israeli Apartheid Week,” and “Cultural and Academic Boycott of Israel.”

Not all conference attendees will be members of groups that call themselves Students for Justice in Palestine. The Brandeis chapter of Jewish Voice for Peace, an activist organization harshly critical of Israel, is sending a Brandeis junior named Morgan Conley as a representative.

“JVP definitely shares the same beliefs and goals that SJP has, so I think representing Brandeis JVP at the conference is an act of solidarity with SJP’s cause,” Conley said. “I think it’s definitely a really good way to start networking between the two groups.

Salahi said that Palestinians and Jews make up the largest national and religious groups on the conference’s steering committee.