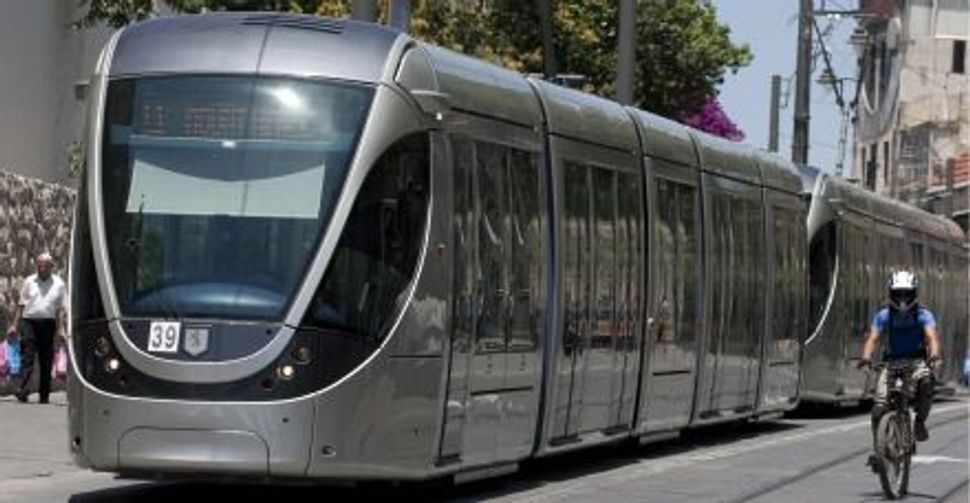 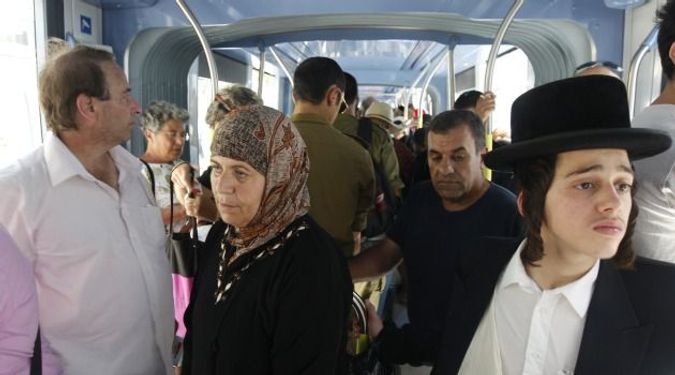 Boys Will Be Boys Jews and Arabs alike crowd onto the new Jerusalem light rail train. Even though it was delayed for years, the train is worth the wait. Image by AHMAD GHARABLI

Come and wait here, boys,” exclaimed an Arab man excitedly to a trio of American yeshiva bochers who study in Jerusalem. “It’s free and it’s fast — give it a try.”

Jerusalem may suffer from bitter divisions, but where trains, engines and new technology are concerned, boys will be boys. And so, the Arab man and the yeshiva bochers boarded Jerusalem’s light railway together, sharing excitement for the line, which opened in August and is offering free rides until further notice.

The railway was approved 15 years ago and was intended to start running more than 5 years ago; it became a standing joke in Jerusalem to ask which would arrive in the city first, the Messiah or the railway. Of course, it’s possible that the Messiah was waiting for a train and gave up.

But it has been worth the delays. Among the world’s major cities, Jerusalem’s transport has long been a laughingstock. There is no intercity train station near the city center, and the road infrastructure is inadequate — there simply isn’t enough room for all the cars.

Taking buses can be intimidating. Information on bus stop notice boards is confusing and often out of date. There are hardly any electronic displays to tell you when — or if — a bus is coming. And while drivers will tell you where they go, many know nothing about other lines, so trying to plan a journey with a transfer is very difficult without pre-Googled instructions.

The light railway, with its streetcar-like trains, is changing that, placing Jerusalem transit among the ranks of the New York subway, the Paris Metro, the London Underground and so on.

The light railway’s tracks run along Jerusalem’s roads, forming an express corridor through the nine most congested miles of the city, with trains scheduled every four-and-a-half minutes during peak periods and every eight minutes off peak. The route, which contains 23 stops, currently takes almost an hour to complete, but once clever adjustments are made to traffic lights to ensure the trains always have right of way, the trip will be cut down to under 40 minutes. At last, punctuality is possible in this gridlocked city. It is mindboggling to think just how many hours this will give back to those of us who spend large amounts of time in Jerusalem. We have become accustomed to bus rides spent wondering if we could have walked the route faster and taxi journeys during which the only thing moving is the meter.

But what about tourists? I spent a morning putting aside everything I know about navigating the city and looking at the new system through the eyes of a tourist who had just arrived.

I board at Central Station with the Arab man and yeshiva bochers and ride the entire route, disembarking occasionally when I see possible tourist attractions. The trains shimmy up to the stop remarkably quietly, and when the 12 doors open, the train floor is exactly in line with the platform, making boarding easy for wheelchair users and parents with strollers — an important consideration given Jerusalem’s high birth rates. Platform displays in Hebrew, Arabic and English tell you when the next train is due and where it is headed.

“I normally get so lost here,” says 34-year-old French tourist Jacques Davis, who has been using the train for a week. “Now I’m so much more relaxed moving around, as wherever I find myself I just ask for directions ‘back to base’ — to the nearest train stop — and use my map to navigate my route.”

Inside our train, where more trilingual displays tell you the upcoming stop, there is an amazing cross-section of Jerusalem society: Arab men and women with children, Haredim, Jewish immigrants speaking half a dozen different languages and assorted clerics from the various churches. For many passengers, it is something of a spiritual journey — Haredi women sit reciting psalms as they are accustomed to doing while traveling, and Muslim men mutter the names of God and count them off on their prayer beads.

Off the train speeds, westward to Mount Herzl — the terminus — Israel’s national cemetery and the burial place of Theodor Herzl, founder of modern Zionism, and a popular tourist destination. Visitors might note that the stop is within short walking distance of Yad Vashem. Catching the train is worthwhile just to ride on the Bridge of Strings, a magnificent (though some say ghastly) cable-stayed bridge that bypasses all the traffic below.

In the other direction, toward the Pisgat Ze’ev terminus in the northeast section of the city, the train stops at Mahane Yehuda, the colorful market that every visitor must see, before continuing to Jaffa Center, which serves the city’s main hub of shops and cafes around Ben Yehuda Street.

The train then offers some time travel: from the modern city center to the Old City. Alighting at the Damascus Gate stop, visitors can explore by foot the whole Old City, and quickly reach the key attractions, including the Arab shuk, the Western Wall and Temple-era excavations.

From the Damascus Gate stop toward the terminus, the ride is like a crash course in the entangled geography of Jews and Arabs in Jerusalem. The traditional Muslim dress that dominates the Damascus Gate scene soon changes for the yarmulkes of Jewish neighborhoods like Shimon HaTzadik, until the train once again passes into the Arab districts of Shuafat and Beit Hanina. Soon it is in its terminus in Pisgat Ze’ev, which the international community deems a settlement.

To pessimists, by building over the Green Line through settlements and Palestinian areas, Israel is tightening its hold on areas conquered after 1967 and lowering the chances of withdrawal and a peace agreement. To optimists, the carriages could one day form a peace train, facilitating freedom of movement through the shared capital of two friendly states.

The train stops by many of the city’s small museums, including the Museum on the Seam, a socio-political contemporary art museum where exhibits cleverly grapple with the Middle East conflict, and the U. Nahon Museum of Italian Jewish Art (Shivtei Israel and Jaffa Central stops, respectively).

Instead of choosing outings and trying to work out the travel arrangements, tourists can look at the train route and choose nearby sites of interest like these. In this way, for tourists, the light rail offers a whole new user-friendly, convenient and timesaving way of exploring the city.