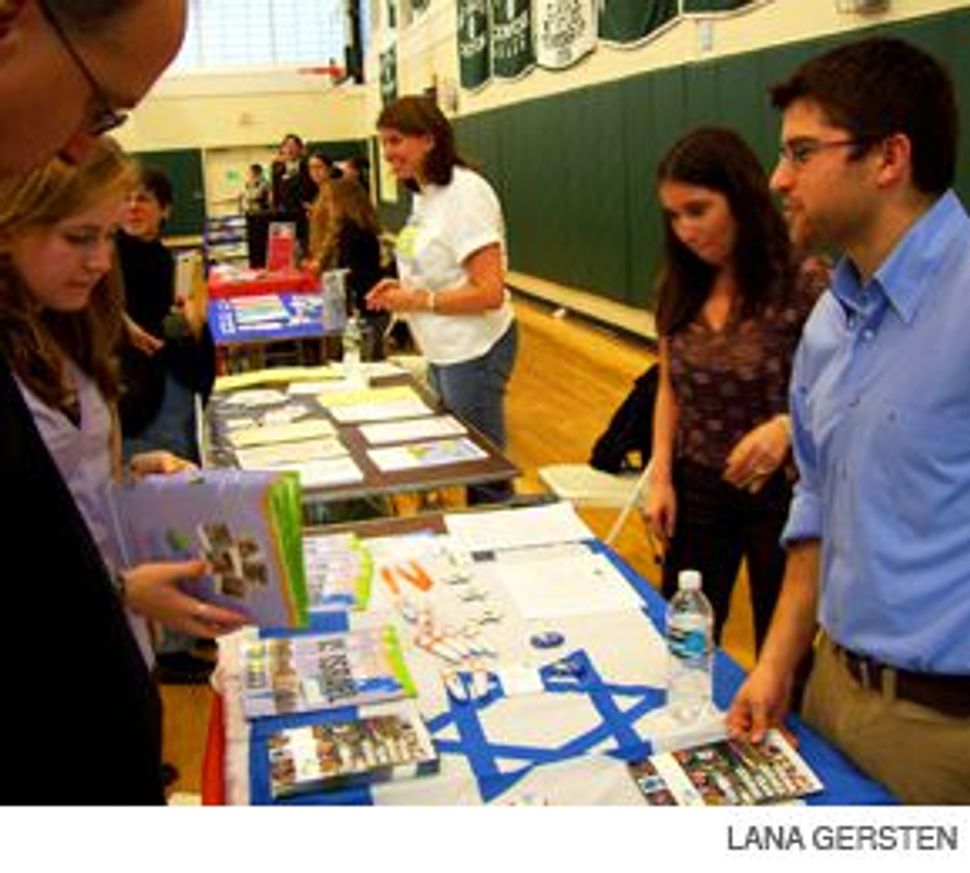 ALL OPTIONS ON THE TABLE: Parents and students talk with representatives from universities and Israel programs at a recent college fair hosted by the Solomon Schechter School of Westchester.

Sharon Rappaport and her 16-year-old son Josh wandered through the college fair at the Solomon Schechter School of Westchester, joining dozens of other families in peppering admissions counselors with questions about campus life, courses and costs. 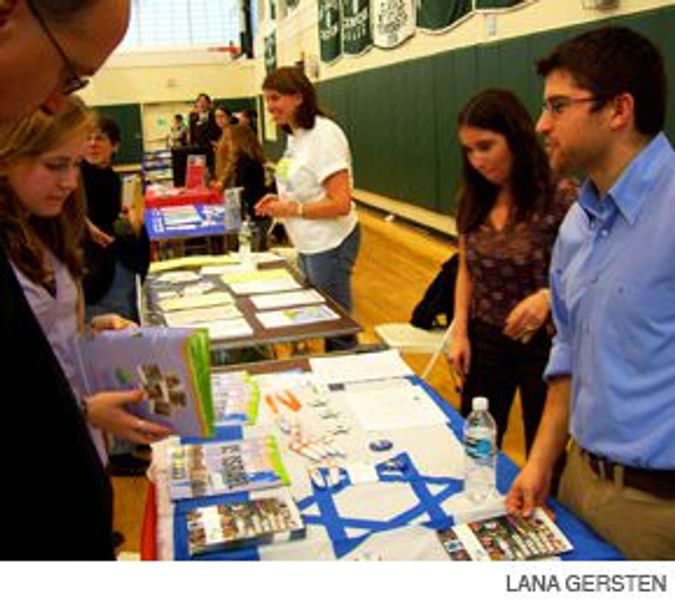 ALL OPTIONS ON THE TABLE: Parents and students talk with representatives from universities and Israel programs at a recent college fair hosted by the Solomon Schechter School of Westchester.

As a junior at Solomon Schechter, located in the affluent Westchester community of Hartsdale, Josh is just beginning to focus on what college he wants to attend. But because of the financial meltdown on Wall Street, he and his mother — along with other families at the October 19 fair — are worrying anew about paying for college. Some said they will be more interested in state universities, with their cheaper tuition, than they might have been before the market dropped.

Those who had spent years investing money in college funds, much of which is tied up in stocks and bonds, are holding portfolios that have lost a considerable amount of value in recent weeks. With teenage sons and daughters who are headed to college in a year or two, it’s too soon to say what the impact will be, but it appears unlikely that they’ll have enough time to recuperate from their financial losses.

For her part, Rappaport has seen 25% of her college savings fund wiped out in the last few weeks. “Education is the one thing I value very much, but somehow I’m going to have to figure out how to pay for it,” she said, as she walked among the booths set up in the school’s gymnasium.

“Jews have traditionally invested in social capital,” said Deborah Dash Moore, professor of history at the University of Michigan, “which means that they have seen an investment in their children’s education as something that is more worthwhile than an investment, for example, in real estate.” These days, “it’s just assumed if you’re Jewish, you’re going to go” to college.

According to the 2008 Pew Forum U.S. Religious Landscape Survey, 59% of American Jews have a college degree or better, compared to 27% of the general population.

With an emphasis on education comes a tradition of setting aside money in college funds, said Dash Moore. “Putting money aside is part of that investment,” she added.

Many families at the college fair in Westchester, a community with a large Jewish population, had saved for years and thought — until now — that they could comfortably pay for their children’s college tuitions.

As a possible harbinger of what is to come, some families are looking toward state schools as a more affordable option. At the State University of New York, which has 64 colleges and universities throughout New York, tuition for the four-year baccalaureate schools is $4,350 for in-state students and $10,610 for out-of-state residents — a much cheaper option than many of the private schools that charge tuition of upwards of $40,000 a year.

For Shari Lipsky, whose daughter Rebekah is a junior at Solomon Schechter, that rings particularly true. “I think those of us that turned our noses up at the state university because we thought our geniuses could do better, we’re all having them apply to state university.”

At the City University of New York, where tuition is $4,000 per year for in-state students, recruiters said they anticipated an increase in applications this fall. Although the CUNY booth at the college fair was less popular than other booths, such as the University of Massachusetts at Amherst and George Washington University, admissions counselor Shannon Wallace talked optimistically about the increase in applications to CUNY’s Macauley Honors College, which started in 2001 and is tuition-free. Wallace suggested that the increase might be because more students who would have applied to the private schools are now applying to the Macauley program for its affordability. It could also be a result of CUNY’s improved reputation.

“The honors college frankly helped create, accurately so, a

magnet for high academic achievers who might not have considered CUNY as seriously as they should have,” said Jay Hershenson, senior vice chancellor for university relations.

For those still looking at the high-end private schools, financial aid will get new consideration. At Rae Kushner Yeshiva High School in Livingston, N.J., another affluent town with a large Jewish population, college counselor Gary Berger plans to offer his first-ever workshop on how to fill out the Free Application for Federal Student Aid.

“I think that people that would not necessarily have had a problem to pay for tuition are now thinking about filling out forms like the FAFSA to see what the government says they can afford,” Berger said.

But Rappaport, who is a single parent and whose older son was denied federal aid when he matriculated at the University of Michigan two years ago, still believes she will not qualify for financial aid next year.

“Unfortunately I’m in that broad mix of making a little too much money to get the financial aid that I really need, but not enough money to be able to afford to send two kids to college,” she said.

Some employed in jobs related to college preparation say they are hearing concerns from families, but are not seeing drastic changes in the way they are approaching the college process.

Sam Hershy, a tutor for the Scholastic Aptitude Test in Westchester, has not seen an immediate impact on his business. Neither has Betsy Woolf, who runs an independent college counseling service from her home in Mamaroneck, N.Y.

Although both acknowledge that there has been some mention of finances among their clients, they suspect that any big impact will probably come next year. In fact, Hershy said of all the students he tutors, not one is applying to a state school instead of an expensive private school. “That kind of change isn’t realistic,” he said. “People of our background know how important education is. If they’re going to try to cut back, I don’t think it’s going to be on the education they’re giving to their kids.”

On a college tour Woolf recently attended, not a single admissions officer even addressed the economic crisis, she said. “This whole financial issue is sort of like the elephant in the closet.”