President Confuses Jews and Janitors, Or Does He? 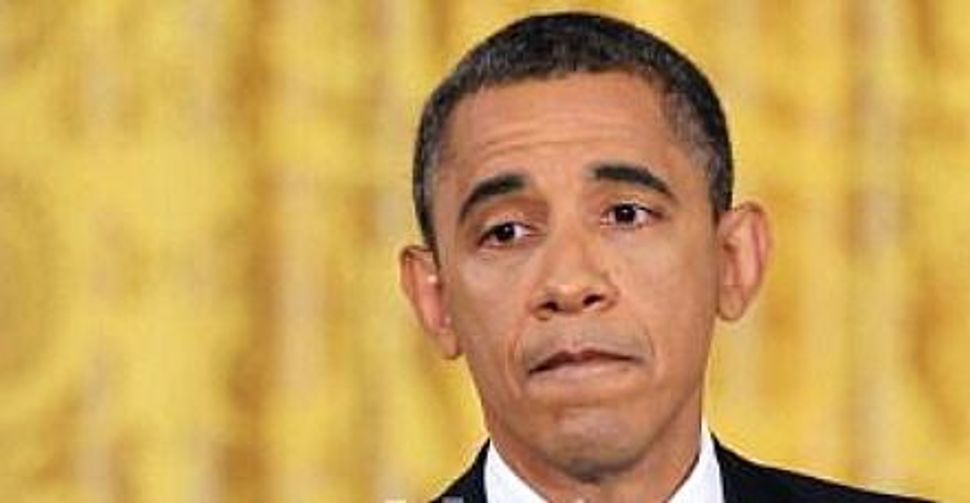 It took a friend to bring to my attention President Obama?s recent and underreported slip of the tongue, made during an address to the Congressional Black Caucus on September 24, in which he confused the words ?janitor? and ?Jew.? Though mentioned on the Forward?s Shmooze blog, the media made scant mention of the incident for the most part. Nor did the slip appear in the official transcript of the president?s talk, the relevant passage in which was none too grammatically worded:

Slip or Slur?: President Obama largely avoided being trashed when he appeared to confuse Jews and janitors. Philologos thinks he knows what he may have meant. Image by Getty Images

?When you start saying, at a time when the top one-tenth of 1% [of Americans] has seen their incomes go up four or fives times over the last 20 years, and folks at the bottom have seen their incomes decline ? and your response is that you want poor folks to pay more?

?Give me a break.

?If asking a billionaire to pay the same tax rate as a janitor makes me a warrior for the working class, I wear that with a badge of honor.?

What the president really said, however, as can be heard in the video of his talk, was: ?If asking a billionaire to pay the same tax rate as a Jew ? uh, as a janitor ? makes me a warrior for the working class, I wear that with a badge of honor.?

This was an embarrassing moment on which not even President Obama?s political enemies have shown much inclination to dwell. Rush Limbaugh, one of the few nationally known political commentators to refer to the incident, actually came to the president?s defense by saying on his September 26 talk show: ?So he was confusing ?Jew? with ?janitor? and he admits that. Just think how outraged the Revs. Wright and Farrakhan would be if they heard Obama say that Jews were paying too much in taxes like he thinks the janitors probably are.?

Limbaugh, in other words, attributed the remark to plain inadvertence. Since the president?s real opinion could not possibly be that a high-earning ethnic group like the Jews should be taxed like a low-income group, he was guilty of no more than an insignificant gaffe.

This is not, of course, what would have been said by Freud, whose theories gave us the expression ?Freudian slip.? (Freud?s own German term for the phenomenon was Versprechen, or ?speech blunder.?) Freud?s position was that, just as there is no such thing as an inadvertent or insignificant dream, all dreams being expressions of unconscious thoughts and emotions, so there is no such thing as an inadvertent or insignificant speech blunder. In some cases, he wrote in a chapter on the subject in his ?Zur Psychopathologie des Alltageslebens? (translated as ?The Psychology of Everyday Life?), the blunder may involve the direct substitution of an unconscious thought for a conscious one, as when a patient of his intended to praise her family for its intellectuality (Geist) but instead revealed her true feelings about it by saying Geiz, ?stinginess.?

If this is what President Obama was doing, his slip would indeed make little psychological sense. What subconscious thought about Jews could he have been expressing by substituting them for janitors? Yet in the same chapter, Freud gives other, more complex examples of speech blunders. One of these involves another woman patient, who remembered being sexually fondled by a relative as a child but could not remember what part of her body had been touched. Subconsciously, though, she remembered very well, since, having gone on to another subject entirely, she mistakenly said ?Berglende? instead of Berglehne when mentioning the name of a resort town in which she had visited a friend. Lende in German means ?thigh.?

Speech blunders, in other words, can unconsciously refer back to previous remarks. Regarded in this light, President Obama?s slip has a simple explanation. The president had been speaking of the upper tenth of a percentile of Americans, whose earnings, but not their tax rates, have soared. Would not Freud have said that in referring to this group he was in all likelihood unconsciously thinking of what, to his mind, is its disproportionately high Jewish element ? a thought that popped to the mental surface a moment later, when he intended to say one J word but unintentionally uttered a different one in its place?

Of course, we don?t all have to be Freudians. Moreover, even if we are, we don?t have to interpret Obama?s remark as anti-Semitic. He is, after all, an incumbent in the process of seeking re-election, which means raising large sums of money ? and this in turn means appealing to Jewish donors, who in America constitute a disproportionately high number of the wealthy people contributing to political causes. If rich Jews are on the president?s mind these days, one can easily understand why they would be. Naturally, he?s not going to say that they are, but Freud would have considered it perfectly normal for him to have let his subconscious say it for him.

President Confuses Jews and Janitors, Or Does He?