Young Writers Ask What Is Next To Occupy 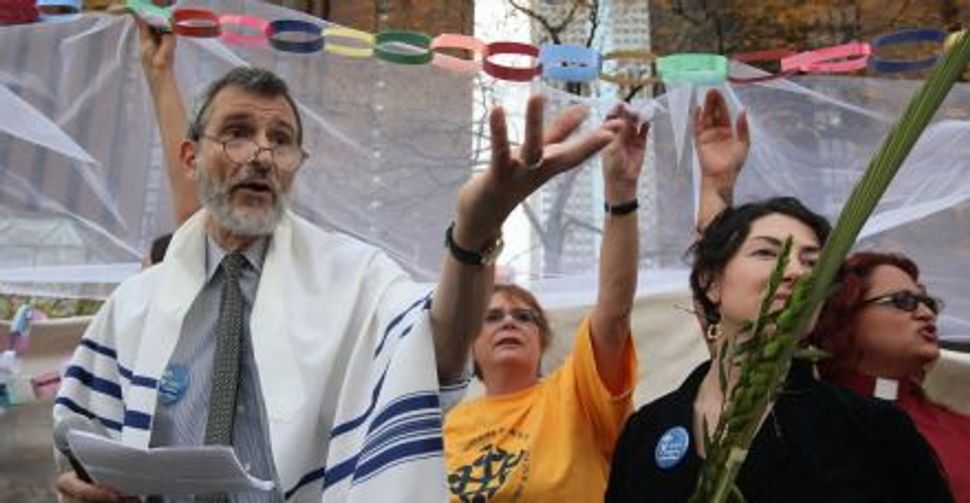 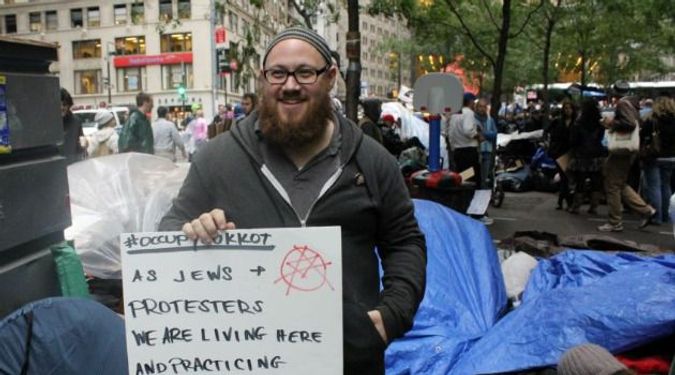 For the Torah Shall Go Forth to Zuccotti Park, and the Word of God to Wall Street

Jews of my parents? generation were broadly involved in the protests of their youth: marching in Selma, Ala; riding for freedom; marching on Washington. Given that, the attempt by the establishment and by politically conservative Jews to discredit the association between Jewish ritual and the Occupy Wall Street protests is shockingly misguided.

The claim that the protesters are anti-Semites is as specious as any attempt to paint an entire group of contemporary Americans as such. And the reliance of those making that claim on the presence of pro-Palestinian sentiments among the protesters shows how out of touch establishment Jews are with the younger generation of American Jews that turned out in staggering numbers (as few as 700, according to some; as many as 1,000, according to others) for a Kol Nidre service in a plaza across the street from Occupy Wall Street?s home base. This is not a group of Jews with much sympathy for the old ?You?re either pro-Israel or anti-Israel? line of the Jewish establishment.

We know that the American Jewish establishment is concerned that Judaism is losing relevance to young Jews, a concern that I share. So why am I excited about this new development while many Jewish leaders disparage it?

Judaism doesn?t get more relevant than rabbinical student Getzel Davis?s sermon at that Kol Nidre service, which said, in part: ?According to our myth, Yom Kippur is the day that we are forgiven for worshipping the golden calf. What is the golden calf? It is the essence of idol worship. It is the fallacy that gold is God.?

And how much more relevant does Jewish religious practice get than establishing a sukkah ? an intentionally temporary, fragile dwelling ? at the heart of protests that highlight, among other grievances, the economic insecurity that has bred a plague of home foreclosures across America?

The notion that it?s harmfully reductionist to make Judaism all about social justice is nothing new. But it?s being trotted out anew by those who are needlessly suspicious of the marriage of Judaism and Occupy Wall Street (which now has a website and Facebook page and is going by the name Occupy Judaism). On the contrary, Occupy Judaism is a beautiful synthesis of three undeniably Jewish things: values with deep roots in Jewish texts; earnest, spiritual and well-informed public performance of Jewish rituals, and a commitment to bettering the lives of the less fortunate. What could be more Jewish than that?

When the plaza that hosted Occupy Judaism?s Kol Nidre service echoes with the voices of Jews dancing and singing with the Torah in observance of Simchat Torah, the words of the prophet Isaiah come alive: ?Ki miTzion teitzei Torah, udevar-Adonai miYerushalayim.?

?For the Torah shall go forth from Zion, and the word of God from Jerusalem.?

David A.M. Wilensky is the editor of New Voices magazine and the director of the Jewish Student Press Service.

The Real Answer Is Real Sacrifice

The protests came to Chicago shortly after their genesis in New York. Expressing the same dissatisfaction that had motivated their counterparts on the East Coast, people gathered at the corner of Jackson and LaSalle to march outside the Federal Reserve Bank. Daily meetings were called to draft a mission statement. Within a few days, a website was launched.

I agree that the problems named by the Occupy movement need to be fixed: the gap between the haves and have-nots is growing; our banks and multinational corporations are not being held accountable for their contribution to the recession, and the political field is dominated by the wealthy few. Yet, I am concerned about the efficacy of the protests; by and large, it is a form of catharsis, which targets a distant opponent while demanding little change from the participants themselves. Examining ourselves is much more difficult.

It is a simple statement of fact that the time, energy and capital being spent occupying a street corner could be applied to other activities. Rarely does waving signs change the political landscape of our government. Rather, campaigning for and electing politicians who share our concerns will bring about change; especially if they are going to run against the corporate lobby, these men and women will need volunteers to knock on doors, staff phone banks and fill voting booths.

Certainly, the most impoverished among us are not spending their day at the intersection of Jackson and LaSalle; rather, they are begging for money on other street corners, working minimum-wage jobs, or lining up at soup kitchens. And that is where we need to be, as well: volunteering in homeless shelters, mentoring children from underfunded schools, cleaning up our streets, serving on neighborhood watches. Are we willing to drink coffee at home instead of buying lattes, to rent movies instead of attending the cinema to forgo a night out with friends? Are we willing to live modestly and give the time and money we save to those who need them most?

Admittedly, this is not an easy task. Like the corporate executives we criticize, we grow comfortable with our material comforts. But it is convenient to point the finger at someone else when we, too, need to be part of the change.

Steven Philp is a Master of Divinity student at the University of Chicago and blogs for New Voices magazine.

Where do they go from here? 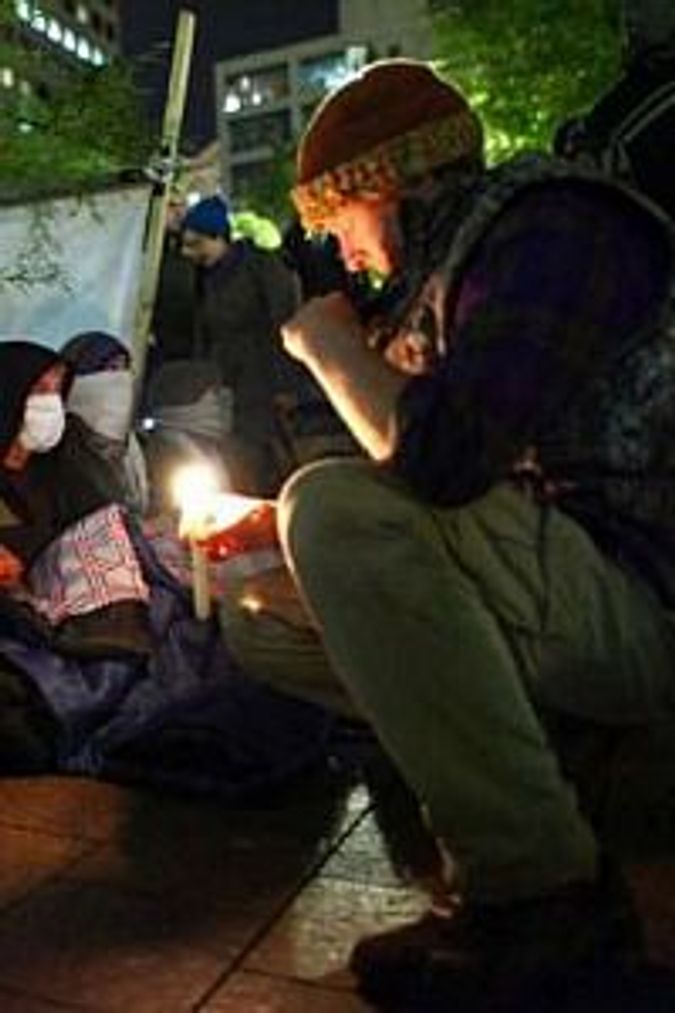 To me, it seems that the real question about the Occupy Wall Street and supporting protests around the country is where they?ll go from here. Expressing principled opposition to a legitimate problem is a vital starting place for a movement. In order to effect real change, we have to be willing to work within the messy and slow-paced political system. Especially for a movement that, unlike the Tea Party, doesn?t have political action committees making all the decisions, it?s going to be difficult to mobilize around achievable political goals. We shouldn?t abandon the incredible displays of solidarity that are taking place in the protests, but we can?t confine our activism solely to holding signs.

Moving forward, the challenge will to find a way to really influence elections, as the Tea Party has done. Democratic movements like Occupy Wall Street are inspiring. Let?s get some of the inspired people into office ? that?s when we?ll see these injustices addressed.

Harpo Jaeger is a junior at Brown University and the blog editor of New Voices magazine.

I?m extremely ambivalent about Occupy Boston. As a child of the George W. Bush era, my natural response to, say, pointless wars or the banks stealing everything or the most income inequality in the developed world is effected apathy and a threat to move to Canada. 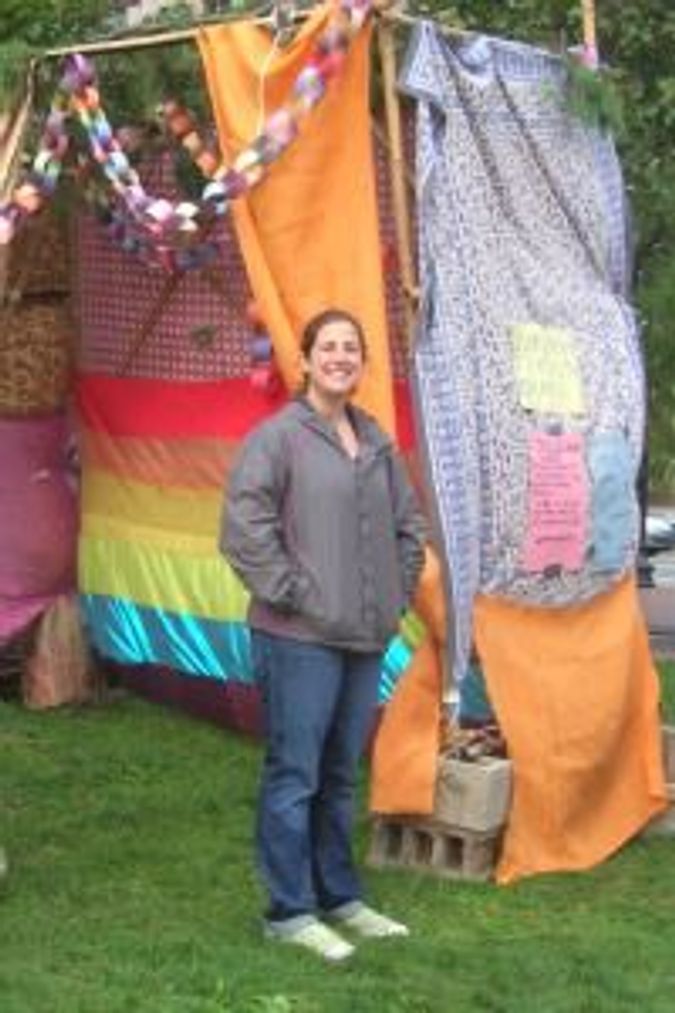 Sukkah Nation: Activists allied with the Occupy Wall Street protest erected a sukkah in Boston (above) and several other cities across the country. Image by Anne Fox

What?s happening now in Dewey Square is too earnest, too old school for my taste. To me, political action is saying, ?Screw it, I?m not going to vote.? On the other hand, I do care about my city, and the foreclosures in the ?hood are putting families on the streets. It?s Bank of America that is doing this, at the same time as it gives its executives multimillion-dollar salaries with taxpayer money. So as a human, I?m against that. But getting e-mails from the Progressive Student Alliance, saying, ?The unions need us to protest right now!? just makes me want to watch ?Mad Men? in the basement. Does that make me a bad person?

Max Elstein Keisler is a student at the Harvard Extension School and a regular contributor to and blogger at New Voices magazine.

This ?Movement? Is Disingenuous

Frankly, it?s hard to have an opinion on Occupy Wall Street or any of its companions, simply because nobody knows what it wants. The Occupy movement has even less of a clear set of demands than the Tea Party.

But from what we know so far, there?s reason to be suspicious. The protesters claim that they are ?the 99%? is simply disingenuous. The United States is far too diverse in beliefs and backgrounds to claim such a monolithically simplistic position.

It?s irresponsible to agree with rhetoric that has no basis in concrete positions. To sign on to a slogan and not a platform isn?t democracy; it?s a mob.

Zach C. Cohen is a sophomore at American University and a national correspondent for New Voices magazine.

These essays are presented in partnership with New Voices Magazine, the national Jewish student publication. To see more, go to newvoices.org.

Young Writers Ask What Is Next To Occupy