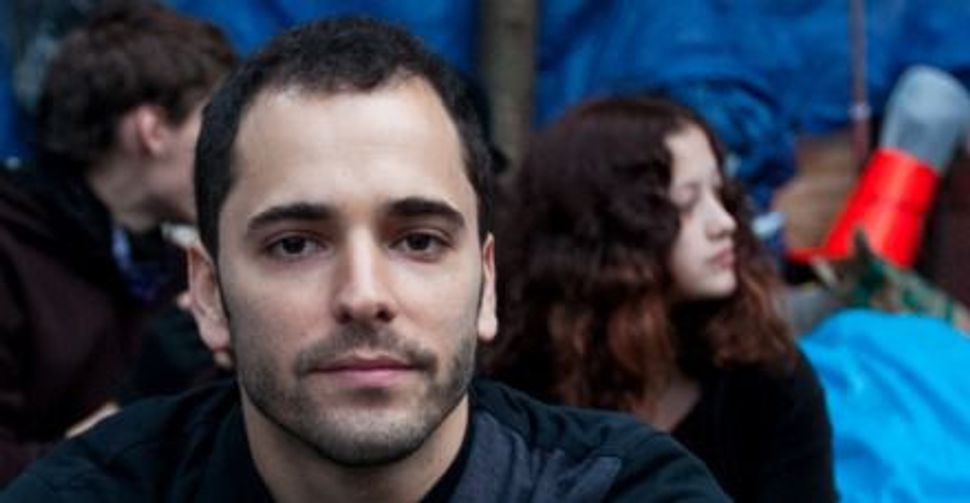 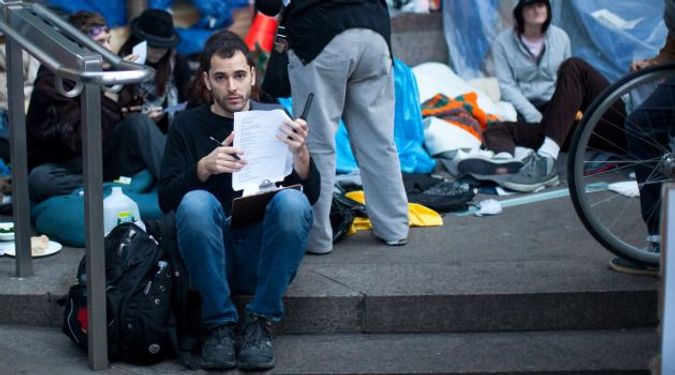 At the Downtown Manhattan base camp of the Occupy Wall Street protest movement, young Lubavitchers filter through the activist crowd, seeking Jews. But when one approached Kobi Skolnick, a 30-year-old Israeli with a heavy Hebrew accent, Skolnick lied.

“No, I’m Palestinian!” he told the lulav-bearing Lubavitcher.

Skolnick is, in fact, Jewish. And not only that — he’s a onetime Lubavitcher turned right-wing settler turned peace activist, now at the center of the leftist protest movement roiling cities across the United States and the world.

Despite allegations of anti-Semitism at Occupy Wall Street, Jewish activists can be found at the heart of the anti-corporate movement. And though the Jewish protest actions tagged to Yom Kippur and Sukkot observances have drawn the most attention, those religious activists aren’t the only Jews helping shape the movement’s inchoate message.

On October 15, a group gathered in a corner of Zuccotti Park, the downtown plaza “occupied” by the activists, singing “Solidarity Forever” under a banner bearing the name of Camp Kinderland, a Jewish socialist summer camp.

Days later, Skolnick smoked a cigarette as he showed a Forward reporter through the plaza, past a press gaggle gathering around a visiting Rev. Jesse Jackson, past a set of tables marked “Library” and stacked with hundreds of volumes, and past a long buffet of donated food.

The Occupy Wall Street movement prides itself on its nonhierarchical organization that in principle has no leaders. But Skolnick is an active member of three of the working groups helping to direct the protest, including its public relations group and a group that builds relationships with copycat movements cropping up nationally.

“The first thing here is to raise awareness,” Skolnick said. “In that we already won.”

Skolnick has a small tattoo of a peace symbol on his wrist. He got it in 2004, the same day that he was nearly arrested at a major New York City protest. But he wasn’t always a left-wing activist.

Born to a Lubavitch family in Israel, Skolnick grew up in the southern Israeli town of Kiryat Malachi, attending Lubavitch yeshivas. At 14, he chose to leave the ultra-Orthodox school system for a national religious school, a massive cultural leap out of the isolated Haredi community and into the religious Zionist mainstream. He wound up at a yeshiva in Itamar, a West Bank settlement with a radical reputation, where he joined a youth group affiliated with the extreme right-wing Kahanist movement.

“I would go with them to actions in Palestinian cities, throwing rocks at Palestinian cars,” Skolnick said of his time in the youth movement. He and his comrades would enter the Palestinian city of Hebron, attacking Palestinians who approached them.

But after he joined the Israel Defense Forces, Skolnick said, contact with Palestinians and the deaths of many friends led him to a second reappraisal, one that seems to have stuck.

“Since then, I’ve become active intellectually and physically, trying to create different models of dialogue, trying to change the lack of peace,” he said.

Skolnick, who moved to the United States in 2003, now leads workshops on the conflict, often in tandem with a Palestinian named Aziz Abu Sarah. Their presentations have been sponsored by J Street, among other groups.

But he said that he hasn’t spoken much about his past with fellow activists at Occupy Wall Street.

Skolnick dismisses the charge that the Occupy Wall Street movement is broadly anti-Semitic. That allegation was aired recently in a Web video produced by the Emergency Committee for Israel, a Republican-dominated group that highlighted mainstream Democratic support for the protest alongside images of anti-Semitic protesters.

“It does exist, but it’s like three people,” Skolnick said of anti-Semitic rhetoric at Zuccotti Park. “They’re not articulate enough. You bring facts, and they get stressed.”

When one man brought a sign alleging Zionist control of banks, Skolnick said activists simply made a bigger sign and stood next to him.

Skolnick arrived at the protest in mid-September, just a day after it began. He had wanted to fly back to Israel during the tent protests there this past summer, but he didn’t have the money.

“When it started to take place here, I said, okay, I’m jumping in,” Skolnick said.

He soon quit his job at a restaurant in Brooklyn and dedicated himself full time to the movement. He says that he works for Occupy Wall Street 12 to 16 hours a day, going home only to sleep. He is committed to the cause until at least January 2012, when he’s slated to start a master’s program at Columbia University in negotiation and conflict resolution.

Occupying Wall Street is busy work. When Skolnick checked his cell phone after a 20-minute walk through the Zuccotti Park encampment with the Forward, there were 48 new text messages waiting for him. He said that he receives more than 1,000 e-mails a day.

Skolnick said that he thought the Kol Nidre service organized by Jewish activists across the street from Zuccotti Park in support of Occupy Wall Street was “beautiful,” and he briefly attended even though he is no longer religious.

On the night of October 14, police officers asked Jewish activists to take down a tent that the group Jews for Racial and Economic Justice had set up to facilitate a Friday night meal. According to Dan Sieradski, a key organizer of the Jewish religious events at the protest, when the protesters claimed the tent was a sukkah, police pointed out that one couldn’t see stars through the roof.