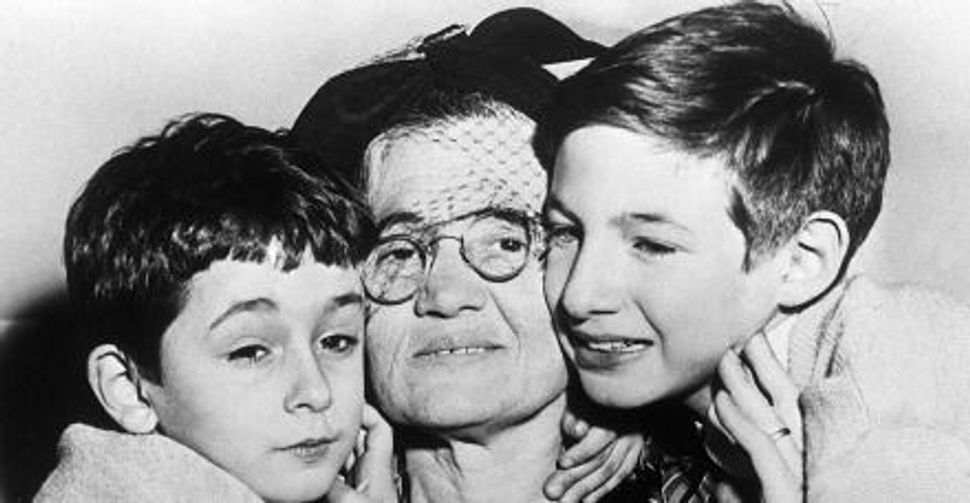 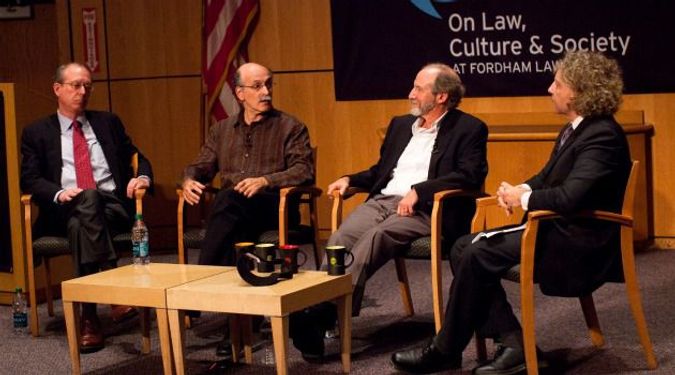 Brothers Up in Arms: Robert and Michael Meeropol, center, speak at a forum about the movie, ?Daniel,? based on the trial of their parents, Julius and Ethel Rosenberg. Image by CLAUDIO PAPAPIETRO

Fiction and fact intersected dramatically when the real-life sons of Ethel and Julius Rosenberg made a rare joint public appearance for a screening and discussion of “Daniel,” a movie inspired by their parents’ infamous trial on conspiracy to commit espionage charges.

During their 1951 trial, Ethel and Julius Rosenberg, Jewish New Yorkers and Communists, were charged with leaking secrets about the atomic bomb to the Soviet Union during World War II. They were convicted and became the first and only American civilians to be executed for espionage conspiracy. The trial is often cited as a blemish on American legal history and an example of what hysteria (in this case, the Red Scare) can compel a country to do unjustly. 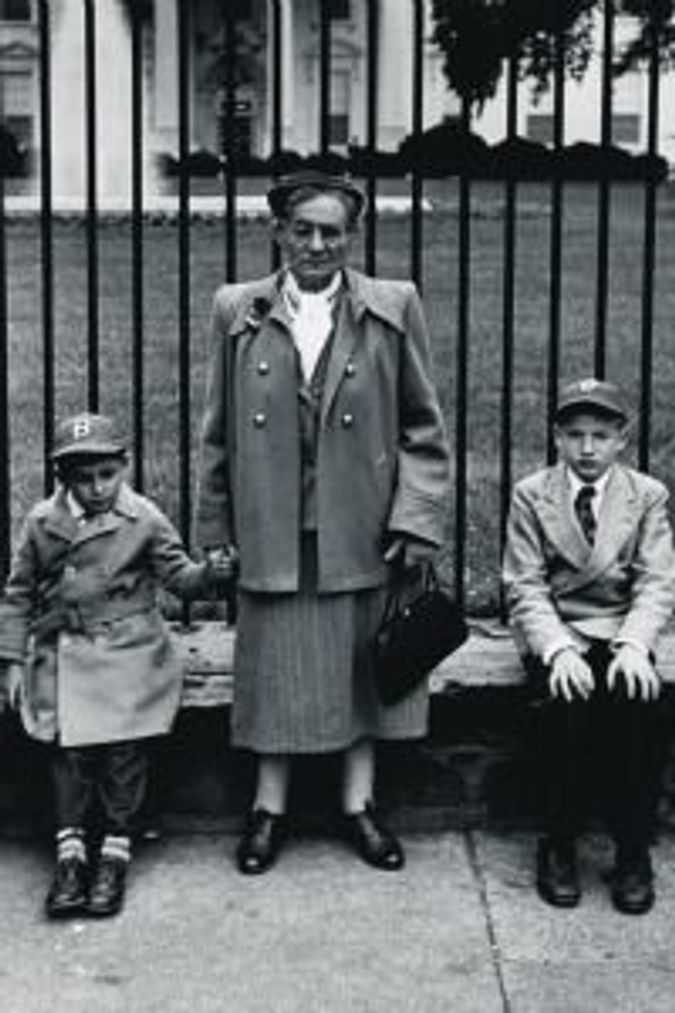 Deaf Ears: The Rosenbergs? sons and their grandmother making a futile appeal to the White House to stop their execution. Image by getty images

The Rosenbergs left behind two children, Robert and Michael, who were 6 and 10 years old, respectively, at the time their parents died in the electric chair, in 1953. They were later adopted by Anne and Abel Meeropol, and both boys took Meeropol as a surname.

Though “Daniel,” the 1983 film by Sidney Lumet, is a work of fiction and is based on E.L. Doctorow’s novel, “The Book of Daniel,” it follows the same basic premise as the Rosenberg trial.

Robert Meeropol had seen the movie twice before, but said he still found himself agitated by it during a communal viewing on October 15 that was sponsored by Fordham University Law School’s Forum on Law, Culture & Society.

“It was harder to watch than I thought it would be. The longer I watched, the madder I got,” Meeropol said in the post-screening discussion. His anger, he surmised, came from “the feeling that an entire generation of people seeing this film are going to think this is who we are.”

The movie follows two characters, Rochelle and Paul Isaacson, a married couple who have two children — though in the movie the children are Daniel and Susan, not two brothers. The Isaacson parents, who are depicted throughout the movie as committed Communists, are accused of leaking state secrets to the Russians. (Whether they are guilty remains unclear.)

The movie culminates in back-to-back scenes of Paul and Rochelle’s executions in the electric chair. Michael Meeropol, who had not seen the movie before, said he had been forewarned and left the auditorium from his seat in the back row shortly before the executions were shown on screen.

Watching the film in the same audience as the Meeropol brothers was an unusually emotional environment for a film screening. “I felt a very palpable sense of discomfort,” said Thane Rosenbaum, a professor at Fordham University’s law school and a friend of the Meeropols.

“People were emotionally connected to the [movie’s] story, and then the actual facts of the story materialized when the lights came on,” Rosenbaum said.

The fictional Isaacson children are not, it should be clearly stated, one and the same as the Meeropols. In fact, the Meeropol brothers today bear little resemblance in age or in temperament to the Isaacson siblings in the film, who are shown as small, traumatized children and damaged young adults.

In contrast, the Meeropol brothers, who are both well into their 60s, are accomplished and articulate. Michael, a retired professor of economics at Western New England College, is a monthly commentator for Albany’s NPR affiliate station.

Robert is an attorney who left private practice to found the Rosenberg Fund for Children, which provides for the educational and emotional needs of activist youth and the children of activists.

Robert noted that his work with the Rosenberg Fund helped him stay positive in the face of the trauma of his early childhood. He said people often ask him if he’s angry or bitter at the government.

“My attitude is, once I found a positive outlet for what happened back then, it’s not that I forgave, it’s just that all of that became irrelevant, because I had something good to do,” he said.

Throughout the panel discussion, the Meeropols were good-humored and seemed to have no trouble speaking candidly about the circumstances of their parents’ deaths. (Both brothers have also written extensively about the case and have fought legal battles in an effort to clear the historical record.)

At their parents’ trial, the key witness was Ethel’s own brother, David Greenglass, who admitted in 2001 to lying on the witness stand to protect his own wife and children. Today, after the release of the intercepted Venona cables from the Soviet consulate to the KGB, it is widely accepted that Julius Rosenberg was, indeed, a spy who passed along information, but nothing of nearly as much value as atomic bomb secrets. Those same cables contain information confirming what the Meeropols have long believed — that their mother was innocent.

Michael Meeropol said he wasn’t as angered by the movie’s fictional liberties as his brother had been, but he admitted that having works of fiction based on his real-life family did have its downsides.

“There’s no question that it does get confusing,” he said. “And people are wondering, ‘How much of this is the real Rosenberg case?’”

As such, much of the panelists’ discussion focused on delineating what actually happened during the Rosenbergs’ trial. The panelists also debated what, if any, obligations artists have when they base fictional works on real people.

Later in the conversation, Haberman brought up another aspect of the Rosenberg trial, one only briefly touched upon in the film: the fact that many players in the case, including the Rosenbergs, their judge, the prosecutors and the defense lawyers, were Jewish.

“New York in that era was very much a Jewish city, much more than it is now,” Haberman said. “You couldn’t get away from the fact that everyone involved with this case was Jewish.”

Haberman, who was raised as an Orthodox Jew, said he was particularly disturbed to have learned that the Rosenbergs’ execution times, which were originally scheduled after sundown on a Friday, were expedited — rather than delayed — so that they wouldn’t fall during the Sabbath.

The forum represented an unusual collaboration between the brothers, who rarely, if ever, speak together publicly about their parents. “We never do this,” Michael said in an interview following the forum.

The brothers, do, however, have their own strongly held opinions about the art inspired by their parents’ trial.

Michael Meeropol professed that he is a fan of Doctorow’s “The Book of Daniel.”

“I found it an excellent work of fiction, an interesting political take,” he said. It was, in his opinion, “much richer than the film.”

He added that since he knew the real Ethel and Julius Rosenberg, he “never got confused” about what was fact and what was fiction.

Robert, on the other hand, admitted that his feelings about Doctorow’s book were much more negative than his brother’s. “There’s no accounting for taste,” he said, with a laugh.