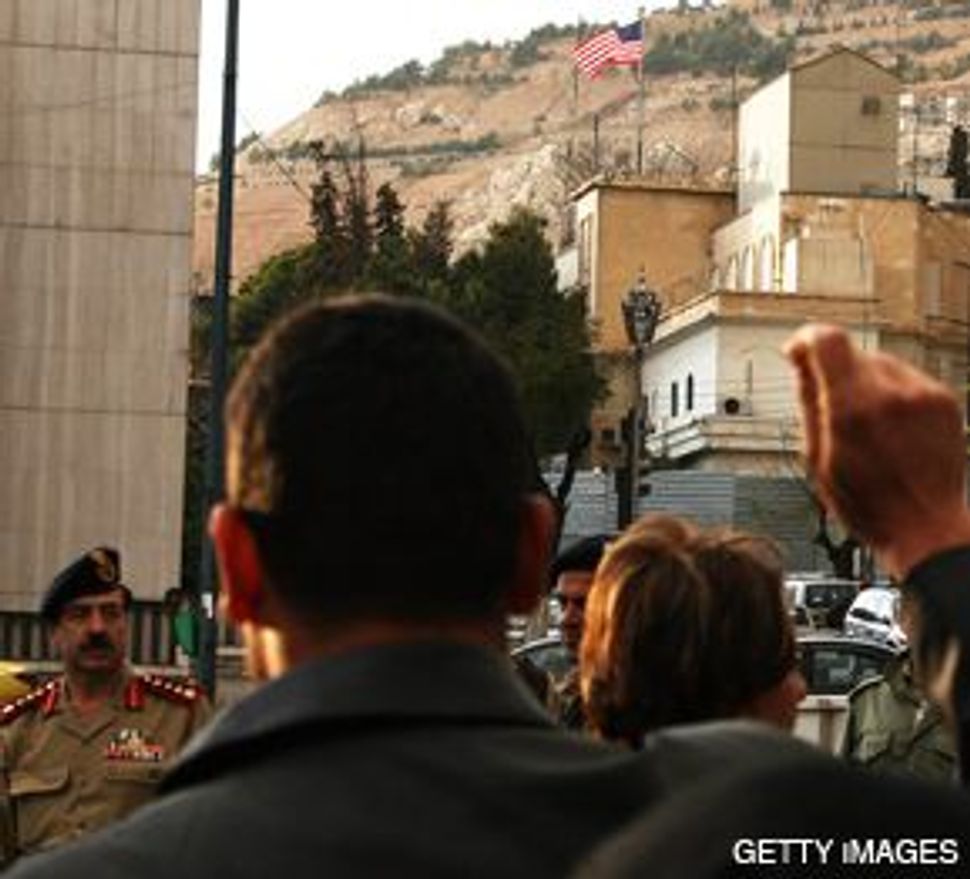 RAID RAGE: Syrian police guard the American embassy in Damascus as protesters demonstrate in the wake of an American military raid on a Syrian border town.

An unprecedented American military raid into Syria has halted a fragile diplomatic engagement between Damascus and Washington and prompted speculation that hawks within the Bush administration wanted to send a message to Syria and to the next president. 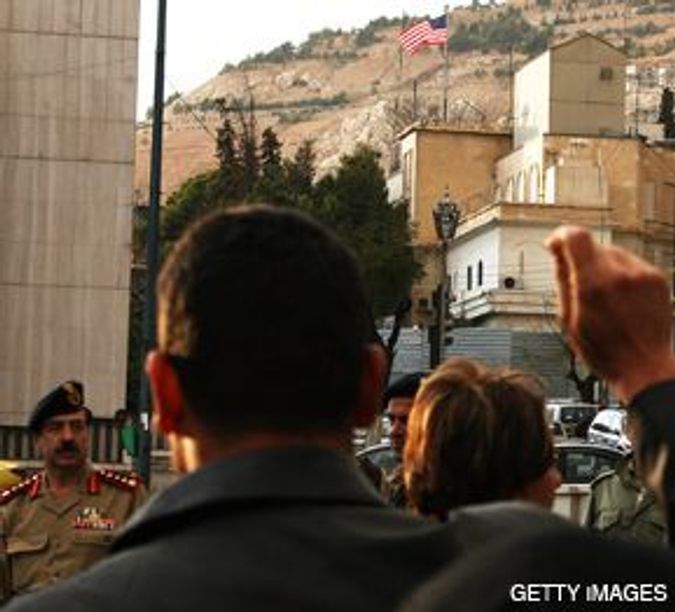 RAID RAGE: Syrian police guard the American embassy in Damascus as protesters demonstrate in the wake of an American military raid on a Syrian border town.

The operation was conducted by American military helicopters against an alleged Al Qaeda-linked network funneling fighters and weapons into Iraq. Damascus alleged that the raid on the border town of Sukkariyeh left eight civilians dead. In response, Syria shut down two American institutions in its capital and sent a formal letter of protest to the United Nations.

While American officials said after the October 26 raid that it was launched as a result of Syria’s unwillingness to crack down on smuggling rings fueling the insurgency in Iraq, the decision comes at a time when Syria has opened diplomatic channels with Israel, improved relations with Europe and for the first time exchanged ambassadors with the American-backed Lebanese government. In late September, Secretary of State Condoleezza Rice met with her Syrian counterpart Walid al-Moallem on the sidelines of the United Nations General Assembly in New York.

“Although U.S.-Syrian relations are not as bad as before, there are certain elements in this administration that still want to pop one to the Syrians,” said Murhaf Jouejati, a Syria expert at George Washington University.

Both France and Russia expressed concerns about the raid and the loss of life. Syria announced it would close an American school and a cultural center in Damascus and indefinitely postpone Syrian-Iraqi talks on regional cooperation that had been scheduled for November 12 in Baghdad.

U.S. officials said special operations forces entered Syria in an attempt to capture Abu Ghadiyah, a senior Al Qaeda leader who has been in charge of the Syrian network since 2005. The officials said he was killed or injured during the operation. The U.S. Treasury Department has named Abu Ghadiyah, whose real name is allegedly Badran Turki al-Mazidih, as one of four major figures in Al Qaeda’s Iraq wing believed to be living in Syria.

Washington has for years complained about Syria’s tepid efforts to patrol its long desert border with Iraq. Tensions between the countries escalated in 2005 after a car bomb killed Lebanese Prime Minister Rafik Hariri. Washington accused Damascus of masterminding the operation and withdrew its ambassador to Syria.

Over the last year, however, the State Department has pushed for more engagement with Syria. At the same time, Syria has improved relations with several European capitals and opened peace talks with Israel via Turkey. In May 2007, Rice made an offer to her counterpart Moallem to resume intelligence cooperation. Damascus insisted upon the return of an American ambassador to restart the cooperation, a condition Washington rejected.

In addition to the State Department, some military commanders on the ground in Iraq have also tried to engage Damascus in order to elicit more action on border penetration into Iraq. Late last year the then-commander of American forces in Iraq, General David Petraeus, praised Syria’s cooperation in reducing violence in Iraq.

But the situation has grown tenser on the ground recently. In the days preceding the raid, Major General John Kelly told reporters that Iraq’s western borders with Saudi Arabia and Jordan were fairly tight as a result of good policing by security forces in those countries, but that Syria was a “different story.”

Joshua Landis, co-director of the center for Middle East Studies at the University of Oklahoma, said the decision to go inside Syria was taken at the highest level of the military command, but also has political ramifications — namely, to take advantage of the narrowing window of opportunity in Washington.

With the election so close, and Obama ahead in the polls, “perhaps the Joint Chiefs of Staff thought it was a now or never situation,” he said.

“The larger context is the failure to establish proper relations with the Syrians, which is in no mood to give anything to the Bush administration now and is waiting for a new administration.”

In addition to the impending political transition in Washington, the elections in Israel have essentially put the talks between Israel and Syria, mediated by Turkey, on hold. Its main backer, acting Prime Minister Ehud Olmert, has been sidelined and his successor, especially if it turns out to be Likud leader Benjamin Netanyahu, is unlikely to pursue engagement with Syria. This is why Steven Heydemann, a professor of political science at Georgetown University, said that although he found the raid “surprising,” he believes “given the upcoming elections here and in Israel, those making decisions about the raid might have concluded that the political stakes were, in fact, lower than they have been for some time.”