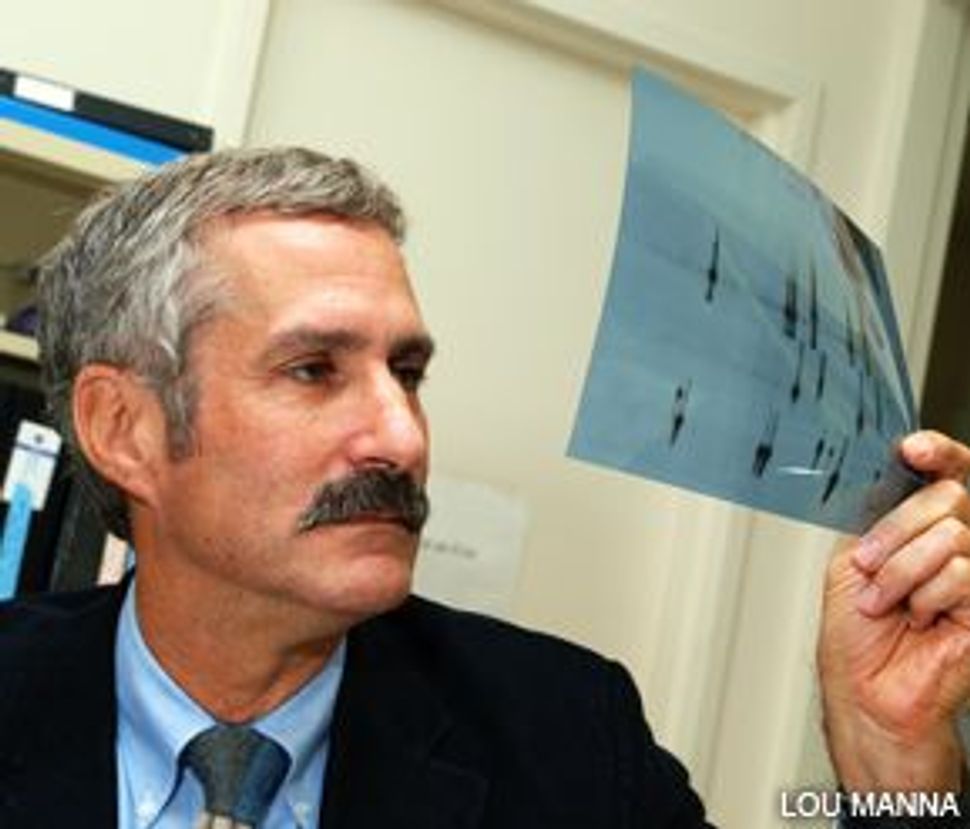 AN OUNCE OF PREVENTION: NYU Geneticist Harry Ostrer (above) is researching why some Jewish women with the ?breast cancer gene? remain healthy. ?Whatever these women have, we want to bottle it,? he said.

For researchers looking at what have become known as the “Jewish breast cancer genes,” much of the last decade has been spent identifying women who have the gene mutations and finding medical procedures to battle the breast and ovarian cancers that result. 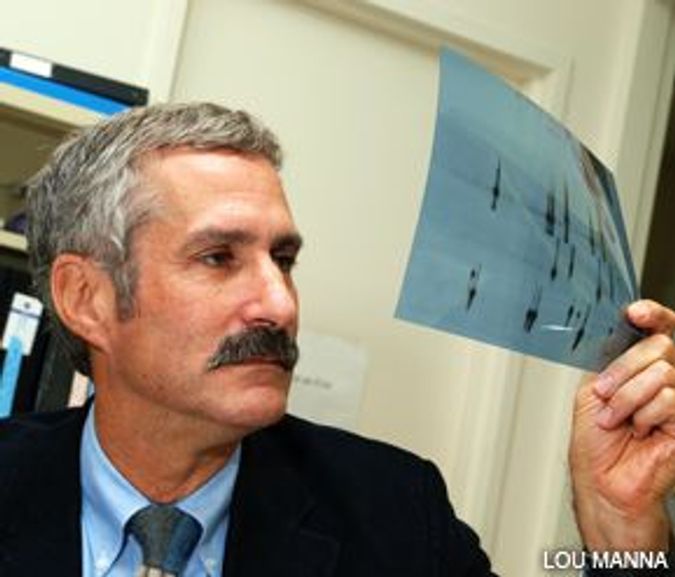 AN OUNCE OF PREVENTION: NYU Geneticist Harry Ostrer (above) is researching why some Jewish women with the ?breast cancer gene? remain healthy. ?Whatever these women have, we want to bottle it,? he said.

Now many of the same scientists are striking out in bold new directions, in search of the finer mechanics of how the gene causes cancer, and in some cases, looking at how the cancer might be prevented altogether.

“This is on the back of a lot of basic research,” said Georgia Chenevix-Trench, an Australian researcher who is one of the leaders of an unprecedented international study of the cancer that is expecting its first results in the next few months.

“The emphasis is now shifting to treating the tumors — and possibly even preventing them,” Chenevix-Trench added.

The genes, known among scientists as BRCA1 and BRCA2, are about five times more likely to be defective, or mutated, in Ashkenazic Jews than in the general population. When defective, they create a heightened risk for a number of cancers.

Since they were discovered in the 1990s, the BRCAs have been among the most heavily researched of genetic mutations, thanks, in large part to interest and funding from the Jewish community. Recently, a spotlight has been put on the growing number of women with the defect who have chosen to have both breasts removed so as to avoid virtually any risk of allowing breast cancer to develop. Significant numbers of women have also had their ovaries removed, to prevent ovarian cancer and reduce the risk of breast cancer.

Until now, though, scientists have largely been in the dark about why some women with the mutation get cancer and why some do not, as well as how the cancer-causing process might be stopped. One of the new studies that is looking for answers is the Jewish Women’s Breast and Ovarian Cancer Genetics Study, which launched in late September.

The study, which is being run out of New York University, is working from the knowledge that some women who have a defective version of BRCA1 and BRCA2 live long lives without ever developing cancer. A research team is setting out across the country to collect DNA samples from thousands of older Jewish women — at Hadassah lunches and book clubs — to determine why some of them did not get cancer. At a kickoff event in New York City, hosted by the Jewish Women’s Foundation, the lead geneticist on the study, Harry Ostrer, expressed his hopes for the study.

“Whatever these women have, we want to bottle it — we want to sell it,” Ostrer said only half facetiously, earning a laugh from the gathered crowd.

Ostrer’s study is occurring alongside the massive international collaboration headed by the Australian researcher Trench and a number of other scientists who are currently collecting and analyzing the genomes of thousands of women around the world who have mutated BRCA1 and BRCA2.

Yet another study occurring right now is testing a drug that appears to act specifically on defective cells caused by BRCA1 and BRCA2.

“What’s exciting for me is that we’ve actually been able to find a drug that can target the cancer cells that have this abnormality,” said Olufunmilayo Olopade, who is helping oversee some of the drug trials as the director of the University of Chicago’s Center for Clinical Cancer Genetics.

This flowering of new research has been made possible by a number of very recent technological developments. One of those is the ability to cheaply collect DNA samples without drawing blood. The new method makes DNA collection possible with just an old fashioned gob of spit.

“Spitting has now become the rage for genetic studies,” said Ostrer, who is the director of the Human Genetics Program at NYU.

In addition, in the past, once researchers had DNA samples, they could generally only look at a few sites on the genome such as BRCA1 or BRCA2. Scientists have recently found ways to look at a person’s entire genetic code rather than just a single site. With this new step, doctors can look at whether other genes might interact with BRCA1 and BRCA2 to cause cancer.

“We’ve gone from a time when it used to cost a dollar to look at one gene variant to where we are now, where it costs $600 to look at a million variants,” said Chenevix-Trench, who is a researcher at Queensland Institute of Medical Research.

Beyond the technology, doctors are also benefiting from the fact that BRCA1 and BRCA2 became subjects for study years before many other genetic mutations. In the research so far, scientists have concluded that the mutations are a problem because BRCA1 and BRCA2 are responsible for creating proteins that fix broken DNA stands. When the genes are mutated, the cells produce bad proteins that are unable to repair broken DNAs, and that, in turn can lead to cancer.

Currently doctors only know how to deal with these damaged cells once they become cancerous — and at that point, in order to kill the bad cells they also have to kill the normal ones, leading to the nasty side effects of chemotherapy. The long-term dream of scientists is to get in at the molecular level to somehow stop the process in which abnormal proteins are created.

While researchers agree that this is many years off, the first primitive approach at this sort of treatment is happening in trials with a new drug known as a PARP inhibitor. PARP inhibitors are currently in trials at a few hospitals for women with cancer and appear to work by causing cells with mutated BRCA genes to die off. Doctors are excited about the drug because it targets the cells with mutated genes while leaving the normal ones alone, meaning that there are few side effects. Some researchers believe the drugs could, in the future, be used with women who have the BRCA mutation but have not developed cancer in order to effectively stop the pileup of damaged DNA that leads to cancer.

“Even before the cancer cells rear them, this drug could be developed for prevention,” said Olopade. “That gives me hope.”

The larger thrust of research, though, is in the massive studies that are looking at why some women with mutated BRCA don’t develop cancer. The most ambitious is being operated out of the University of Cambridge and is known as the Consortium of Investigators of Modifiers of BRCA1/2, or CIMBA.

Some members of the consortium have already found a couple of genes that appear to interact with the BRCA genes to cause a slightly higher chance of cancer. Researchers hope they might also find genes that decrease the chance that someone with a mutated BRCA develops cancer.

“If one has a better understanding of what their cancer protective role is,” said Offit, “it could prefigure a new era of cancer prevention.”

These potential findings would not just help Ashkenazi Jews. While the genes are known as the Jewish breast cancer genes, research has found the mutations in many populations around the world, and they predispose carriers to the development of other cancers such as ovarian and prostate cancer. In addition, this research is generating discoveries that scientists hope to bring to the broader field of cancer research.

“This is one of the most exciting times in science,” said Olopade, ”because there are lots of basic science discoveries. And we are not leaving them in the laboratory. We are bringing the advances back to the patients to help them.”