Young Jews More Likely To Vote GOP Than Their Elders 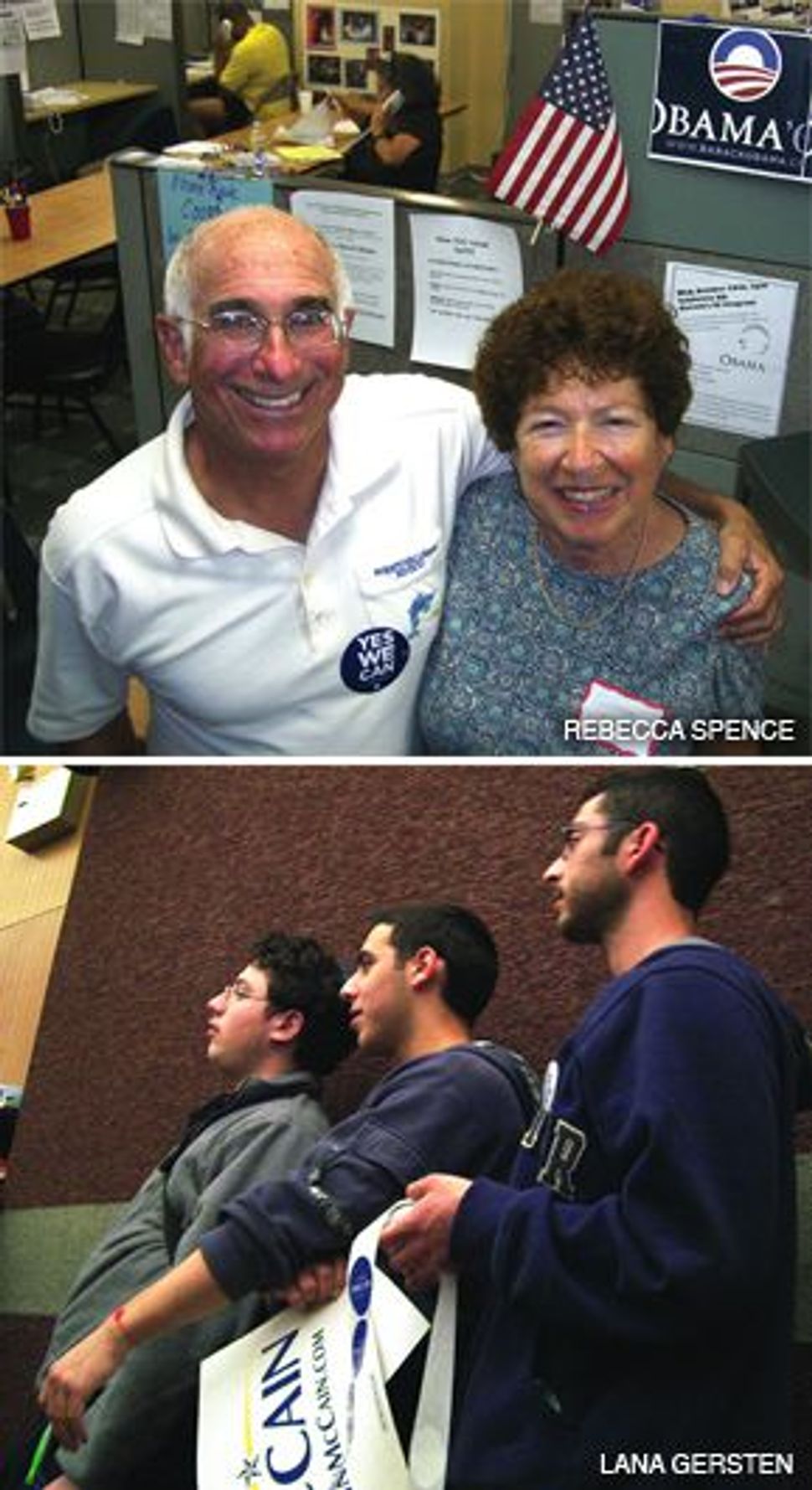 GENERATION GAP: While Warren and Glenda Finn (top) and other older Jewish Americans have turned out for Barack Obama, the news for John McCain was better at a recent political debate at Yeshiva University.

Washington — Comedian Sarah Silverman has gotten a lot of mileage out of the notion that older Jewish voters, especially those in Florida, need to be persuaded to support Senator Barack Obama. Yet as it turns out, those bubbes and zaydes may be the ones prodding their grandchildren to support the Democratic nominee for president. 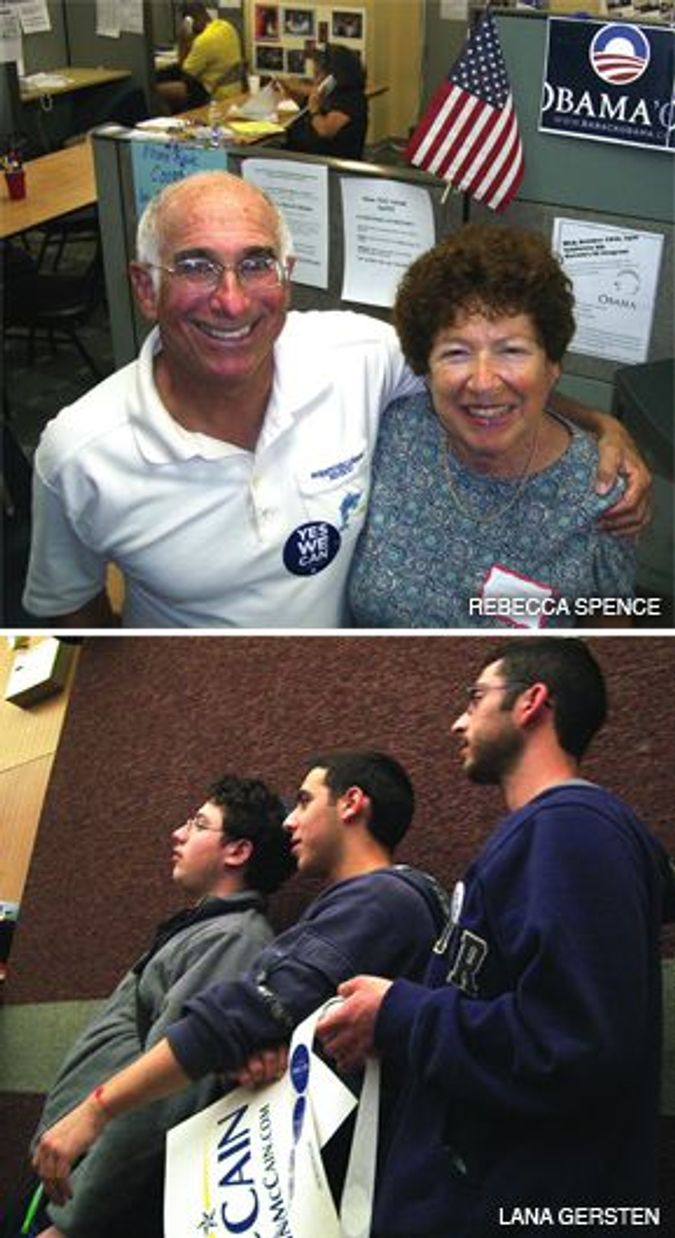 GENERATION GAP: While Warren and Glenda Finn (top) and other older Jewish Americans have turned out for Barack Obama, the news for John McCain was better at a recent political debate at Yeshiva University.

Contrary to the perception that young people are in the bag for Obama, polls indicate that younger Jewish voters are more likely than older Jews to support Republican Sen. John McCain for president. This surprising finding most recently turned up in an October 23 analysis by Gallup polls that showed growing support for Obama among all Jews, who for a long time had been cool to the Democratic nominee.

That survey, compiled from the monthly averages of Gallup’s daily tracking polls, including interviews with more than 500 Jewish registered voters each month, found that while 74% of Jews aged 55 and over were supporting Obama, only 67% of those under 35 said they’d vote for the Democratic nominee.

But this finding does fit into other data showing that younger Jews are trending conservative politically. A study of the 2004 Jewish vote by the Solomon Project, an effort to record Jews’ civic involvement, found younger voters were slightly more likely than older Jews to support Republican George W. Bush over Democrat John Kerry. That analysis found 23% of voters under 30 voted for Bush, compared to 20% of those ages 45 to 60 and 17% among the 60-plus crowd.

This finding doesn’t come as much of a surprise to voters like Zach Hanover, a 19-year-old sophomore at The George Washington University who plans to vote for McCain when he casts his first ballot. Hanover, an Orthodox Jew reared in Memphis, where his father, a Democrat, would drag him to rallies with Bill Clinton and Al Gore, said his decision to be a Republican was an easy one.

“I just made a bullet list — abortion, taxes, spending, size of government — almost word for word it was the Republican platform,” said Hanover, adding that the traditional values he shares as an Orthodox Jew fit well with the values embraced by the GOP. “If you look at the biblical liturgy, the Judaic religion is about life.”

Much of the evidence pointing to Republican growth among younger Jews remains anecdotal but fits with the broader demographic trends that Hanover illustrates. Orthodox Jews represent the fastest growing segment of the Jewish community. They have more children, tend to be younger and more conservative politically than less observant Jews. Moreover, the Russian Jewish community, which also trends on the young side, is also overwhelmingly more politically conservative. Voters who are more religiously observant, regardless of denomination, tend to support more conservative political candidates.

“When you add that up, the two most Republican segments of the (Jewish) population are younger,” said Jonathan Sarna, a Brandeis University professor who has studied the Jewish vote.

These more conservative younger Jews are frequently more free-market oriented, less tied to the big government New Deal programs such as Social Security that older generations of Jews embrace, and more hawkish when it comes to national security and Israel.

That’s certainly the case for Michael Hershkop, a 20-year-old junior at Yeshiva University, who attended a debate there on Tuesday evening between College Republicans (very well represented) and College Democrats (a far smaller group). “To me, the two most important things are foreign policy and the economy. Right now I’m with McCain,” said Hershkop.

“I know people feel that Obama isn’t good on Israel, but if you look at his voting record and everything he said, it only suggests a completely supportive attitude towards Israel, so I’m confident on that, and I think he can help the economy,” said Adina Pouko, 20, a junior from Milwaukee, who also attended the Y.U. debate.

And, she continued, “I think that there needs to be a very strong separation of church and state in this country, and I think that when you extend the Christian religion into this country, you get into scary territory. I don’t want the government intervening in any of that.”

But while younger Jews may favor McCain more than their older relatives, Jewish voters of all ages remain considerably more supportive of Obama compared to their non-Jewish peer groups.

Polling data provided to the Forward from Gallup’s daily tracking surveys showed that 67% of Jews ages 18 to 34 supported Obama compared to only 57.1% of their non-Jewish cohorts in polling from September 1 to October 21. Only 29% of Jews supported McCain, compared to 36.9% of non-Jews in that age group.

With additional reporting by Lana Gersten in New York.

Young Jews More Likely To Vote GOP Than Their Elders