An Unusual Field Trip: In Hitchens vs. God, Let the Eighth Graders Decide 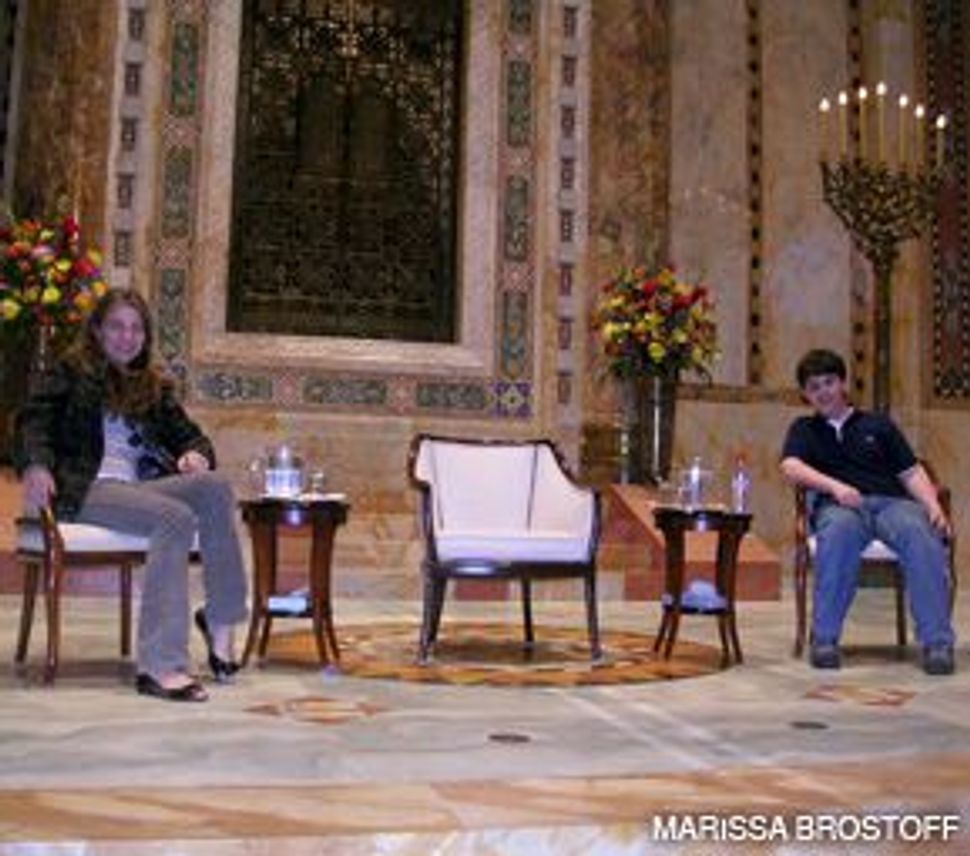 BIG QUESTIONS: Zoe Dubno, left, and Josh Kolb tried out the seats at Temple Emanu-El where Christopher Hitchens and Rabbi David Wolpe would later debate the existence of God.

Like many Jewish kids of bar and bat mitzvah age, the eighth graders at the Rodeph Sholom School in Manhattan have been asked in recent months to consider their own religious beliefs as preparation for their entry into religious adulthood. Unlike most, however, they took a field trip to a historic synagogue to see celebrity pundit Christopher Hitchens and leading Conservative rabbi David Wolpe debate the existence of God. 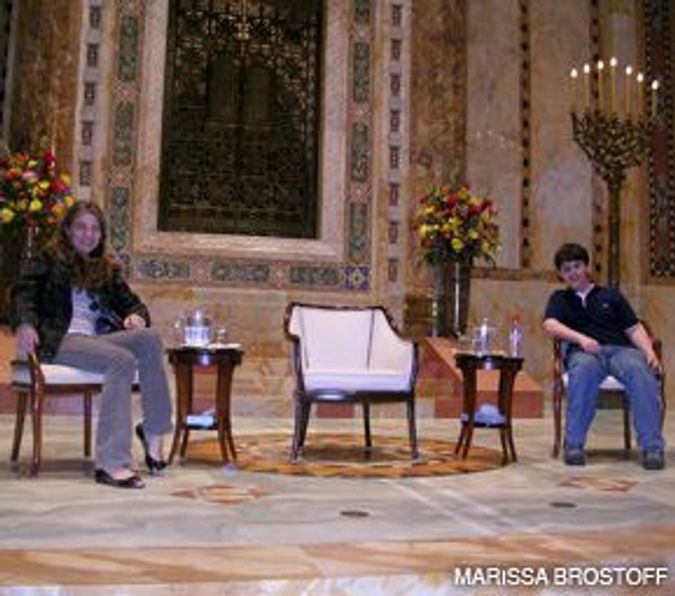 BIG QUESTIONS: Zoe Dubno, left, and Josh Kolb tried out the seats at Temple Emanu-El where Christopher Hitchens and Rabbi David Wolpe would later debate the existence of God.

his 2007 bestseller, “God is Not Great,” an anti-theist manifesto; Wolpe was promoting his book “Why Faith Matters,” published this year partly as a response to Hitchens. For nearly two hours on October 29, they strode around the bima at Temple Emanu-El, once the spiritual center of New York City’s German Jewish elite, vociferating about faith, fundamentalism and each other. Dwarfed by a high arch at the head of the cathedral-like sanctuary, they sounded thunderous, but looked tiny.

Adam Tilove, the teacher at Rodeph Shalom who played shepherd to the flock of eighth graders attending the debate, acknowledged that exposing his students to a prominent atheist—and formidable debater—was an unusual twist in the Jewish studies curriculum he coordinates. The students at the Reform day school had read excerpts from both authors’ books before the debate, at which attendance was voluntary. Nonetheless, 19 out of 25 students in Tilove’s class showed up, forming what appeared to be by far the youngest contingent in an audience of about 2,000.

“Part of this made me nervous:  Do people want to send their kids to something like this, risk their kids turning into atheists?” Tilove said. “But if Judaism can’t stand up to atheist ideas, it doesn’t deserve to exist. I don’t want these kids going to high school or college and have their minds blown, to hear, ‘We were never told about this.’”

Many of Tilove’s students, accustomed to the formal elements of debate after weeks of watching Barack Obama and John McCain square off on television, came in with high expectations. Asked whom he thought would win, Alex Fine, 13, said he didn’t know, but that he hoped that there would be a winner because, he said, “It’ll help decide this everlasting conflict.”

“Shalom,” Hitchens greeted the audience in his opening remarks. It would be an uncommon evening for him, he said, because “usually I don’t go into a house of worship without a clove of garlic around my neck.”

During the often heated, sometimes personal and frequently comical back-and-forth that followed, Wolpe alluded to Friedrich Nietzsche and Fyodor Dostoevsky, while Hitchens quoted Maimonides, whom he referred to affectionately as “the Rambam.” (As Hitchens gleefully pointed out, his mother is Jewish.) After two hours of this, it became clear that, at least for Tilove’s class, the conflict had not been everlastingly decided.

“Alex Fine and I were keeping a tally and at the end, Wolpe had 10 points and Hitchens had nine and a half,” said Zoe Dubno, also 13. “Except Alex thought it was the other way around.”

Both debaters repeatedly attempted to bolster their arguments with allegorical references to childhood. According to Hitchens, an 8-year-old could see through the preposterous idea of a creator; for Wolpe, disbelief is a marker of adolescent hubris. But some of the non-allegorical kids in the audience had more nuanced opinions.

“My aunt is a rabbi but my dad is a complete atheist,” said Miriam Zlotnik, 13. “I don’t think I’ll ever make a complete decision.”

Zlotnik thought that Hitchens “was a worthier opponent because instead of completely dissing Wolpe, he gave examples.”

For Davidson Barsky, 13, the debate only proved the futility of the debate.

“You can’t really be persuaded, it’s just whatever you believe in,” said Barsky, also 13. “I thought someone could be persuaded but really, like Rabbi Wolpe said, it’s an orientation of the soul.”

Tilove said that his colleagues at Rodeph Sholom, which he described as a “very open-minded” place, warmed to the debate-going plan as soon as Robert Levine, the rabbi at the synagogue with which the school is affiliated, responded enthusiastically. A few days after the debate, Levine led a post-mortem discussion with the eighth graders, Tilove and some curious school administrators—not forgetting to plug his own book, “What God Can Do For You Now.”

According to Tilove, the only person he had to convince of the wisdom of the field trip was an events coordinator from the Jewish Week newspaper, which organized the debate.

“She said, ‘That sounds fine and dandy, but I don’t think it’s appropriate for eighth graders. I don’t want to have kids goofing off,’” Tilove said.

Tilove convinced her that his kids were mature enough to watch the debate like adults. And indeed, when a digression about ritual circumcision led to Hitchens awkwardly making reference to male genitalia, this reporter giggled, but the eighth graders did not. Their minds were, presumably, on God.

An Unusual Field Trip: In Hitchens vs. God, Let the Eighth Graders Decide