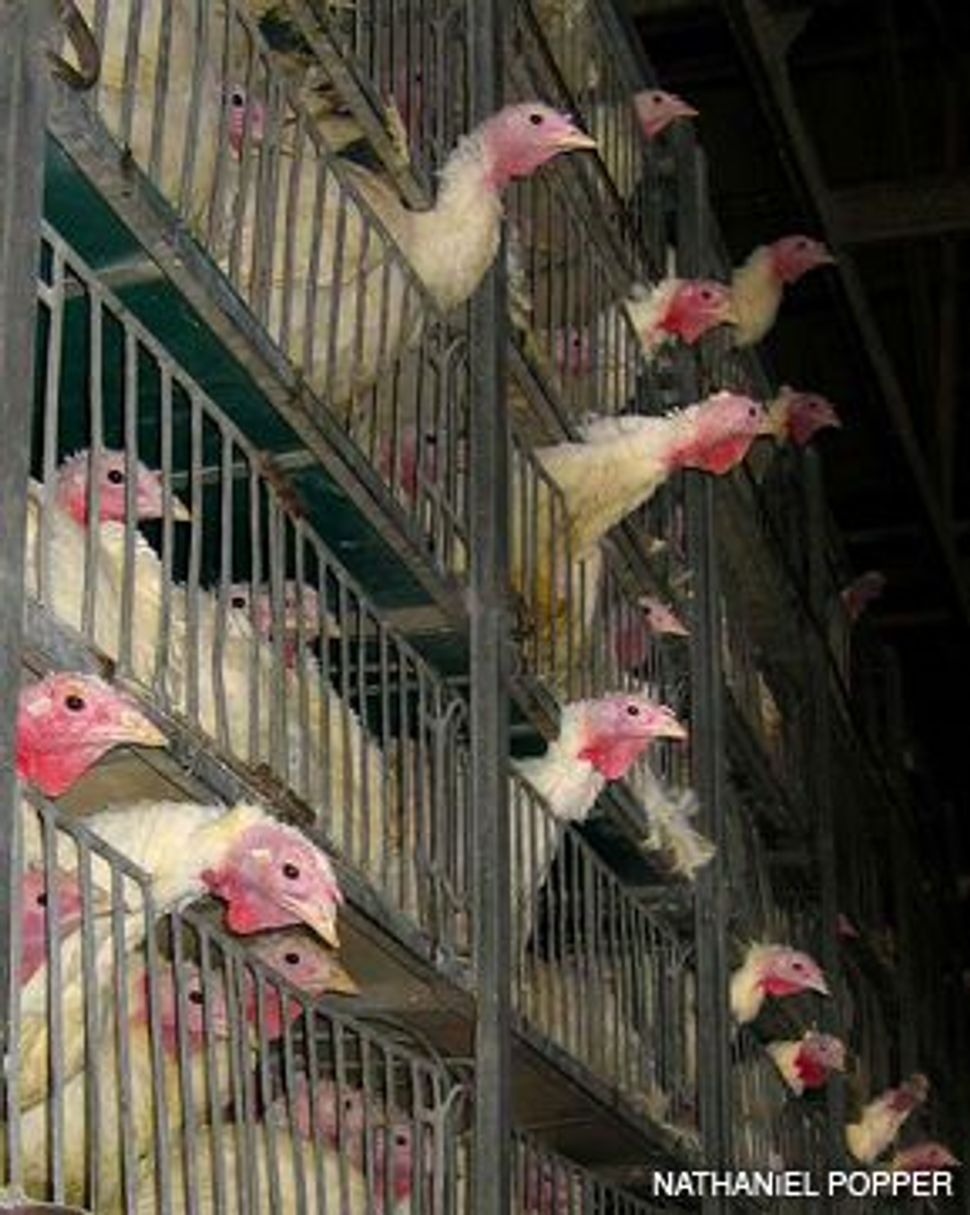 CAGED: Hundreds of turkeys were left outside the gates of an Iowa kosher meat plant as production inside came to a halt.

Postville, Iowa — In the days before the nation’s largest kosher meat company filed for bankruptcy, the company’s slaughterhouse here in northeast Iowa gradually shut down its operations, leaving angry workers without salaries or places to live, and animals caged and dying. 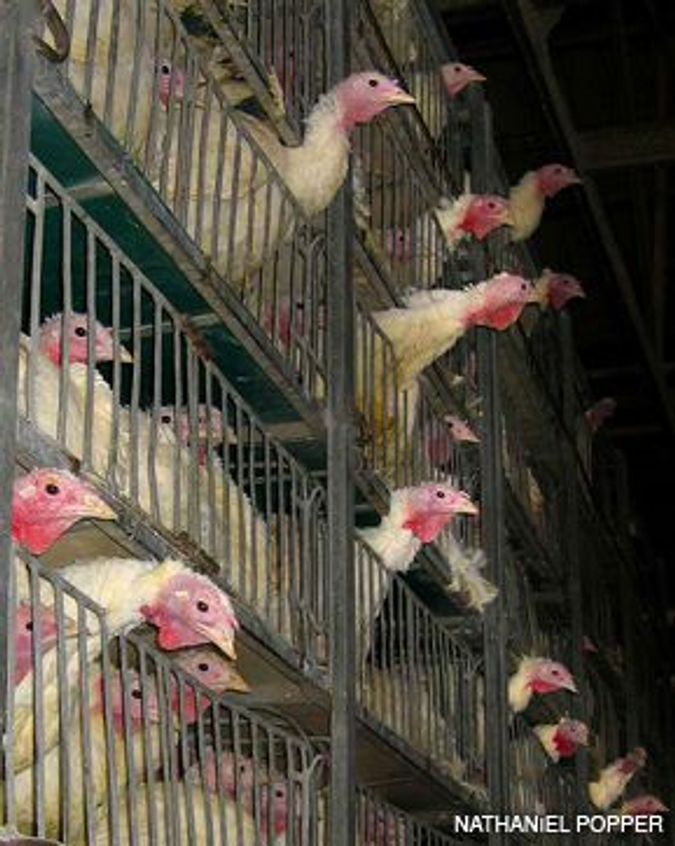 CAGED: Hundreds of turkeys were left outside the gates of an Iowa kosher meat plant as production inside came to a halt. 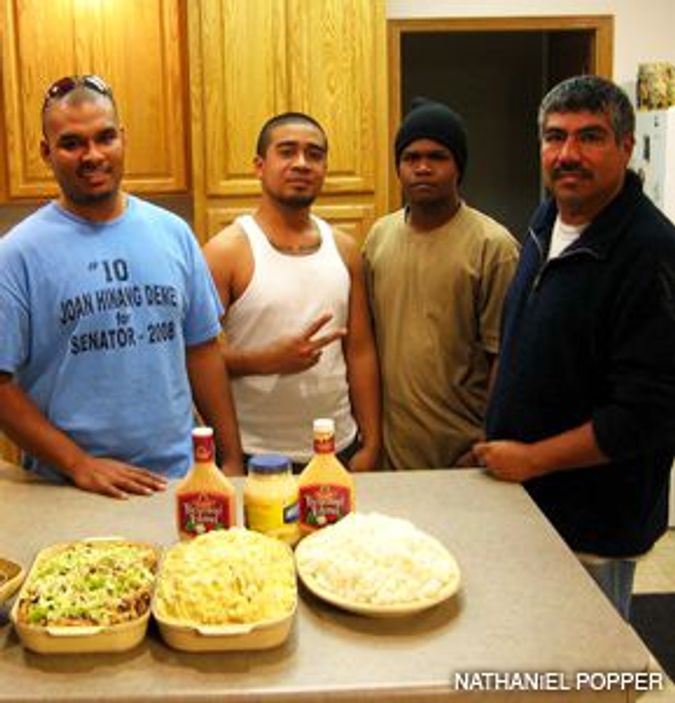 FINDING REFUGE: Three workers who came from Palau, from left, Rayvan Adelbai, Nicholson Nichola, and Pollan Paulino have been given a place to stay at the home of Elmer Herrera, right, as the kosher meat packer Agriprocessors has shed its workforce.

Around town, men and women who had come to work at the Agriprocessors plant from as far as the Pacific island of Palau and as near as Minnesota faced eviction from their apartments as the new month’s rent came due. Hundreds of workers were told on Thursday, October 30, that they were being suspended without pay, though they were given little information about why. They were not told that earlier that day, a bank had initiated foreclosure proceedings on Agriprocessors. Nor were they told that the company’s former CEO had been arrested the same day.

As the weekend wore on and company executives gathered at the plant to iron out their financial future, two tractor-trailers full of live turkeys were left sitting, with no apparent food or water, outside the company gates. Workers inside the plant reported that the chickens on the slaughter line were already mostly dead. At Postville’s City Hall, which has developed a close relationship with the company and relied heavily on the plant’s income, phone calls seeking information about the company’s status went unreturned and bills sent out by the city were left unpaid. When the company finally filed for Chapter 11 bankruptcy protection November 4, workers and town leaders were left to find out through the media, not from the company.

While drinking coffee after mass at St. Bridget’s Catholic Church, Linda Szabo, a Postville native, said, “People are really starting to realize that the company had everyone here over a barrel and they were just using us. We’ve been enslaved as much as the workers were.”

Agriprocessors has faced a long history of complaints about the way it has treated its animals and workers. Two years ago, the Forward published a report raising concerns about the treatment of workers and animals at the plant. In May of this year, federal immigration agents raided the plant and arrested nearly 400 workers on immigration charges. Since the raid, executives at the company have been hit with fines for employing underage workers and for improperly docking the paychecks of workers.

In the past, most of these complaints trickled out from workers and locals who were wary of speaking, given Agriprocessors’s financial might here in northeast Iowa. Over the first weekend in November, however, the anger at the company came spilling out from all corners as people recounted how they had been treated when the plant was operating and how they were now being treated as the company was shutting down.

“They just used us,” said Redwan Isaac, 27, a Somali refugee who came to Postville from Minnesota, as he ate at the local Mexican restaurant.

“The place is too horrible,” his relative, Osman Mohamed added. “You’ve got to live through it to understand it.”

Perhaps the clearest, and most gruesome, indications of the problems came in the company’s ongoing effort to produce poultry as the plant cut back its operations. Oscar Andres, who was working on the poultry line a day after most employees had been suspended, said that nearly half of the chickens coming down the slaughter line conveyor belt were dead — many of them rotting so completely that when he went to pick up the legs of the chickens they would fall out of the body.

“It was really terrible,” said Andres, a 29-year-old who came to work at the factory from Palau. “It’s really hard in the close conditions that we work — this bad smell was everywhere. It’s like we work and throw up at the same time. Even myself, I was throwing up. It’s really, really bad — but they never stop. They keep us going and going.”

Jeff Abbas, who runs the local radio station, said that it appeared the company had not been able to come up with the money to feed the live chickens that it still had. Paul Ouderkirk, a priest at Postville’s Catholic church, said he had been hearing reports from workers “telling us that they saw trucks of poultry sitting there for days.”

Indeed, on the evening of November 1, after the plant had been closed for more than 24 hours for the Sabbath, a reporter driving around Postville came upon two tractor trailers full of turkeys in an otherwise depopulated parking lot outside the slaughterhouse gates. The turkeys had been left with no apparent food or water. The white-plumed animals were four to a cage, and a rough count indicated that the two trucks held over 1,000 animals. A number of turkeys appeared to have already died. The trailers full of birds were in the same place early the next morning.

A company spokesman, Chaim Abrahams, was asked on November 2 about the proliferation of dead chickens on the slaughter line, to which he responded: “I have no idea.” He declined to answer any other questions.

Andres’s eyes were noticeably red and swollen, and he said he has had a persistent sickness from the conditions inside the slaughterhouse. But he said it has been the nature of his work during the plant’s last week that had been particularly distressing. In addition to the dead chickens, Andres said, most of the living chickens on the conveyor belt were still very young. “Some of them were still without feathers; like naked chickens. They’re really small, like this small,” he said, gesturing with cupped hands.

“I asked my supervisor why we are killing them,” Andres said. “He just said, ‘This is what we have.’ He wouldn’t give any more of an answer.”

By October 31, most of the few remaining line workers were Palauans, like Andres, who had been recruited from Palau directly by Agriprocessors. Most of the non-Palaun workers had been brought to the city by staffing firms under contract with Agriprocessors. Jacobson Staffing, a Des Moines, Iowa-based company brought hundreds of Somali refugees from Minnesota and took over Agriprocessors’s human resources office.

On October 30, Jacobson called a meeting for all of its employees and told them that they were being suspended immediately without pay. The bankruptcy filings indicated that Agriprocessors owed Jacobson nearly $1 million. The workers were told that Jacobson would help them find new jobs, but Jacobson’s representatives cleared out of town after the meeting and workers said they had little idea of where to turn.

“Jacobson made all these promises about jobs — and deducted all these things from our paycheck — and then they just leave us here,” said Hussein Omar, a 19-year-old who was sitting in the Postville mattress store, which was converted into a Somali social club.

A Jacobson representative said he would not comment on the situation.

The workers were faced with a number of immediate problems. Because they had been suspended rather than fired, they were unable to file for unemployment benefits. The workers were also left without a paycheck just as their November rent checks came due. During the weekend, representatives of a company that owns and manages many apartments in Postville, Gal Investments, went house to house telling workers that they would be evicted if they did not pay their rent. Workers said that when they did want to leave, Gal Investments refused to return their security deposits.

Gal Investments, which bought up property in Postville after the raid, is owned by Menahem Gabay. Calls to Gabay seeking comment were not returned.

On Monday, November 3, when Jacobson’s office was opened for a short period of time, two Somali men showed up to ask for help recovering their security deposit.

“The house, the man keep our money,” said an older Somali man who was wearing a head covering and black work boots. “We want to leave, but he keep our money. We need help.”

When the workers had first shown up in Postville, Jacobson had a close relationship with Gal Investments, setting the workers up in Gal apartments and deducting money from paychecks in order to pay rent to Gal. Now that the workers were facing difficulty with their apartments, Jacobson declaimed any responsibility.

“You’ll have to probably work that out with him, or maybe even the city,” a man behind the counter, who declined to give his name, told the Somali men. “We don’t know anything about the housing.”

The lack of work meant that groups of men were gathered all around town, trying to find a way out and airing their complaints about the company. At the house of Elmer Herrera, a local Guatemalan baker and social activist who is widely credited in town with helping dislocated workers, a group of Palauan workers spoke about the promises that had been made to them back home. The men said that Agriprocessors’ recruiters had promised them free round-trip airfare and a job that paid $10 an hour, along with free housing.

Nicholson Nichola, 20, showed a pay stub indicating that he had only been paid $9 an hour. And after a few weeks on the job, the company had asked the Palauans to sign a paper committing them to paying back $1,400, the cost of the ticket to Postville.

Nichola and two of his friends said they are now planning to move to a slaughterhouse in Nebraska, a job they found through Herrera.

“Without Elmer, we would be stuck here with nothing — no money, nothing,” Nichola said.

For residents in town, one of the primary flash points for anger was a celebration held by Jewish company executives on the night of October 30. At about the same time that the Jacobson staffing firm was suspending hundreds of workers, company executives gathered at the Postville synagogue. They were there to celebrate the release, on bail, of Sholom Rubashkin, the son of the company’s founder, who had been arrested on charges that he helped procure false identification for undocumented immigrants who worked at the Postville slaughterhouse.

“They were just flaunting their arrogance and lack of concern for anyone else in this town,” said Abbas. “I just do not understand these people.”