For Blind Rabbi, an Election Night of Mixed Emotions 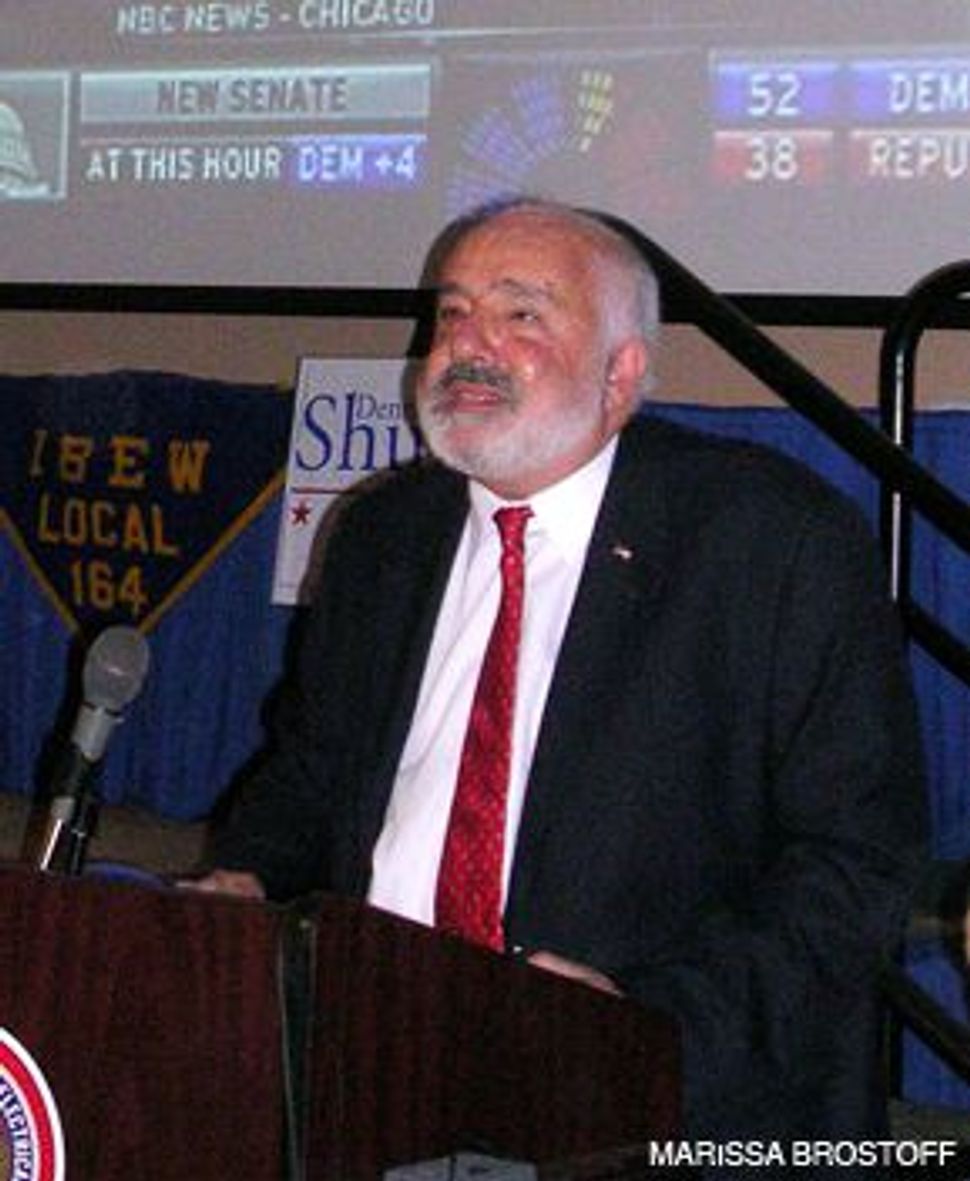 Demarest, N.J. — As polls closed in New Jersey on election night, the family of Dennis Shulman, a Democrat who ran for Congress in the state’s northernmost district, gathered around the television set — to cheer for Barack Obama. 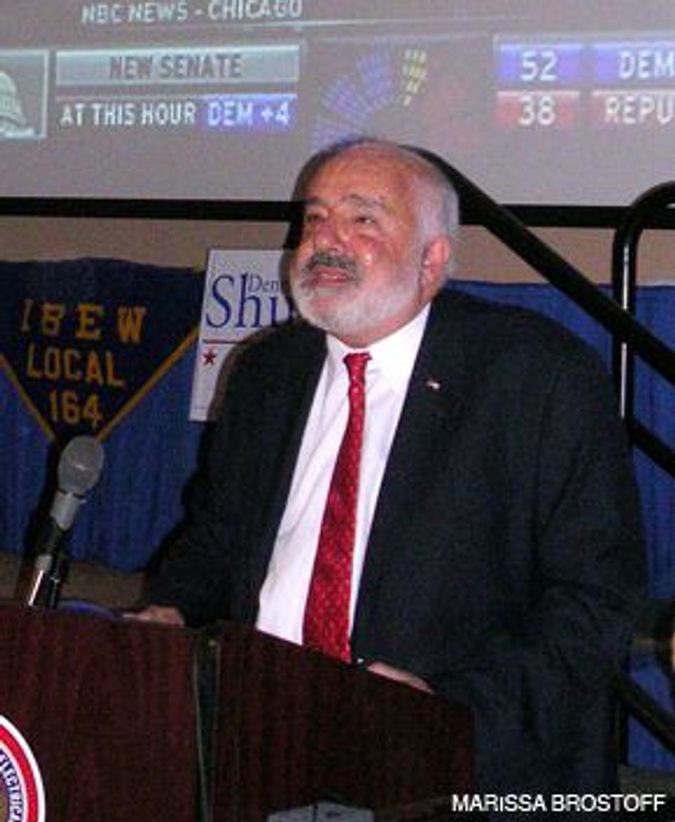 The results had not come in yet for Shulman, a blind psychoanalyst and rabbi with no previous political experience who took on the district’s incumbent Republican congressman, Scott Garrett. As the sky grew dark, the half-dozen relatives gathered at Shulman’s home seemed torn between jubilation over the Obama victory that was inching closer by the minute, and nervousness over the fate of a candidate closer to home.

With the outcome in both races still hanging in the balance, Shulman and his relatives departed for his election party, held at an electrical workers’ union hall in a nearby office park. Hundreds of people were already sitting around big tables in the brightly lit hall, munching on coleslaw and hot dogs, as CNN’s presidential coverage played on a big screen and local news, with results from Shulman’s race, blared from a smaller one.

As the evening wore on, Shulman made small talk with supporters while results trickled in — good news for Obama, and increasingly ominous news for Shulman.

By the time Shulman took the stage, at around 10 p.m., the hall was buzzing at almost a fever pitch: Obama had taken Ohio, and the presidency appeared to be his. But Shulman had his own announcement to make.

“I have some sad news,” he told the crowd. “It looks like we did not win this thing.”

The announcement brought to an end a campaign that had lasted 14 months, though from the outset, Shulman, 58, had looked like an unlikely candidate for elected office. Blind since his childhood in Worcester, Mass., he had been in private practice as a psychoanalyst since 1979. Five years ago, he completed his coursework at a nondemoninational seminary called the Academy for Jewish Religion and was ordained by an independent group of rabbis; he later published a book that combined psychoanalytic and rabbinic thought.

It was Shulman’s older daughter, Holly, who convinced her father to run. Holly has worked in politics for several years, and on election night she was in Texas managing the campaign of Rick Noriega,

a Democratic congressman making an unsuccessful bid for the Senate. Holly and her friend Jeff Hauser, former political director of the National Jewish Democratic Council, persuaded Shulman that he had a chance to beat Garrett, a social and economic conservative in a politically split district.

Not everyone was an immediate believer. Shulman’s wife, Pam, an obstetrician, said, “It took awhile for us to take it seriously.”

“I don’t think we’ve had any politicians in the family before this,” said Pam’s brother Arnie Tropper, who runs an advertising agency. “My father was president — of his synagogue.”

Shulman said that campaigning was both more enjoyable and more taxing than he had expected. “My spirit was willing, but my flesh was weak,” he said.

“I always thought I was connected to a lot of people as a rabbi and a psychologist, but this was ridiculous,” he added. “The hours were grueling. But whenever I was exhausted, I would talk to a group of people about the issues that mattered to me and be inspired again.”

Shulman’s poll numbers, though never projected at above 40%, had increased throughout the campaign season, assisted by late-term endorsements from New York City Mayor Michael Bloomberg and The New York Times. In part because of his unusual biography, Shulman received national attention from the media and became a darling of the Democratic Party.

Election day began at 6 a.m. for Shulman, when he cast his ballot. Later that morning, he made a campaign stop at a train station with Frank Lautenberg, who was successfully running for a fifth term in the New Jersey Senate. Visits to precincts in the district followed. Finally, Shulman went home to make some last-minute phone calls and prepare his alternate victory and concession speeches.

After the polls closed, Shulman gathered with his family at home, where he showered while the rest of the gang devoured a pizza. Shouts of excitement erupted from the den each time Obama won another state. Shulman’s younger daughter, Julie, a senior at the University of Chicago, checked in periodically with school friends who were standing outside the park where the president-elect later made his acceptance speech.

At the party later that night, supporters from near and far joined Shulman. Some of those who came from outside Shulman’s district were watching the election returns in Paramus because of personal connections to the candidate.

“I can’t believe we left the Upper West Side to be here!” exclaimed Esther Fuchs, a professor of political science at Columbia University and a former adviser to Bloomberg.

For others at the party, Shulman represented the spirit of exuberant Democratic activism that the Obama campaign has been credited with stirring up.

“We were so energized by our children’s reactions to Dennis — forget Obama!” said Saralinda Lichtblau, a museum educator from Haworth, N.J., whose 23-year-old son was the finance director of Shulman’s campaign. “We were at a point in this country when we thought this might never happen again.”

As the night wore on and the numbers looked bleak for Shulman, the candidate conceded. He received about 123,000 votes, or 42% of the total, in New Jersey’s 5th Congressional District.

“I’m very disappointed,” Lichtblau said. “I really thought we had a shot.”

In a phone interview the next day, Shulman described his mixed emotions. “On the one hand, it was a great night of celebration. And on the other hand, we were very disappointed,” he said.

Shulman said that it was too soon “to even think about” whether he would run again. In the meantime, he has a congregation and a private practice to attend to.

For Blind Rabbi, an Election Night of Mixed Emotions