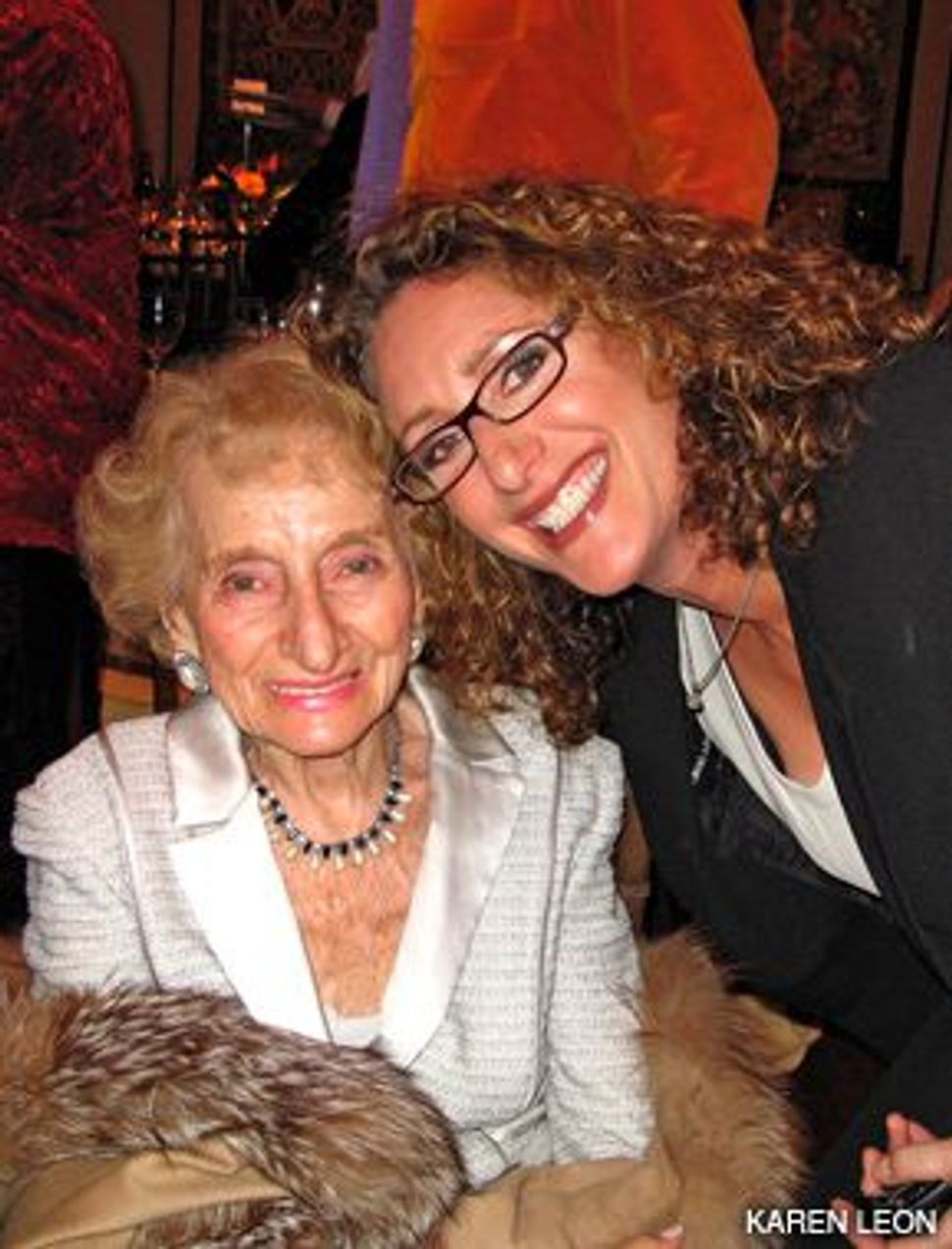 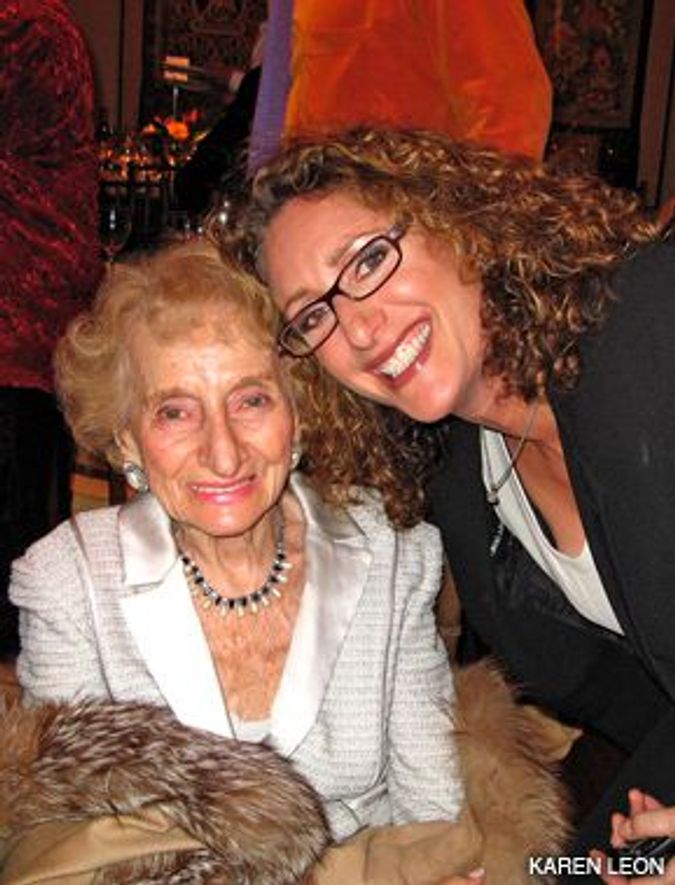 The National Coalition Against Censorship’s executive director, Joan Berlin, reminded the crowd gathered for the organization’s recent event that George Orwell had famously written that telling the truth in difficult times is a revolutionary act. At the October 21 “Free Speech Matters” dinner, held at the Rubin Museum of Art, honorees included journalist and author Anthony Lewis, publisher Barney Rosset, comedy club visionary Caroline Hirsch, TV reporter Dan Rather and 97-year-old photographer, journalist and author Ruth Gruber. “I feel slightly posthumous,” Gruber said after introduction by Victoria Wilson, vice president and senior editor at Alfred A. Knopf, Inc. Still miffed after a 60-year-old snub by The New Yorker, Gruber recalled how then editor William Shawn had sent her eyewitness story about the ship “Exodus” to the printers (“to be run in a single issue!”) when magazine owner Raoul Fleischer, in a hold-the-presses moment, ordered: “‘We can’t print that story in The New Yorker. It’s too Jewish!’” Describing the ship’s docking at Haifa, Israel, Gruber said, “It looked like a matchbox gripped by a nutcracker… 1,500 skin-and-bones people who, we were told, would be sent to Cyprus.” The next day, Gruber flew to Cyprus. “They never came! They were put on three prison ships, taken to France and Germany. The movie ‘Exodus’ opens with the Jews in Cyprus! It was a Hollywood lie!” The article was later published in three issues of The New Republic. Gruber’s book, “Destination 1948,” describing that event, was not published in Britain until December 2007, “with apologies,” Gruber added.

To the delight of the literary, word-appreciative crowd, basketball-tall comic Judy Gold prefaced her presentation to Caroline Hirsch, founder and owner of the comedy club Caroline’s on Broadway, with “F—k! The ultimate taboo against free speech!” Alluding to the comic and master word-spinner, Gold said, “George Carlin, whose history-making lawsuit and battle” vis-à-vis the (obscene) “seven words verboten on TV” have made the current stand-up comedy scene possible. Gold’s expletive had them laughing at the museum. Hirsch, who in the 1980s booked such unknowns as Jerry Seinfeld, Jay Leno and Billy Crystal, stated categorically, “Comedy cannot survive intrusion by the government.”

“Censorship is an imposed veil of ignorance,” said Barney Rosset, publisher of Grove Press — the first in America to publish works by Samuel Beckett, Joan Genet, Tom Stoppard, Harold Pinter and Eugene Ionesco. In 1959, Rosset sued in federal court to publish D.H. Lawrence’s unexpurgated version of “Lady Chatterley’s Lover” and fought and won the right to publish an uncensored version of Henry Miller’s “The Tropic of Cancer.” Rosset recalled being in Shanghai in 1945, “celebrating with [Jewish] refugees who had been helped by the Japanese. At curfew, as the party ended, a Sikh soldier with a rifle approached me: ‘Good evening, Sahib. The war is over!’” Suddenly, Gold spotted author and event co-chair Judy f——g Blume.” Without missing a beat, Blume told the warmed-up audience, “In 1959, I packed a copy of ‘Lady Chatterley’s Lover’ for my honeymoon in my suitcase. It gave a young bride a hot time.”

Declaring “censorship a great danger to the First Amendment,” Rather expressed his dismay that “citizens are told, ‘We need to be careful of what we say,’” that “the First Amendment is a bulwark against tyranny for all Americans…” and that the press “is for the people… we fight for access to the corridors of power, fight self-censorship,” and apropos, cited Mark Twain: “‘We write frankly, freely, then modify before we print.’” During my chat with Rather, I recalled our first meeting in July 1982, at Grossinger’s. The Catskills resort was hosting the New York State Broadcasters Association Annual Conference. Then participants included Ed Koch and Mario Cuomo, respectively New York City’s then mayor and New York State’s then lieutenant governor, and Republican gubernatorial candidates Paul Curran and Lew Lehrman. Rather was the keynote speaker. The broadcasters crowd had to compete with world lightweight boxing champion Ray (Boom Boom) Mancini, resort tummler Lou Goldman and Yiddish comedian Emil Cohen. I sought the principals out for a clue as to “Why Grossinger’s?” Yes, accommodations had been made — mocha in coffee instead of cream; soybean substitutes for milk; a special kind of calves’ liver substituted for bacon and almost indistinguishable from the real thing, and cocktail parties with shrimpless, porkless egg rolls, which would have been the envy of many a Chinese food fancier.

So, what should Forward readers know about the candidates, and why should they care about them? Koch’s comment to me was a no-brainer. “God bless them, tell them to rush to the polls and vote.” Curran left early. Lou Lehrman thought for a moment and said, in perfectly accented Yiddish, “Tell your readers keyn khokhmes, no khokhmes” — no B.S. Cuomo took his time and posited that “Jews need a Shabbos goy, they can’t do everything for themselves… I’m your Shabbos goy. Rather chuckled and patted me on the shoulder. “I remember that summer well,” he said.

INTERMARRIEDS, THEIR CHILDREN AND GRANDPARENTS FIND A HOME IN JUDAISM, THANKS TO THE JEWISH OUTREACH INSTITUTE

“I cried when three of my Jewish friends went off to Camp Ramah,” Judaism-convert Mare Winningham said during a private chat at the October 27 Jewish Outreach Institute’s “Two Decades of Inclusion” celebration, held at the Museum of Jewish Heritage – A Living Memorial to the Holocaust. Singer-musician Winningham, with “my two buddies from Arkansas [who play] Jew-grass music,” provided the evening’s entertainment. Winningham said she left the Catholic faith when she was a teenager: “I was looking for answers to the big questions.” She said she found these “in Judaism’s emphasis on how to behave toward one’s fellow man” and in the religion’s “beautiful sense of home.” Winningham is one of America’s highly regarded artists. Her work on stage and screen and in more than 60 TV movies has earned her two Emmys and Peabody Award for Excellence in Television, plus Golden Globe and Academy Award nominations.

Adam Bronfman, the evening’s honoree, admitted that he “had not been taught the concepts of Judaism as a child.… Growing up in New York in the 1960s and ’70s,” he did not “find meaning in Judaism.” Now his Judaic portfolio includes Samuel Bronfman Foundation vice chair, member of the Hillel International Board of Governors and membership in Temple Har Sholom in Park City, Utah, where he established the Saidye Rosner Bronfman Rabbinic Chair. The Bronfman clan was represented by Edgar Bronfman, Edgar Bronfman Jr. and Samuel Bronfman II. (In the goody bag there was a copy of “Hope Not Fear,” a new book by Edgar M. Bronfman and Beth Zasloff (St. Martin’s Press), in which the former president of the World Jewish Congress and current president of Board of Governors of Hillel urges North American Jewry “to build, not fight.…We need to celebrate the joy in Judaism as we recognize our responsibility to alleviate suffering and to help heal a broken world.”

Founded in 1988, JOI has helped foster scores of Jewish outreach imperatives coast to coast. Its programs encompass opportunities for the intermarried in the Jewish community. Funded by The Samuel Bronfman Foundation, theses programs include Public Space Judaism; the Mothers Circle, an umbrella of free, educational programs and resources for non-Jewish women raising Jewish children; Empowering Ruth, a free program that supports female Jews-by-Choice; the Grandparents Circle, an education and networking program for Jewish grandparents whose adult children have intermarried, and Big Tent Judaism, which, according to promotional literature, is an “approach to the Jewish community that takes its lead from the values and vision of our Biblical forbears, Abraham and Sarah’s tent — which was open on four sides to welcome all who approach.”