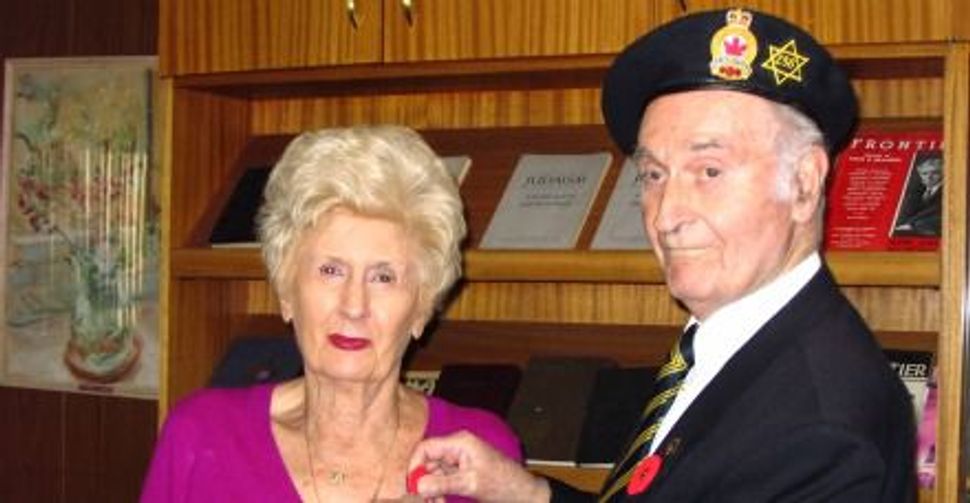 Image by Courtesy of Alan Opler 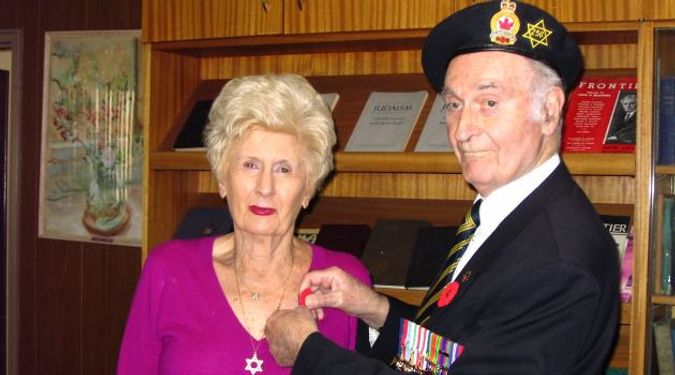 Remembering the Gone: Canadian veteran Morris Polansky pins a flower as a way of remembering slain comrades in arms. Image by Courtesy of Alan Opler

It was his beret that caught my attention — not much different from the one other veterans wear, but his had a Star of David sewn on the front.

Heading into Toronto’s subway system last Veteran’s Day, I saw him in the corner of the concourse level. I made a quick about face at the token booth and headed in his direction. I did not know this gentleman, but as a fellow Jew and the son of a U.S. Navy vet, I felt a connection.

I walked over, said hello and, before more words could be exchanged, he pinned a small plastic flower onto my coat — a poppy. Remembrance Day, as it’s known in the Commonwealth countries, is marked by the wearing of this brilliant red flower, a reminder both of the blood that was spilled at one of World War I’s worst battle scenes — Flanders Fields — and the abundance of poppies that once grew at the site.

I stood there in brief silence and thought to myself, “This scenario is backwards. I should be pinning something onto him for his service and sacrifice.”

Morris Polansky was his name. He represented the Royal Canadian Legion’s General Wingate Branch 256. His Legion post was named after Major General Charles Orde Wingate, a British army officer who was assigned to the British Mandate of Palestine in 1936. Though a devout Christian, General Wingate was a fervent Zionist and a strong believer in the rights of Jews to establish a homeland in Palestine. To this day, Israel’s premier institute for physical education and sports, Machon Wingate, is named in his honor.

It would have been appropriate and sufficient at that moment to thank Mr. Polansky for his service, to shake his hand, wish him well and be on my way. But I wasn’t ready to leave his company. I wanted to know his story — as a military man, as a Jew, but especially as a Jewish military man fighting for Canada in World War II.

There were few like him. Although an impressive 20% of Canada’s entire male Jewish population enlisted during World War II, only 17,000 out of the 1 million who fought were Jewish. Perhaps that explains why, as a child growing up in the thick of Toronto’s Jewish community, I had never met a Jewish war vet and why today, as an adult, it was such an honor.

I asked if he was from Toronto. I was sure he was not. His friendly, approachable demeanor seemed more small-town than big-city. I thought perhaps he was from one of the many tiny Jewish communities that dotted the U.S. and Canadian landscapes during the first half of the 20th century. Turns out, he was a farm boy ­— a bona fide Jewish farmer from the Canadian Prairies. How many Jewish farmers could there actually have been in Depression-era Saskatchewan?

Three, for sure — he and his two brothers, the only Jewish kids for miles and miles. His older sibling remained on the farm during the war years, while the youngest followed Mr. Polansky overseas with the Canadian Army.

Confronting a continent rife with anti-Semitism was nothing new for the Polansky brothers. They were used to such sentiments right in their own farming village. Nothing overt, but they were never made to feel they belonged among the townsfolk. Such was life in the 1930s — an era where anti-Semitism was commonplace and institutionalized throughout North America.

After the war, Mr. Polansky moved to Winnipeg, where he completed an engineering degree at the University of Manitoba. Soon, with a new bride by his side and a freshly minted diploma in his hand, he made his way to Toronto and settled in the then fledgling Jewish suburb of Downsview, where I grew up as well. He raised two daughters, served as president of his synagogue and chairman of its Hebrew school. I left Downsview many years back, but Mr. Polansky is still there, in the same house he bought in 1956.

As he spoke to me, a steady stream of people approached him. I watched intently as he pinned poppies onto others with that same meticulous precision, that same degree of purpose, as he had with me. I was beaming with pride, Jewish pride at that, for a soldier I did not even know five minutes earlier.

Toward the end of our conversation, Mr. Polansky told me he was nearing 90 years old. Impossible, I thought. He could have easily passed for someone in his mid-70s — still a strapping six-footer, square-shouldered, with perfect posture and a firm handshake.

Before I left his company, he said he hoped to be back at the same spot next year. I plan to be there too, this time to pin a poppy on him.

Lorne Opler is a Toronto-based freelance writer. His recent pieces have appeared in the Jerusalem Post and Philadelphia Jewish Exponent.