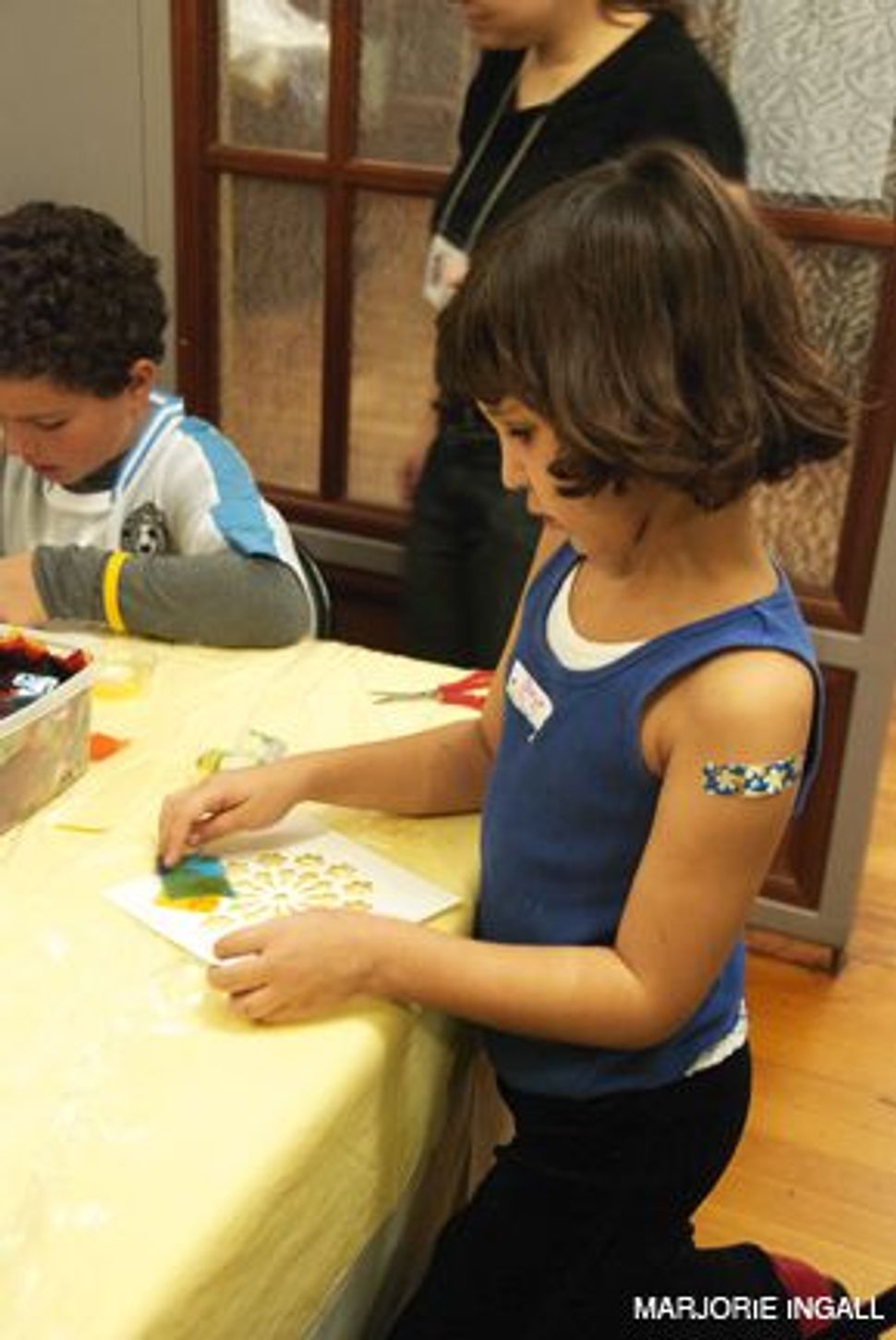 Museums are hit and miss with young kids. Josie, at 6, was enthralled by the Superheroes exhibit at the Met last summer, but Maxine, 3, was less enchanted. (She hung from my arm and wailed, “I have to leave this boring place or I am going to be dead.”) Last year, at William Steig Storybook Family Day at the Jewish Museum, Maxine had a blast designing an illustrated book with me at a crafts table, but when she spotted the guy in the massive green Shrek costume, she let out a shriek of mortal terror and clung to me like lichen. Both girls tolerated the Murakami show at the Brooklyn Museum — bright colors! Cuteness! The promise of a flower-shaped plush happy face pin at the gift shop! — though Josie and her friend Lila exploded in giggles at the statue of a huge-knockered woman jumping a rope of her own breast milk. Thankfully, the kids were oblivious to the nearby statue of the young cowboy whirling a lasso made of semen. I hadn’t read up on the exact content of the show before taking the kids. (And then I collected my parenting medal.) 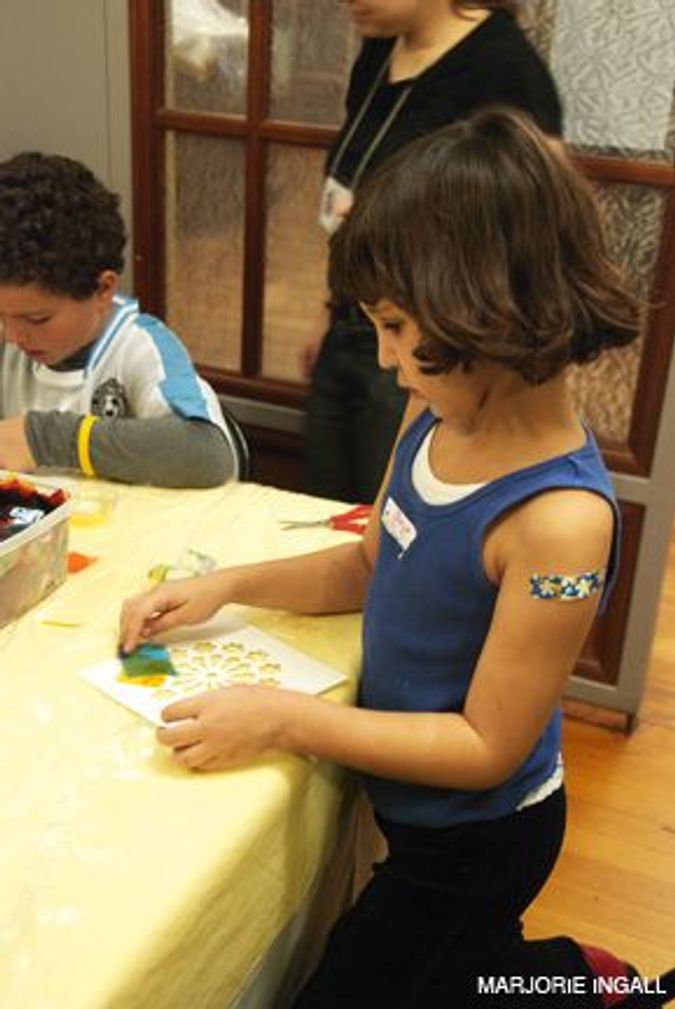 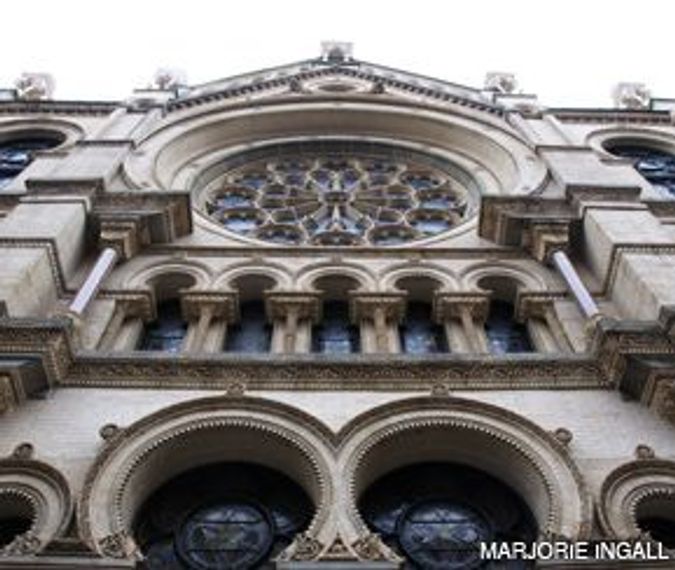 FACADE: The historic Eldridge Street Synagogue, located on the Lower East Side.

So when we visited the Museum at Eldridge Street a few weeks ago, I wasn’t sure what to expect. But Preservation Detectives, the museum’s one-hour kids’ program offered every Sunday, was a big hit with both girls. They were handed notebooks as soon as we arrived, in which to record clues about this gorgeous 1887 Moorish building on the Lower East Side. Thanks to the Backyardigans and Blues Clues, even Maxine understood how to be a detective. She looked around and squinted self-importantly, scribbling gibberish in her notebook, furtively and secretly. Our charming guide asked the seven kids on the tour to look around for clues about the building’s former inhabitants: What might the 19th-century congregants have been like? What could we learn from the worn floorboards, the narrow and steep stairs, the numbered seats in the balcony, the huge and vibrant stained glass windows?

Back in the day, of course, shuls served many purposes: they were social hubs, mutual aid societies, agents of acculturation. This one counted among its members artist Ben Shahn, singer Eddie Cantor, actors Paul Muni and Edward G. Robinson, scientist Jonas Salk. But over the years, as the tide of Jewish immigration slowed and the community moved up and out of the neighborhood, the building fell into disrepair. As the congregation shrank, parts of the shul were closed. These areas remained untouched for 30 years.

In the early ’90s, preservationists began restoring the building. The museum opened in December 2007, just in time to commemorate the 120th anniversary of the shul’s original opening. Today, the Eldridge Street Synagogue is a New York City and National Historic Landmark, listed on the National Register of Historic Places. And young visitors can get a sense of what efforts to restore the building involved, thanks to clever touchscreen displays at several interactive kiosks. As the kids moved their hands across the screen, an image of a chisel followed them, letting them “chip off” digital layers of grime, cracking the stucco and uncovering the paint underneath. They could wield a digital brush to dust off and restore the image, and when it was sufficiently clean, the image of a cloth appeared to polish the wall. They could also watch old moving images, while the guide coached them about what the films revealed, what the neighborhood must have felt and smelled like back then.

And antsy little people didn’t have to stay still for too long. The group traced clues throughout the building, gazing up at the 70-foot vaulted ceiling and hand-stenciled walls, peering over the balcony of the women’s section and pondering what it might have been like to sit up there, back in the day. They then trooped back downstairs to do crafts projects. They made photo collages using colorful images of today’s Lower East Side. Josie busily cut out pictures of Chinese food menus and neon donut signs, while Maxie told me what she wanted cut out (she is no more trustworthy with sharp blades than Sweeney Todd) and then glued things hither and yon. Girlfriend loves the glue.

The kids then made “stained glass windows” by taping bits of cellophane to the back of cardboard cutouts shaped like the sanctuary’s impressive central window. (Another window was blown out in the hurricane of 1938 and replaced with clear glass bricks, which remain, as do patches of peeling, crumbling wall, allowing viewers to see some of the building’s history in its unrestored elements.) By the end of the tour, Maxie was getting fidgety, but we shut her up with the promise of an artisanal donut at Doughnut Plant. Josie always picks Valhrona chocolate; Maxie goes for the vanilla bean; I’m partial to the tres leches. We then completed the holy trinity of Lower East Side noshing — pickles at the Pickle Guys (alas, old-school loyalists: the pickles there are tastier than those at Gus’s) and bialys at Kossar’s, and strolled back home by way of Orchard Street, blissfully closed to traffic on Sundays.

We’ve also done the Lower East Side Tenement Museum, which I adore (also: rockin’ gift shop), but Maxine is still too young. You enter a tenement built in the 1860s, filled with tiny apartments, and learn about its residents, who represent different eras, religions and ethnicities. (You can only visit with a tour, and only with a reservation; your best bet is to check out the Web site, tenement.org, and reserve the tour you want online.) For kids, the way to go is the Confino Family Apartment tour. I took Josie two years ago. A docent informed us that we were new immigrants in 1916, visiting the home of a Sephardic Jewish family, and that we had come to ask the father for advice about work and getting settled in the neighborhood. The father, alas, was not home, so we chatted with his teenaged daughter, Victoria, played by a very funny costumed interpreter. She whispered advice to us about cheating the apartment’s water meter (she suggested we carve fake tokens out of ice, but not too often, since they’d rust out the meter’s innards), played records for us on wind-up Victrola, and informed one gentleman, dressed for the summer heat, that in America “short pants” were only appropriate for small boys. When she saw that Josie (then not quite 5) was getting shpilkes, she set her to work doing laundry in a tub with a washboard. Now that Josie has read Sydney Taylor’s “All-of-a-Kind Family” books, she’d love it even without the opportunity to wash an immigrant girl’s underthings.

We haven’t done the Ellis Island tour with the kids yet — I loved it when I went as a footloose 20-something, but the audio tour is essential, and Maxine can’t reliably wear a headset. I’d have had more fun on the Confino tour if Josie had been a little older and more patient. So we’ll wait on Ellis Island. Like the Lower East Side, it’s been there for centuries, and we have time. I don’t want to rush things.

*Write to Marjorie at mamele@forward.com. *