Riding Together on Sex-Segregated Bus 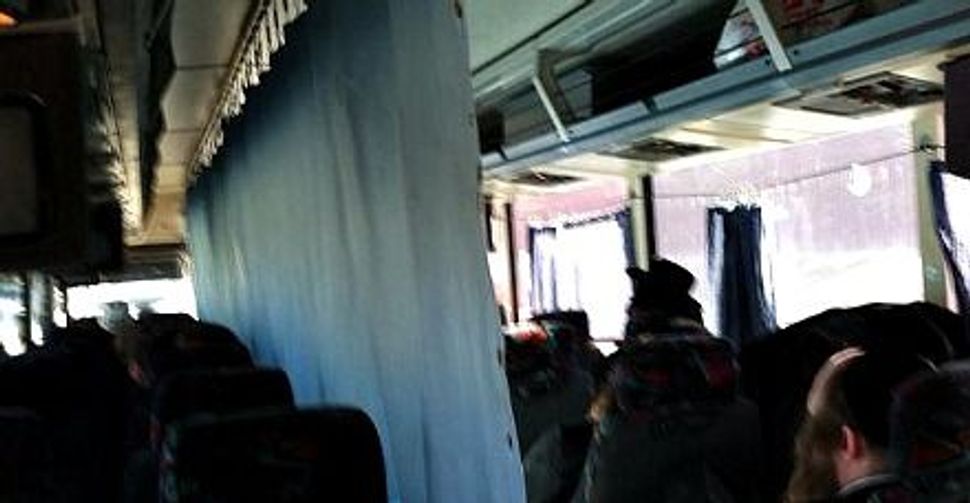 The public commuter bus between Brooklyn and the ultra-Orthodox Jewish community of Kiryas Joel has cushioned seats, small televisions and another, more unusual feature: a heavy blue curtain that hangs from the ceiling and separates male and female passengers. 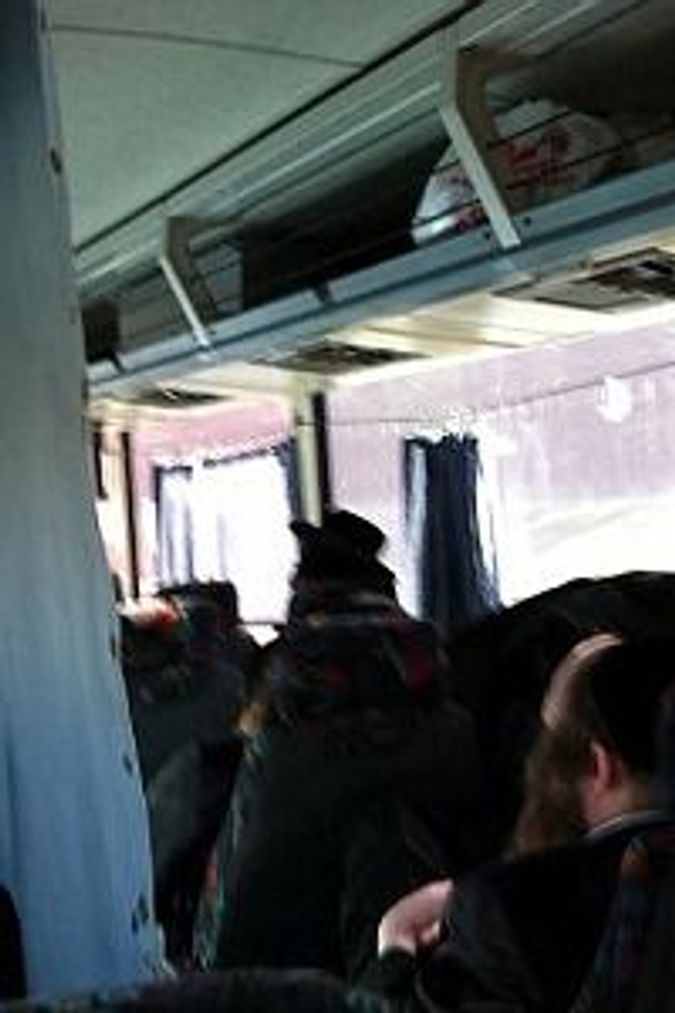 Separate Spaces: Men ride on one side and women on the other, divided by a curtain, on buses plying routes in ultra-Orthodox communities. Image by kiera feldman

On a bus ridden by reporters from the New York World and the Forward, men and women walked and sat on opposite sides of the divider which runs nearly the length of the center aisle. And a female reporter who sat on the wrong side of the divide was asked to move, though left alone when she declined.

The commuter buses are operated by Monroe Bus, a private firm that received nearly $1.6 million in government funding from the New York State Department of Transportation between 2009 and 2010 to operate commuter lines to and from Kiryas Joel in Orange County, N.Y. The sex-separated seating arrangements on publicly subsidized commuter routes — viewed by many of the ultra-Orthodox riders as an accommodation to Jewish modesty requirements — are said by one advocate to violate civil rights laws. Yet the details of how they are enforced may be crucial in assessing the practice’s legality.

“That practice is unlawful,” said Donna Lieberman, executive director of the New York Civil Liberties Union, of the curtain separating men and women on a public bus. “You can’t require separate sections for men and women any more than you can based on race or national origin.”

But Cole Durham, director of the International Center for Law and Religion Studies at Brigham Young University in Provo, Utah, said that under certain circumstances, such a curtain would not pose a legal problem. “There are a number of public settings in which we make efforts to try to accommodate religious beliefs,” Durham said.

Many Orthodox Jews adhere to modesty laws forbidding men and women who are not related from touching each other. But efforts to enforce sex segregation in public and government-subsidized spaces used by ultra-Orthodox communities are relatively new and are becoming increasingly prevalent, according to some observers.

Monroe Bus did not respond to repeated requests for comment on the sex-segregation practices on board its commuter buses, or on Lieberman’s allegation that the practice violates the law.

The evidence of sex-segregated seating on publicly subsidized Monroe Bus routes comes two weeks after the publication of a [report][2] in the New York World on a local Brooklyn public bus route that has maintained sex-segregated seating. The route is run by a private bus company that pays New York City a franchise fee for the right to do so but does not receive public funding. Following the report, the bus route’s operator agreed to end enforced sex segregation among passengers.

A male and a female reporter from the Forward and the New York World boarded a Kiryas Joel-bound Monroe Bus commuter route in Brooklyn’s Boro Park on the evening of October 27. Both sat on the men’s side of the dividing curtain of the bus. A male passenger asked the female reporter to move, calling it “a favor.” When the female reporter declined, she was not asked again.

On a Monroe Bus trip on October 28 to the Williamsburg section of Brooklyn from Kiryas Joel, a curtain divided male and female passengers in the front area of the bus. When a female reporter sat on the male-designated side behind the area divided by the curtain, no one asked her to move. On both buses, the dividing curtains were permanently affixed to the vehicle’s ceilings.

Lieberman, the civil liberties advocate, said the presence of the curtains were inappropriate. “If the curtain is the demarcation of the men’s section and the women’s section, they can’t have that on the public bus,” she said.

“Even if they don’t enforce it strictly, if you get onto the bus and have to deal with the question of whether or not you get to sit with men or women… I think it raises some questions,” said Theodore Shaw, a Columbia Law School professor and former director-counsel and president of the NAACP Legal Defense and Educational Fund. “If they were challenged [in court], I doubt they could prevail. I think they would have to stop the practice.”

“If there’s reasonable seating elsewhere that’s not aimed at discrimination or causing disparagement of the other individuals, it seems that we want in our society to have room for religious groups as well as secular groups,” Durham said.

He said that without such arrangements, ultra-Orthodox passengers might feel unable to use public buses. “Denying it may mean that they don’t have any access to the public transportation system, which is actually discrimination against them,” he said. “So you have to ask which is the greater form of discrimination.”

Both Durham and Mathew Staver, founder and chairman of Liberty Counsel, an advocacy group, said that the practice would be more likely to pass legal muster if the curtained area were in the back of the bus, where passengers had to affirmatively seek it out.

Alleged gender discrimination on publicly funded commuter lines serving heavily Orthodox communities has made the news before. In 1994, a woman named Sima Rabinowitz sued Monsey Trails, a charter firm that operates a publicly subsidized commuter line serving Orthodox communities in Orange and Rockland counties, after she was told by ultra-Orthodox passengers to leave a men’s section. The suit resulted in what The New York Times described as an “out-of-court settlement of talmudic subtlety.”

The bus company said at the time that, though it would no longer provide a curtain or ceiling hooks to hang it from, passengers could hang their own curtains if no one objected. But lawyers for Rabinowitz contended that no curtains were permitted under the settlement.

Fifteen years later, Monsey Trails says that it maintains a laissez-faire posture toward the dividers. “We just leave it up to the passengers for them to decide what to do,” said J.J. Lunger, general manager of Monsey Trails. “Sometimes they decide and put it up, and we let them do what they want.” Lunger said that drivers had been instructed not to put up or take down the dividers. Monroe Bus, on whose vehicles curtains continue to hang, is not party to the Monsey Trails agreement.

The government funds that Monroe Bus receives for commuter service to Kiryas Joel come via New York’s State Operating Assistance (STOA) program, which is administered by the New York State State Department of Transportation. The NYṢ does not yet have figures for State Operating Assistance grants awarded during 2011, but Monroe Bus remains on Orange County’s online listing of public commuter bus lines.

“The New York State Department of Transportation takes allegations of discrimination seriously,” spokesman Bryan Viggiani wrote in an e-mailed statement. “If we hear of a complaint, we follow up to ensure that STOA operators are in compliance with the law and all rules and regulations.”

According to DOT records, state officials inspected Monroe Bus vehicles 61 times in 2010 and 2011.

*Sasha Chavkin and Alice Brennan are reporters with The New York World, an accountability journalism project covering city and state government, based at the Columbia University Graduate School of Journalism. *

Riding Together on Sex-Segregated Bus