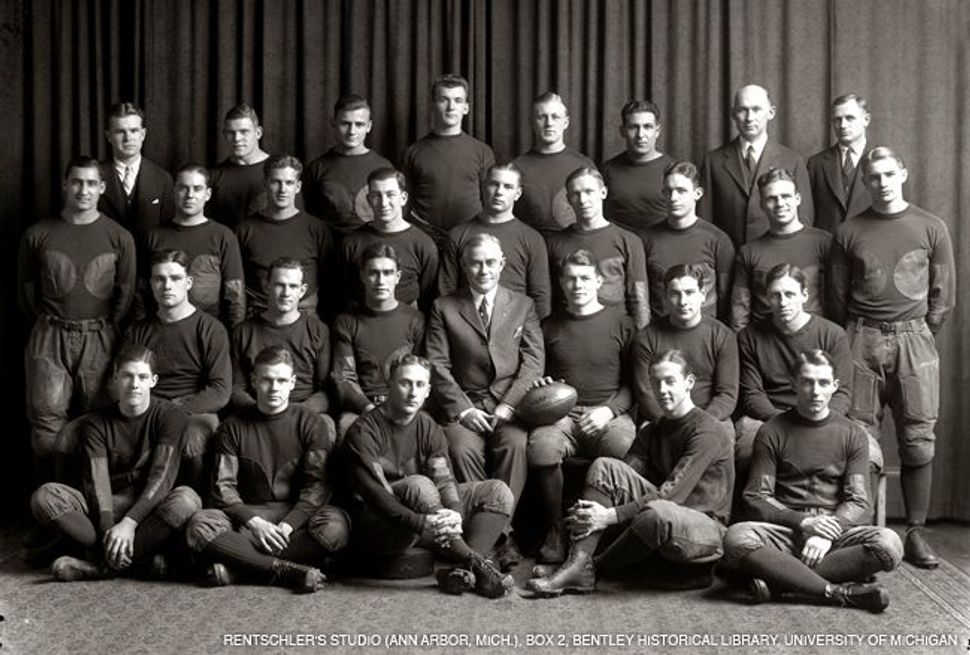 Even though he retired from pro football in 1934, Jewish quarterback Benny Friedman didn’t make the sport’s Hall of Fame until 2005. Now, Friedman has received a biography of his own.

“Passing Game: Benny Friedman and the Transformation of Football” highlights how Friedman pioneered throwing the football when the grind-it-out running approach dominated the sport.

Friedman helped change all that. In 1929, while playing for the New York Giants, he threw 20 touchdown passes — a record that stood for 13 years. Inspired in part by Friedman’s success, the NFL decided in 1934, just before his last year of play, to change the shape of the ball to make it lighter and easier to throw. Those changes helped pro football, which had been a marginal sport, begin its rise to national prominence.

“It’s not a stretch to say that in an indirect way, every quarterback who throws a pass and every wide receiver who catches one owes a debt to Benny Friedman,” author Murray Greenberg said in an interview.

Greenberg, 53, a lawyer turned journalist, decided to write the book after attending a 1998 tribute dinner to Friedman held by some of his former players from Brandeis University. Friedman worked as Brandeis’s athletic director from 1949 to 1961 and was the school’s football coach from 1951 until 1959, when the school disbanded its team.

Friedman’s rise to stardom is a classic immigrant story. The son of working-class Orthodox immigrants from Russia, he grew up in a heavily Jewish section of Cleveland. He first made headlines as a player at the University of Michigan, where he earned two-time All-American honors in the mid-1920s. After Friedman turned pro, sportswriter Paul Gallico called him the “greatest football player in the world.”

Greenberg focuses (successfully) on Friedman’s football exploits and (less successfully) on weaving his story into the context of antisemitism of the 1920s and ’30s. Less attention is paid to Friedman’s private life, although Greenberg notes that Friedman seemed unfulfilled in his later years.

Though successful in putting Brandeis on the sports map, Friedman never received the position he coveted, a higher-profile job as head coach. For years he campaigned for his election to the Hall of Fame. That induction didn’t happen during Friedman’s lifetime. Several factors could have been responsible: the early era in which he played, his large ego and his own campaigning for election to the hall. As he wrote in The New York Times in 1976, “My exploits from 1927 through 1931 and my record put me on par with or above many who are in the Hall now.” Indeed, Friedman wasn’t inducted until nearly a quarter-century after he died in 1982, when deteriorating health led him to commit suicide. After his death, some of his former Brandeis players regularly lobbied Hall of Fame voters to select their former coach.

During his career, Friedman belied the stereotype of Jews as weaklings. Like all players at the time, Friedman played both offense and defense, and although he wasn’t large, he didn’t shy away from contact. Friedman was “an absolute slab of iron,” Greenberg said. “He was a tough guy.”

Acknowledging that Friedman, unlike Hank Greenberg and Sandy Koufax, never sat out a game on the High Holy Days, Greenberg still calls him a Jewish sports hero. Friedman didn’t trumpet his Jewishness, but he also didn’t hide from it: Jewish organizations honored him, and the Jewish press touted his achievements. The newspaper American Jewish World named him one of “The Five Big Jews of 1925” who “have done the most for America within the last year.” As Greenberg puts it, “Seven, eight, 10 years before the great Hank Greenberg, there was this guy named Benny Friedman.”

Peter Ephross’s articles and reviews have appeared in The Village Voice, Publishers Weekly and in Antiques & Collecting Magazine, among other publications.