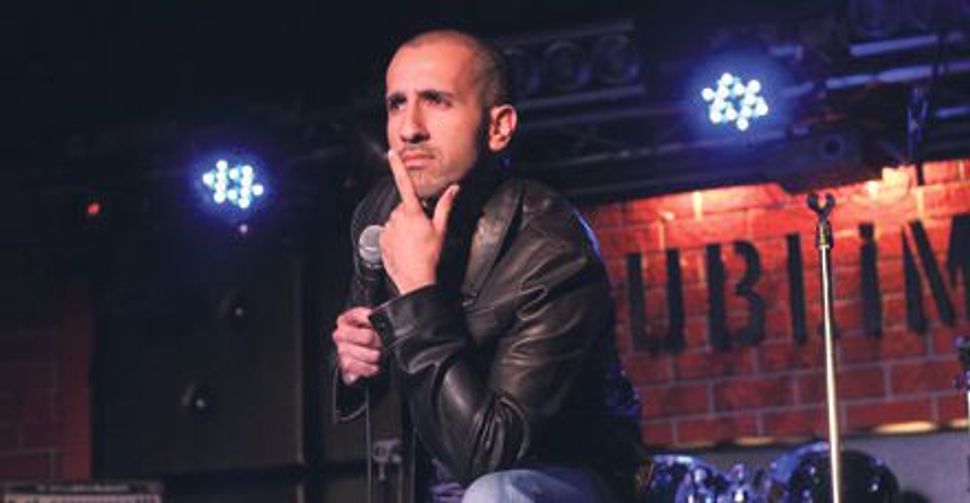 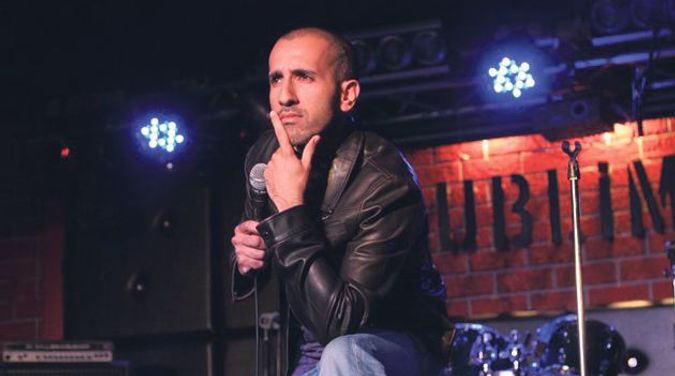 Stand-Up: Idan Mor is among a new wave of alternative Israeli comedians. Image by Courtesy of Idan Mor

In his black T-shirt and first-day-of-basic-training haircut, with weathered skin that betrays his Iranian roots, Idan Mor looks like a typical post-army Israeli. The soft-spoken Mor, however, is anything but. The 32-year-old former paratrooper and Haifa native is making a name for himself as one of the smartest and most original comics on Israel’s alternative comedy scene.

“I used to be vulgar,” Mor told me, taking a drag on his Marlboro Red. “Racist even, because that’s all I saw. Then I let go of my ego and I wasn’t afraid to bomb. Now, I talk about what matters to me.”

We were at Sublime, on Salome Street in Florentine, the hip Tel Aviv neighborhood that’s home to auto body shops, dance clubs and tattooed Israelis. Sublime is primarily a music joint, but on Sundays at 11 p.m., the club hosts a showcase of Israel’s up-and-coming alternative comics.

The reason for my attendance materialized a week earlier. I was watching television in Bnei Brak, jetlagged out of my mind after a cross-continental flight, when I happened upon a stand-up showcase similar to Comedy Central’s “Premium Blend.” Mor was the first comic up:

“I went to renew my passport, but the woman tells me she can’t, because, according to Misrad Ha’pnim [Israel’s Ministry of the Interior], I’m out of the country.”

The studio audience laughed at this painfully familiar example of Israeli bureaucracy.

Mor could have ended the bit there, but he took the joke in a different direction.

“Egypt?” “How long have I been in Egypt? ‘Six years,’ she tells me. ‘Six years?’ I say. ‘I’m in Egypt six years, and no one in this godforsaken country came to look for me?’”

His material was fresh. Most Israeli comedians talk about the same thing: the various ethnic groups living in Israel, and their respective stereotypes: Persians are cheap, Russians are thieves, Moroccans beat their wives and so forth.

I found Mor on Facebook and sent a note. Next thing I knew, I was standing with him 15 minutes before he was due onstage. I took my seat and watched as the other comics started trickling out.

After the show, Erez Birenboim, the 27-year-old producer of Sublime’s comedy series, explained, “I was sick of comics doing the same tired stuff.” We were sitting in the Sublime green room. Ten comics had done 10 minutes each with no master of ceremonies, showcasing song parodies to the accompaniment of music, offering rants on army life and, in a few cases, reading jokes straight from notebooks.

My favorite bit was one by 31-year-old Elad David:

So they say the Israeli army is a moral army because unlike other armies, we don’t rape the women we’ve conquered. This is true. But honestly — have you taken a good look at who we’ve conquered? Now, send us to war against Sweden….

I laughed at this, despite — or maybe because of — how wrong it was. But it was just the kind of edgy humor that Birenboim, Mor and the other Sublime comics shoot for.

“Ethnic humor bores me,” Birenboim explained. “And it was hurting my career. There’s only two clubs in the whole country, Camel and Comedy Comedy, and neither one will put a guy onstage unless he’s doing song parodies or the usual Moroccan-Persian-Yemenite stuff. Club owners need to make money, and they think this is what people want to see.

“So, four years ago I started Sublime. There were 25 people in the crowd. Tonight there were 200, and it’s like this every week.… At Sublime, nothing’s out of bounds.”

Back at Mor’s apartment after the show, over cigarettes and Turkish coffee, the comic, who began performing in 2005, elaborated: “Jerry Seinfeld would get his ass kicked in Israel.”

Because Seinfeld is one of my favorite comedians, I was naturally curious why he’d get his ass kicked.

“Don’t get me wrong,” Mor said. “I love Seinfeld. But Israelis would never tolerate a guy like that. He’s too slow.”

I pressed him for more.

“Look,” he said, “since 1948, Israel’s had a war every 10 years. So there’s never been a generation that knew how to relax. No matter how good things are, any minute it could blow up. You can be 35 years old, president of a high-tech company, making a billion dollars, and a week later you’re in Lebanon, dodging grenades.”

I asked him what this has to do with Seinfeld.

“Bottom line, Israelis don’t have patience. We drive fast, our food is fast: ‘Hummus-chips-salat, yallah, yallah!’ And when we go see comedy, we want jokes, immediately. No life stories, no politics, nothing intellectual. We want to make fun of people, and we want punch lines — not Yad Vashem.”

Upon leaving, I shook hands with Mor. “People all over the country talk to me after shows, or write and say they’re happy to hear someone talk about something else for a change,” he said. “It’s not enough just to be funny — not in Israel. We’re still evolving, you know? Stand-up didn’t start here until ’93. We had sketch groups and comedy duos, but not stand-up. Never just one guy, onstage with a microphone. Alone.”

Joel Chasnoff is a New York-based comedian and author of the comic memoir “The 188th Crybaby Brigade” (Free Press, 2010), about his year in the Israeli army. Visit his website at www.joelchasnoff.com.