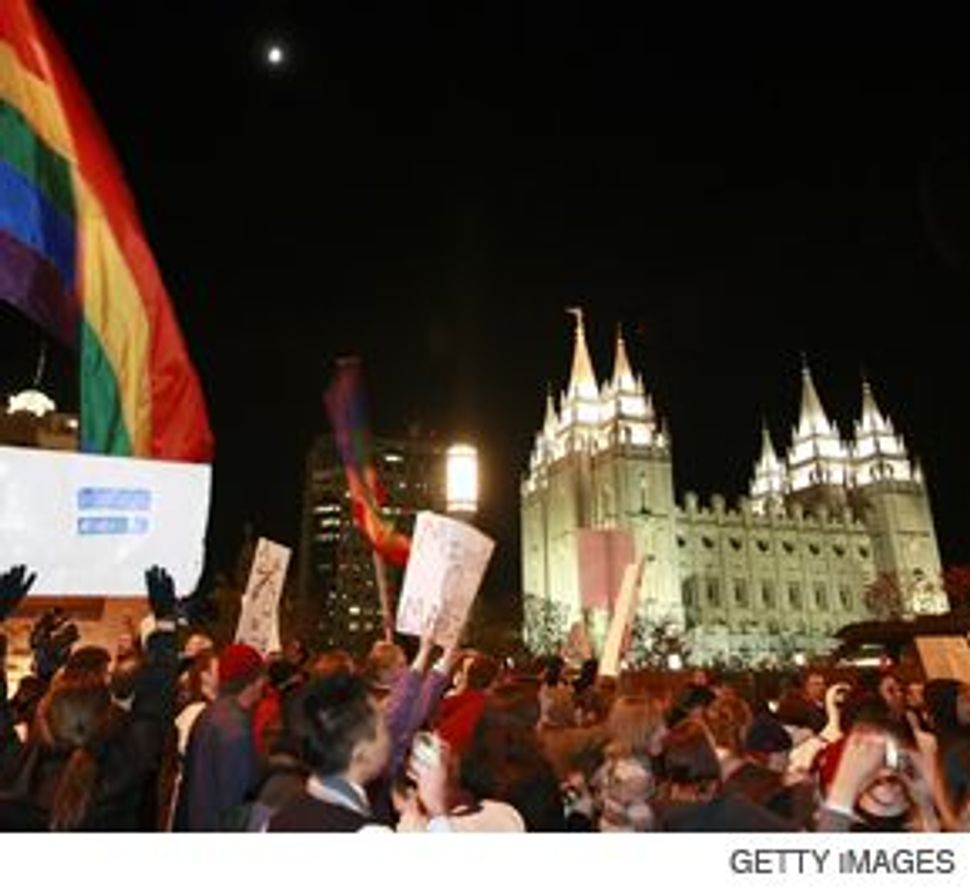 ANGER: The Mormon church has faced protests for its support of California?s Proposition 8, which banned gay marriage in the state.

Los Angeles — As opponents of California’s new gay marriage ban take aim at the Mormon Church for spearheading the campaign to pass it, a Jewish communal professional who is also a Mormon Church lay leader finds himself at the center of a growing storm in Jewish circles on the West Coast. 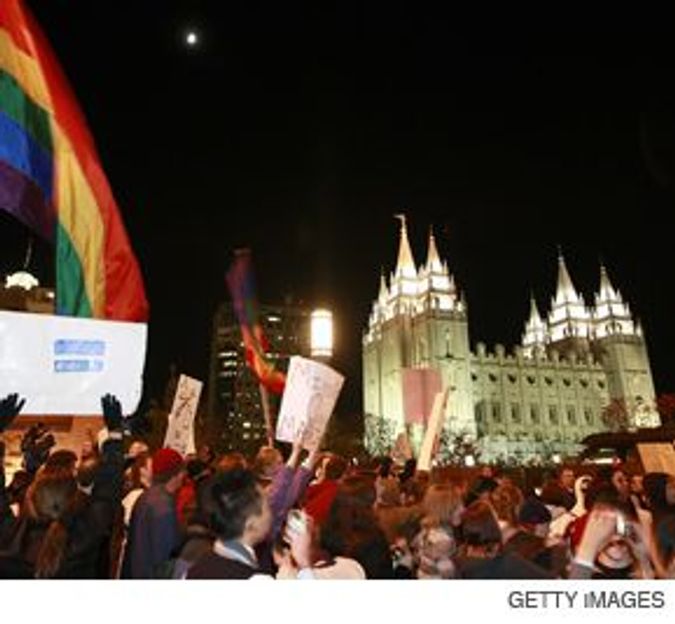 ANGER: The Mormon church has faced protests for its support of California?s Proposition 8, which banned gay marriage in the state.

Mark Paredes, the Los Angeles-based national director of Latino outreach for the American Jewish Congress, is taking heat from liberal Jews who opposed Proposition 8 — the ballot initiative that amends the California state constitution to outlaw same-sex marriage — for his outspoken support of the measure.

Paredes, who once served as a press attaché for the Israeli consulate in L.A. and speaks fluent Hebrew, has in recent years been a key liaison between the Mormon Church and the Jewish community on the West Coast. While Paredes’s defenders tout his deep and long-standing ties to the Jewish community and say he has a right to express his personal opinions, critics contend that his work at AJCongress — a 90-year-old advocacy group dedicated to protecting Jewish interests — comes into conflict with his visible support for Proposition 8.

“I’m upset with how Mark Paredes has conducted himself in the Jewish community over this issue,” said Denise Eger, rabbi of West Hollywood’s gay and lesbian Reform synagogue, Congregation Kol Ami. “He’s been so public about his support on Proposition 8, and he’s somehow expected that the Jewish community is with him on this, when 70% of the Jews voted no on Prop. 8.”

While his stance raised the ire of liberal Jews who fought hard to defeat Proposition 8, more traditional Jews who lined up in support of the initiative have rushed to defend Paredes.

“Mark was acting not on behalf of AJCongress, but acting on behalf of himself as a private citizen,” said Daniel Korobkin, an Orthodox rabbi who is the spiritual leader of L.A.’s Yavneh Hebrew Academy. “And it would be tragic if outspoken opponents of Prop. 8 engaged in witch-hunt tactics.”

On November 15, Neil Galanter, a gay Jewish musician acting on his own behalf, penned an angry letter to Paredes and to the national leadership of the AJCongress. Galanter demanded that Paredes retract his financial contribution to the Yes on 8 campaign, donate money to the anti-Proposition 8 campaign or resign his position at the Jewish communal organization.

The AJCongress did not take a position on the controversial ballot initiative. Marc Stern, acting co-executive director of the AJCongress, said he was unaware that any employee had taken “what some considered an active public role in a completely different capacity.” Stern added that the organization asks its staff members not to become publicly identified with politics or controversial issues when there’s a possibility of roles becoming confused. He said, however, that he had not made this clear to Paredes, specifically in regard to referendums.

Proposition 8, which received widespread backing from African Americans, passed with 52% of California voters in the November 4 election. According to exit polls, 70% of African Americans statewide voted for the measure. At the same time, 73% of Jews in the L.A. area opposed the ban on same-sex marriage.

The fight has now moved into the courts. The California Supreme Court, which legalized gay marriage in a watershed 4-3 ruling in May, is considering the first of six cases brought by civil rights groups and local governments seeking to override the vote.

The Mormon Church encouraged its members to contribute their time and money to support the initiative, and in the wake of its passage the church has faced a barrage of criticism from angry Proposition 8 opponents. In recent weeks, Mormon temples in California and Utah have received envelopes filled with a suspicious white powder — which turned out to be harmless — and Mormon temples across the country have been targeted by large-scale protests.

In the lead-up to November 4, Paredes emerged as a public face of the Yes on 8 campaign; his photo was splashed across the pages of L.A.’s alternative newspaper, the L.A. Weekly, in a story about the ballot initiative.

Since the initiative’s passage, Paredes has reached out to colleagues in the Jewish community in an effort to mend any fences that may have been damaged. In a widely distributed November 13 e-mail message that Paredes sent to Jewish leaders from his personal e-mail account, he wrote: “As you know, I was a supporter of Proposition 8, and am glad that it passed. Almost all of you opposed it and worked mightily to defeat it…. However, I very much want you to know that I (and other Mormons I know) do not rejoice in your anger, resentment, and frustration.”