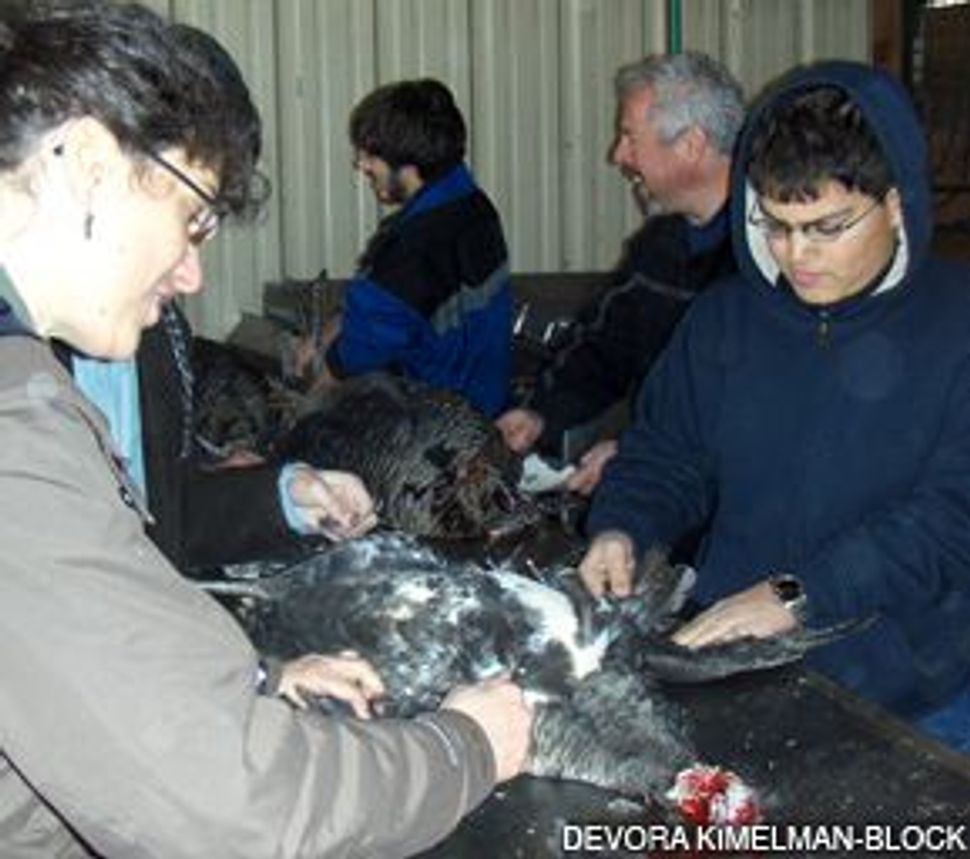 MEETING THEIR MEAT: Volunteers learned about non-industrial food production as they plucked freshly slaughtered kosher turkeys at a Maryland farm.

Thanksgiving poses new challenges in Jewish households this year, as some kosher consumers face poultry shortages, price increases and the dilemmas of supporting an industry that has made national headlines over the issue of unethical practices. 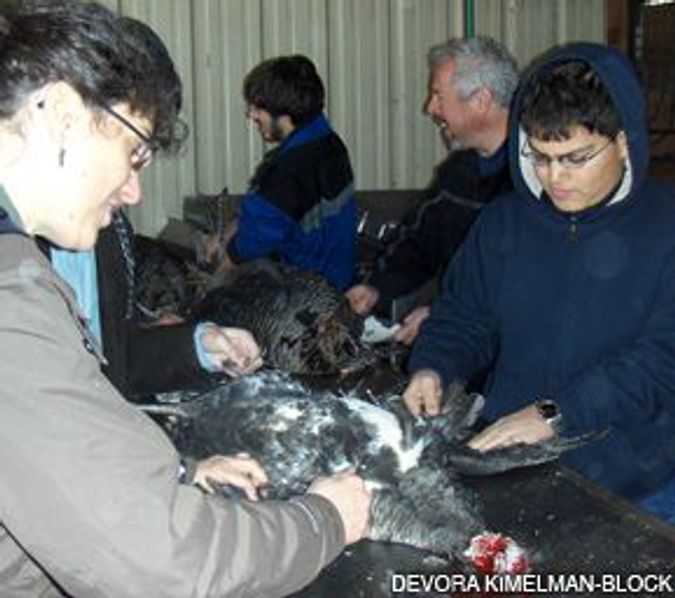 MEETING THEIR MEAT: Volunteers learned about non-industrial food production as they plucked freshly slaughtered kosher turkeys at a Maryland farm.

In New York City, one synagogue created a task force to address the ethical questions its congregants now have when buying kosher meat. In Chicago, Providence, Los Angeles and elsewhere, the price of kosher turkey rose more than it usually does before a holiday. And many say that smaller Jewish communities will be most affected.

Though the price of food in general has increased because of a number of global economic factors, the kosher food industry has experienced especially dramatic increases after the main kosher slaughterhouse of Agriprocessors, once the country’s largest producer of kosher beef and poultry, stopped production this month, after the company filed for bankruptcy.

While poultry supplies have not been hit to the same degree as beef, there have been shortages in the poultry market, said Menachem Lubinsky, a marketing consultant for the kosher industry. “In places like Florida, the Midwest and even California, there’s a real concern,” he said. “They’re telling me they’re scrambling.”

To make up for the loss, Empire Poultry, one of Agriprocessors’ main competitors, announced that effective November 24, its plant is increasing production of poultry by 50%, putting about 100,000 more chickens on the market each week. It already expanded its turkey production ahead of Thanksgiving.

“This year, demand in the market is just as great as it was, and demand on Empire is even greater, because of fewer kosher turkeys being put in the market by other producers,” said Elie Rosenfeld, a spokesman for Empire Kosher.

Meanwhile, the weakening supply of the traditional main dish of Thanksgiving has driven up prices considerably. Beverly Yusim of Chicago was astounded when she called three different stores and got price quotes ranging from $3.29 to $3.89 a pound for kosher turkeys. She remembered paying well under $2 a pound last year. Unable to beat the prices, she finally settled on a 20-pound turkey for $3.49 a pound at Jewel, a Chicago supermarket chain.

Thanksgiving is perhaps America’s most ecumenical holiday, traditionally celebrated in most Jewish homes aside from those in the ultra-Orthodox community. “Except for probably the Haredi element in the Jewish community, most American Jews take note of Thanksgiving in some way or another,” said Rabbi Morris Allen of the Conservative Beth Jacob Congregation in Minnesota.

And even if some families don’t carve a turkey on Thanksgiving Thursday, they will still roast the bird in honor of the holiday for Sabbath dinner on Friday. That population, along with nonkosher consumers who buy kosher turkeys on Thanksgiving because of the perception that the meat is of better quality and tastier, is keeping demand levels high, Rosenfeld added.

But concerns about Thanksgiving this year extend beyond turkey shortages. Some Jews have questioned the circumstances under which kosher meat is slaughtered, in light of evidence that Agriprocessors violated labor and immigration laws and appeared to treat animals cruelly.

Allen, who has been a vocal critic of Agriprocessors and created a new certification called Hekhsher Tzedek to evaluate the conditions under which kosher food is produced, has observed some members of his congregation grappling with what to do this Thanksgiving. In recent weeks, a few people have told him that they will be having a vegetarian Thanksgiving this year.

In the Bronx, Rabbi Barry Dov Katz of the Conservative synagogue Adath Israel of Riverdale gave a Rosh Hashanah sermon about the rift between practices at Agriprocessors and Jewish values. The sermon prompted members of his congregation to create a new task force to address the issue.

“I think a lot of people buy kosher because at least we were taught in Hebrew school that it’s an ethical way of doing things,” said Devora Kimelman-Block, who founded Kol Foods, a kosher, organic, grass-fed meat company. Kimelman-Block is part of a new movement to produce nonindustrial, organic, kosher meats. The movement has gained adherents in the past couple of years, in part because of rising health concerns, but largely in reaction to the issues raised by the Agriprocessors’ scandal.

“A lot of these people have been really disillusioned by what they’ve been learning about the kosher meat industry. If you are wanting to eat ethically, I think it’s a real struggle for people,” she said.

On Sunday, November 16, Kimelman-Block organized a local “meet your meat” event, in which she took 20 volunteers, including the senior class of Charles E. Smith Jewish Day School in Rockville, Md., to a Maryland farm to learn about sustainable agriculture, to meet the farmer and shochet (Jewish ritual slaughterer), and to watch as 20 turkeys were slaughtered. The volunteers then spent the entire day plucking feathers — no small task on a cold, cloudy day, but an exercise they felt was important to experience.

Two years ago, Simon Feil founded Kosher Conscience, a kosher meat co-op that produces organic, free-range poultry, because of his frustration over his “naiveté that kashrut automatically meant humane,” and because of his desire to “create a meat product that was totally in sync with Jewish values across the spectrum.”

Last year, at its first turkey slaughter, Kosher Conscience sold 25 turkeys. This year, 65 turkeys were slaughtered and sold at a costly $7 a pound, with even more demand than there was supply. Though Feil cannot solely attribute the increase to developments in the kosher food industry, he does think that Jews are becoming increasingly sensitive and aware of the food that they consume.

RoseAnn Hermann of Larchmont, N.Y., bought two organic, kosher heritage turkeys from Kosher Conscience this year. Though she was saddened to hear about the violations that took place at Agriprocessors, she wasn’t surprised.

“It’s very disappointing,” she said, “but also sort of a relief to have it revealed that things weren’t quite as humane as we might have thought, so people can become more aware and start looking for more choices.”