At UJC Assembly, Speeches About Iran and Fears About the Economy 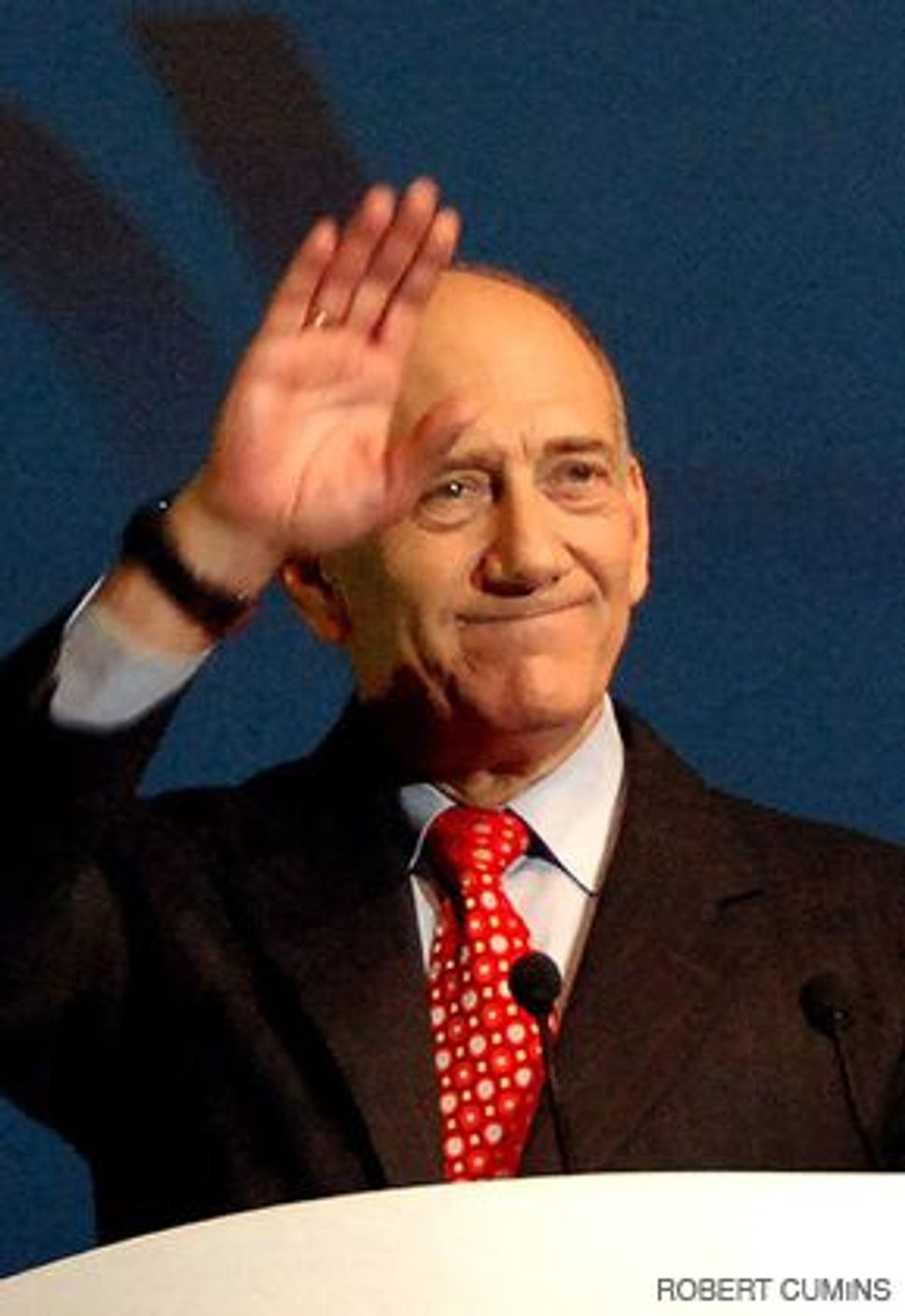 OLMERT: The prime minister made a last appearance.

Jerusalem — The 4,000 North American Jews who visited Jerusalem for United Jewish Communities’ General Assembly were treated to an all-star line up of speakers, including Israeli Prime Minister Ehud Olmert, President Shimon Peres and the leaders of the country’s three main political parties. 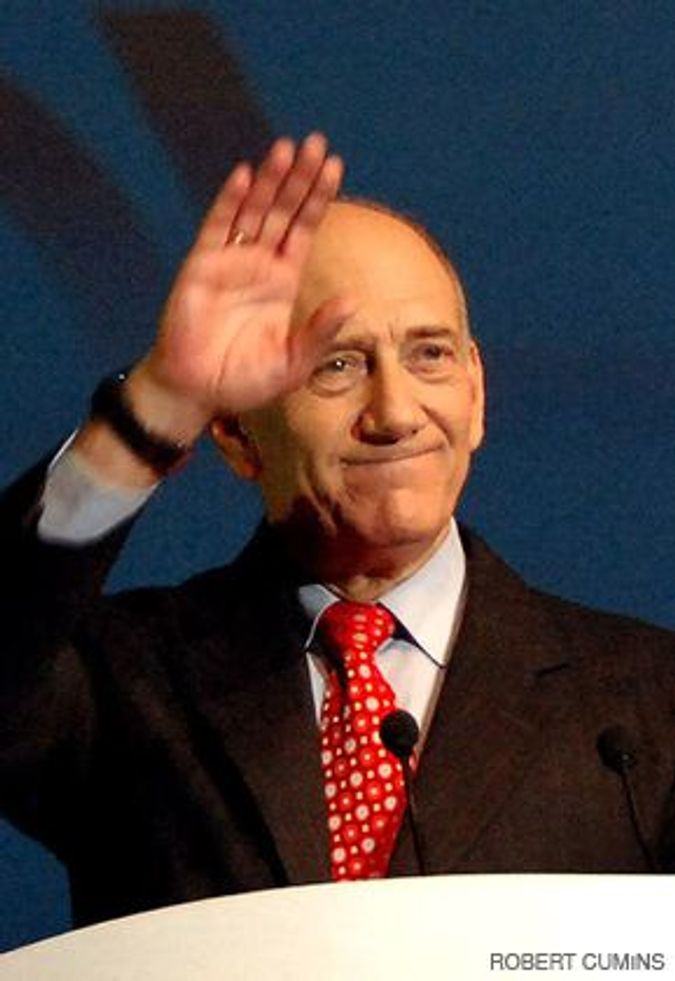 OLMERT: The prime minister made a last appearance. 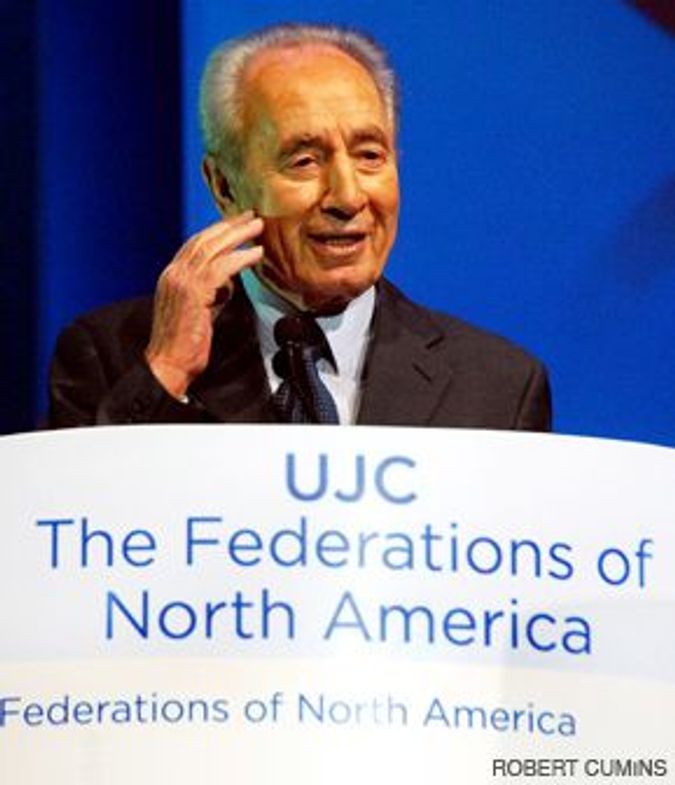 PRESIDENT: Shimon Peres spoke to the communal officials who gathered in Jerusalem for the annual General Assembly of the United Jewish Communities.

With little consensus among politicians as Israel gears up for elections, the speakers at the event, an annual convention for local Jewish federated charities in the United States and America, focused on the one subject that was easy to score points on with Jewish communal professionals: Iran. In fact, the speeches became a sort of contest for who could speak about the Iranian threat in more dramatic terms.

“Iran has not stopped its pursuit of regional hegemony and creating chaos in this tormented region,” Olmert said. “We must unite our forces as part of the international community, led by the United States of America. We must confront Iran’s malevolent diligence and thwart it with great force.”

Peres’s message was that Iran “is the only country in the world today that has imperial ambitions. Actually, they want to run the Middle East.”

Despite the focus of many speakers on Israel’s security situation, on the ground another topic was dominating the four-day General Assembly. “Everyone is very uncertain about the economic situation, and this has taken over a large part of discussions,” said Joan Lowenstein, past president and a leading member of Michigan’s Ann Arbor Jewish Federation. “It has really mirrored what happened in the American presidential election, when economics was at the center.”

The crisis apparently took its toll on attendance. In 2003, the last time the G.A. took place in Israel, 4,500 North Americans made the journey, according to figures from UJC, which is the umbrella body for North America’s Jewish community federations. This time, the figure was 4,000, but that included young people who came at subsidized rates as part of the G.A.’s Next Gen program — a group that was not present last time around. Not counting these participants, there were 3,100 North Americans.

The UJC leadership was putting on a brave face. It said that lower attendance was to be expected, because many American Jews have been back and forth to Israel this year, due to the Jewish state’s 60th birthday celebrations. On the broader issue of donations, UJC’s president and CEO, Howard Rieger, told the Forward: “One element of economic downturn is that people give based on the needs which they see. So on the one hand, while people have less, the downturn could encourage people.”

Too back up his theory about giving, Rieger used figures from the event for women donors, the International Lion of Judah Conference, which preceded the G.A. There, participants pledged $16 million — up 13% from last year. “The reality is that people are not looking at their investment statements for the last quarter — they are looking at their needs,” he said.

Rieger did accept, however, that donations are likely to drop. He said that he hopes this will be kept within the range of previous downturns — 3% to 5%.

Participants did not share Rieger’s calm approach. Rae Ringel, consultant to the Jewish Federation of Greater Washington, summed up the atmosphere as one of “fear and concern.”

The federation’s executive vice president and CEO, Misha Galperin, said that people were asking each other “how one deals with the counter-cyclical nature of a world where needs are increasing and resources from those who support what we need to do are decreasing.”

He said that participants used the assembly as a chance to share ideas for weathering the storm, such as establishing crisis funds and cutting expenses — even down to staff expenses — as his federation has done.

Traditionally, when the G.A. takes place in Israel it provides a chance for Israeli charities to woo funders with their projects. But this time, the charities were not particularly hopeful. “We are going through a kind of earthquake,” said Meir Yoffe, executive director of the Israeli educational charity Panim.

Instead, the shared preoccupation with the economic crisis gave rise to dialogue on new models of relations between American givers and Israel. “Discussions have focused on how relations between Jews in the U.S. and Israel will change in the light of economic changes,” Lowenstein said. “There’s lots of talk of enabling Israelis who have made a lot of money to turn to philanthropy and join us in our efforts.”

This is not an entirely new idea in federation circles, but the feeling was that the downturn will act as a catalyst to make this approach widespread. “In times of crisis, things can move quicker,” Galperin said.

Lively discussions took place in a session on “Global Fundraising Opportunities in a Dynamic Overseas Landscape.” Toni Young, chair of global operations at UJC, spoke about new programs, including the recruitment of 10 Israeli and 10 American donors who will each contribute $100,000 and come together to decide how the money should be spent.

Some Israelis even went so far as to say that Americans should respond to the slowdown by stepping back from some projects.

“On issues that are already on the agenda of Israeli philanthropists, the UJC should reduce [funding] and focus on areas where they can fill a niche and make a more meaningful contribution,” Yoffe said. He said that the G.A. was proving to be a forum conducive for conversations on this topic.

But not everybody found the discussions so constructive. “They have been on a level of vague platitudes — but nobody expects the G.A. to be anything but a greet-and-shmooze,” said Jay Shofet, director of the New Israel Fund’s arm Shatil. “For Israeli NGOs, the slowdown is a huge situation, but it feels like for the federations, it is just a bump in the road.”

At UJC Assembly, Speeches About Iran and Fears About the Economy