Cooking Up a (Healthy) Storm 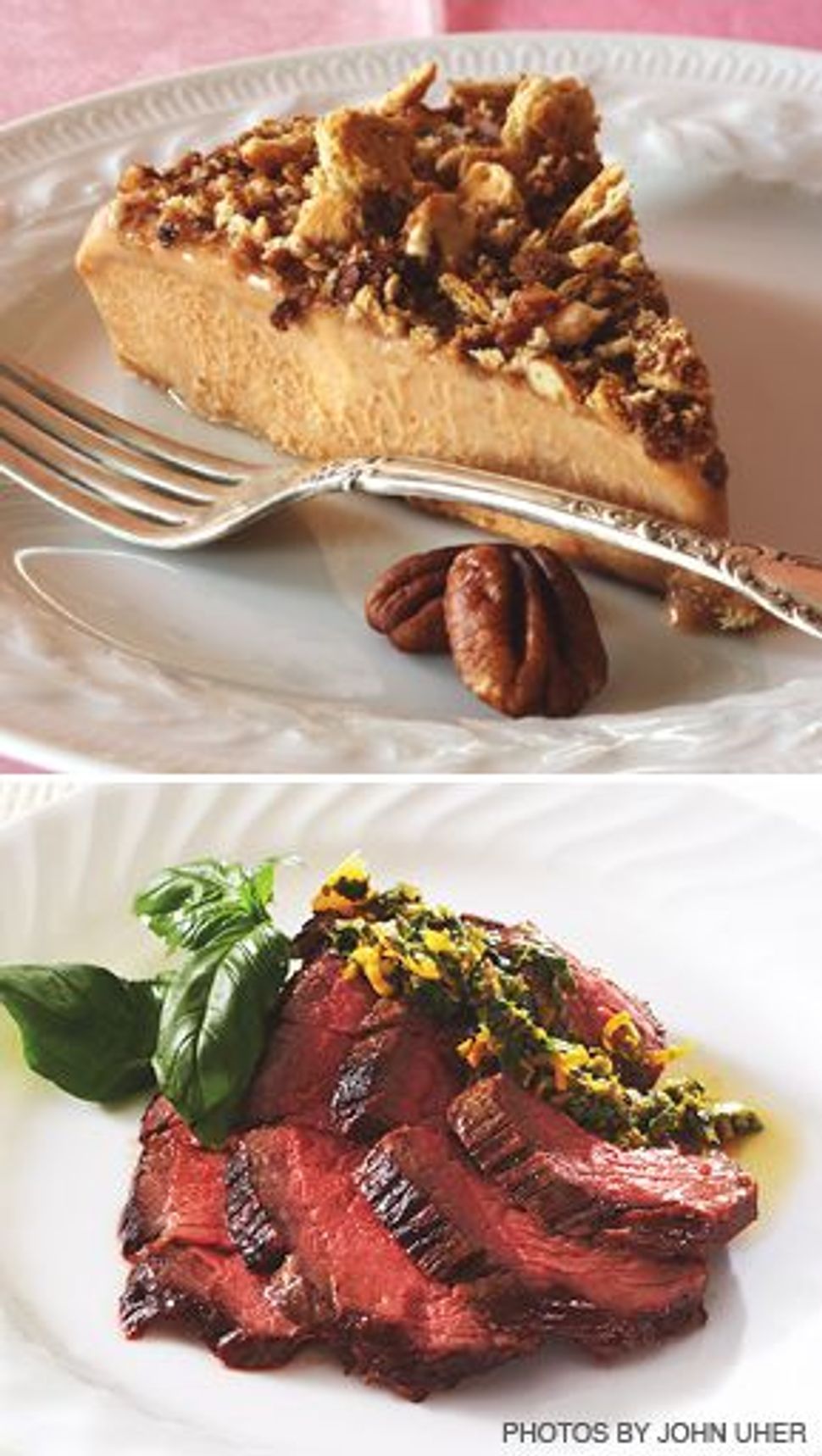 Susie Fishbein, kosher food maven and author of the popular cookbook series “Kosher by Design,” prides herself on being the Rachael Ray of kosher cooking. Her recipes, she claims, are accessible to everyday people. So when her new cookbook, “Kosher by Design Lightens Up” (Mesorah Publications), came out last month, I thought I’d use it to try my hand at making a full meal. 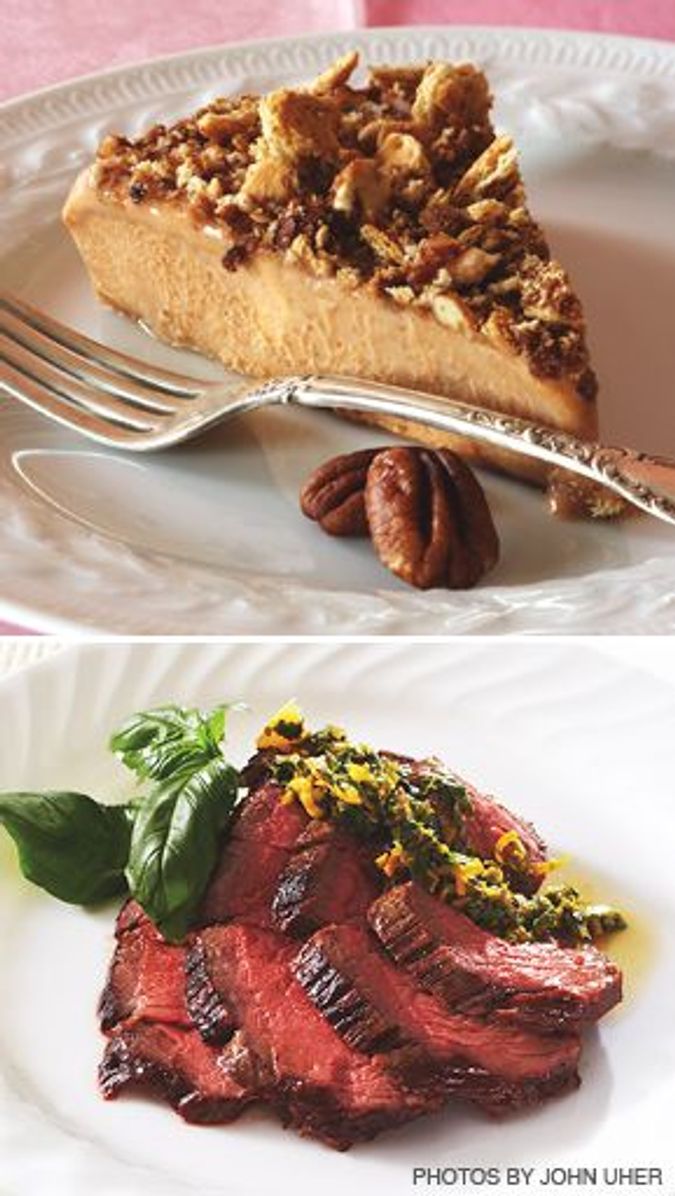 The book is dedicated to healthful cooking, with input from editor Bonnie Taub-Dix, a spokeswoman for the American Dietetic Association. Though I spent my college years eating salads, stir-fry (the one thing I could actually make) and frozen Trader Joe’s dinners, my increasing obsession with the Food Network has inspired me this past year to experiment more in the kitchen.

So with cookbook in hand, I crafted the perfect Sunday night dinner. On the menu was zucchini lentil soup, citrus London broil and a frozen pumpkin pie. I started out with the dessert, since it needed to sit in the freezer for a few hours before being served. The recipe was simple enough, with only eight ingredients and the joy of smashing graham crackers and pecans. Though I confess I did have some help from my boyfriend Bryan — he mixed the vanilla frozen yogurt with the pumpkin purée — I did the nitty-gritty: mixing the spices and making the topping. Once the filling was complete and the pie was in the freezer, I moved on to marinating the meat.

I rarely cook meat at home; I’ve made it maybe twice in my life, and I’ve never made London broil, so I was a little nervous to serve this dish as the evening’s entrée. But cooking for Bryan and my former roommate, Justine, was not terribly daunting, and I was eager to test my prowess in the kitchen.

I bought a pound and a half of London broil, half the amount specified in the recipe, and spent most of my time zesting lemons, limes and oranges. The meat was then laid out to soak in a bath of fresh garlic, olive oil, teriyaki sauce, orange juice and slices of citrus delights.

Next up was the zucchini lentil soup. Aside from the fact that I spent what seemed like hours chopping garlic, onions and zucchini, and received a minor hand scalding when the boiling chicken stock and cooked vegetables went into the blender, it was a royal success. The soup came out thick and hearty, and the plump lentils added a toothsome texture. In keeping with Fishbein’s healthy theme, the recipe called for a garnish of spiced egg roll wrappers as a substitute for crusty bread. They were delicious, and I recommend making more than the three suggested. The recipe, however, did not call for salt and pepper, and it needed both. Bryan had the brilliant idea of adding lemon juice, which brought out all the soup’s flavors perfectly, nicely leading to the main course.

If only the London broil came out as well. According to the recipe, the meat should be marinated for about five hours, seared in olive oil over medium heat and then transferred to the oven for 25 to 35 minutes. That seemed like a long time to me, but I went against my instincts and left the meat in the oven for 20 minutes, just shy of the required time. When it came out, it was hard as a rock. Unfortunately, I can’t blame Fishbein entirely. I did forget that buying half the amount of meat the recipe called for probably should translate into less cooking time.

Justine is accustomed to eating overdone meat, after enduring years of her mom’s cooking, so she tolerated my blunder far more than I did. My mom, on the other hand, prefers her meat as red as a tomato, the bloodier the better. I could only imagine her aversion to the dish despite its beautiful presentation — dressed in a zest rainbow of lemon, lime and orange. Bryan, who was trying hard to please, was sure to mention that the flavor was good.

It was finally time for dessert, much needed to wash down the disagreeable entrée. While no major mistakes were made, we all agreed that the frozen pumpkin pie could have used an Oreo cookie crust, or perhaps some chocolate chips sprinkled throughout. But that probably would not have passed the “healthy” test.

Despite a few stumbles along the way, the cookbook was a hit. After dinner, Justine flipped through it, reciting all the tips on the best flours, grains and oils to use. She pointed out a number of dishes she would love to make. The wheat germ crusted chicken cutlets especially appealed to her, as did the fudge brownie torte. If she’ll let me, I’d be happy to have another go.

Lana Gersten is a writer living in Brooklyn and a frequent contributor to the Forward.

¼ cup orange juice, not from concentrate

zest from 1 orange and juice from ½ orange

zest from 1 lemon and juice from ½ lemon

zest from 1 lime and juice from ½ lime

Score the meat with a diamond pattern on both sides. Place into a large, heavy-duty ziplock bag. Scatter the sliced garlic over the meat. Layer the slices of orange, lemon, and lime on and under the meat.

In a medium bowl, whisk the teriyaki sauce, olive oil, and orange juice. Add to the bag along with the springs of basil. Seal the bag, pressing out all the air. Allow the meat to marinate overnight or for at least 4 hours.

Remove the meat from the bag and discard the marinade. Season the meat on both sides with salt and pepper.

Heat the tablespoon of olive oil in a large skillet over medium heat. Sear the meat for 4 minutes per side to caramelize the outside. Transfer the meat to a baking pan and roast for 25-35 minutes, depending on thickness; do not overcook.

Allow the meat to rest for 10 minutes, then thinly slice on the diagonal.

While the meat is resting, prepare the citrus dressing: In a medium bowl, whisk the sesame oil; zest and juices from the orange, lemon, and lime; minced basil leaves; teriyaki sauce; minced garlic; and pepper. Drizzle over the meat.

1 large sweet onion, such as Vidalia, cut into ¼-inch pieces

2 large or 3 medium zucchini, with skin, cut into ¼-inch pieces

Lay the egg roll wrappers on the prepared cookie sheet. In a small bowl, whisk the egg white and water. Brush each egg roll wrapper very lightly with the egg white mixture. Sprinkle with dried dill and dried basil. Place into the oven and bake for 5 minutes or until just golden brown. Set aside.

Meanwhile, heat the olive oil in a large soup pot over medium-low heat. Add the onion, garlic, sage, and thyme. Cook until the onion is translucent; do not allow it to brown.

Add the zucchini and dill. Saute for 4-5 minutes, until zucchini is a little shiny.

Add the stock. Simmer for 15-20 minutes, or until the zucchini is soft.

Using an immersion blender, right in the pot, puree the soup until creamy. This can also be done in batches in a blender.

Ladle the soup into bowls. Holding a spiced egg roll crisp over the pot to catch the spices that may fall off, break each into uneven shards and stand a few in the center of each bowl.

Place the graham crackers into a heavy ziplock bag. Break into small pieces, trying not to crush too finely; you want some texture. Pour into small bowl. Add the pecans, 1 tablespoon brown sugar, maple syrup, and ½ teaspoon cinnamon. Mix to combine. Set aside.

Remove the ice cream from the freezer to soften slightly.

Cut two sheets of parchment paper or aluminum foil. Fold each in half lengthwise. Set inside the rim of a 9- or 10-inch springform pan. Tape as necessary to the outside of the pan to form a collar 3-4 inches above the rim of the pan. Set aside.

Place the ice cream into the bowl of a stand mixer fitted with a paddle attachment. Beat on medium-high speed until smooth. Add the pumpkin, ½ cup brown sugar, remaining ½ teaspoon cinnamon, and nutmeg. Beat until fully combined and creamy. Transfer to prepared pan. Sprinkle on the graham cracker topping. Place, uncovered, in the freezer for at least an hour or overnight.

Remove from the freezer. Release the sides of the springform pan. Discard the parchment. Slice and serve immediately.

Reprinted with permission from ArtScroll/Mesorah publications from Susie Fishbein’s “Kosher by Design Lightens Up.”

Cooking Up a (Healthy) Storm