On Farewell Tour, Olmert Fails To Convince Even His Own Community 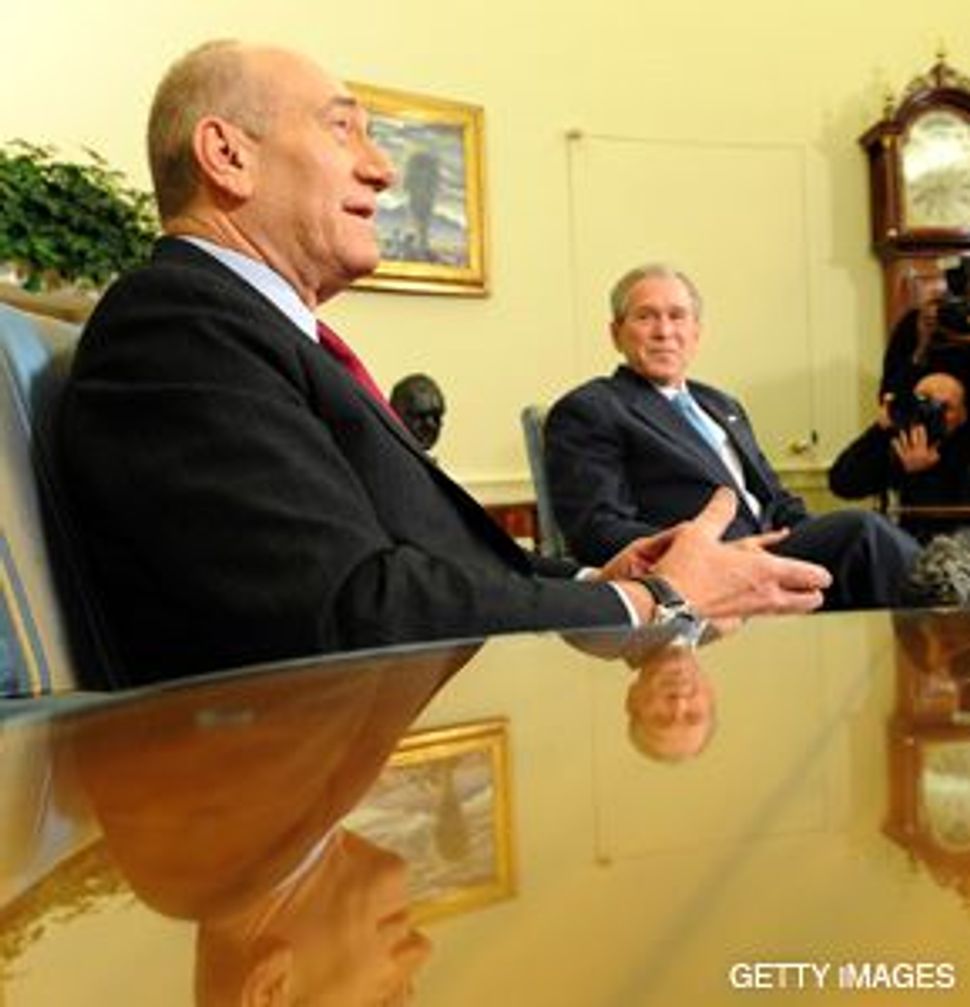 LAST TIME: Ehud Olmert spoke with President Bush during his last visit to the United States as Israel?s prime minister.

Washington — Outgoing Israeli Prime Minister Ehud Olmert, who just made his final round of farewells in Washington, is leaving unfinished the task of convincing American Jewry to rally behind his call for the establishment of a Palestinian state. 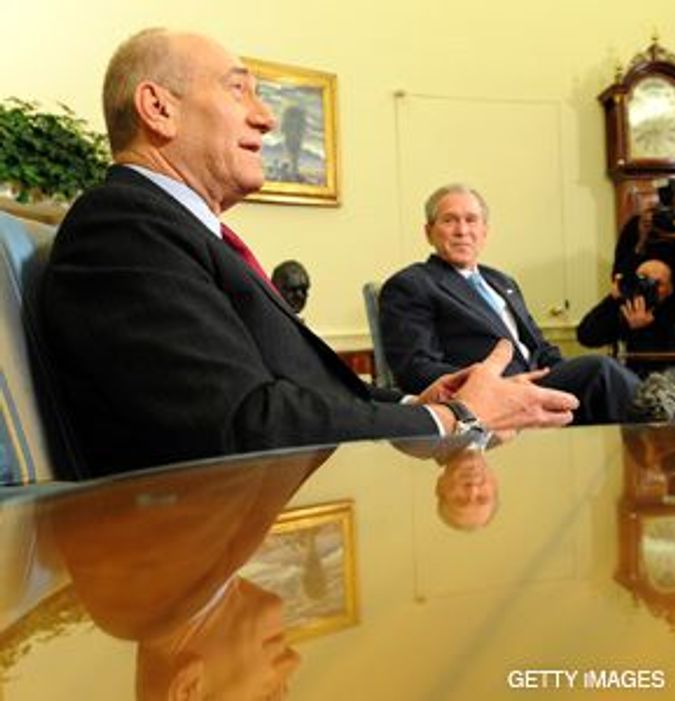 LAST TIME: Ehud Olmert spoke with President Bush during his last visit to the United States as Israel?s prime minister.

In meeting with a group of Jewish leaders November 25, Olmert repeated his call to seize on what may be the final opportunity to achieve a two-state solution to the Israeli-Palestinian conflict. This call has dominated Olmert’s relationship with the Jewish community since the prime minister took office, but communal leaders feel that he did not win over enough hearts and minds to truly affect public opinion.

“He is respected for his courage,” said Jewish Council for Public Affairs executive director Rabbi Steve Gutow, who attended the meeting. “And because he is a good communicator, he can carry a message that is not easy for some to hear.” Yet, several Jewish leaders agreed that Olmert did not succeed in winning over the Jewish establishment, which remains skeptical about the peace process and the need for immediate compromise.

Olmert’s close relations with the American Jewish community took an ironic, and arguably tragic, twist when it was his ties with one American supporter that brought about his political downfall. Olmert was pushed to resign after being investigated for allegedly receiving cash-packed envelopes from Morris Talansky, a Long Island businessman. Talansky was part of a large network of friends and supporters whom Olmert maintained in North America, often leaning on them for political fundraising and support.

For the broader Jewish community, the outgoing Israeli leader was more of a complex figure. His ideological transition — from hardline supporter of “Greater Israel” to leading advocate of dividing the land — fascinated many.

“His legacy will be one of being decisive, but at the same time of being someone who is not stuck ideologically, who can change his mind,” said Abraham Foxman, national director of the Anti-Defamation League. Foxman, who spent hours in meetings with Olmert in both Jerusalem and the United States, rates Olmert as being on a par only with Benjamin Netanyahu in terms of openness to the American Jewish community and of understanding the community’s importance. “He probably had more friends in the Jewish community here than any other Israeli prime minister,” Foxman said. “He was a politician on both sides of the ocean and felt as comfortable here as he did in Israel.”

It is this level of comfort that led Olmert to convey his own personal ideological transformation to the Jewish community. In a series of public speeches, conference calls with Jewish leaders and roundtable meetings in Washington, the Israeli leader spoke of the urgency he saw in dividing the land and establishing a Palestinian state. According to a member of Olmert’s team, he spent more time meeting with Jewish leaders and explaining his views to the American diaspora than any other Israeli leader before him.

Still, his message was hard to swallow for some within the community, and it forced Olmert to face opposition from a coalition of groups fighting against territorial compromise in Jerusalem. On the eve of the Annapolis, Md., peace conference in November 2007, Olmert spoke out harshly against these groups. But two days later, during a meeting with representatives of the Jewish community, he asked to clarify his stand to ensure that these representatives are aware that he welcomes any input from Jews across the world.

“Although it is clear we disagreed with Olmert on these issues, we appreciated the fact that he kept an open line of communication with us,” said Nathan Diament of the Orthodox Union, one of the groups actively opposing Olmert’s approach on the future of Jerusalem.

For the left-leaning groups, Olmert’s transformation was viewed as a valuable asset. At least in the beginning.

“I will quote Olmert until my dying breath,” said M.J. Rosenberg, who directs policy analysis at the Israel Policy Forum, a group that advocates a two-state solution. Rosenberg said that although hearing the Israeli leader speak of the need for territorial compromise helped his group’s cause, it had little impact on American Jews. “The Jewish community liked him better in his earlier incarnation, as the fair-haired right-winger on ‘Nightline,’” he said.

Another dovish Jewish activist said that the outgoing prime minister actually did a disservice to the cause of winning over hearts and minds of skeptical members of the Jewish community. “As he became increasingly embroiled in scandals, he turned less and less attractive as an ambassador of the two-state solution,” the activist said.

Although not much tangible progress was seen in Middle East peacemaking during his term, Olmert kept up attempts to change the mindset in both Israel and the Diaspora, even in his final months in office. He delivered the message November 17 in his keynote speech at the United Jewish Communities General Assembly in Jerusalem, saying that peace should be “the inheritance we provide our future generations.” He stressed that point in his November 25 meeting with Jewish leaders in Washington.

In a separate meeting with U.S. Rep. Robert Wexler of Florida during his visit to Washington, Olmert also voiced optimism regarding the prospects of the next American administration continuing the push for peace. “I found him upbeat and at the same time reflective,” Wexler said of Olmert after the meeting, “He spoke about the lessons he learned and how to apply them to the future.”

Asked about how these lessons might relate to the Jewish community in America, one of Olmert’s aides came up with an example from a meeting that the Israeli leader held several months ago with a visiting foreign dignitary. Talking about his efforts to convince overseas Jews to support the peace process, Olmert said, “Diaspora Jews are in love with peace, but I’m not sure they’re in love with the price it will require.”

Olmert’s ties with Diaspora Jews are expected to become an issue of public record if and when the Israeli leader goes to trial for taking money from Talansky. Olmert has already gone through nine lengthy police investigations, but it is still unclear when an indictment will be delivered.

As for Talansky, he is expected to receive immunity from prosecution in the United States in return for testifying against Olmert in Israel. This appears to be the only known incident of a friendship between Olmert and a member of the Diaspora that has not ended well.

On Farewell Tour, Olmert Fails To Convince Even His Own Community