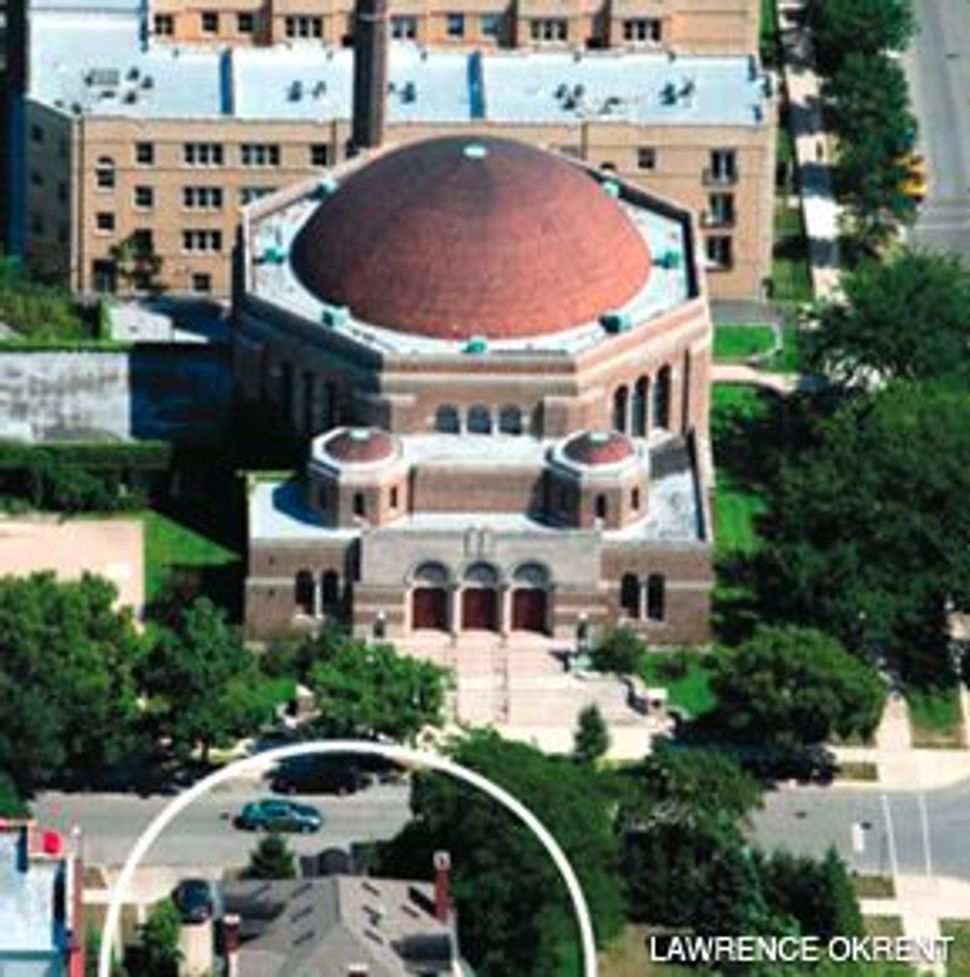 There Goes the Neighborhood: Security barriers, Secret Service agents and local police now block off this intersection in Chicago?s Hyde Park. But when this aerial photograph was taken, it was easy to walk from Congregation KAM-Isaiah Israel to the Obamas? home (circled) across the street.

Chicago — On a recent Sunday afternoon at a historic Chicago synagogue, the sanctuary was packed but the mood was restrained: A longtime congregant had died, and about 300 people had turned out for his funeral service. But amid the solemnity, the occasional mourner discreetly pulled loved ones out to the synagogue’s front steps to snap cell phone pictures of a large brick house, mostly obscured by shrubs, across the street. 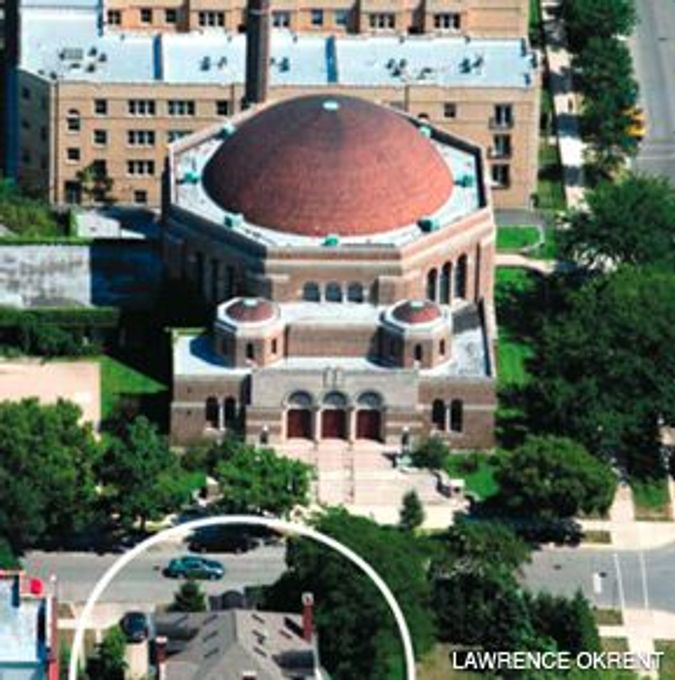 There Goes the Neighborhood: Security barriers, Secret Service agents and local police now block off this intersection in Chicago?s Hyde Park. But when this aerial photograph was taken, it was easy to walk from Congregation KAM-Isaiah Israel to the Obamas? home (circled) across the street. 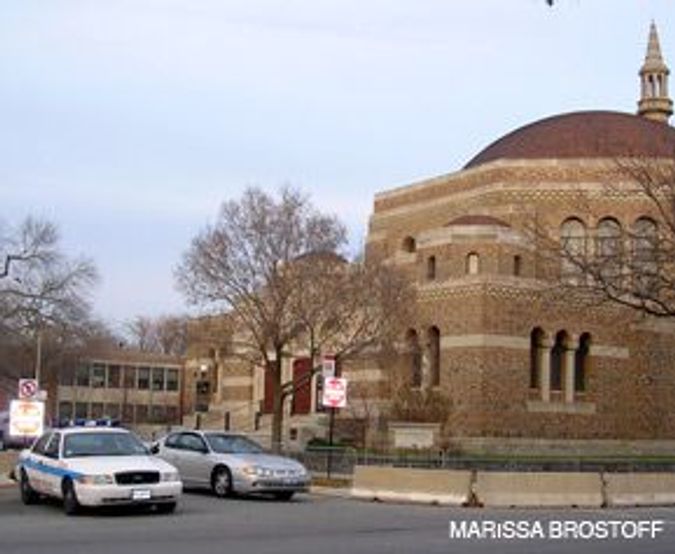 Neighbors: Secret Service and local police block access to the street shared by the Chicago synagogue and the Obama home.

Such scenes have become commonplace in recent months at KAM-Isaiah Israel, a Reform congregation in the Hyde Park neighborhood. The dome of the historic Byzantine-style synagogue looms over the red-brick house where Barack Obama has lived for the past three years, and from which he made the short trip across the street to deliver an early political speech to a Jewish crowd. Now that Obama is an international figure — and the block is home to the urban White House of the president-elect — congregants and guests arriving for a Sabbath or funeral service have to work their way through an extensive cordon of Secret Service and local police.

The intense security that surrounds not just the Obama home, but also a few nearby blocks, makes visiting the synagogue a complicated affair: No unauthorized cars can enter the area, and the hearty pilgrims who park blocks away and enter by foot are subjected to checkpoints. But for a congregation that prides itself on having remained on Chicago’s largely black South Side when most Jews moved to the northern suburbs in the 1950s and ’60s, the excitement about its neighborhood — indeed, its block — producing the country’s first black president far outweighs the hassle of parking.

“I’ve been channeling my parents lately, because 50 years ago, this was the dream,” said Roberta Siegel, an active KAM-II member whose father was the president of Isaiah Israel (prior to its merger with Kehilath Anshe Ma’arav, or KAM) in the 1950s. “A commitment was made to keeping this an urban middle-class community.”

Indeed, the synagogue stands today as a living symbol for a kind of historic black-Jewish cooperation that the presidential election both recalled and vindicated, given the high rates at which Jews voted for Obama.

Inside KAM-II, the two communities are living side by side. On the morning of the funeral, a crowd of mostly older Jewish congregants gathered in the sunny social hall to hear a professor from the nearby University of Chicago speak about Martin Buber and the Arab-Israeli conflict. At the same time, the domed sanctuary was occupied by a small black Christian congregation called City of Faith, which holds weekly services in the building. In a synagogue classroom, children from the two congregations worked on a quilt together as part of a community arts program called Poetry Pals. This sort of cross-pollination has touched Obama’s life in the neighborhood, as well: His daughters went to preschool at the nearby Akiba-Schechter Jewish Day School.

Several of KAM-II’s congregants and leaders, including the synagogue’s emeritus rabbi, Arnold Jacob Wolf, and current president, Larry Bloom, know Obama personally and have supported him from the outset of his political career.

When Wolf met Obama for the first time at a fundraiser for the fledgling politician’s state senate campaign, he told the Forward, “I said, ‘Someday you will be vice president of the United States,’ and he said, ‘Why vice president?’”

Bloom, a former city alderman, said that he used to introduce the candidate to locals on commuter train platforms when he was running for state senate. In the days before the area around the synagogue was a no-drive zone, Bloom sometimes parked in the driveway of the parents of Obama adviser Valerie Jarrett on his way to synagogue.

Crystal and others at the synagogue say that they have gotten used to life with the Secret Service, which has increased its force around Obama’s house several times over the course of the past year. As the Forward reported at the time of the presidential primaries, for several months Secret Service agents had the key to the synagogue and permission to use its restrooms at any time of the day or night — which sometimes led to them tripping the alarm. Now, however, they have their own facilities.

“You don’t often see the same person,” Bloom said of the agents. “They change the guard every 45 minutes.”

Of Obama, he said, “We know when he comes and goes.” On one memorable occasion, the motorcade rolled out half an hour before Kol Nidre services began.

This closeness to fame has hit no ordinary synagogue. The imposing building was constructed in 1923 by renowned Chicago architect Alfred Alschuler, at a time when the Hyde Park community was prospering thanks to the expanding University of Chicago.

In the 1950s, the city’s Jews began moving en masse to Chicago’s northern suburbs. During that era, the spiritual leader of KAM, Jacob Weinstein, was nationally famous for his social activism. He campaigned successfully to keep the synagogue in the city, but the membership dropped to around 350 families from around 1,000.

“Jews left the community in droves,” said Nancy Perelmuter, the widow of the rabbi who came to take over the Isaiah Israel congregation during those years. “The president of the congregation wrote a letter to my husband, asking, ‘Do you really want to come?’”

When the two congregations merged in 1971, the combined membership rose to about 930 families and KAM moved into Isaiah Israel’s historic building. The congregation became a gathering place for Jewish intellectuals from the University of Chicago. Today, the university’s president is among the members; the magazine rack in the lobby, rather than holding synagogue bulletins, boasts an array of leftist intellectual publications, from Dissent to the Journal of Palestine Studies.

The joy over Obama’s election comes during a rough period for KAM-II. The most recent rabbi left on a sour note this spring after a six-year stint during which he and the congregation frequently clashed, and his predecessor was not rehired after three years at the synagogue. Crystal, who took over the congregation last July, will, per his contract, move on next summer.

The synagogue has lost some congregants because of the tumult — about 475 families currently belong, down from an average of about 500 in recent years — but it also continues to face the obstacle that it has been struggling with for 50 years: Most of Chicago’s Jews live on the city’s north side. About half the congregation’s new members live outside Hyde Park. In addition to that, a few newcomers have been deterred, at least initially, by the security around the synagogue.

“I put off joining, because it took me awhile to figure out how to approach the building and how to get in,” said Alyssa Luboff, a doctoral student in philosophy at the University of Chicago. Luboff attended a recent Friday night service geared toward new members, with her three small children in tow. “I still haven’t figured out how to park,” she said.

Bloom said that he has heard from both potential new members who come to the synagogue to peek at the house across the street, and from those who say that they security has them nervous about coming. For his part, he said, he tries to look at the situation from a different point of view: Obama’s.

“When Sarah Palin said she knew about Russia because you could see it from Alaska, I wanted to say, ‘Obama can see a synagogue from his house; he obviously knows Jews,’” Bloom said.