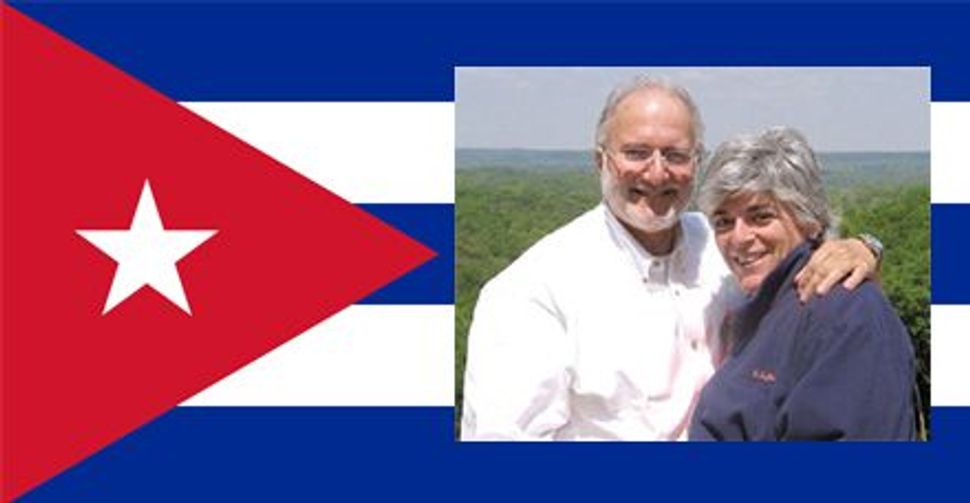 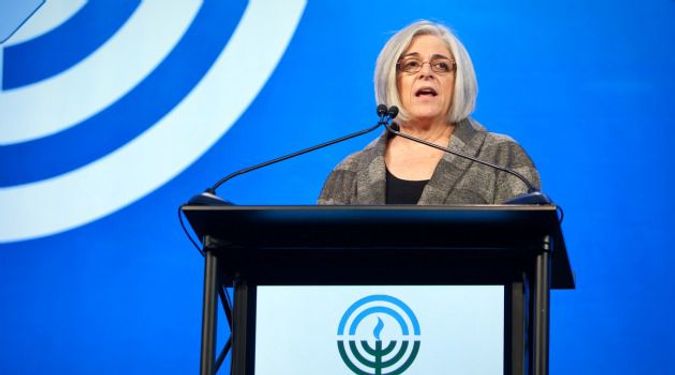 Pushing for Freedom: Judy Gross pleading for more action to free her husband, Alan Gross, at the recent Jewish Federations of North America gathering. Advocates for Alan Gross are shifting to a more open campaign after quiet diplomacy failed. Image by courtesy of jfna

An emotional Judy Gross recently pleaded with thousands of Jewish community leaders to help free her husband from a prison in Cuba, marking a public shift in what has been, up to now, a strategy of quiet diplomacy on his behalf.

“Let the Cuban government know that the Jewish community wants Alan home,” Gross implored her audience at the November 8 closing session of the annual conference of the Jewish Federations of North America.

Her husband, Alan Gross, a contractor for the U.S. Agency for International Development, is serving a 15-year sentence after being accused of crimes against the Cuban state for seeking to bring banned Internet equipment to Cuba’s Jewish community. 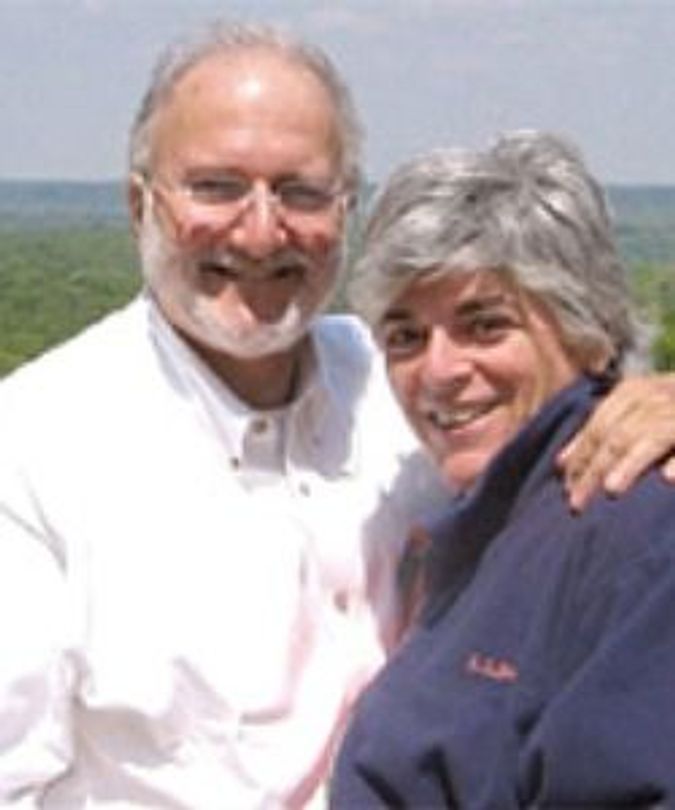 “Alan’s only intention was to help the small Jewish communities in Cuba,” she said, “nothing more.”

The Gross case has proven to be one of the more difficult diplomatic challenges facing Jewish leaders, who would like to help free the 61-year-old suburban Washington, D.C. resident. On the surface, it is a case of an American Jew imprisoned for seeking to aid Jews living under a communist government. But in contrast to the black-and-white approach American Jews took in trying to aid Soviet Jewry, Cuba experts and Jewish activists see the need for a highly nuanced strategy. Unlike Jews in the old Soviet Union, Cuba’s 2,000-strong Jewish community enjoys religious freedom and positive, if wary, relations with the ruling regime of Raul Castro. They are also free to emigrate to Israel, with which Cuba has unofficial but productive relations.

Until now, Gross’ family and friends chose not to focus on Gross’s Jewish identity, or on his work with Havana’s Jewish community. Since his detention by Cuban authorities nearly two years ago, his supporters have feared such an emphasis would hurt the cause and could cause more trouble for the Cuban Jewish community.

The strategy changed when they realized they weren’t getting closer to winning Gross’s freedom.

“The [American] Jewish community is getting more involved because we haven’t seen movement on this issue,” said Ron Halber, executive director of the Jewish Community Relations Council of Greater Washington. “It is fair to say the Jewish community has gone beyond the tipping point on whether to get involved or not.”

Weighing in on behalf of Gross also required the Jewish community to walk a political and diplomatic tightrope.

Gross was sent to Cuba under a contract with USAID as part of a program funded under the 1996 Helms-Burton Act. The controversial statute strengthens sanctions against Cuba and outlines measures meant to undermine the country’s communist regime.

But even as they motivate Jews to get involved in pushing for Gross’s release, his advocates have chosen so far to avoid taking a stand on the Helms-Burton law and on the issue of a broader American-Cuban rapprochement. It is a shift that some believe could expedite Gross’s release. But this is seen as a political nonstarter, especially in an election year in which President Obama has to worry about the Cuban-American vote in Florida, a crucial swing state.

The campaign to win Gross’s release now includes weekly interfaith vigils held outside the Cuban Interests Section in Washington, letters sent by Jewish leaders to members of Congress and a set of national grassroots events planned for the weekend of December 3, which marks the second anniversary of Gross’s arrest.

“The community seems ready to help us in the fight,” Judy Gross wrote in a November 15 email exchange with the Forward. “Our hope is that the Jewish community will use its incredibly strong global voice to tell the Cuban government that we want Alan home now.”

Gross’s family and lawyers say the veteran aid worker’s mission in Cuba was to provide unfiltered Internet access to members of the Jewish community to help them better communicate and to learn about Jewish life outside the island. But Cuba had declared that any action taken under the Helms-Burton law would be viewed as an act against its sovereignty.

Gross, a social worker and international development expert who was employed by a private firm under contract to USAID, is widely described as relatively naive and anything but a cloak-and-dagger type. Since his arrest at Havana Airport in 2009, Gross has reportedly lost nearly 100 pounds. He now suffers from various medical conditions. Back home, his daughter and mother are fighting cancer. Initially, leaders of Cuba’s Jewish community distanced themselves from Gross, but later they began helping him in prison.

The past two years have seen flurries of diplomatic activity around Gross, but little progress has been made.

According to an October Associated Press report, Cuba, in talks with U.S. officials and intermediaries such as former New Mexico Governor Bill Richardson, has proposed to exchange Gross for members of the Cuban Five, a group of agents convicted in 2001 for trying to spy on U.S. military installations and American Cuban expatriates in Miami. The United States has rejected pardons for the four who remain in jail. But it has reportedly offered to press a Miami federal court to allow one of their number, who has been released on parole, to finish his probation period in Cuba, in exchange for Gross’ release. Cuba has rejected this.

Gross himself appears to view the possibility of a prisoner swap favorably, especially after Israel agreed to release hundreds of imprisoned Palestinians in exchange for captured soldier Gilad Shalit. Rabbi David Schneyer, founder of Am Kolel Jewish Renewal Community of Greater Washington, recently visited Gross in prison and wrote in a report, “Having learned about the recent swap of Gilad Shalit for more than 1,000 imprisoned Palestinians, [Gross] felt that the U.S. and Cuba could do the same for him and the Cuban Five.”

Julia Sweig, director for Latin America at the Council on Foreign Relations and a leading expert on Cuban-American relations, said a prisoner swap seems unlikely. She said the United States could discuss a shift in its relations with Cuba that would also include the release of Gross — if it had the political stomach for it.

“But there is no political will in the U.S. government when it comes to Cuba,” she said. “Gross is a victim of the broader U.S.-Cuba paralysis, and here the blame goes squarely to American politicians.”

She cited Cuban-American lawmakers such as Democratic Senator Robert Menendez of New Jersey, Republican Senator Marco Rubio of Florida and Rep. Ileana Ros-Lehtinen, a Florida Republican, who use their positions on the House and Senate foreign relations committees to block attempts to change American policy toward Cuba. State Department officials also seek to avoid the confrontational issue.

Obama has shown little appetite to take bold steps to improve ties with Havana. Political analysts say he can ill afford to risk angering Cuban voters when Florida is a linchpin to his re-election strategy.

Meanwhile, Jewish individuals and organizations with close ties to Cuban-American lawmakers have been reluctant to push them to ease their opposition to negotiating with Cuba.

“People in the Cuban Jewish community feel very sad and want to see him released,” said former community member Arturo Lopez-Levy, who left the country 10 years ago. “But people,” he added, “feel it was totally irresponsible for the USAID to send him there.”