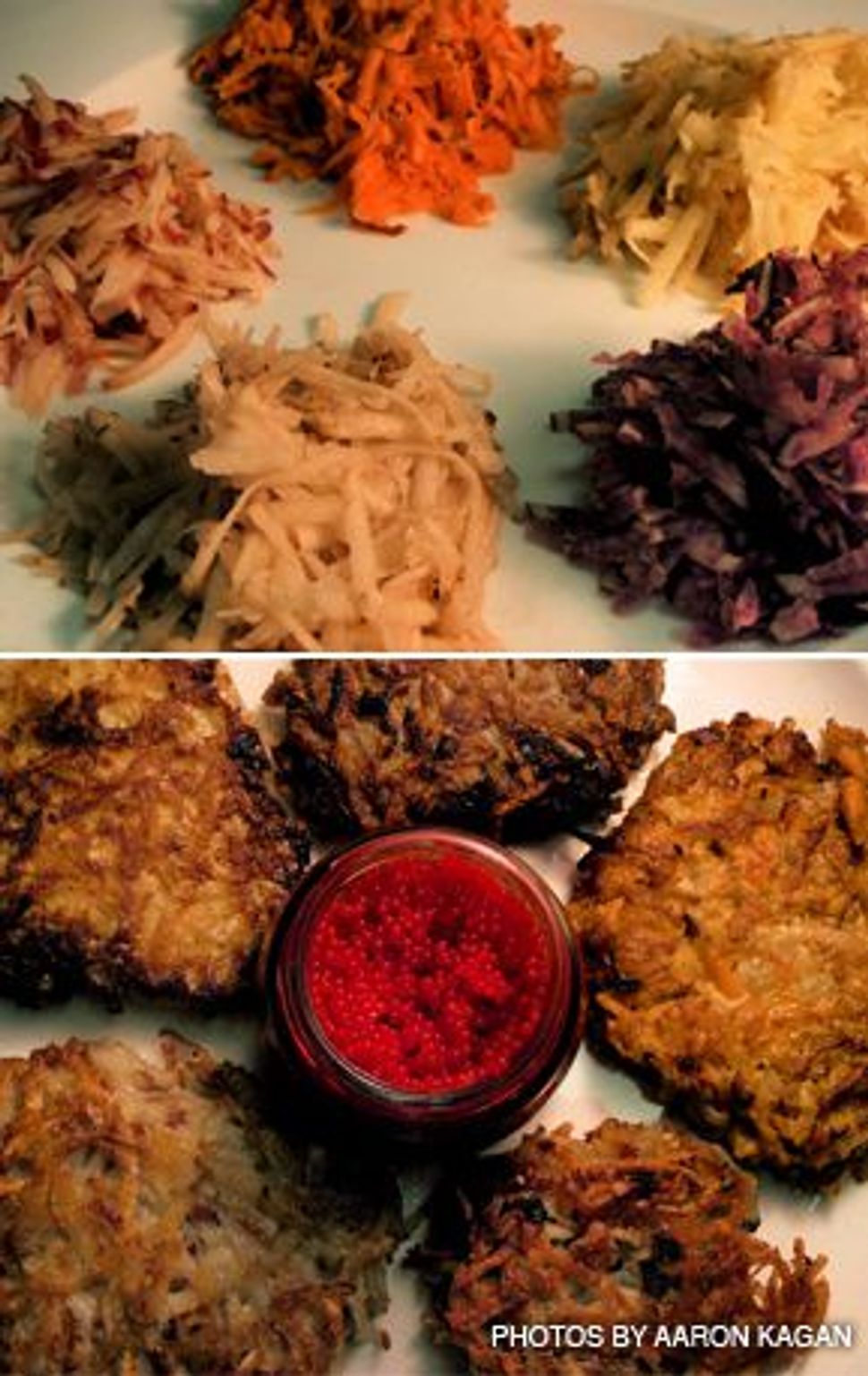 In years past, you had one option for making latkes: the potato. Now countless variations exist, such as latkes made from zucchini, beets or vegetable medleys. Still, there is a surprising array of possibilities available from just sticking with the potato, provided you experiment with different types. 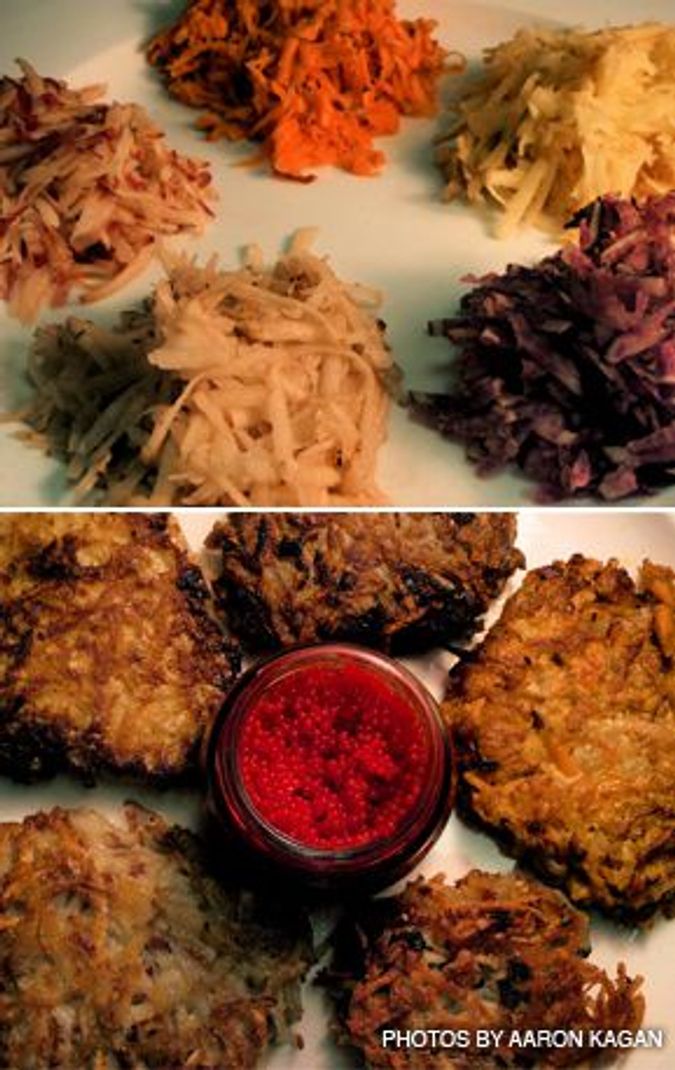 A traditional dietary staple of a diverse group of cultures, ranging from the Inca to the Irish, the potato has recently come under the gun as a controversial food, with some nutritionists placing it in the same camp as white sugar. But with the low-carb backlash now in full retreat, the potato is regaining its status as a nourishing and inexpensive food. In fact, the United Nations declared 2008 the “International Year of the Potato,” and the organization hopes that renewed interest in potatoes will help it meet its Millennium Development Goals of decreasing poverty and hunger.

At the same time, the variety of potatoes available to shoppers in the United States has skyrocketed. We can now choose between Russet, Yukon Gold, White Boiler, Red Bliss, Fingerling, New and even Purple Peruvian. Much like tomatoes, more options exist among heirloom crops sold at farmers markets and natural foods stores.

Despite their many forms, potatoes can be categorized by varying degrees of two basic characteristics: starchy and waxy. For baking, cooks generally prefer a starchier potato, like a Russet, while a waxy potato like the Yukon Gold would do better mashed or in chowder. Does it really matter? When it comes to latkes, the answer is yes.

To find the perfect potato for latkes, I prepared pancakes for a group of friends made from five different types: Russet, Yukon Gold, red, blue and sweet. The latkes were then judged by texture, flavor and appearance.

Like the potatoes they’re made from, latkes usually fall into one of two categories: fluffy or crunchy. Besides the main ingredient, latkes can, of course, vary in other ways, depending on the type and quantity of salt, the inclusion of pepper or other spices, the amount of egg or onion, the grating technique, cooking temperature, choice of fat and topping.

For the purpose of this test, all latkes were made with the same recipe save the variety of potato, and served with homemade applesauce and caviar. For the record, it takes very little effort to have a pot of sliced, seeded apples cooking while you’re grating and frying, and the results are far better than anything that comes from a jar. It should also be noted that if you want an egg-less latke, you can use the starch that settles out of the liquid you obtain from squeezing the shredded, raw potato.

Different potatoes make surprisingly different latkes, and the winner depends on whether you prefer fluffy or crunchy. Among those tested, the extremes of the starchy-waxy spectrum were best represented by Russet and blue potatoes, respectively. Because these potatoes had the most distinct characteristics, they also made for the best latkes. As a rule of thumb, a starchy potato makes a crunchy pancake, while waxy yields fluffy.

The Russets made picture perfect, incredibly crunchy latkes. The individual shredded pieces of potato retained their shape and integrity, forming a thatched crust that lasted longer once out of the pan. Despite being starchy, the Russet pancakes stayed moist, but not nearly as much as the blues.

The blue potatoes made very different but equally delicious latkes. Unlike the Russets, the individual strands of blue did not remain separated — rather, they melted together, creating a uniformly moist and fluffy consistency. Despite their exotic pigmentation, the blues yielded the most classic potato flavor, with a hint of minerals and yeast.

The least appetizing latkes were those that were neither crunchy nor fluffy, but somewhere in between. Pancakes made from red potatoes and Yukon Golds fell into this category. These varieties might be more versatile overall, but they failed at this specific task.

One could argue that the sweet potato didn’t belong on the list, as it isn’t a true potato but a member of a completely different species. By taste test, my dining companions and I reached the same conclusion: Sweet potato latkes have become increasingly popular, and may provide color and variety, but next to the real thing, they simply can’t hold their own. In our group, the sweet potato pancakes were unanimously declared the loser.

In terms of appearance, the less traditional potatoes were flashier, but the white flesh of the more common spuds served as a better canvas for browning. A blue latke is a beautiful thing to behold, but sadly, neither they nor the sweet potatoes were as vibrant once cooked.

The latke is a blank slate on which a creative cook can express countless variations. Different types of vegetables may score points for innovation, but there’s good reason that latkes are traditionally made from potatoes. They’re they perfect vehicle for oil, and therefore the perfect Hanukkah food.

*Aaron Kagan is a freelance writer living in the Boston area. *

For more Hanukkah recipes, go to Fast Forward at www.forward.com.

2 eggs (or the starch from the potatoes)

Grate potatoes and then squeeze out as much liquid as possible, one handful at a time. (For vegan recipe, save the liquid and see note below.)

Grate the onion, beat the egg and combine all ingredients.

Heat a skillet and add enough oil to generously cover the bottom of the pan. Test with a pinch of the latke mixture. When it sizzles, form small patties using a ¼ cup of the mixture per pancake, and add to the hot oil.

Leave patties untouched until a crust begins to form. Turn the latkes in the pan to ensure even browning.

Once browned on one side, flip and repeat step above.

For vegan latkes: Squeeze the liquid from the potatoes into a mixing bowl and let it settle until the starch separates and collects at the bottom. Gently pour off the liquid and mix the starch back into the potatoes.

Note: Other types of potatoes are perfectly acceptable for this recipe, and a starchier variety (like Russet) should be used if a crunchier latke is desired. Sweet potato latkes will scorch if cooked at the same temperature as regular potato latkes. Cook them on lower heat to preserve their color and to avoid blackening.