The Latest Bar Mitzvah Fad? Going Green, But at a Price 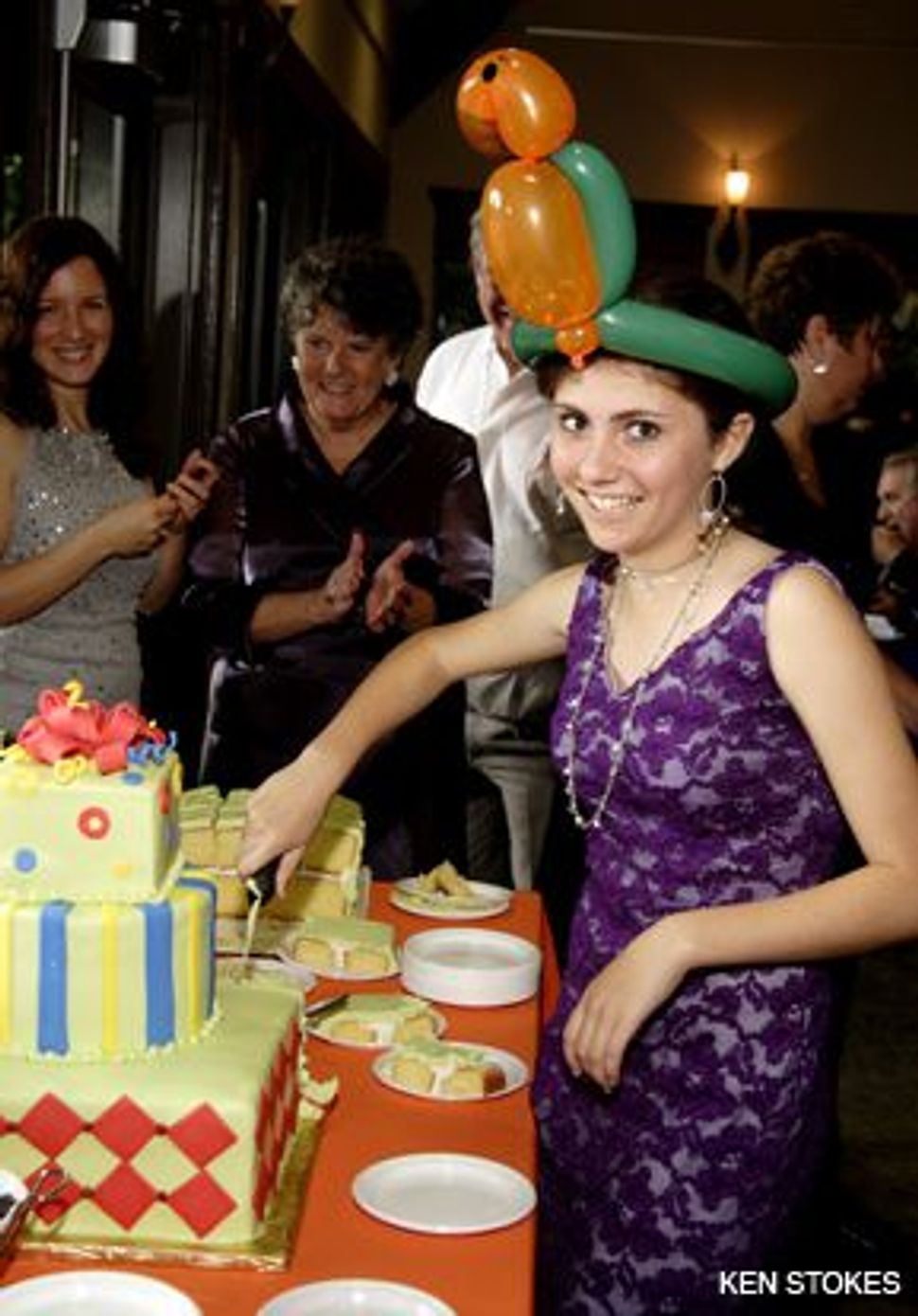 RECYCLED: Ruby Watts at her bat mitzvah, in a dress recycled for the occasion.

Los Angeles — For Samantha Krieger’s bat mitzvah, guests were asked to reply by e-mail instead of paper cards, the food was served on bamboo plates and candles decorated the wooden tables in place of flower centerpieces. 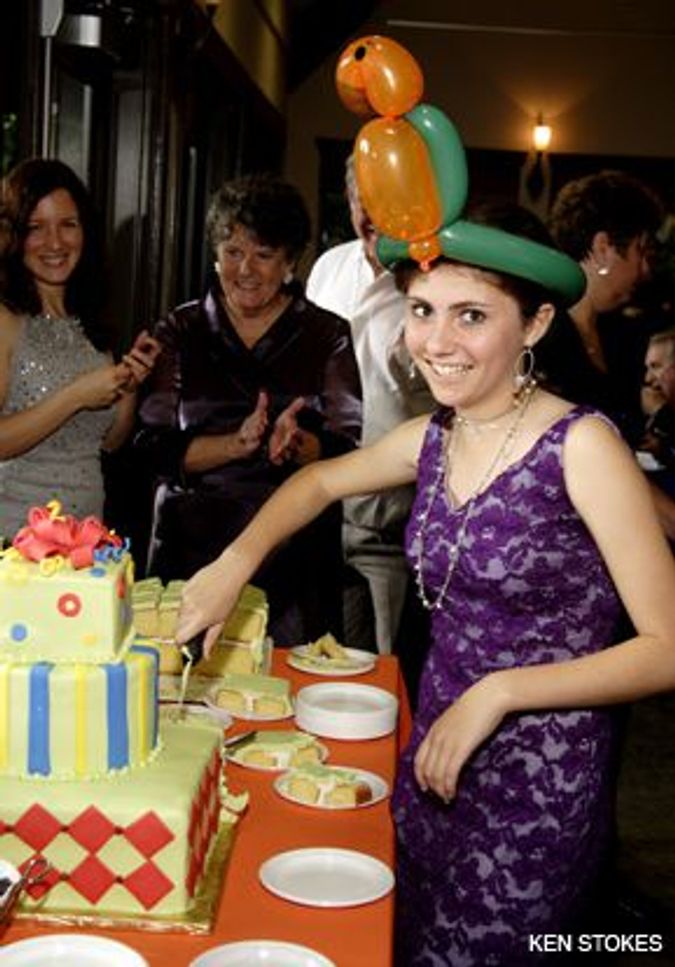 RECYCLED: Ruby Watts at her bat mitzvah, in a dress recycled for the occasion.

Krieger’s bat mitzvah reception — celebrated in a California state park in lieu of a hotel ballroom — was, after all, a “green” bat mitzvah, where every detail of the ritual and reception was scrutinized for its impact on the environment.

Held in the fall of 2007, Krieger’s rite of passage is one of some 40 green bar or bat mitzvahs that Deborah Kattler Kupetz, a Los Angeles green event planner, has organized in the last year alone. As Americans are increasingly trying to make their lives more eco-friendly — whether it means taking a canvas shopping bag to the supermarket or driving a Prius — scores of Jewish families are beginning to incorporate the trend into their religious lives. They say going green helps reclaim the significance of a rite of passage that has grown to emphasize the lavish party rather than the religious ritual.

“We had been to a lot of parties that were just kind of blowouts for teenagers,” said Samantha’s mother, Jennifer Krieger, “and because of the bat mitzvah milestone, we wanted the party to have more meaning.”

Themed bar and bat mitzvah receptions in American Jewry date back decades, and have included everything from Star Wars to chuck-wagon themed parties. In more recent years, there has been a trend of asking guests to donate to a selected cause instead of bringing a gift. Roger Bennett, an author of the 2005 book “Bar Mitzvah Disco” — a tongue-in-cheek look at the excessive bar mitzvahs that sprung from the MTV generation — had a punk-rock themed bar mitzvah reception back in 1983.

While green bar and bat mitzvahs can be seen as just the latest fad to emerge out of American popular culture, David Myers, director of the Center for Jewish Studies at the University of California, Los Angeles, said that they are, in fact, a different phenomenon.

“This is a variation on the theme, if you will, but one that I think can be infused with real meaning,” he said, “quite unlike the rodeo bar mitzvah or the Barbie bat mitzvah.”

For her daughter’s bat mitzvah, Krieger, chief financial officer of the Los Angeles city attorney’s office, skipped not only the RSVP cards, but also the fancy invitations altogether. Riffing on the chosen theme of water and conservation, Krieger donated to the Jewish National Fund, which used the money to support water projects in Israel. In return, JNF sent Krieger certificates, which she used as the invitations.

In the case of bar mitzvahs, while not every family wants the reception, the Kriegers had — held in Temescal Canyon under a canopy of sycamore trees — Kattler Kupetz said that she can go as green as the family will allow. In some instances, she uses recycled paper for the invitations; she crafts the menus from organic, locally produced food. For boys, Kattler Kupetz started out using recycled cardboard kippot that she ordered from an Israeli Web site, although she now makes her own from reclaimed materials. She uses LED lighting where possible, and she’ll work with a local food bank to distribute leftovers. Even the party balloons are held to the highest standards. “I would never use a Mylar balloon, because they never break down in the environment,” Kattler Kupetz said. “But different kinds of latex balloons are okay.”

And green bar or bat mitzvahs are not sweeping just the West Coast, where people tend to be more eco-conscious. At a recent bat mitzvah in Melbourne, Fla., 13-year-old Ruby Watts constructed table centerpieces out of Skittles candy, and she even forewent purchasing a dress. Instead, Watts restyled the lace dress that her aunt had worn at her own bat mitzvah more than a decade ago, dying it purple and tailoring it to fit.

Watts’s aunt, Kate Harrison, called the dress’s reuse “a form of recycling.” Harrison, 29, is the author of the forthcoming “The Green Bride Guide,” a how-to book for planning an eco-friendly wedding. A New Haven, Conn.-based graduate student in law and environmental management, Harrison recently began work on a green bar mitzvah guide.

Last spring, after helping her two sisters plan her nieces’ bat mitzvahs, Harrison realized that there were limited resources available for planning in an environmentally friendly way. So last April, she launched a “Green Bar Mitzvahs” blog, which, she said, attracts about 50 unique visitors a day.

“It’s very timely,” Harrison said. “This is a generation that knows about the environment; they’ve grown up with global warming, and their families are looking for a way to make their celebrations more meaningful and more connected.”

The Latest Bar Mitzvah Fad? Going Green, But at a Price