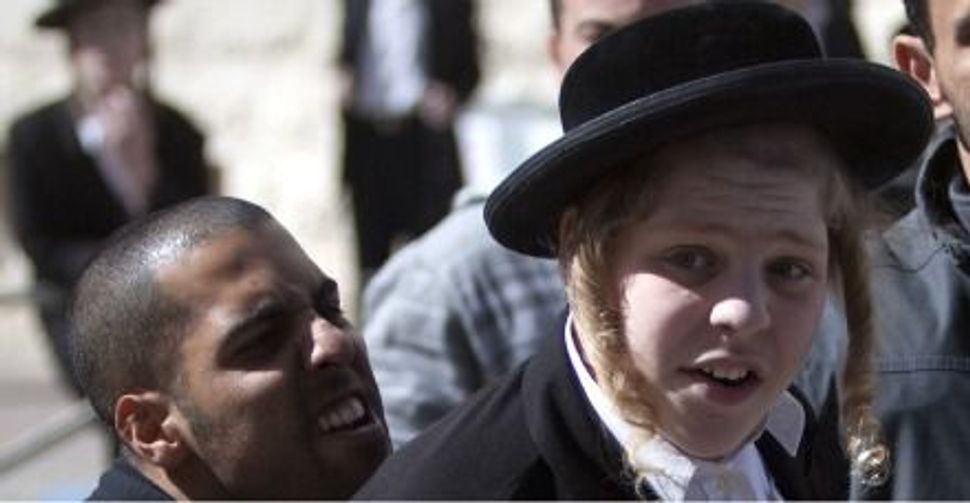 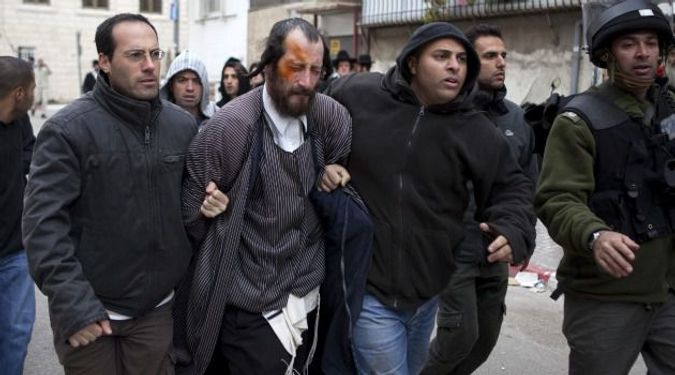 Bloody Streets: Violence between rival gangs is common in Jerusalem. The groups mix allegience to Hasidic sects and extortion of businesses. Image by getty images

In late October, a gang of 15 to 20 thugs armed with metal rods and clubs attacked a man on the street. They beat him, causing serious internal injuries, a head wound and cuts. And then they drove away in the commercial truck in which they came, leaving the man lying in a pool of his own blood.

The attack took place in Jerusalem, and the victim, Avraham Hirschman, is one of the most hated men in Israel. He a leader of a Haredi street gang cum mafia known as the Sicarii. The name is borrowed from the gang of assassins during the first-century C.E. Jewish revolt against Rome that murdered many of those Jews who wanted to sue for peace. The revolt, of course, would end with the destruction of the Second Temple. Today?s Sicarii are best known for extorting businesses in Jerusalem?s Mea Shearim and Geulah neighborhoods, for terrorizing Modern Orthodox grade school children in Beit Shemesh and for repeated attacks on police in Mea Shearim ? including hurling cement blocks off rooftops at police this past Simchat Torah. The blocks narrowly missed their targets.

Hirschman?s attackers were allegedly Gerrer Hasidim. Known on the Haredi street as ?Gerrorists,? they have attacked Sicarii leaders before, and they also have beaten up a messianist Chabad rabbi in Ashdod and trashed his synagogue, assaulted Hebrew Christians and set Hirschman?s occupied apartment on fire after first dousing his infant child with gasoline. Thankfully the baby did not ignite, and Hirschman?s family escaped unharmed.

The Gerrorists and the Sicarii are all Haredim, ultra-Orthodox Jews. Ger ? the largest Hasidic group in Israel ? is considered to be a pro-Zionist Hasidic sect. The Sicarii are mostly from virulently anti-Zionist Neturei Karta families. The two groups are fighting over possession of a valuable plot of Mea Shearim real estate when the housing shortage in Jerusalem?s Haredi community is at an all-time high. The Sicarii are mostly old-line Jerusalem, with a few being Hasidim, and they consider the property theirs. Ger originated in Poland, and they look at the buildings ? known as Batei Warsaw ? to be rightfully theirs, because they consider their line of rebbes to be the ?kings? of Jewish Poland and its transplanted communities worldwide.

The Hasidic Village of New Square, in upstate New York, saw a year of violence against village dissidents culminate in May with an attempted arson of a dissident?s home. The dissident, Aron Rottenberg, was seriously burned over the majority of his body. His attacker, Shaul Spitzer, the 18-year-old butler of the Skvere Rebbe, the ?king? of New Square, suffered serious burns on his hands and arms. Spitzer is now facing attempted murder charges.

There is a tradition of violence among the Hasidic sects that goes back to 19th-century Eastern Europe in the decades before the mass exodus of Jews to the United States. Hasidim from rival groups rioted, for example, when the Talne Hasidim adopted small differences in the Kedusha prayer. Talne Hasidim also staged yearly pogroms against Breslov Hasidim when the latter came to visit their founder?s grave in Uman for Rosh Hashanah. Sources describe mobs of armed Talne Hasidim breaking into the small Breslov prayer hall, where they proceeded to savagely beat the Breslov ?heretics.? Talne also had a custom of marching, hundreds of Hasidim strong, from town to town in a military-style parade led by their rebbe. The parade would stop in towns where Talne had a foothold but the rabbinic structure and majority of the populace followed other Hasidic rebbes or those who were Mitnagdim, non-Hasidic ultra-Orthodox Jews.

Passing out vodka as if it were water (something common in some Hasidic groups, like Chabad, to this day), Talne Hasidim would stage a days-long street party that culminated in a public address from their rebbe, after which local Jews were asked to pledge their loyalty to him. Talne Hasidim would then demand that non-Talne rabbis, ritual slaughterers, ritual circumcisers and other community employees be fired and replaced with Talne Hasidim. The local Jews who refused to pledge allegiance to the Talne rebbe, and community leaders who refused to fire non-Talne ritual employees, were then beaten until they submitted, fled, lost consciousness or, in some cases, apparently lost their lives.

While Mitnagdim were sometimes violent, they favored handing over Hasidim to local corrupt police, often on charges the Mitnagdim had manufactured out of whole cloth. And both Hasidim and Mitnagdim used every dirty trick in the book ? including violence, when they could get away with it ? to destroy Maskillim, the Jews who supported the Enlightenment and the early Reform movement.

This violence was and remains an outgrowth of fundamentalism that promises followers sole possession of truth and of the closed (or nearly closed) communities in which these Haredi fundamentalists live. Unless we provide a nonfundamentalist framework for Haredim to independently learn about the science and history that might cause them to question their absolutist beliefs, the violence will continue.

Why should we care?

Because the Haredi birthrate is extremely high and the non-Orthodox Jewish birth rate is extremely low. Within a few generations, Haredim might be the Jewish majority. They will control Israel?s destiny. And they will also swallow up many non-Haredi and non-Orthodox Jews who find no other viable options for affiliation. That means your descendants may very well be Haredi. They will live in closed Haredi communities. And the violence that hopefully disgusts you may be directed at them ? or, perhaps even worse, it may come from them. If for no other reasons than these, stopping Haredi violence should be an urgent Jewish communal priority.

Shmarya Rosenberg is a blogger who publishes FailedMessiah.com. He is a former Chabad Hasid.