Talking With a Terrorist: An Endless Call to India 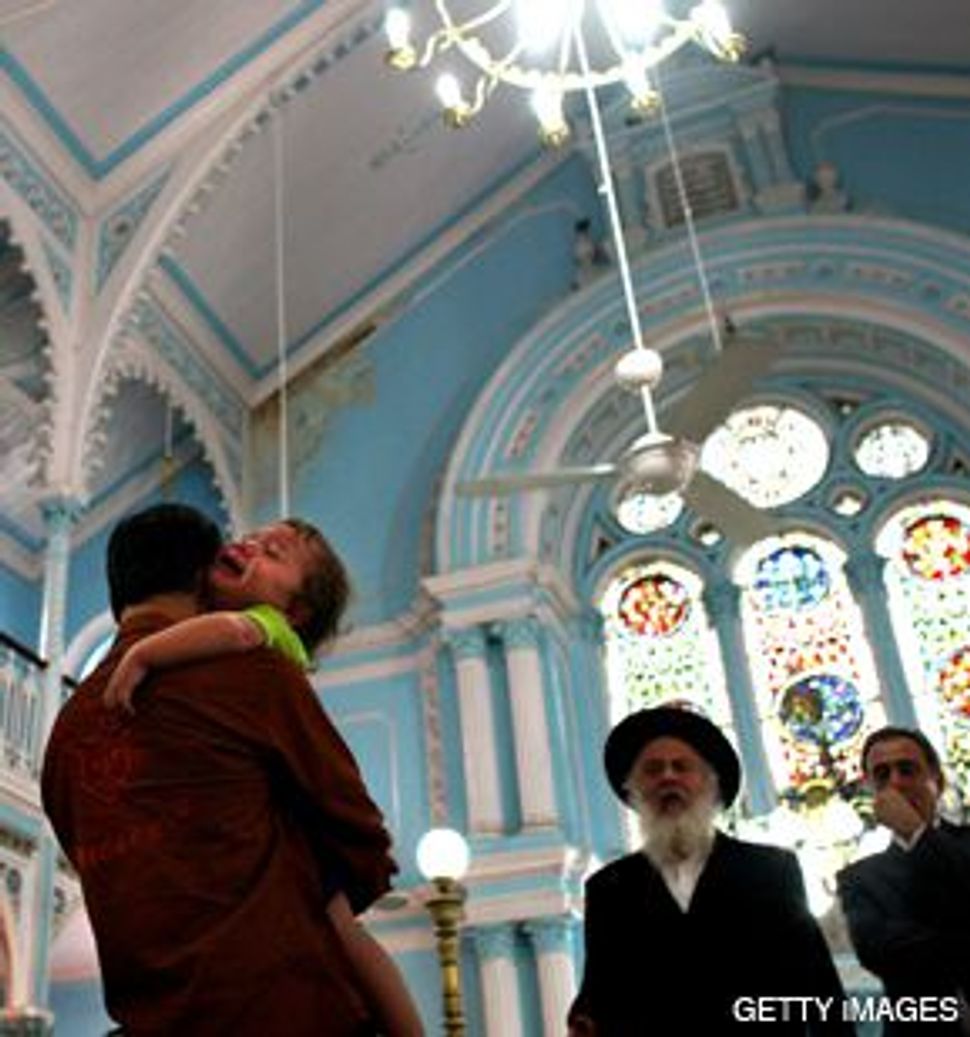 On the Wednesday night before Thanksgiving I was in my office in New York, preparing notes for a finance class I was set to teach the next week. I grew up in Mumbai, India, and I had heard earlier in the day from my brother about the terrorist attacks in my hometown, but I had thought it was going to be over quickly. Then my nephew called. He told me that the Chabad-Lubavitch movement was looking for Indian language speakers to help them keep track of developing news after terrorists took over the Chabad house in Mumbai. This was the beginning of a nearly 17-hour ordeal that soon had me in prolonged negotiations with the terrorists holed up in the Jewish center, moving toward a deathly denouement. 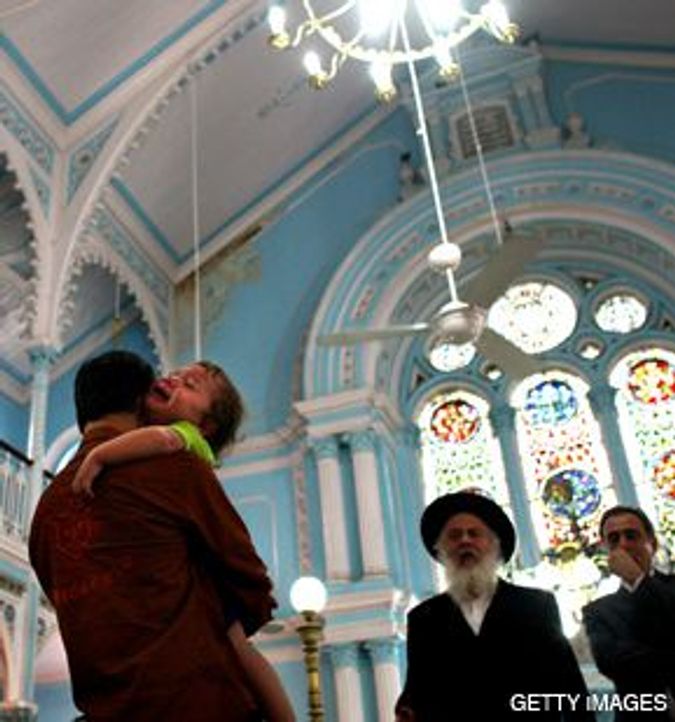 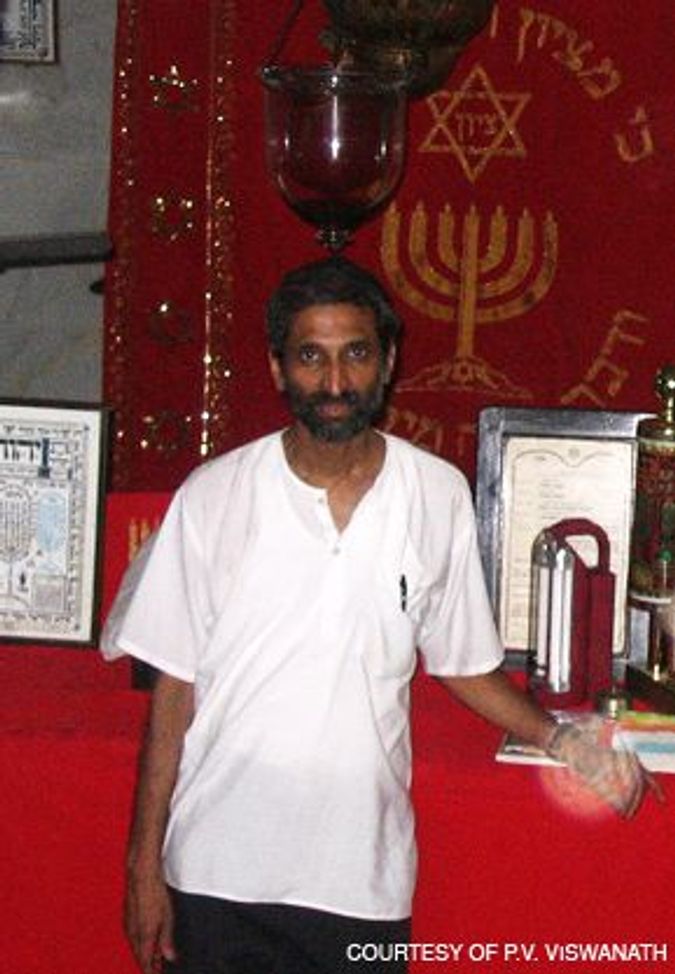 INTERPRETER: P.V. Viswanath, who worked as interpreter during the terrorist siege, shown here during a visit to an Indian synagogue.

I was uniquely suited to help out, being both an Orthodox Jew and an Indian; in India I am known as P.V., in Jewish circles as Meylekh. I know several Indian languages, including Hindi and Urdu, thanks to the 20 years I spent growing up in Mumbai, then called Bombay. During recent professional travels around the world, Chabad emissaries have been unfailingly helpful to me, and I wanted to give back. But the attack on Nariman House in Mumbai hit even closer to home — I had visited Rabbi Gavriel Holtzberg, the Chabad emissary in Mumbai, just last summer when I was there with my son. Holtzberg and his wife had hosted us then and at the previous Passover. And so I was happy to have an opportunity to help out, even though the circumstances were not pleasant.

Rabbi Levi Shemtov, a Chabad emissary in Washington, D.C., had been among the many Chabad leaders trying to dial through to Holtzberg’s various phones since the terrorists entered the Nariman House. Sometime before 10 p.m. New York time, somebody on the other end had picked up the phone and identified himself as an Urdu speaker. When Shemtov found out that I was available and could speak Urdu, he called again and put the three of us on a conference call.

This was around midnight, and when I got on the line I heard a low male voice. Following Shemtov’s promptings, I asked the person where he was. “You know where I am speaking from,” he said. (I did not take notes during these events; my account of the conversation is from notes that I jotted down afterwards.) This was the sort of uninformative response that was typical over the course of the next hours.

Given the long distance, and noise on both ends, at times I wasn’t sure exactly what my interlocutor was trying to tell me, and I had to ask for clarification. His voice was so soft that I assumed the connection must be bad, but Shemtov said he could hear me easily and asked me to speak more softly so as not to agitate the man on the other end. Thinking upon all of this later on, I realized there had hardly been any tension in the voice at the other end — he had been calm and collected.

I had never before been in a situation of this sort, and when I was asked to get on the phone, I had no idea what was waiting for me. There was a lot of trepidation in my mind — would I understand his dialect of Urdu, would I say the right things at the right time, would I perhaps upset him and precipitate some undesirable events.

At first I had a bit of difficulty with the speaker’s Urdu. Urdu is the national language of Pakistan, but also by Muslims in India and I could not pinpoint where the speaker came from. As the conversation continued, however, I got a better feel for the dialect and style of Urdu, my confidence increased.

Although we didn’t know the speaker’s name in the beginning he later told us it was Imran; presumably, this was the same Imran Babar who was reported as having called a television station in New Delhi. Right at the very beginning, we asked Imran if everybody was all right. We asked him this several times and each time he said everybody was all right. At one point, we asked him if all the people there were conscious, because we had heard reports that some of them were unconscious. Imran told us that everybody was fine: Nobody was hurt and they had not touched anybody. “We haven’t even slapped them around,” he said.

The bigger mission for us, on the call, was to try and find out what Imran wanted. His one demand was to speak with someone from the Indian government.

“Put us in touch with the Indian government and we will let the hostages go,” he said.

Finding anyone to help us out was not easy. When we tried to call the Indian authorities we were bounced from one office to another. As this was happening, Imran made reference to the reports that some of the other attackers in Mumbai had been captured. He said he wanted his friend who had been captured brought to him. He added, once again, “Do this, and we will let your friends go.”

During a later conversation, we asked him how many terrorists there were. He expressed some annoyance at this question and said, “It seems like you’re not interested in saving your friends, that you’re asking all these irrelevant questions. Keep to business matters and think of how to do what we are asking you to do.”

Even during the few times that Imran expressed annoyance and uttered low-level threats, it didn’t sound as if he felt pressured in any way. The police had cut off electricity to the Nariman House and had surrounded the building on all sides, including from the air, where helicopters were keeping a watch, but Imran gave no indication of being rushed.

Throughout the night, we did not always have Imran on the phone, but I stayed on the phone constantly with Shemtov, waiting for a connection to be established. When I needed to, I would dash to the bathroom and quickly return. At the same time, we got steady reports from other Chabad rabbis who were talking with sources in India and law enforcement authorities in the United States and India.

At long last we did find an Indian police official ready to join our call, but when he did, we lost our connection. During the final call with Imran, at 5:30 on Thursday morning, we told Imran that we would try and find somebody in the Indian police to negotiate with him. Unfortunately, we did not succeed in finding anybody else in Bombay, nor were we ever able to contact Imran again.

During the night we had also tried to reach somebody in the State Department or the FBI to help in our ordeal. Ultimately an FBI team did show up, providing tips for dealing with a hostage, but I never had a chance to put their advice into practice.

I went home around 3 in the afternoon, having waited another seven and half hours in the hope of making further contact with Imran. I had spoken with a friend of mine in Mumbai, who had sheltered the nanny of the Holtzberg’s — the nanny who had escaped Nariman House with the Holtzberg’s son. She said that the Holtzbergs had been unconscious when she left, so I did not hold out great hope. It was only the next day that I heard the definitive reports that all the hostages had died.

When I did make it home, I had been awake for about 32 hours, and should have been exhausted for Thanksgiving dinner. But I found something unexpected — a spiritual energy. I had interacted with so many people in Chabad, that night, people who were completely focused on doing whatever was necessary to help the hostages, people with complete confidence that God would bring about a favorable result. I had originally responded to Chabad with the intention of providing them with assistance, but I actually left with the feeling that Chabad had given me something.

P.V. Viswanath is a Professor of Finance in the Lubin School of Business at Pace University, New York. This article is adapted from a version that is also appearing in the Yiddish Forward.

Talking With a Terrorist: An Endless Call to India