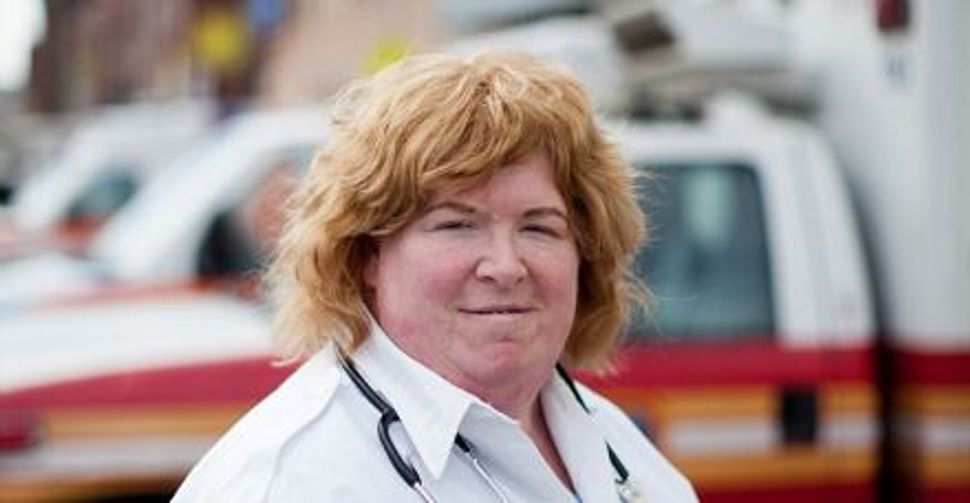 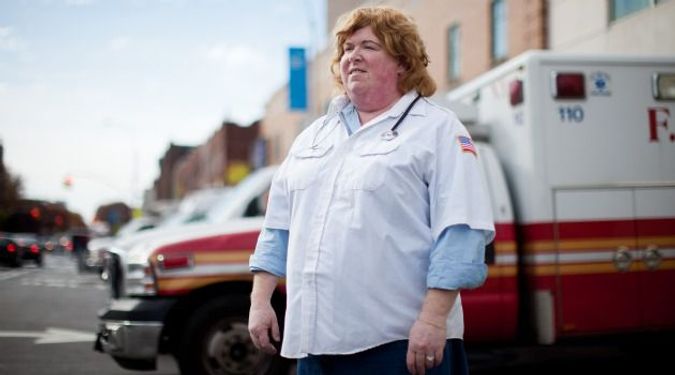 Modest Lifesavers: Yocheved Lerner-Miller is one of the women pushing to join the Hatzalah ambulance service. Image by claudio Papapietro

Miriam was home alone in Brooklyn’s Hasidic neighborhood of Boro Park when she birthed her second child, her water breaking unexpectedly and the baby slipping out along with it. Moments later, seven men barreled through the door. One of them took the baby, and another asked Miriam to lie down so that he could check between her legs for the placenta. Then, the technicians — members of the volunteer ambulance corps Hatzalah — whisked her away to the hospital. Even though her male neighbor had called the men in an effort to help, Miriam said the experience was “traumatizing.”

In the ultra-Orthodox world in which Miriam lives, unmarried men and women are barred from touching, let alone exposing their bodies to one another. Though the incident occurred 15 years ago, Miriam (who asked that her name be changed to protect her privacy) remembers every detail of that uncomfortable visit. In particular, she remembers wishing that women had attended to her, instead of men.

“I think that a woman who has to give birth at home should at least have the comfort of another woman at her side,” she said.

Now, if a group of women in Brooklyn has its way, Miriam’s wish will come true. Calling themselves Ezras Nashim — an informal term for the women’s section of a synagogue — the group of 60 has been agitating since last year to join the ranks of the Brooklyn branch of the Hatzalah, one of the most venerated Orthodox institutions in America. Though the women are engaged in a seemingly feminist act by clamoring to join a boy’s club, they don’t see it that way. Instead, they say, they are modesty crusaders, speaking out for the cause of decency.

“It’s not about Susan B. Anthony and standing up and getting out there,” Ezras Nashim spokeswoman Rachel Freier said. “Feminism is a secular concept.”

So far, the Hatzalah leadership is unconvinced. “There are many things at which women are superior,” Heshy Jacobs, a member of Hatzalah’s executive board, reportedly noted on the Vos Iz Neias? website. “But when it comes to speed and physical strength, which are both of the essence in a medical emergency, it is a proven fact that men have an advantage.”

Not so long ago, women were welcomed into the ambulance corps. Hatzalah was founded in Brooklyn’s Williamsburg in the late 1960s to aid Brooklyn’s Yiddish neighborhoods that were underserved by the city’s English-speaking emergency technicians. At the time, several dozen women created an all-female division of Hatzalah called “Hatzilu,” to serve women of the community. But the effort was short-lived. Fearful of mixing genders among the technicians, a group of local rabbis ordered Hatzalah to disband its female wing after just three months of operation.

“We weren’t happy,” an original member of Hatzilu told the Forward. “We wanted to help the women. We had to accept it as is.”

Over the years, Hatzalah grew into a worldwide volunteer network, with branches in Canada, South America, Israel and beyond. The women of Hatzilu, meanwhile, continued to train hundreds of female emergency medical technicians in Brooklyn who went on to work as nurses in Hasidic summer camps or to volunteer as technicians in secular ambulance corps. But it wasn’t until last year that a Brooklyn newcomer took up the mantle to reintegrate Hatzalah.

A 49-year-old music teacher and volunteer EMT, Yocheved Lerner-Miller, moved to the neighborhood of Kensington to entrench herself and her 14-year-old daughter in the world of ultra-Orthodox Judaism. Lerner-Miller is a balaat teshuva — a secular Jew who recently became more religious — and though she wears the shin-length skirts and the wig of a traditional woman, she lives on the cultural periphery of Orthodox Brooklyn, not quite assimilated and not quite a foreigner.

Last year, in an attempt to meet her Orthodox neighbors, she logged on to the website Shabbat.com, which helps Jews find a home for a Friday night meal. On the site, Lerner-Miller met a male yeshiva instructor who lives in Flatbush. In a phone conversation with her would-be host, she told him that she was a trained EMT, volunteering on ambulance calls during her free time. “An EMT? A woman?” Lerner-Miller said the man asked her. Then he paused as the thought sunk in. “Women feel more comfortable with women,” he said. “Let’s call a meeting.”

Lerner-Miller called another friend who worked as a camp nurse, and they and the man met in her home in Kensington to speak about integrating Hatzalah. Soon enough, two more women joined. And then a steady trickle. In May, the group sent out postcards with a photo of a baby, inviting local women to a meeting: “Are you interested in helping women in women-related emergencies?” The group’s following advertisement, placed in an October issue of a Hasidic circular called Weekly Link, was bolder: “With gratitude to Hashem, we will be launching our Pioneering Movement.”

Today, Ezras Nashim boasts some 60 women, with dozens undergoing EMT training in preparation for their hoped-for entry into Hatzalah. The women say their admission will be for emergency births only, leaving the other tasks to the men. Though, Lerner-Miller explained, the yeshiva instructor has faded to the background — she said he prefers not to speak to the press — he periodically calls her to ask about the group’s progress.

Yet now that the women have coalesced into Ezras Nashim, their real work has just begun. In addition to petitioning Hatzalah for entry into its ranks, the women must convince Brooklyn’s greater Orthodox community of the validity of their cause. In Freier’s words, the battle is one of “modesty versus modesty.” The question now is which kind of modesty is more important — the modesty of women in childbirth or the modesty of the all-male Hatzalah?

“Is it feasible? Can it work?” Freier asked. “We are not talking about a simple matter; this is a lifesaving organization.”

Ezras Nashim could not have chosen a more perfect representative than Freier. A 46-year-old practicing real-estate attorney from Boro Park, Freier embodies the underlying challenge of Ezras Nashim itself — the tricky balancing act of asserting oneself while maintaining the appearance of unassertiveness. Freier wears form-fitting blouses over long-sleeved black shirts; she also sports a cropped auburn wig and heavy lip liner. In her Coach pocketbook she carries a small picture album of her son’s wedding, with photos of the men in her family in full Hasidic garb. The album is Freier’s religious ammo in the secular work world. When a male judge takes offense at the fact that Freier won’t shake his hand, she shows him the album by way of explanation, as if to say, “You see, I really am Hasidic.”

Freier took on the cause of Ezras Nashim in June, providing the group with a public face and pro bono legal advice. When her early overtures to Hatzalah’s CEO, Rabbi David Cohen, went unanswered, she took her case to the greater Hasidic public, appearing on New York Assemblyman Dov Hikind’s radio show in Brooklyn. Freier described the goals of Ezras Nashim using the language of tznius, or modesty, relating the shame that women feel at being handled by men in childbirth, particularly male neighbors and friends whom they encounter over and over again. The fact that the Hasidic enclave of New Square, N.Y., a town in which women are barred from driving, integrated its Hatzalah three years ago buoyed her case.

At first the message seemed to resonate with Hikind. “We have a beautiful community here,” he told Vos Iz Neias. “We go to the nth degree for modesty. In this situation, it just makes sense.”

But when Freier’s efforts were painted in the New York Post as an “attempt to break through a decades-old barrier,” her appeal for modesty struck some as rather immodest. Facing criticism for pleading her cause in the secular press, Freier dialed back her message, writing a guest post on the Orthodox blog Daas Torah: “I was and continue to be very careful and deliberate in my discussions with the media. I explained that this issue is not about feminism, rather it is about women advocating for their modesty and reclaiming what has been their job for thousands of years dating back to the meyaldos [midwives], Yocheved and Miriam — assisting women in childbirth.”

“What [Freier]is doing is reactionary; she is trying to turn back the clock on the separation of the sexes, to increase the separation of the sexes,” said Daas Torah blogger Daniel Eidensohn, an Orthodox psychotherapist in Lawrence, N.Y. “So here is a person who is in essence being very conservative, who is being attacked not because of her idea per se, but because of the fact that it represents a change in the status quo. The Orthodox community is leery of the idea of change of the status quo.”

Even Hikind seems to have cooled in his backing of Ezras Nashim. He declined an interview with the Forward, relaying in an e-mail message: “It is up to the rabbis and leaders of the community, who have been working closely with [Hatzalah] for all these years, to decide if they want to make a change to the existing protocol. It is not up to me.”

Hatzalah, for its part, hasn’t budged. “This was discussed years ago by the rabbinic board. They said not to do it, and that’s pretty much where we stand,” Cohen told the New York Post. Cohen did not return several phone calls from the Forward seeking comment, but a Hatzalah receptionist told the Forward that Ezras Nashim’s efforts were “a big to-do about nothing.”

“We have never been contacted by any women’s group or any woman regarding membership in Hatzalah,” she said. “And you are hearing that from a woman.”

Today, Freier and the women of Ezras Nashim are taking a different route, quietly contacting influential local rabbis over the phone and in person to explain the need for women in Hatzalah. According to Lerner-Miller, it seems to be working: “The rabbi was on speakerphone, and he went from being not overtly hostile to not happy with this to, after a candid discussion, saying, ‘What can I do to help this cause?’”

As for Miriam, the memory of being swarmed by male technicians at the birth of her second child propelled her to join Ezras Nashim as an EMT and a doula, a trained birthing coach.

“I think it is still at the very early stages,” she said of the group’s efforts. “I think [the community] looks at it that Hatzalah has been great without women for so many years. We are working on the awareness of why women are needed.”

Then she added: “I know it is going to happen. It is time for it to happen.”