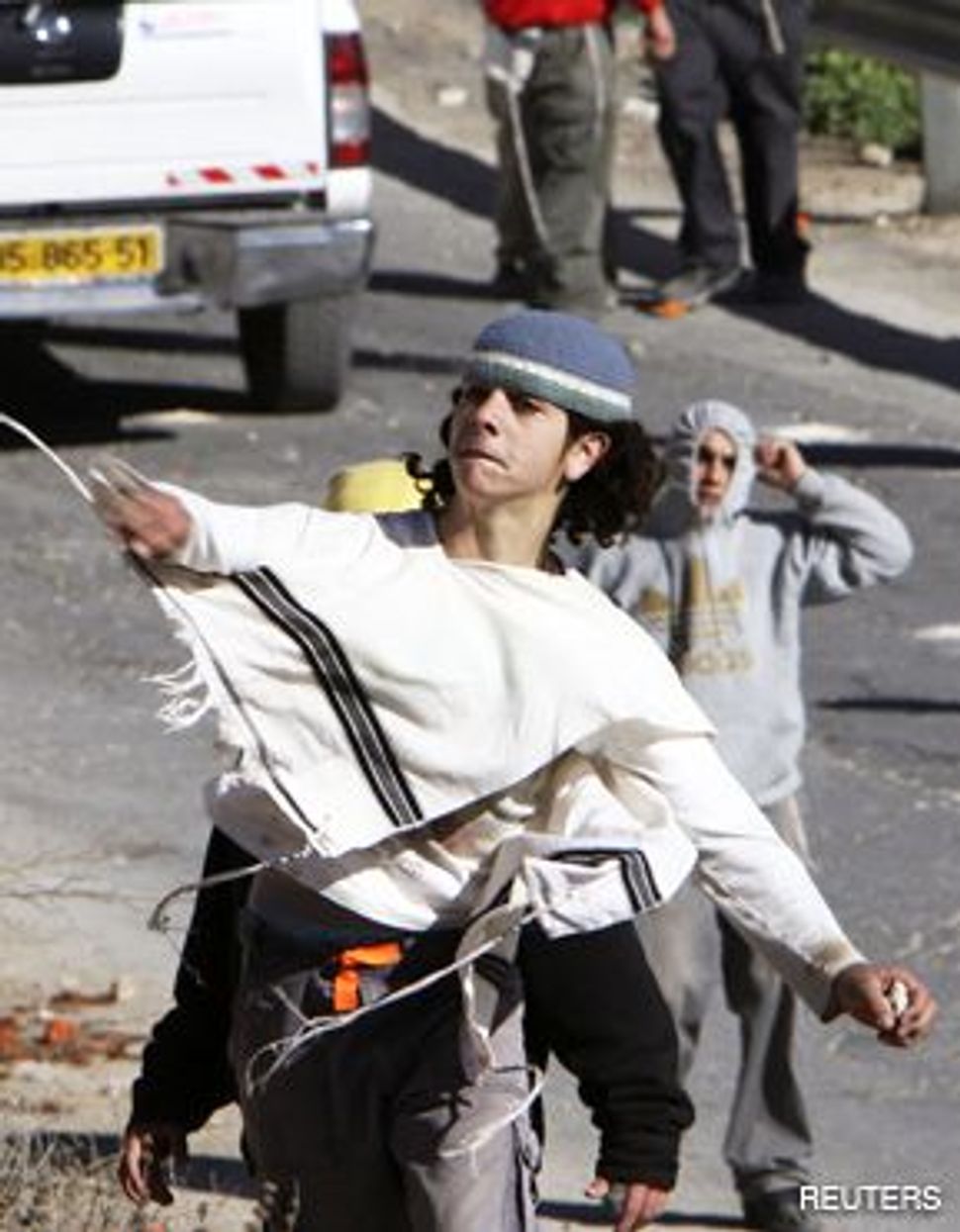 BACKLASH: A young Jewish settler in Hebron thows stones at a Palestinian house in Hebron in the West Bank after Israeli security forces forcibly evacuated his compatriots from a home there.

Jerusalem — To the Jewish West Bank settlers who attacked Palestinian people and property in Hebron this month, it was Operation Price Tag — an attempt to increase the price to the Israeli government of evacuating them from ground they view as sacred. 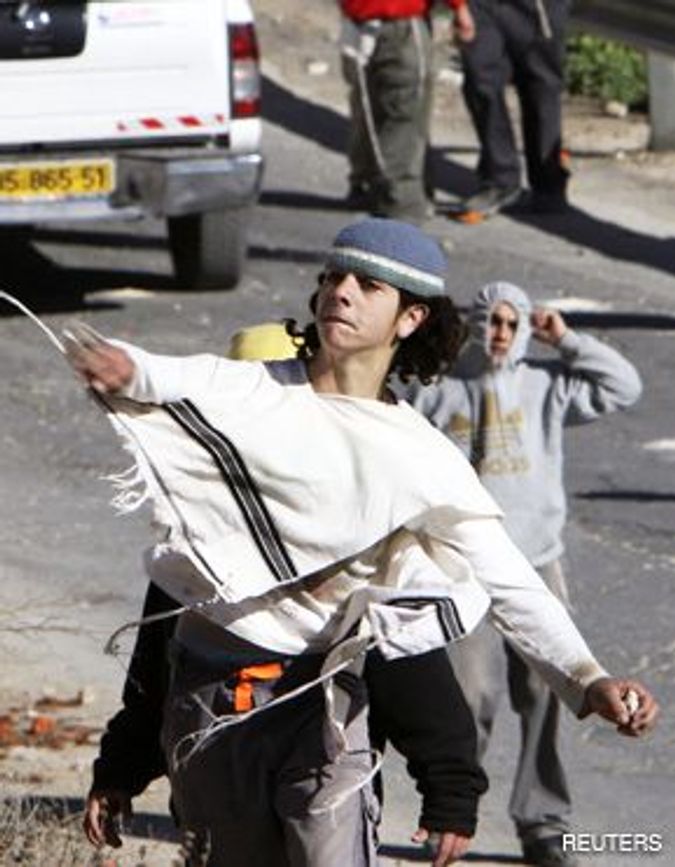 BACKLASH: A young Jewish settler in Hebron thows stones at a Palestinian house in Hebron in the West Bank after Israeli security forces forcibly evacuated his compatriots from a home there.

To the prime minister of Israel, it was a “pogrom.”

For all concerned, the decision of the settlers to riot December 4 after Israeli security forces evicted them from a disputed Hebron property highlighted a new tactic by hot-headed young followers of some of the Israeli-occupied West Bank’s most extreme Jewish leaders: violent retaliation, along with a conscious disdain for secular law to stop further government-ordered evacuations on the West Bank.

The violence, which included setting a Palestinian home afire, left at least two Palestinians injured and shocked much of the Israeli public. But it was not the first time. Previous settler riots in the West Bank have gone less publicized, including one less than three months earlier that outgoing Israeli Prime Minister Ehud Olmert also likened to a pogrom.

But even as Olmert condemned them, others cheered them on. And three in particular have risen to the surface as the prime figures from whom this loose, informally structured cohort of defiant young people take inspiration and encouragement, if not direction:

The three have no formal links. But this merely underscores the loose, informal nature of the movement they embody.

It was the Israeli army’s evacuation of a settler base in Hebron that sparked the latest round of violence. Since March 2007, dozens of young activists and yeshiva students, as well as 25 families, have lived in a building they call, without irony, Beit Hashalom or the House of Peace. The Hebron Jewish community claims to have bought the building from its Palestinian owner, Faez Rajabi, for about $700,000, according to the community’s Web site. But he denies having sold it.

Last month, Israel’s Supreme Court decided that, pending a ruling on who owns the property, the settlers had to leave, and the State would become temporary custodian. On December 4, in a relatively smooth operation, the army evacuated the house and sealed the doors.

The backlash was swift and harsh. In Hebron, a nearby Palestinian home and several cars were torched, a Muslim cemetery was desecrated, and there were clashes between settlers and Palestinians, during which a Palestinian father and son were shot. Reports on their condition are unavailable. Across the West Bank, roads were blocked.

The tactics reflect a feeling in the settler movement that resistance to Israel’s 2005 evacuation of settlers from Gaza was too weak, and that the stakes must be raised as the government considers territorial compromise in the West Bank.

It is “a sort of anarchist behavior,” said Danny Dayan, head of the Council of Jewish Communities in Judea and Samaria — the long-established West Bank settlers association that is despised by the young extremists for its willingness to negotiate with the government and, ultimately, obey its laws. “They don’t have an established leadership, but there are people who encourage them,” Dayan said.

Dayan singled out one of them as Weiss. Although she admitted that her followers have a nonchalant attitude toward the law, she sees that as a positive. “They are not afraid of prison, they are not afraid of trials, they just express loyalty to the land,” she told the Forward.

Wolpe, also interviewed by the Forward, also scorned the idea that the settlers had carried out a “pogrom.” Rather, he insisted that they were the injured party. While claiming that he does not endorse violence, Wolpe said this of those who perpetrated it: “I understand them, and you can blame only our government that brought them to this point.”

The settlers are cornered, he said, and controversial practices such as the Price Tag policy are a legitimate means to his overall aim — “that the disengagement should not happen again in Judea and Samaria.”

Wolpe, 60, from Kiryat Gat south of Tel Aviv, is a leader of the Chabad faction that believes the late Lubavitcher rebbe, Menachem Mendel Schneerson, to be the messiah. While the Chabad mainstream tends to keep out of politics, Wolpe believes that the rebbe ordered him to promote a far-right agenda in Israel.

While his belief system is seemingly esoteric, his organization, SOS-Israel, has ensured that his views are spread widely. A newsletter, theoretically about the week’s Torah portion but focusing mainly on politics, is distributed to thousands of mainstream synagogues across the country every Sabbath.

Wolpe has achieved such renown that he has created his own political party, Eretz Yisrael Shelanu [the Land of Israel is Ours] and is confident that it will win five of the Knesset’s 120 seats — presuming a legal effort by the dovish group Peace Now to disqualify him on the grounds of racism is unsuccessful.

As far as Wolpe is concerned, the government comprises those who “sit here and represent the terrorists.” President Shimon Peres “is representing the position of the terrorists,” he said.

Despite their lack of formal affiliation, he described Marzel and Weiss as among the “real lovers of the Land of Israel.”

Marzel, a Hebron-based educator, sees himself as the successor to the late Meir Kahane, the far-right rabbi and politician whose Kach party was deemed racist in 1986. The party was banned then for advocating the mass expulsion of Arab citizens of Israel from the country. Marzel, 49, who was born in Boston and moved to Israel as a baby, was Kahane’s right-hand man.

He is considering running in Wolpe’s new party. Both men have their strongest following in the settlements around Nablus.

Like Wolpe, Marzel insists that he shuns violence; however, he strongly endorses the Price Tag policy. An government official who orders a settler evacuation, he said, “commits a crime against your people [and] they have to pay a price, and [with] a heavy price they will think twice about committing the crime.”

The Jews in Hebron are constantly under attack by Palestinians, Marzel said, and can be expected only to “retaliate.”

He added: “The Jews of Hebron are not Christians and don’t give their second cheek.”

Though the political party he ran with Kahane was deemed racist, Marzel argues it is the government that is racist for hampering Jewish settlement. The Hebron evacuation, he told the Forward, was “pure racism. It is not legal and is part of the move by the liberal leftist people of Israel against those loyal to the land.”

On December 14, he is expected to march with 100 Israeli flag-waving activists through the Arab city of Umm al-Fahm near Haifa, a plan that has provoked the fury of the city, which promises to block them with a human chain. The marchers will be from his organization, the Jewish National Front, which he claims has “thousands” of members.

Questioned about the march’s objective, Marzel replied: “We have a cancer in our body capable of destroying the State of Israel: people who support terrorism, Hamas, the PLO [Palestine Liberation Organization], and these people are in the heart of Israel, a force capable of destroying Israel from the inside. I am going [in order] to tell these people — the Land of Israel is ours.”

Weiss, the third influential figure among far-right settlers, is a former mayor of Kedumim, a West Bank settlement southwest of Nablus, and mentor to the so-called Hilltop Youth. These are youngsters who live in small West Bank outposts that they refuse to protect with fences. It is a symbolic gesture to indicate that the whole West Bank — not only settler enclaves — is Jewish. Weiss claims that they number 10,000.

She sees herself as the standard-bearer of the true ideology of Gush Emunim, the main religious-Zionist settler movement that she left 20 years ago amid criticism that she was too radical. In her opinion, it is Gush Emunim that became too moderate.

Senior political and military figures reportedly believe that Weiss, who lived in the Hebron building for three weeks, is responsible for much of the violence after its evacuation. According to Israeli media, former Labor lawmaker Ephraim Sneh has written to Defense Minister Ehud Barak, demanding that Weiss be jailed.

Weiss, 63, is pleased that the new generation in the West Bank is more radical. “The adults are still prepared to forgive” the Council of Jewish Communities in Judea and Samaria, she said. “For the young generation, this is out of the question. They consider its failure to resist the evacuation an act of treachery.”

“It’s very easy to work with these people,” she said. “But there’s a criterion you have to work by: 100% loyalty to the Land of Israel. Deviation from that in action or words will make them revolt, demonstrate, and if you tear down their building, they will build it up even 50 times.”

Experts believe that attitudes such as these will make opposition to future territorial compromise far more violent than the Gaza disengagement.

Gershon Baskin, founder and CEO of the dovish Israel/Palestine Center for Research and Information, told the Forward he does not believe that extreme settlers will achieve their aim and halt peace agreements, but he predicts they will pose serious security concerns.

“There are fewer illusions that normal passive resistance prevents people from being removed from their homes, and there may be people resorting to extreme methods that are unthinkable in normative Israeli society,” he said.