The Doors Are Open to All at Rabin Medical Center 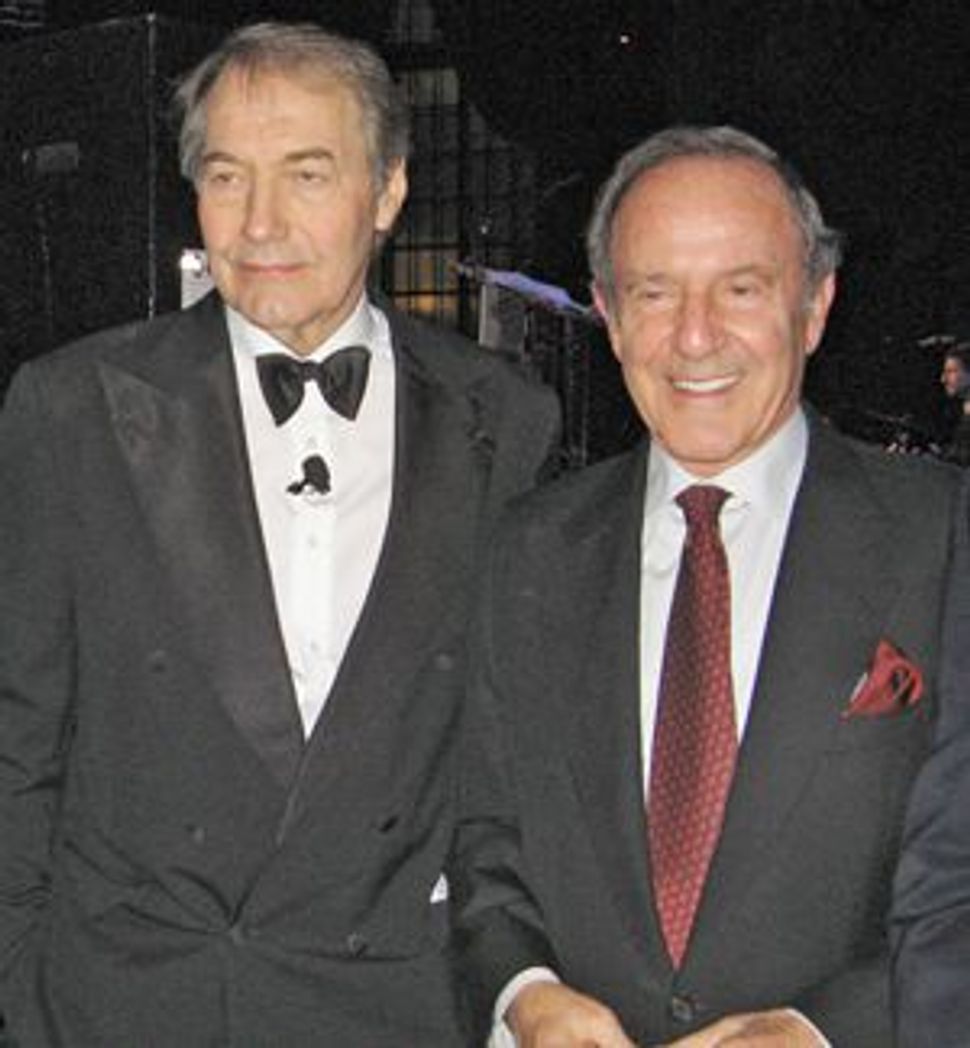 “When a patient checks in, no one asks their religion [or] affiliation,” said Abraham “Barry” Cohen, chairman of the American Friends of Rabin Medical Center, in an address at the organization’s November 13 “The Best of New York Meets the Best of Israel” gala, held at Cipriani 42nd Street. “If others acted this way, we’d have peace.”

Board member and past AFRMC board chairman Stephen Siegel received AFMRC’s Yitzhak Rabin Excellence in Leadership Award. Jerusalem-born Eli Hurwitz, chairman of the Board of Teva Pharmaceuticals, was honored with the Yitzhak Rabin Visionary Leader Award; his son Haim Hurwitz accepted on his behalf. The elder Hurwitz died in Tel Aviv on November 21. In presenting the award, Cohen said that Teva Pharmaceuticals “is known as Israel’s ‘national company’ and has become one of the world’s most respected pharmaceutical manufacturers.”

Television personality Charlie Rose was the evening’s host, and his question-and-answer session with media mogul Mortimer Zuckerman was unique for its candor. “It’s the first time an American president has not visited Israel,” Zuckerman said. “Would you support the president?” Rose asked. “Depends on who’s running,” Zuckerman replied. “[At this moment] I’d support Mitt Romney over Obama.” 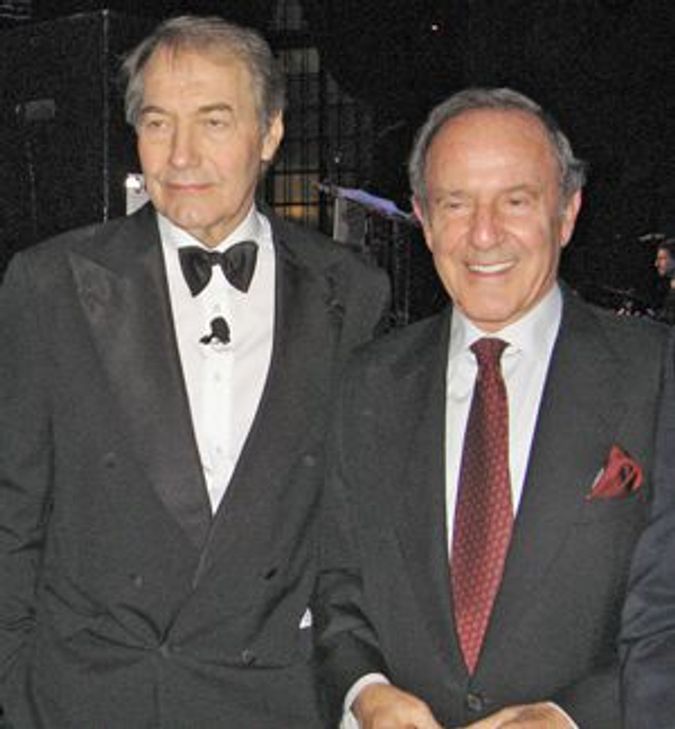 Responding to a question from Rose about the weak economy, Zuckerman cited a roster of governmental agencies that are in the business of tallying the “unemployed, underemployed and part-timers” before arriving at a bottom-line assessment: “Forty-eight million are now living below the poverty line.” When Rose — who joshed: “I call [Zuckerman] my rabbi. He teaches me things” — suggested he run for president, Zuckerman laughed. “When this administration is ready for this Canadian-Jewish candidate for president, call me,” he said.

AFRMC President Nava Barak touted the Rabin Medical Center as “crucial… to all casualties — including victims of rockets aimed at Ashkelon.” Dr. Eyran Halpern, Rabin Medical Center’s CEO, said, “Rabin practices medicine without borders,” and announced a $100 million five-year expansion plan. Affiliated with the Tel Aviv University Sackler School of Medicine, the Rabin Medical Center is Israel’s largest medical institution, serving as a referral center for patients throughout the country and the Middle East. With close to 1 million patient visits a year, it boasts a staff of 4,500.

The gala was orchestrated by AFRMC Executive Director Joshua Plaut. That evening, auctioneer Jennifer Roth, senior vice president of the Fine Arts Department at Sotheby’s, helped raise funds with an auction at the gala for equipment, from oxygen masks to EKG machines, for the new Emergency and Trauma Center at the Rabin Medical Center.

“Aryeh and Richard were cut from the same cloth,” journalist Kati Marton said as she presented the social justice award named for her late husband, Richard C. Holbrooke, to Aryeh Neier, president of the Open Society Foundations, at Blue Card’s 77th Anniversary Dinner Benefit, held on November 14 at the Fifth Avenue New York Public Library. She continued, “Children of German-Jewish refugees — first generation in Aryeh’s case, second in Richard’s — they shared a visceral distaste for bigotry and an appetite for combating it.” Marton, a journalist, is the widow of the late Richard C. Holbrooke, an American diplomat whose most recent post was President Obama’s appointment as America’s special envoy to Afghanistan and Pakistan. She said, “Aryeh, like Richard, is fearless about speaking out to the powerful and uses his pen as forcefully as Richard did.”

Stanley Stone, executive vice president of the Jewish Federation of Central New Jersey, presented the Max L. Heine Humanitarian award to Robert Kuchner, managing partner of the CPA firm Rosenberg, Neuwirth, and Kuchner and leader of the Jewish Federation of Central New Jersey. The award was in memory of Berlin-born Max L. Heine, who fled Germany in 1933, flourished in New York and became known as the “Dean of Wall Street.” Heine supported many charities, including Blue Card, a not-for-profit that provides financial assistance to Holocaust survivors.

The $400,000 contributed by the gala’s 260 guests included funds raised by the Blue Card’s NYC Marathon team. Elie Rubinstein, executive director of The Blue Card, praised the organization’s 65 runners. Recalling his training for “the rigors of the 26.2 mile marathon,” Rubinstein cited a book he recently read: “A Life of Leadership: Eli Zborowski: From the Underground to Industry to Holocaust Remembrance” by Rochel and George Berman (Ktav Publishing House, Inc.)[. Rubinstein called Zborowski, founder of the American Society for Yad Vashem, an inspiration. “Zborowski’s description of how he survived the Holocaust by walking 14 miles in below-freezing weather from the Radomsko ghetto to Zarki sustained my determination to go the distance,” he said.

At a November 16 dinner at The Plaza, Yeshiva University’s Albert Einstein College of Medicine honored two of its own with a new Lifetime Leadership Award. Linda Altman, a past president of the college’s Women’s Division, and Arnold Penner, an executive board member of its Men’s Division, each received the award. “Those who give of themselves — volunteers — are invaluable to doctors and science,” Altman said. “More than $100 million has been raised by women for Albert Einstein College.”

Penner, a real estate developer and part-owner of P.J Clarke’s restaurants, said, “I thank my wife for giving her money away.” Then, looking down from the podium and into the crowd, he added, “There are my grandchildren. I am giving their money away too. Thank God for this success.”

“I’ve been writing these songs for 50 years,” said musician Neil Sedaka, who provided the evening’s entertainment. Accompanying himself at the piano, he sang “Breaking Up Is Hard To Do” and got the crowd of 360 to bounce in their seats and sing along. “The songs of the ’50s may seem naive by today’s standards, but my favorite is [still] ‘Solitaire.’” Sedaka said. “I started as a pianist at Juilliard and became a musical ambassador around the world. Between 1958 and 1963 I sold 40 million records. And then in 1963 a new group arrived — The Beatles!”

Sedaka described an encounter with Elvis Presley. “I told him I was from the Brill Building School of songwriting,” he said. Neither Presley nor some in the room for the “Celebrate Einstein” gala recognized that prestigious pedigree. The Brill Building was built in 1931 at Broadway and 49th Street. During the Depression, its struggling owners rented space to music publishers and it became famous for housing the studios where some of the most popular American songs were written.

The Doors Are Open to All at Rabin Medical Center