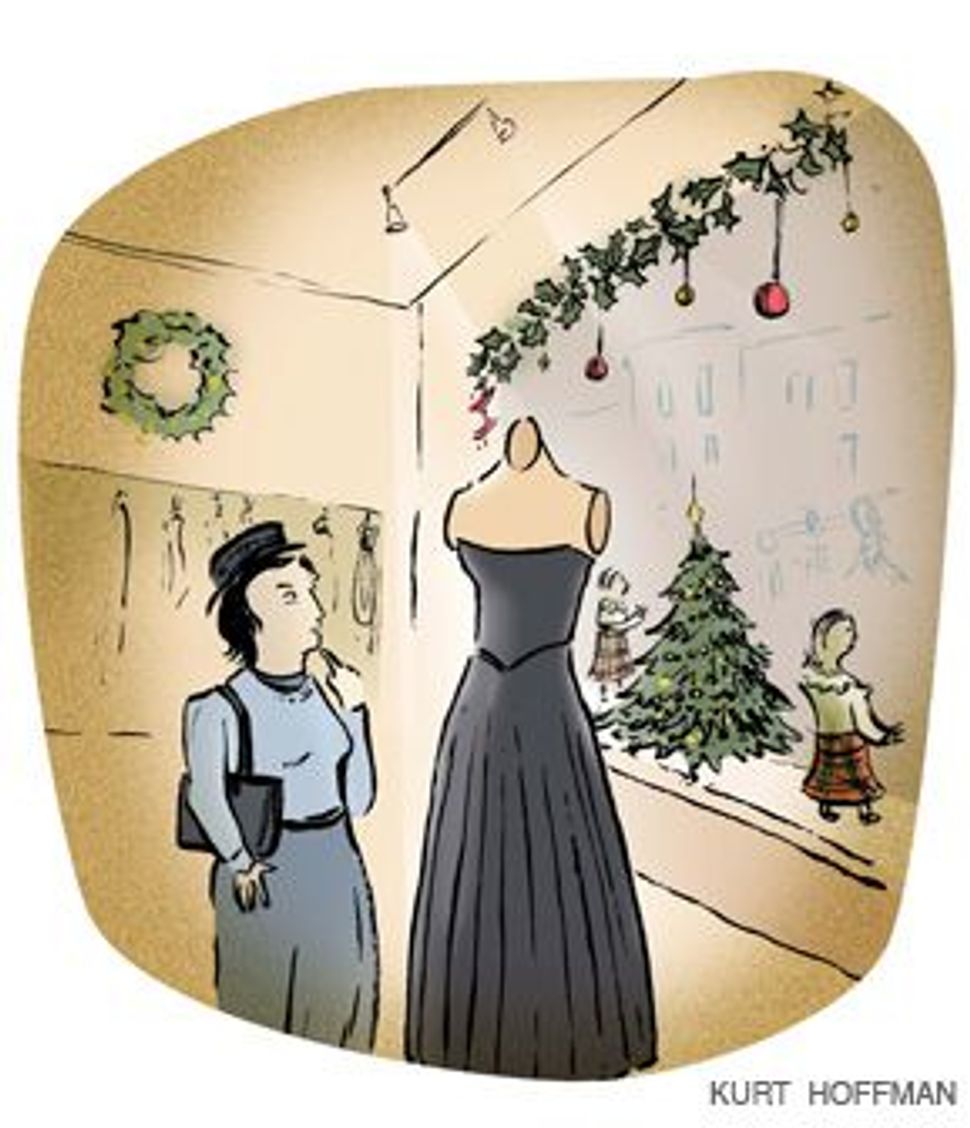 My first major purchase with money I had earned myself was a black-velvet gown from the Laura Ashley store in the retail court of the swanky Charles Hotel, in Cambridge, Mass. I bought the dress six weeks into my career as a Harvard University freshman and research assistant to a Kennedy School professor so that I could attend a black-tie event. As an Orthodox Jew who kept kosher and observed the prohibitions against mixed dancing, I knew all the Thanksgiving and winter formals would be pointless for me to attend. But I was convinced that my college experience would be woefully incomplete without the donning of velvet or satin, and so I jumped at the chance to attend a formal reception at the Fogg Art Museum to welcome some new piece, collection or personage to that august institution. 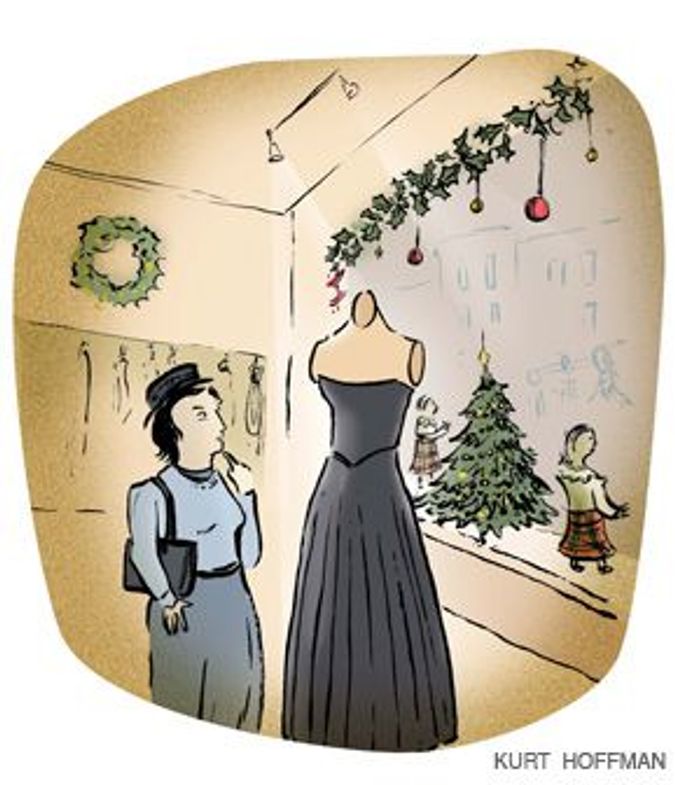 As my loose grasp of the reception’s purpose would suggest, the event turned out to be rather forgettable. Indeed, I enjoyed the decorous attentions of the senior who escorted me with good humor, as well as the cups of coffee we sipped in the lobby of an elegant hotel. But the real enchantment was in shopping for the dress. In the early days of November, Laura Ashley was already decked out for Christmas: Willowy mannequins draped in ruby-and-emerald velvet numbly caressed little girl mannequins frozen in plaid dresses with smocked bodices, gathered waists, satin sashes and velvet collars. The sky was steely, and business was slow. Perhaps lacking anything better to do, or perhaps succumbing to my excitement about the Grand Expenditure, the two saleswomen fawned over me. One was dressed like an elegant old librarian: well-made tartan skirt, cashmere cardigan, graying hair swept up in a loose bun. I was dying to talk about my mission, and she drew me out deliciously, helping me stitch my simple errand into an intricate fairytale sampler.

I soon realized, but did not mind, that I was playacting. I feigned a dizziness of regard for my date, and affected a level of interest in the Fogg I did not feel, as well as a desire for doting, maternal guidance I did not need. Far away from my mother and shopping alone, I didn’t need the saleswoman’s aesthetic counsel so much as I needed this woman to justify the splurge by mirroring my enthusiasm. Putting on a girlish volubility was also my way of reframing my unfamiliar and unsettling relation to an older woman who ought, by rights, to have been instructing — not serving — me.

Most of the dresses I tried on did not fit well or failed to meet my stiff modesty requirements. Laura Ashley clothes are cut for the tall, wispy women and mannequins who model them, whereas I descend from a long line of short-waisted Eastern European Jews. Yet the saleswoman and I had sealed some pact of indefatigability. Again and again, she proposed, and I disposed. She had a sale to make, and I had a fantasy to fulfill — a fantasy of elegance, leisure, belonging, the ineffable correctness that comes with dressing British even if you continue to think Yiddish. From the floral bed linens and upholstery fabrics, to the hunter-green ribbons in which one’s purchases were wrapped, to the unironic propriety of the clothes themselves, Laura Ashley retailed a fancy of neat English gentility that could trump the messiness of one’s true origins.

I think it was the saleswoman who finally had the brainstorm that made the sale: The long, sleeveless gown in inky velvet could be reconceived as a jumper and made unexceptionably modest by the addition of a ruffled blouse underneath. The look was vaguely Victorian; I loved the contrast between fluid black velvet and crisp white cotton. I could scarcely anticipate so early in my freshman year of college how many conflicts I would resolve over the coming years by deftly changing an assumption, re-conceiving a situation and watching the pieces fall into place.

Since purchasing that dress almost 15 years ago, I have worn it three times. Only twice more did I ever shop successfully at a Laura Ashley. The store in Cambridge closed midway through my undergraduate career. I stopped in a couple of times at the downtown Boston location on Newbury Street. Then the store moved, and I moved — both geographically and sartorially, away from Laura Ashley. Spending a summer on Manhattan’s Upper West Side a few years ago, I noticed red signs in the windows of the Columbus Avenue location, announcing the store’s imminent closing and total clearance. I stopped in one sultry day, my hopes lit afire as only a “clearance” sign can kindle them. The downstairs section, still full of home-decorating fabrics and children’s clothes, hummed with a frenzy of measuring and buying. Upstairs, where the women’s apparel was displayed, a young saleswoman lolled about, leaning idly against the banister in a tight, sleeveless sweater and jeans. The store was a shell of its crusty old self, with display furniture stacked dejectedly in a corner of the sales floor, and too-vast stocks of the few remaining styles.

Optimistically, I tried on a couple of beautiful dresses, but my size had long been sold out. “Maybe at another location,” I mused. I approached the saleswoman and asked if there was another store in Manhattan. “Nope,” she said, “this is the last one in the country. Boston and L.A. are gone. Laura Ashley is closing its retail operations in North America.” While I’d been busy with other things — graduate school, teaching, writing and wearing comfortable, easy clothes ordered over the Internet — the fantasy had crumbled. “That’s too bad,” I said, feeling a surprising twinge of loss. “I’ve gotten many things here I’ve really enjoyed.” It wasn’t mathematically true, I realized a minute later — but it felt like what I was supposed to say.

Miriam Udel-Lambert is an assistant professor of Yiddish language, literature and culture at Emory University. She is completing a collection of essays about Orthodoxy and feminism, to be published by Shambhala/Trumpeter.