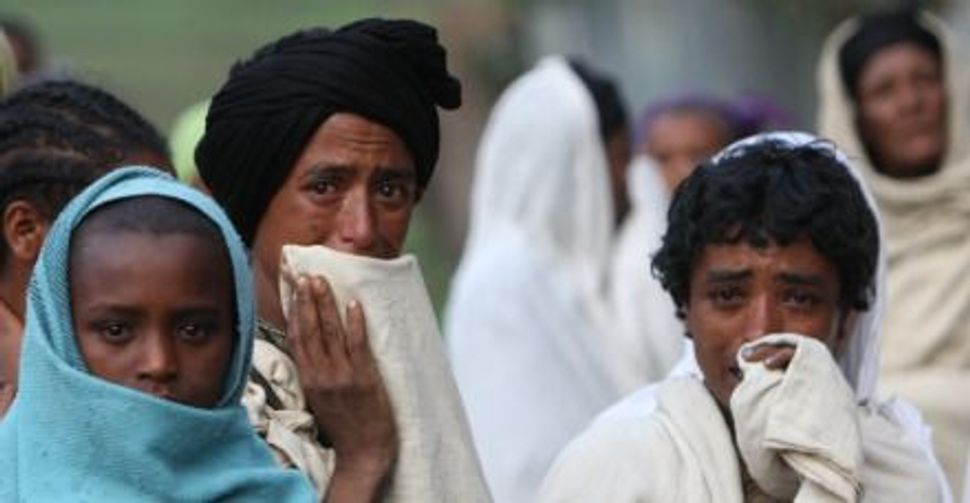 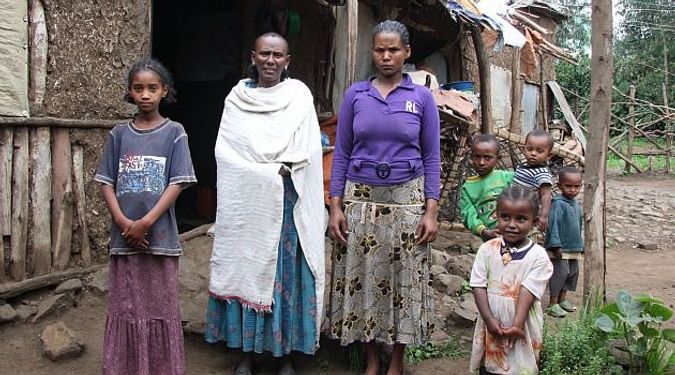 Longer Wait: Ethiopian Falash Mura Jews thought they were near the end of their long wait to immigrate to Israel. Now they have to wait much longer. Image by ILAN OSSENDRYVER

Backtracking on an earlier commitment, Israel will delay by at least one year completion of its admission of some 4,000 Ethiopian Jews already approved for entry, some of whom have been waiting since 1991 to immigrate there.

The government has instructed the Jewish Agency for Israel to reduce the flow of Ethiopian immigrants to only 110 per month, a 45% reduction from the rate of 200 per month that it promised in November 2010. At this rate, the completion of their aliyah, or emigration, will be postponed until March 2015, rather than March 2014, as had been planned. 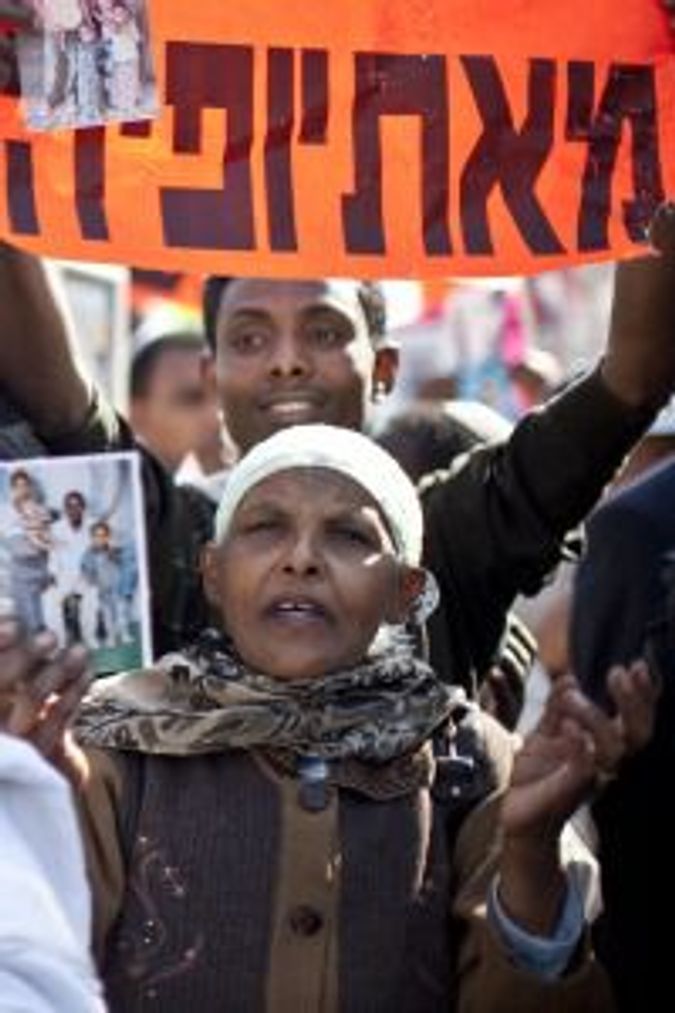 Bring Our People Here: Ethiopian immigrants in Israel demonstrate against the lengthy delays in allowing the remaining Falash Mura Jews to immigrate. Image by Atalia Katz

The Falash Mura are Ethiopians who have Jewish familial roots but lived as Christians for generations in order to escape persecution. But in recent decades, they asserted their Jewish ancestry and began to practice Judaism. The new Israeli decision will leave them waiting in the northwestern city of Gondar, where they live without running water or electricity, scraping by in their tin-roofed, dirt-floor huts and community outhouses.

The delay, the most recent in a history of postponements, prompted between 1,000 and 1,500 Ethiopian Israelis with family members in Gondar to protest outside Israel’s Ministry of Absorption on November 30, shouting the names of their relatives. They have petitioned the government to allow their relatives to immigrate and to join the estimated 130,000 Ethiopian Israelis already there, including more than 35,000 other Falash Mura.

Protest organizer Avraham Neguise and other representatives of the group were invited into the office of Absorption Minister Sofa Landver, who told them that the government’s 2010 commitment gave it the option of reducing the flow from Ethiopia if necessary. In the meeting, Landver provided no specific reasons for the change, alluding instead to a recommendation of an inter-ministerial committee.

Neguise was unmoved. “There is no evidence that the minister is requesting the budget for bringing them,” he told the Forward. “It is her responsibility to bring in immigrants who are eligible and approved.”

The reasons for the government’s altered game plan are elusive. Beyond that, the Jewish Agency and the Ministry of Absorption disagree about the availability of beds in the absorption centers where the incoming immigrants must live for a year or longer. At the same time, the Finance Ministry says the number of beds is not the real problem. And despite the new schedule the government has handed the Jewish Agency, which oversees the preparation of the Falash Mura in Ethiopia, the Prime Minister’s Office says there is nothing to worry about anyway: It will all get done on time.

The first volley in this familiar battle over their immigration began last June, when an inter-ministerial committee, empowered to re-evaluate last year’s Cabinet decision, recommended a cutback in the Ethiopian aliyah. The reason given was an insufficient number of empty rooms in the absorption centers.

But Yehuda Sharf, director of aliyah, absorption and special operations for the Jewish Agency, asserts that there are about 1,000 beds available and that another 500 beds will be free by January 2012. Josh Schwarcz, the Jewish Agency’s secretary general and liaison to the government, agreed that there is currently enough room. Despite the government directive, he says it is “too early” to predict that the aliyah will be delayed.

In September, Israel’s Public Council of Ethiopian Jewry, chaired by former Supreme Court president Meir Shamgar, filed a petition in the Supreme Court to force the government to stick to its commitment made one year ago. Co-petitioners include nine Ethiopian Israeli families who have been waiting for years for their relatives to arrive in Israel. Israeli citizen Wotetu Haim Alemu joined the lawsuit because his aunt and uncle died while enduring years of delays, even though they were already eligible to immigrate. The government, asked in October to respond to the petition, has yet to do so.

Joseph Feit, a longtime representative of the North American Conference on Ethiopian Jewry, which operated the Jewish compound in Gondar until it turned it over to the Jewish Agency recently, says that the 2010 Cabinet decision allows for reducing the aliyah “only if there is a vital need” to do so. “The government has not demonstrated a vital need,” Feit said, “or any need at all.”

In a statement to the Forward, Mark Regev, the prime minister’s spokesman, said, “We are constantly monitoring the pressures on the absorbing infrastructure and hope that an increase in the volume of immigration will soon be possible.” When asked who has been telling the government that the “absorbing infrastructure” is inadequate, Regev replied, “We rely on the assessments of the relevant agencies.” He did not specify to which agencies he was referring.

The Ministry of Finance, which funds resettlement of the Ethiopians, explained through its press liaison that infrastructure includes not just housing, but also education, health care, job training and social services. Some who have been involved in this issue — among them Micha Feldman, a former Israeli consul to Ethiopia still active as an Ethiopian immigration consultant to the Jewish Agency — say the total (lifetime) cost per immigrant is $100,000. Many have disputed this number, and the Finance Ministry declined to provide an estimate of a cost per immigrant.

“Israel is committed to pay for these immigrants eventually,” Feit said. “The more time they spend waiting in Ethiopia with inferior health care and education, not to mention hundreds of babies being born, the more expensive it gets.”

Neguise, who has been fighting for the immigration of the Falash Mura since 1991, says that financial arguments are moot. “What they are saying is an excuse,” he said. “It’s not the money. They don’t want to bring them.”

Landver strongly denies being opposed to their aliyah. “After a trip to Ethiopia, [the minister] encouraged the government’s decision of November 2010 in order to close the camps in Gondar and to bring the Falash Mura to Israel,” her representative said in a statement issued to the Forward. The Absorption Ministry supports the reduction, the statement added, “to provide for an overall better absorption process for the new immigrants.”

Meanwhile, daily life for the Jews in Ethiopia is lived on the razor-thin edge of poverty and deprivation. If they can find any work in Gondar, a city of 200,000, the jobs are temporary and pay little, even by Ethiopian standards. The Jewish cemetery, which sits on a remote hillside bordered by farms tilled by oxen pulling wooden plows, is studded with the gravestones of those who have died waiting on Israel’s Ethiopian doorstep.

The news of a delay has sparked concern among American Jewish leaders and activists, many of whom have a long-standing emotional and moral attachment to Ethiopian Jewry. The community also has an ongoing financial investment in sustaining the Falash Mura that may be affected by the announced delay.

The Jewish Federations of North America is raising $5.5 million to support the Falash Mura for the remainder of their stay in Gondar in a campaign called “Completing the Journey.” But the journey will get more costly if they don’t complete it on time. Jerry Silverman, president and CEO of JFNA, said, “We have the utmost confidence that the Jewish Agency is doing its best, in dialogue with the Israeli government, to ensure the original commitments are met.”

Activist supporters of the Falash Mura have less confidence. And the Falash Mura families who have waited for years for their family members to join them in Israel fear that the resistance to their relatives in Gondar is deep and prejudicial. “If you had 4,000 American, European or Russian Jews wanting to make aliyah,” Neguise asked, “can you imagine the government telling them to wait a few years because we don’t have enough housing?”