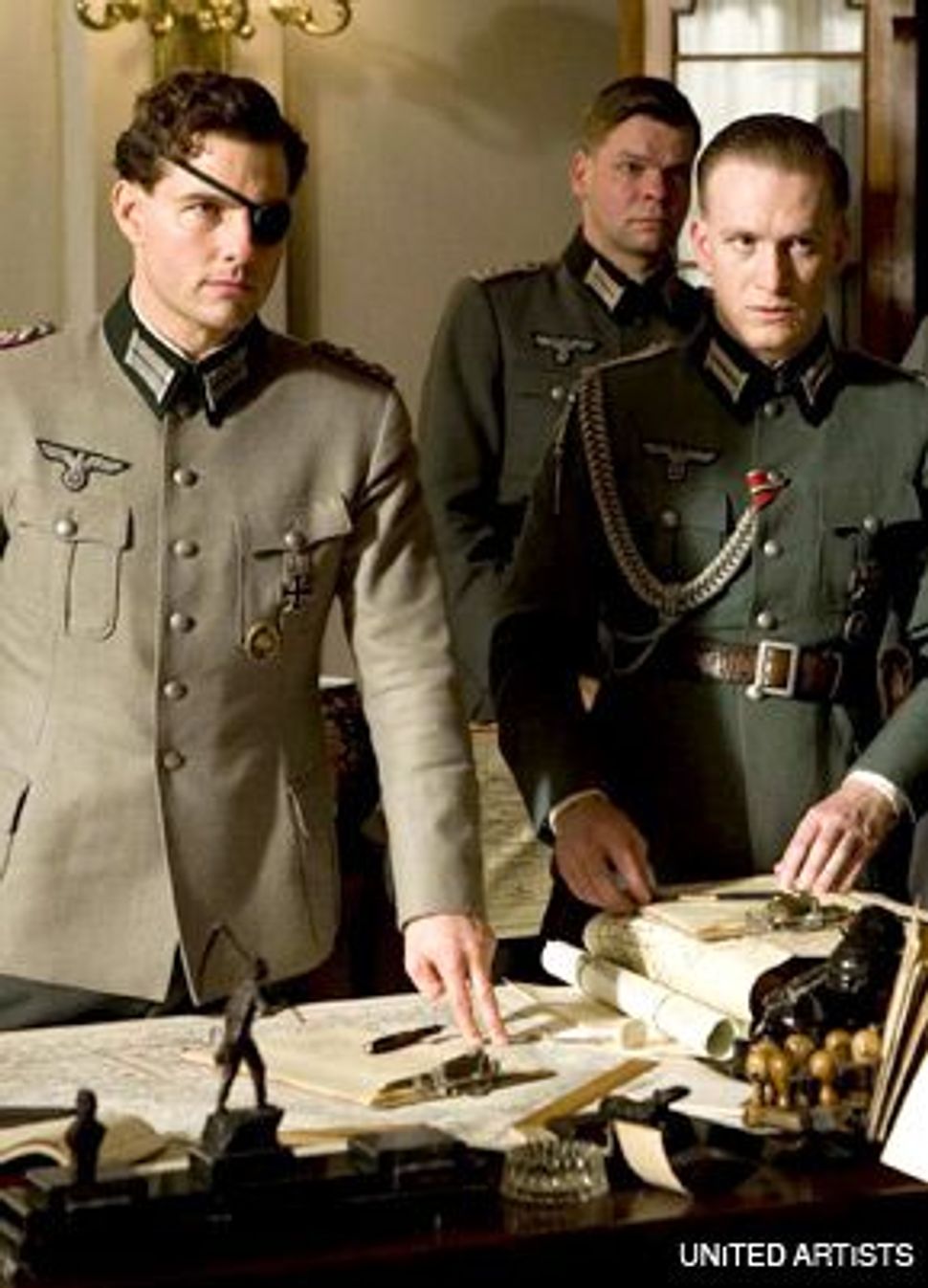 REBELS: Tom Cruise (left) leads other Nazi officers in a plot to kill Hitler in the film ?Valkyrie.? The descendants of one officer who got away are Jewish.

Los Angeles — “Valkyrie,” the new film starring Tom Cruise as real-life German army officer Claus von Stauffenberg, culminates with a phalanx of German soldiers storming the Berlin military headquarters where Stauffenberg and his co-conspirators holed up after they believed they had killed Hitler. In a dramatic climax, Stauffenberg and his fellow officers who plotted the July 20, 1944, attempt on Hitler’s life — which, as they quickly found out, had been botched — are dragged outside and executed by a firing squad. 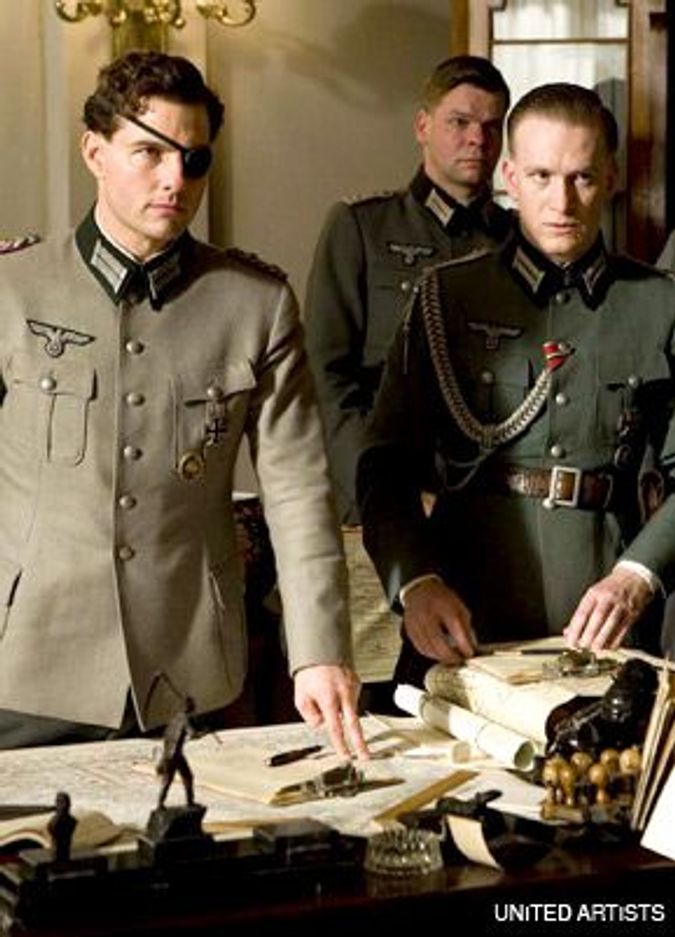 REBELS: Tom Cruise (left) leads other Nazi officers in a plot to kill Hitler in the film ?Valkyrie.? The descendants of one officer who got away are Jewish.

What the film — directed by Bryan Singer and opening nationwide December 25 — does not show is that at least one German officer connected to the failed plot escaped with his life when he ran down a secret back staircase. That officer, Ludwig von Hammerstein, was the son of one-time German army chief Kurt von Hammerstein, and he knew the layout of the building known as the Bendler Block because he had lived there as a child.

Today, the descendants of the Hammerstein clan are spread out across North America, but they are by no means typical descendants of German Nazi-era army officers: Ludwig von Hammerstein’s great-niece, Sara Paasche-Orlow, is not only Jewish, but also a Conservative rabbi.

Paasche-Orlow, the 41-year-old director of religious and chaplaincy services at the Boston-area’s Hebrew SeniorLife, inherited the complicated legacy of the Hammerstein family, as well as the family’s distinctly Germanic features. With dirty blond hair, blue eyes and milky white skin, Paasche-Orlow looks every bit Hitler’s ideal of the German woman. And yet she couldn’t be further from it.

A 1996 graduate of the Jewish Theological Seminary, Paasche-Orlow said in an interview with the Forward that her physical appearance is at times “challenging for the Jewish community.”

“I don’t feel particularly ‘other,’ but part of my reality as a rabbi is that a certain percentage of people assume that I converted,” said Paasche-Orlow, whose mother is Jewish. “My appearance and the genes I inherited from my non-Jewish grandmother have been a way to open up conversations about this history.”

The family history that Paasche-Orlow is referring to goes beyond the fact that her great-uncle Ludwig and his brother, Kunrat von Hammerstein, were part of the famed von Stauffenberg conspiracy highlighted in “Valkyrie.” All told, it is the story of an aristocratic German family that opposed the Nazis from the beginning. More broadly, it reflects some of the complex questions of loyalty, little known today, that riddled the upper echelons of Germany’s highly traditionalist officer corps when Hitler came to power.

Paasche-Orlow’s paternal grandmother, Maria von Hammerstein, though raised a Catholic, was an ardent Zionist. Born in 1909, Hammerstein grew up in the Jewish intellectual and political circles that emerged in Berlin during the prewar years. According to Paasche-Orlow’s father, Gottfried Paasche, a retired sociologist at Toronto’s York University, his mother gave up her university studies to learn agriculture so that she might go to Palestine and help build the Jewish state. She fulfilled her dream in 1934, when she moved to Palestine with her new husband, who had a Jewish grandfather, and worked briefly on the Givat Brenner kibbutz.

“She was drawn to these German Zionists, who for her represented the true Germany. She was rejecting the generation of her parents,” said Paasche, who speaks with a detectable German accent. “Her closest friends were Jews.”

Indeed, Maria von Hammerstein’s associations with Jews, along with her father’s known dislike for Hitler, made her suspect in the eyes of the Nazis. While in her 20s, Hammerstein helped her father, who served as chief of the German army from 1930 until 1934, save lives. Because of his position in the military, her father was privy to intelligence on who was wanted by the Gestapo; Maria would disseminate the information to those in danger, allowing them to escape Germany.

According to Omer Bartov, a professor of European history and German studies at Brown University, her involvement in Jewish life was unique for a woman of her time and social standing. “By and large, the German aristocracy was not philosemitic by a long shot,” Bartov said. “There was a much greater degree of sympathy for the Nazis than both German aristocrats and historians were willing to admit in the early postwar years. That included Stauffenberg himself, who was pro-Nazi; he started off supporting the party.”

While Stauffenberg was initially a Nazi Party supporter Paasche said that Kurt von Hammerstein never was. In fact, in 1939, when he was called back into military service on the Western Front, the general took the opportunity to make an attempt on Hitler’s life. The plan failed when Hitler — already suspicious of Hammerstein — didn’t show up when he was invited to inspect the troops.

The July 20 plot dramatized in “Valkyrie” was but one of at least 15 known attempts on Hitler’s life. The film takes its name from Operation Valkyrie, a Hitler-approved plan for the German Reserve Army in the case of a breakdown in law and order, which was then used by the Resistance to enact the July 20 plot.

When the von Stauffenberg conspiracy failed, both Ludwig and Kunrat von Hammerstein went into hiding until the end of the war. For his part of the conspiracy, Ludwig had been stationed in the Bendler Block to help arrest members of the military who remained loyal to Hitler after news of his death. Kunrat had served as a courier, keeping resistance members in contact with one another and recruiting members.

Following the Hammerstein brothers’ disappearance, the Nazis captured their mother and their two youngest siblings. They were held at the Buchenwald and Dachau concentration camps until they were freed in 1945.

Franz von Hammerstein was 24 when he was interned at Buchenwald along with his mother and younger sister. Now 87, Hammerstein is a retired Protestant pastor living in Berlin. In an interview with the Forward, he said that he considers himself both Christian and Jewish. “I go to synagogue, and I go to church,” he said.

After the war, Franz von Hammerstein helped found the Action Reconciliation Service for Peace, a Berlin-based group that initially sent German volunteers to help rebuild in countries affected by World War II. Today, ARSP has an office in Philadelphia and brings young Germans to America to work on social-justice projects and in the Jewish community.

Paasche-Orlow has carried on the family legacy with the group, bringing ARSP volunteers to Hebrew SeniorLife to work with the Jewish elderly.