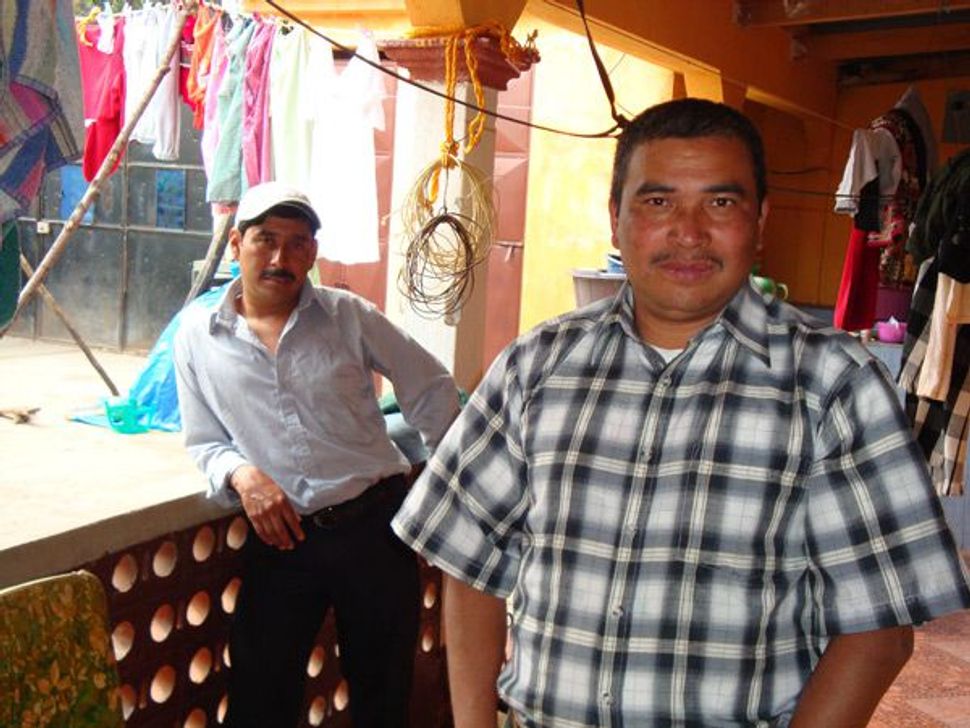 San José Calderas, Guatemala — While working 15-hour days, six days a week at a kosher meatpacking plant in Iowa where machines could chop off a finger at any moment, Marco Tulio relied on one thing to keep going: thoughts of his Guatemalan hometown of San José Calderas.

He pictured his wife and children moving into a new four-room home made of adobe, on a street where real houses of brick or cement were slowly but surely replacing the one-room shacks of sheet metal and bamboo. He pictured his son in school, with money to buy his uniform and all the books and supplies he needed. He took comfort knowing that if his aging parents got sick, they would have money to see a doctor.

He thought of all the new tienditas, or little stores, that had sprung up in town, selling cookies and sugar and dishes and toys, items that he and his fellow townspeople had never been able to afford.

But Tulio, 42, never imagined that when he returned home he would find, rather than the growing and prospering village he had left behind, half-built homes where construction had been halted, overstocked stores empty of shoppers, and children — including his 17-year-old son — roaming the streets because they had to quit school.

For more than a decade, Agriprocessors, thousands of miles north, in Postville, Iowa, acted as this dusty village’s guardian, patron and largest employer. But in the months since a May immigration raid and the arrest of Tulio and nearly 300 other undocumented Guatemalan workers, the kosher meat company is now proving to be the undoing of San José Calderas.

“This is what deportation has done,” said Tulio, who was deported October 12 with more than 100 other Agriprocessors workers, all handcuffed at the wrists and ankles for the plane ride to Guatemala City. “It’s a disaster for the village. It’s gone down since the raid. All the houses people were building have stopped, so there are these unfinished houses everywhere. How can you live like that?”

An estimated two-thirds of the 300 undocumented Agriprocessors workers deported to Guatemala in the past two months are from the municipality of San Andrés Itzapa, which includes Tulio’s village of San José Calderas. Officials say this town has become emblematic of the economic and social crises that the record-high deportations to Guatemala are provoking in this Central American nation of roughly 13 million people.

“There already is so much unemployment, and now the deportations generate more poverty,” said Marvin Avila, San Andrés Itzapa’s mayor.

According to Margarita Caté, president of the National Federation of Rural Women of Guatemala, there is a concern beyond families’ inability to eat, access

health care or better themselves: poverty breeds other problems, as people get involved in extortion or drug trafficking to make money. Statistics show that crime throughout Guatemala has surged this year, corresponding with the increased deportations and the stalled economy. Migrants say it’s only a matter of time before this village, too, suffers from an upswing in thefts.

“What we need is employment here, and not just for the 200 who were deported from Postville,” Caté said. “We need support from our government, and from organizations in the United States, so we can do something to help these people and stabilize their lives here.”

Home to mostly women and children since the men began migrating in the early 1990s, this rural village of about 3,000 people, an hour’s drive west of Guatemala City, has been called the “cradle of immigration.” Residents estimate half the working-age population has migrated to the United States — mostly to Iowa, and mostly illegally.

Guatemalans have come to rely on remittances, the money sent home by migrants working in the United States. Nationwide, those remittances represent 12% of the gross domestic product; in San José Calderas, they typically accounted for about 35% of the population’s income. That is why the immigration raid and the subsequent bankruptcy of Agriprocessors — once the largest kosher meat producer in the United States — have hit this village so dramatically.

“Before the raid, the village was progressing, developing economically,” Avila said. “Now, that has stopped. Before the raid, dollars were coming in, so if someone got sick, they could open their door, get in their own vehicle, drive to a clinic and pay for it. Now, they’ve sold their car, or if they haven’t, they can’t afford to buy gas.”

With no major industry in town, most villagers in San José Calderas are subsistence farmers, growing corn and frijoles planted in small mountainside plots of land — land that was often sold, along with houses that were mortgaged, to pay for a coyote, as those who smuggle humans across borders to the United States are called.

“They’re worse off now than before they left, because now they have debt,” Avila said.

Mardoqueo Valle, 37, who spent three years working illegally at the meatpacking plant, said he didn’t leave San José Calderas to get rich. He left, he said, because he saw no other way to better his life. Now, with so many returned migrants amid an economic slump, jobs are even scarcer than before he left.

The deported migrants say they’ve tried to find work. They’ve gone to the touristy colonial city Antigua, which is about 30 minutes away, to Chimaltenango and to other nearby towns, but without luck. Even if they wanted to work as farmers, earning only $5 a day in a country where eggs and milk are no cheaper than in the United States, they have no money to pay for the land, seeds or fertilizer.

“There’s so much inequality and discrimination in Guatemala,” Caté said. “Here, the opportunities don’t go to poor people, which is why they migrate to the United States. There, they do the same sort of work they might do here, working in the fields, but here that’s not enough for them to survive.”

Maria Elena Siquinajay, 32, doesn’t know how much longer she can care for her five children while her husband remains detained in Iowa. He’d been working at Agriprocessors about six months before he was captured in the raid. “I didn’t want him to go and leave me alone with the kids, but we knew that was the only way they could grow up and have a future,” Siquinajay said.

The $200 her husband sent home each month, combined with a little store she opened in the front of her house, had been enough to sustain the family.

“We had big dreams, of building a house or sending the children to school,” Siquinajay said. “Now I don’t know what’s going to happen to us.”

The deported workers say that as far as they know, none of the returned migrants has been able to find work. And while they all talk about how hard life is now, they don’t really talk to each other about their time in Iowa, the running and hiding and shouting during the immigration raid, or their time spent in jail.

“We don’t want to remember all of that suffering,” said Tulio, who noted that he passed through 11 prisons, the last in Louisiana, before being deported. “It’s the past, and we’re worried about the future now.”