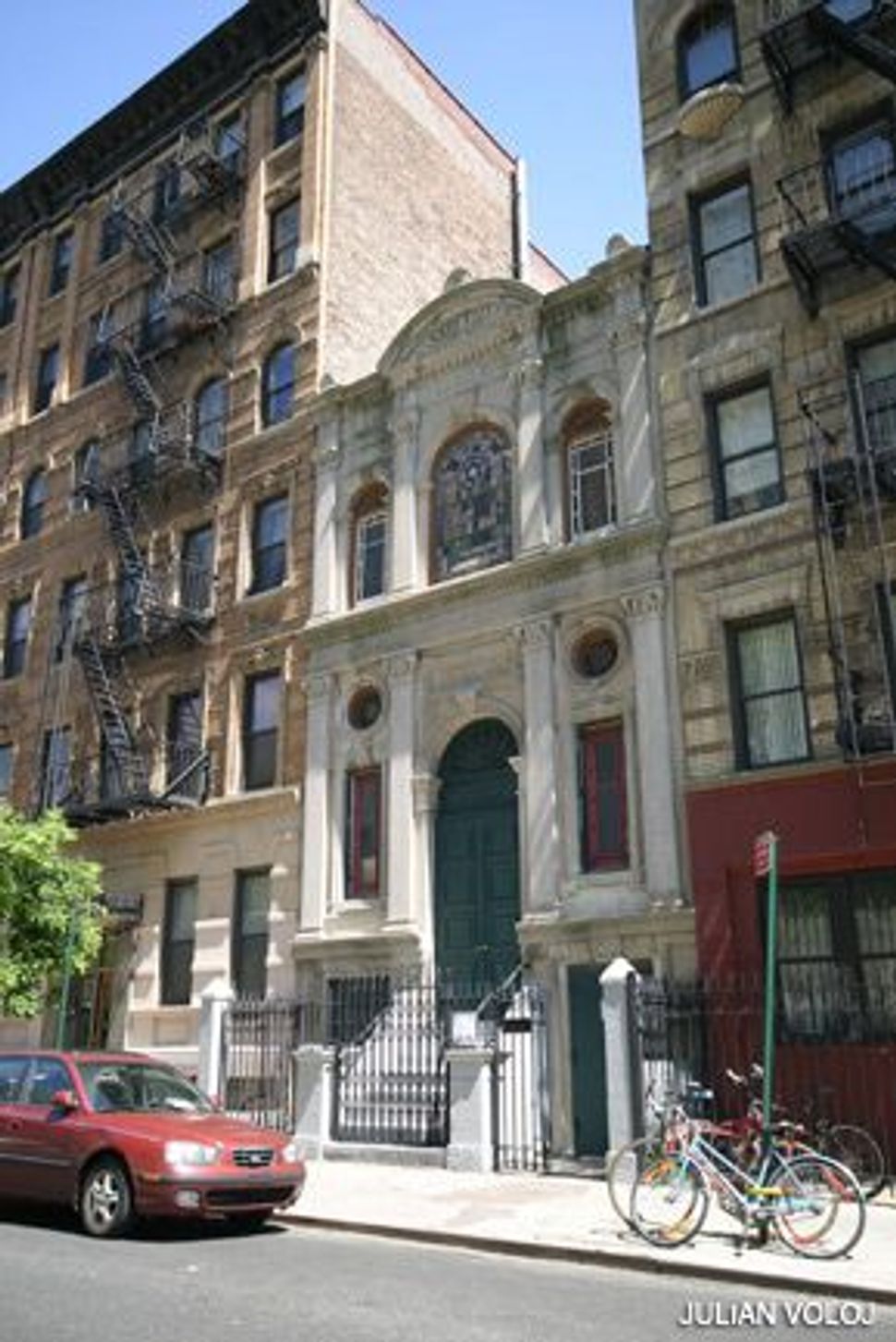 FLASHPOINT: The Anschei Mesiritz synagogue Delicatessen reports that offers from developers have dropped off since the economic downturn.

About a year ago, the owners of the Streit’s matzo factory, a pillar of Manhattan’s Lower East Side since 1925, announced that they planned to sell the building and move their operations to New Jersey. 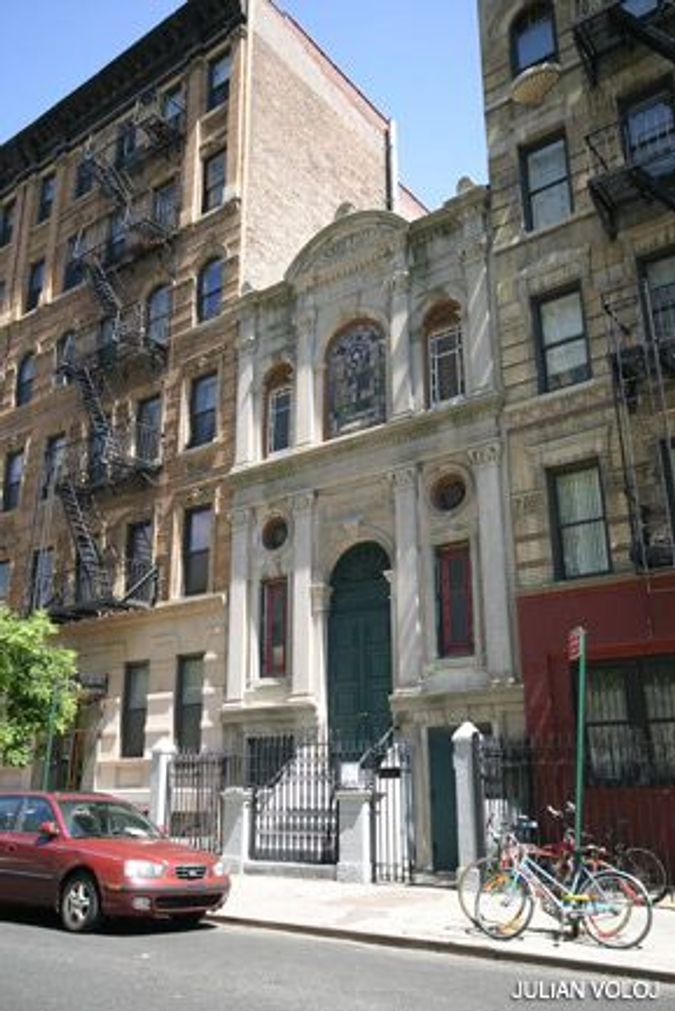 FLASHPOINT: The Anschei Mesiritz synagogue Delicatessen reports that offers from developers have dropped off since the economic downturn. 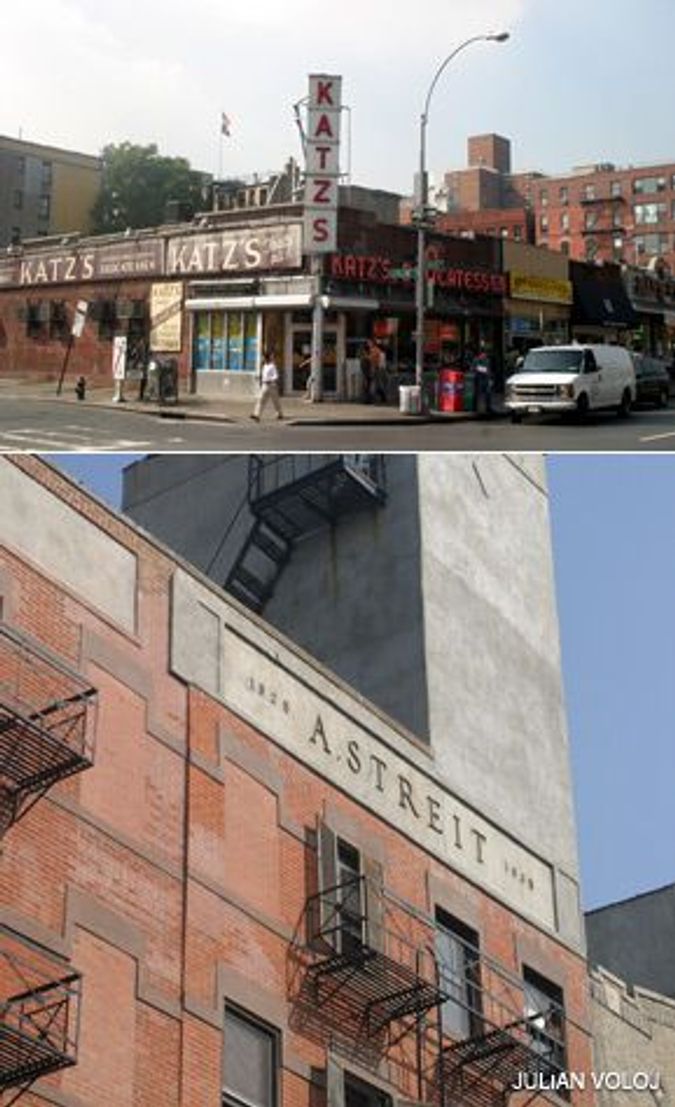 STILL STANDING standing: The Streit?s matzo factory (bottom) is staying put for the time being, while Katz?s Delicatessen reports that offers from developers have dropped off since the economic downturn.

The family-owned company was asking $25 million for the factory building, a price that seemed realistic given the neighborhood’s white-hot real estate market. Publications ranging from The Washington Post to The Jerusalem Post responded to the news with articles that read like obituaries for the Jewish Lower East Side. “Certainly, this is the end of an era,” proclaimed the local real estate blog Curbed. A Streit family cousin who is a documentary filmmaker set up a camera crew in a storage room at the factory and interviewed lifelong customers as a final salute.

Then came the economic meltdown, and all of a sudden Streit’s wasn’t going anywhere.

“Now is not the time to be taking on such ventures,” Aaron Gross, a Streit’s co-owner, told the Forward. “We’re in the process of going off the market.”

For at least the past decade and a half, preservationists, longtime residents and leaders of the ethnic communities of the Lower East Side — the cradle of American Jewry — have bemoaned the neighborhood’s dramatic gentrification. Boutiques and bars displaced wholesale merchants and bargain clothing stores. Streets dominated until recently by tenements that housed wave after wave of immigrants became construction zones. New high-rise hotels and condos soared above traditionally low-rise streetscapes. The National Trust for Historic Preservation placed the Lower East Side on its 2008 list of America’s 11 most endangered historic places.

Now, however, the economic downturn has frozen much of the development. What remains of the neighborhood’s old-time character may temporarily be frozen in place as well.

“I’m sure any property bigger than 20 square feet on the hot Lower East Side was approached a million times by developers until six months ago,” said Joel Kaplan, head of the United Jewish Council of the East Side. “Now people probably figure they can wait for [the market] to turn.”

All this has preservationists hoping for a break from the frenzied development that has engulfed the neighborhood. Meanwhile, preservationists and community activists won a significant victory when the New York City Council voted in November to rezone much of the neighborhood, limiting heights for new buildings and requiring developers to include affordable housing in their projects. A separate push to create a city-designated historic preservation district on the Lower East Side remains a work in progress.

Preservationists are fighting for the future of a neighborhood that has played an unparalleled role in American Jewry’s past. It was a first stop for the masses of Jews who arrived on these shores fleeing the pogroms and poverty of Eastern Europe in the late-19th and early-20th centuries. According to the Lower East Side Tenement Museum, more than 320,000 Jews called the Lower East Side home by 1915.

The Jewish map of today’s Lower East Side is really composed of two different landscapes, divided roughly by Delancey Street. South of Delancey, there remains a substantial, and heavily Orthodox, Jewish community clustered in a long row of co-operative apartment towers that line Grand Street. This area has been less affected by recent development, but it too has undergone stark changes: The co-ops — built by unions as affordable, working-class housing — have been privatized and prices for apartments have soared. Many of the long-established Jewish residents have moved out (or passed on), and young professionals — many of them modern Orthodox — have moved in. According to experts, the co-ops remain 50% to 70% Jewish.

The area north of Delancey Street, which has gentrified more rapidly, no longer has a cohesive Jewish community but includes such historic spots and tourist attractions as Streit’s, Katz’s Delicatessen, smoked fish emporium Russ & Daughters, the Orchard Street Bargain District and a number of century-old synagogues.

But a building’s fame has not been a deterrent to developers seeking prime real estate on which to build.

In 2007, Alan Dell, a co-owner of Katz’s, which was founded in 1888, denied rumors that he was selling his restaurant’s building. He did, however, tell a local newspaper that he would consider allowing a developer to build above his historic restaurant for “like a stupid number — like $50 million.” Offers from developers, however, seem to have waned along with the economy. “There have definitely been fewer offers in the past six months,” Kenny Kohn, executive chef at Katz’s, told the Forward.

Nor have sacred spaces been spared developers’ attention.

Tensions flared this summer over the fate of the Anshei Meseritz synagogue, a neo-classical-style building on East 6th Street that dates from 1910 and has a tiny, aging congregation. Synagogue officials had made a deal with a major developer, Kushner Companies, which planned to replace the building with a condo complex, saving some room on the ground floor for a new Meseritz sanctuary. The plan drew vigorous objections from some congregants, preservation groups and the local city councilwoman. After a protest held outside the synagogue in August drew dozens of demonstrators, Kushner Companies backed out.

While community organizations — both Jewish and secular — took credit for the Kushner deal’s demise, activists now express hope that the downturn will prevent similar development deals in the future.

“I think it takes the pressure off the sacred sites to sell or do anything like that,” said United Jewish Council’s Kaplan, whose group has been involved in efforts to preserve Meseritz and other historic synagogues.

Preservationists and community activists are not exactly jumping for joy over the recent turn of events, though. Many say that the neighborhood is still vulnerable to over-development in the long run.

“People are worried and uncertain about what’s going to happen,” said Amy Stein Milford, deputy director of the Museum at Eldridge Street, an educational organization housed in a restored synagogue. “I still think we’re in danger of losing our Jewish history and other immigrant neighborhood history as well.”

And though a pause in development and a slowdown in soaring prices may allow the neighborhood to catch its breath, the ruins of the Young Israel synagogue on East Broadway, south of the co-ops, serve as a reminder of how ugly things can get when gentrification stops midstream. Young Israel sold its property to a developer and, last June, moved its congregation to temporary quarters at a nursing home across the street. As in the Meseritz plan, the building was slated to be replaced with condos, and Young Israel would get a new sanctuary along with classrooms and a gym.

The congregation was scheduled to move into its new space this November. Instead, its old building remains stuck in a state of half-demolished limbo, with new condos nowhere in sight.

Young Israel’s rabbi for the past 44 years, Yeshaya Siff, said that the developer has not been able to tell him when construction will start up again. For now, the congregation is splitting its time between a chapel at the nursing home and the East Side Torah Center, another neighborhood synagogue.