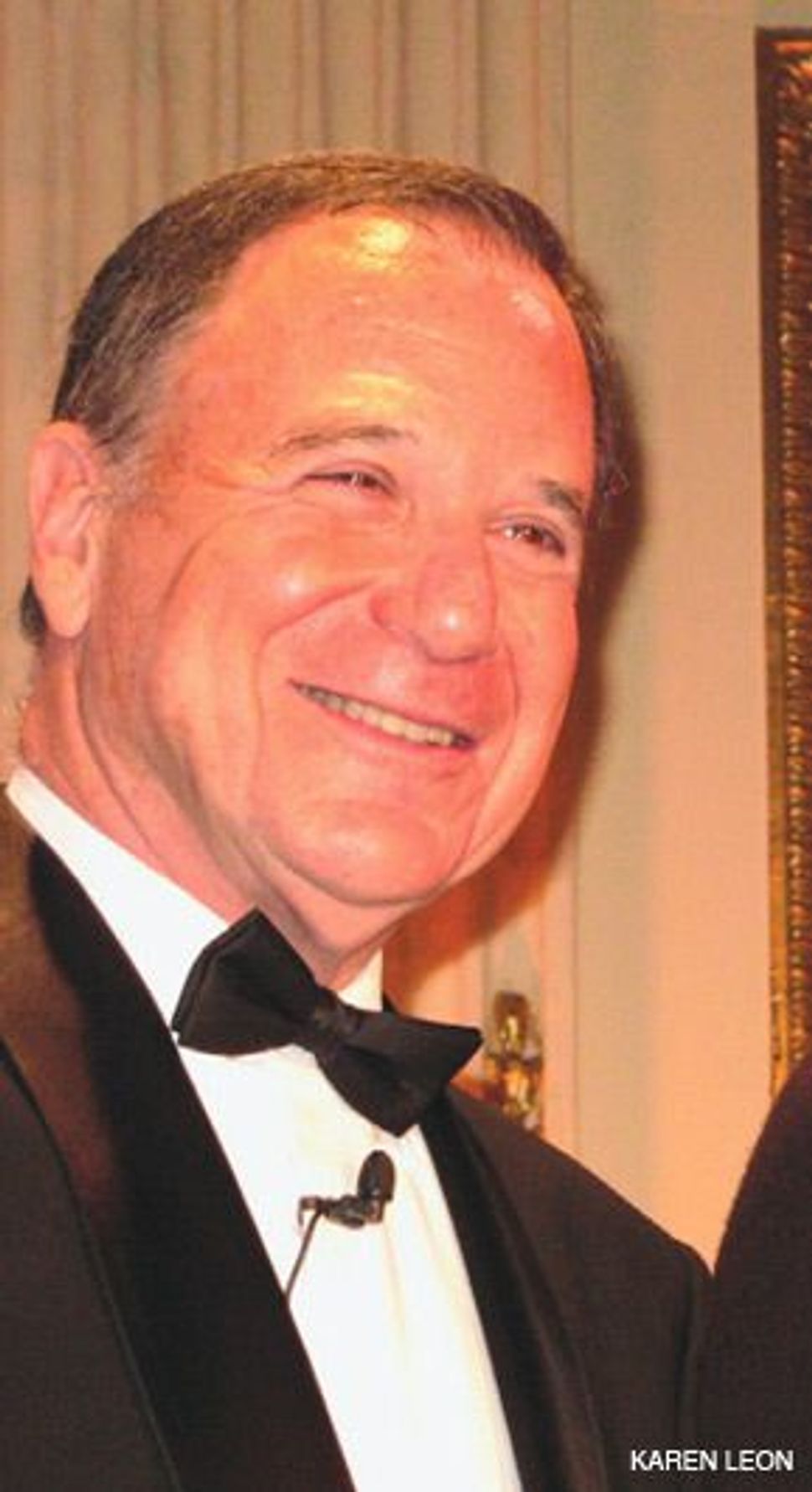 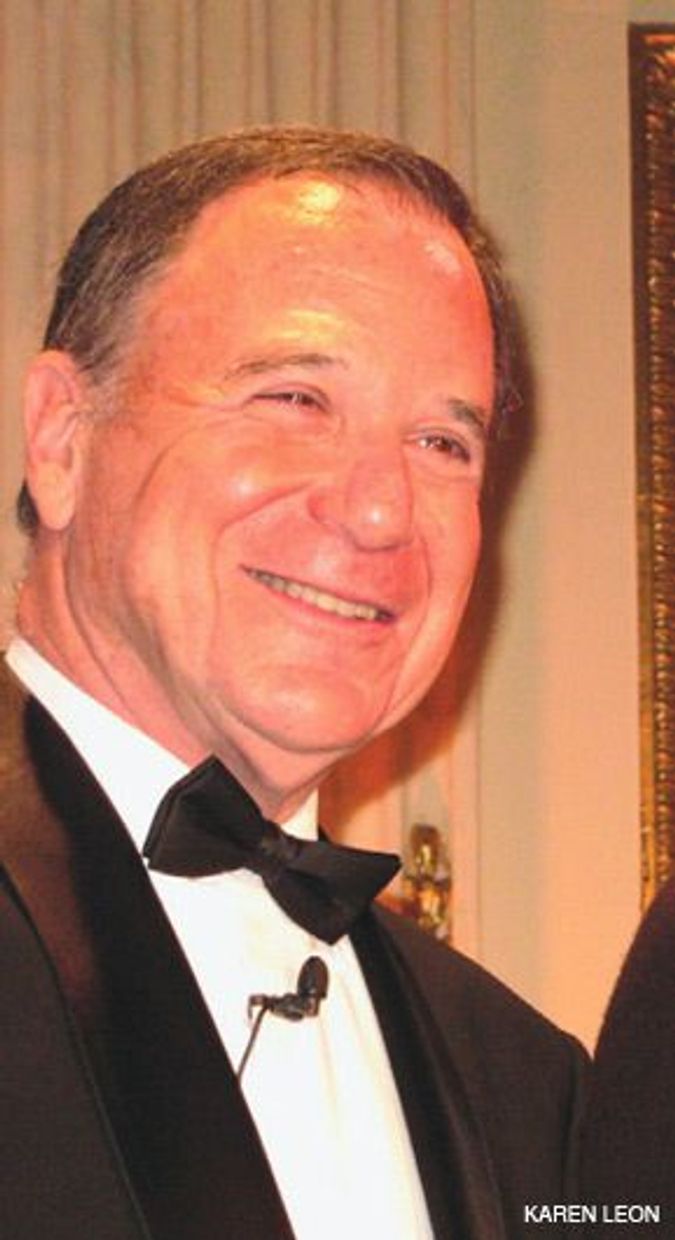 Between sobering reality checks, Dan Gillerman’s wry sense of humor delighted the crowd at the December 1 America-Israel Friendship League Partners for Democracy Award Dinner, held at the Plaza Hotel. Gillerman, who is Israel’s former permanent representative to the United Nations and a dinner honoree, gently challenged moderator Charlie Rose’s statement about Israel’s upcoming election as being “at the time of the ascendancy of Obama to the U.S. presidency.” Said Gillerman: “The U.S. is about to inaugurate its 44th president in 230 years. Israel is about to elect its 32nd prime minister in 60 years.” Said Rose: “It’s a runoff between Barak vs. Livni vs. Netanyahu… polls indicate that the Likud party has it over the others.” Smiling diplomatically, Gillerman said: “Polls indicate that it may be Netanyahu. I think it was Shimon Peres, who knows more about polls than anyone else, who said — and Ronald Lauder, who is here tonight will appreciate this — ‘Polls are like perfume: nice to smell, but dangerous to swallow.’” Here’s Gillerman’s final take on the election: “As happened in [the United States], it will not be about security or war and peace, but about the economy. Although Israel is in a better situation than most other countries, it’s suffering from the effects of the global financial meltdown.”

Expressing concern about Israel’s “existential danger” and the “eerie silence of the Muslim world,” Gillerman stated, “This is not a clash of civilizations, but of a civilization, the majority of whose victims are Muslim.” He added: “When Christians kill Muslims, it’s a crusade; when Jews kills Muslims, it’s a massacre; when Muslims kill Muslims, it’s The Weather Channel.” Elizabeth (Lally) Graham Weymouth, who is Newsweek’s senior editor and special diplomatic correspondent and the recipient of the Partners for Democracy award, said: “I heard that an Israel strike against Iran is off the table. Has the mood changed?” Gillerman responded: “I don’t think it will ever be off the table. I don’t think [Mahmoud] Ahmadinejad is crazy enough to launch a nuclear warhead against Israel… but Iran will have no compunctions about ever making [nuclear] weapons and dirty bombs available to rogue regimes and terrorist groups. And all we need is for Hezbollah, Hamas and Al Qaeda to attain it. As far as Israel is concerned, [Israel] is committed to make sure that Iran will never attain nuclear capability. Israel has always made it very clear that Iran is not just a local threat, but a global threat. The real danger is not in Jerusalem or Ramallah, it is in Teheran.”

“I don’t see how we are going to stop Iran. Who is going to do it? How can Israel do it?” asked another partners for Democracy award honoree, Mortimer Zuckerman, chairman of Boston Properties, editor and publisher of U.S. News & World Report and co-publisher of the New York Daily News. “It’s very scary,” Zuckerman said. The fact of threat will impact on Israel… investments, people willing to live in Israel.” Gillerman reassured, “I don’t think Ahmadinejad is crazy enough, despite his rhetoric ranting, lunatic denial [of the Holocaust] while preparing the next one.”

LATKES, TEARS AND THE HOLOCAUST — A HANUKKAH REMEMBRANCE

After fleeing German-occupied Warsaw, my mother and I made it to her birth shtetl, Byten (now in Belarus), on December 7, 1939 — the first night of Hanukkah. Defrosting under a goose-down perene (comforter), I watched my mother and her sister Taybe bake potato latkes on the kind of stove that inspired the song, “Oyfn Pripetshik.” Taybe covered a platter of sugarcoated latkes with a towel and then put it out on the snow-covered porch. My mother raced outside and brought back the latkes. “These are for Zlatke di meshugeneh,” Taybe said, referring to one of the town’s feebleminded souls, whom everyone took turns feeding. My mother defended herself: “We were starving in Warsaw. There may be no food tomorrow!” Taybe calmed her: “Zelde, no one is going to go hungry here. We have a cellar full of potatoes.” Because of atrocities we’d witnessed and our near-death escapes, my mother, who had not shed a tear since the day the bombs fell on Warsaw — not even when she and I were lined up to be shot by a Nazi firing squad — began to sob. “I never thought I would be able to cry again, be human again,” she explained to Taybe. My mother continued to make latkes for Zlatke every day, until we left Byten en route to Vilna a week later.

On July 25, 1942, in the first of three “actions” by the Einsatzgrupen (German mobile execution squads), Taybe and her husband and two daughters, along with my parents’ extended family — brothers, sisters, their husbands and wives, elderly parents and my 45 first cousins — as well as the Jewish community of Byten were shot, one by one, at the edge of a pit, into which some 2,200 souls were dumped. My father’s mother, Tzipe, her daughters and sons-in-law and their children fled into the Belorussian forests to live and die fighting alongside the Jewish partisans, a scenario similar to that of the Bielski brothers as portrayed in Edwin Zwick’s upcoming thrilling film “Defiance,” based on Nechama Tec’s book of the same name. The film stars Daniel Craig as Tuvia Bielski.

A postscript: September 22, 1942. My grandmother Tzipe, then in her 70s, was in the forest bunker, cooking for the partisans. Two of her grandsons — my cousins — were lookouts. Suddenly, an alarm! Germans were approaching the bunker with flamethrowers. Tzipe, aware that she would be charred and unidentifiable, grabbed a photograph and crumpled it in her hand. After the war that took place from 1945 to 1946, when my father came through Byten after his four-year long sojourn in Stalin’s gulags in Siberia and prison in Uzbekistan, a peasant who had been his childhood friend gave him a crumpled up photograph he had rescued from Tzipe’s hand before she was buried. It is the only photo I have of myself as a 4-year-old playing with a large hoop in Warsaw’s Lazienki Park. In “Pinkas Byten: The Rise and Destruction of a Jewish Community,” by Mordechai Bernstein (Bytener Society, Buenos Aires, 1954) my father chronicles the 400-year history of the Jewish community the shtetl where he, like my mother, was born. One of Byten’s stellar “stars” was my parents’ childhood friend, Tzivia Lubetkin, who was one the leaders of the Warsaw Ghetto uprising.

REMEMBERING THE VICTIMS, HONORING THE RESCUERS, AT YAD VASHEM DINNER

“I was born in a one-horse town in Texas, and not too many more Jews,” Fred Zeidman, chairman of the United States Holocaust Memorial Museum, told the guests, Holocaust survivors and their children and grandchildren, and a dais-full of diplomats at the November 9 American & International Societies of Yad Vashem Tribute dinner, held at the New York Hilton. Zeidman, recipient of the Yad Vashem Leadership Remembrance Award, stressed: “We must embrace each other out of respect and out of necessity, because, in the end, we have no other choice… Jewish experience teaches us to draw strength from each other, to kibitz and kvetch about our differences and, eventually, to set them aside for common purpose.” Zeidman praised Eli Zborowski, founder and chairman of the Yad Vashem Societies, “without whom, this and all events leading to this evening would not be possible.”

The evening also honored Holocaust survivor Selma Gruder Horowitz with Yad Vashem’s Remembrance Award. Horowitz, president of East Coast Industrial Uniform, Inc., recalled her escape from the Kotowice concentration camp after it was liquidated in 1943. She remembered hiding in the forests of Hanaczow with her family, the burning of her village by Poles and Ukrainians and, finally, survival, thanks to a Polish woman, Maria Paczowska, who hid her and her three siblings, along with their mother. In August 2003, Yad Vashem dedicated Paczowska posthumously one of the Righteous Among the Nations. The evening’s guest speaker was Margaret Spellings, United States secretary of education. In Zeidman’s introductory comments, he noted, “Margaret Spellings and I got to know each other in the early 1990s, when she and I worked together to save a historically black university in Houston.”