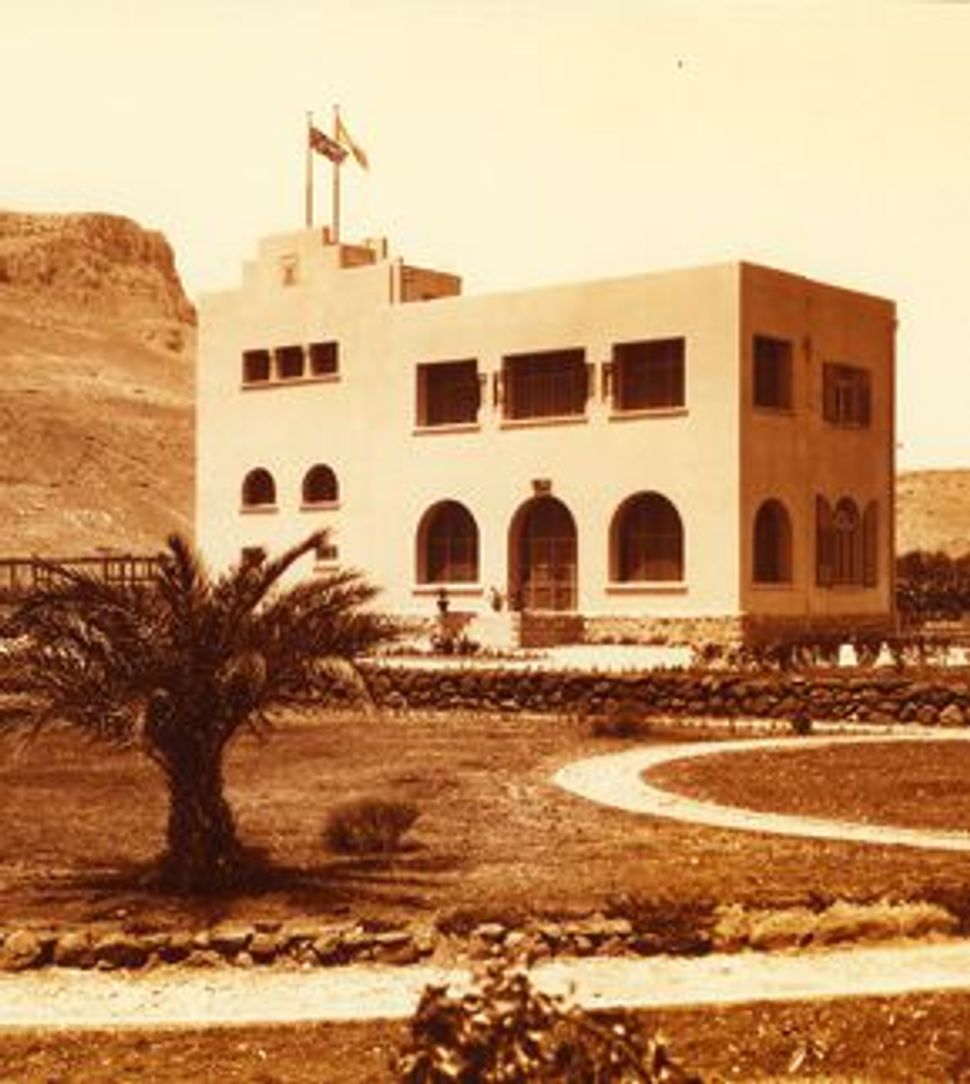 TREES AND SHOWERS: An early photo of Villa Melchett, above, and a recent image, below.

As the waters of the Sea of Galilee lapped at the foot of the back garden, I rocked gently in a hammock and pondered the possibilities. Should I stroll down to the beach, where the children played in the sand? Feed the carp in the fishpond, or curl up with a book in the Bedouin-style tent on the lawn? Head to the kitchen for a snack of cheeses from a local boutique dairy, along with a freshly ground cappuccino? Or merely roll over in my hammock, mesmerized by the peace and privacy of Villa Melchett, a luxurious estate with a history. 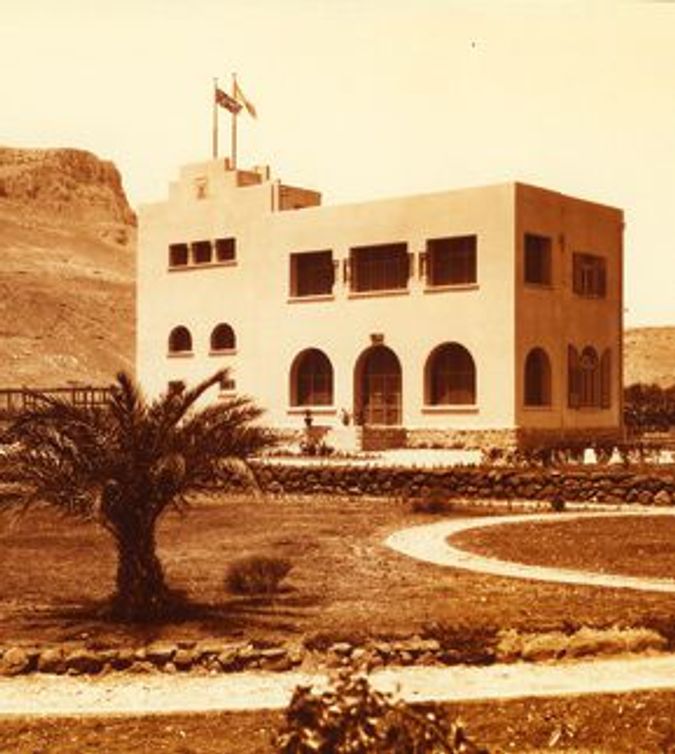 TREES AND SHOWERS: An early photo of Villa Melchett, above, and a recent image, below. 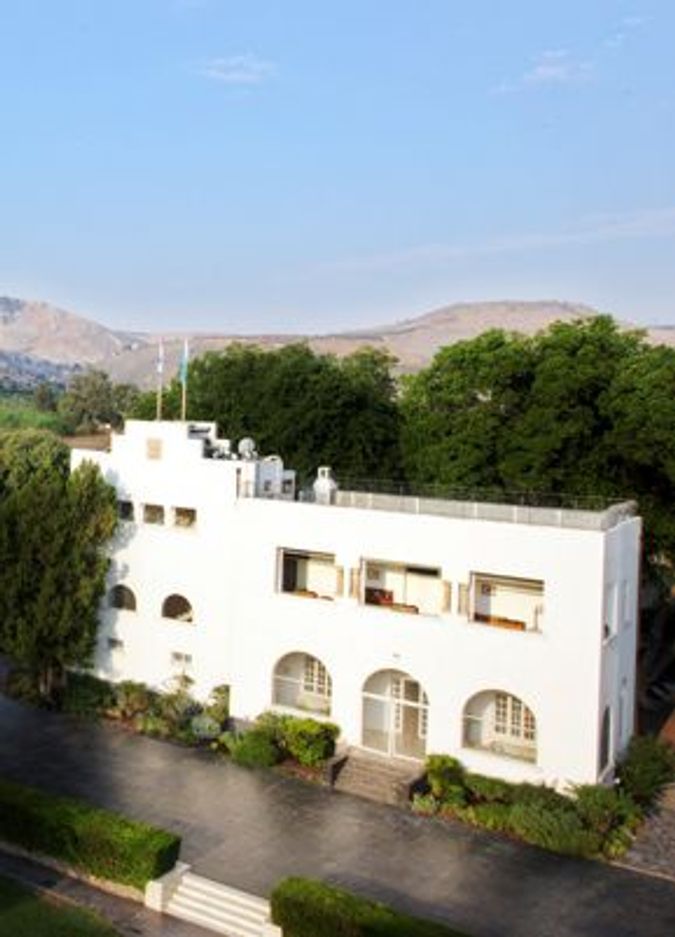 To celebrate a special occasion, our extended family of 13, including two babies, had searched for a place to holiday that was different from the usual hotel or “zimmer” (bed and breakfast) in Israel. A historic, stately home like Villa Melchett, where the staff stocked the refrigerator, prepared the beds and then left us entirely alone for two days, seemed a good option.

Villa Melchett, about three miles north of Tiberias, was built in the 1920s by British industrialist, financier and politician Alfred Moritz Mond, the first Baron Melchett (1868–1930). Although he wasn’t brought up as a Jew, and raised his children as Christians, he became an ardent Zionist following the Balfour Declaration in 1917. His son, Henry, and daughter, Eva Violet Isaacs, Marchioness of Reading, converted to Judaism, and both became devoted Zionists, as well. Melchett died before the villa was complete, but Eva spent her holidays there, where a number of notable figures, including David Ben-Gurion, Orde Wingate, Chaim Arlo Soroff and Chaim Weizmann, also enjoyed its charms.

After the 1940s, said Michal Zandani, director of Villa Melchett, “the villa passed from hand to hand until its purchase by wealthy industrialist Shoul Eisenberg, as a long-term investment in 1977.” In 2006, Eisenberg’s daughter Edith, an artist, and her son, Daniel, decided to refurbish the villa, preserving its original character while adding such modern luxuries such as a television and power showers.

Back at the villa, we had planned to spend one of our three days there touring the area and dining out, but in the end, we didn’t leave the premises at all. The children fed the fish and swam in the Kinneret; the adults barbecued, played boules and hung out. The villa offered ample nooks and crannies for those who wanted privacy. At the end of the holiday, when the cars pulled away, 3-year-old Rotem burst into tears. That seemed to say it all.

For travelers seeking accommodations with history as they plan their 2009 vacations, Villa Melchett (www.villamelchett.com) is far from the only option in Israel. In addition to the celebrated King David and American Colony hotels in Jerusalem, there are many lesser-known venues, ranging from convents to luxurious hotels.

The Scots Hotel in Tiberias (www.scotshotels.co.il) is a former pilgrims’ hospice and was the home of the first modern hospital in the area, established in 1894 by David Watt Torrance, a young Scottish doctor who made it his mission to improve the health of the people of the Holy Land. Now a boutique hotel with 67 guest rooms, including the former residence of the doctor, it has been refurbished to modern luxury standards while retaining its original character. The Church of Scotland still owns the building.

One of Israel’s most tranquil spas is the Mitzpe Hayamim Hotel (www.mizpe-hayamim.com), high up on Mount Canaan, near Rosh Pina and Safed. It was established in the 1950s according to strict health standards by the German doctor Yacov Yarus, whose dictates — vegetarian and fish dishes; only organic, homegrown fruits and vegetables, and locally made cheeses and wines — are still in evidence today. The hotel is located on acres of woodland, gardens and walking paths, and has its own organic dairy farm.

Of great architectural significance (not to mention a terrific location) is the landmark Jerusalem International YMCA (www.jerusalemymca.org), which was designed in 1925 by Arthur Loomis Harmon, a partner in the same architectural firm that designed New York’s Empire State Building. The imposing YMCA building, with its 152-foot tower, combines symbolic references to Judaism, Christianity and Islam, and features myriad arches, domes and columns, as well as carved stone and painted wood panels. It houses a hotel, the 3 Arches. There is a branch in the Galilee — the historic 13-room Peniel by Galilee guest house (www.ymca-galilee.co.il), built for Archibald Harte, the general secretary of the Jerusalem YMCA in 1920.

Palacio Domain’s (www.palaciodomain.com) claim to age is that it is built on the ruins of a 14th-century Mameluke era governor’s mansion in Safed, and it makes the most of this connection with stone arches, high ceilings, grand furnishings and panoramic views of Safed. For those who prefer modern luxuries, there is also a spa in this boutique hotel.

A number of historic convents and monasteries offer accommodations, and while you won’t get hot tubs (and sometimes, not even private bathrooms), you will find quiet and modestly priced rooms. The Sisters of Sion Convent guest house (www.sion-ein-karem.org) is located in the beautiful Jerusalem suburb of Ein Kerem and is known for its tranquil gardens. Originally an orphanage, it was built by Alphonse Ratisbonne in 1863.

Carol Novis has lived in Israel for more than 30 years. She worked as a writer and editor for The Jerusalem Post and Haaretz, and now teaches editing at Beit Berl College.