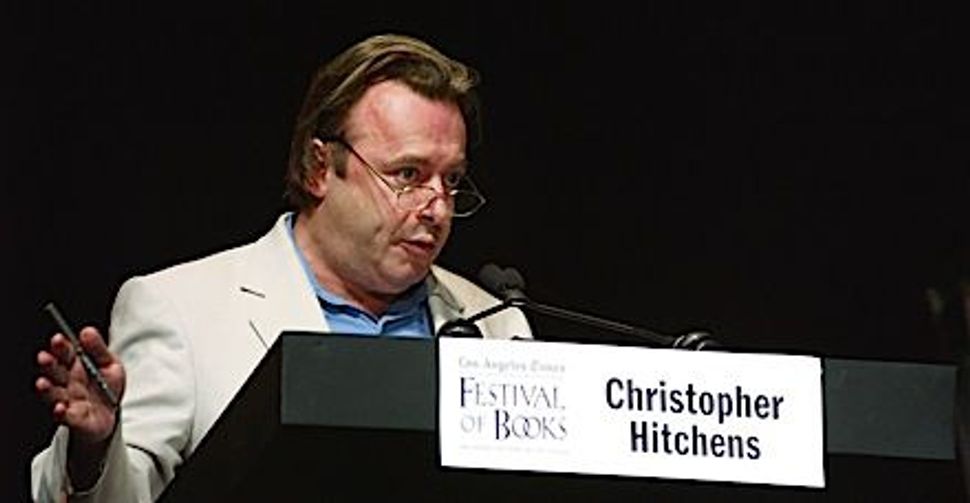 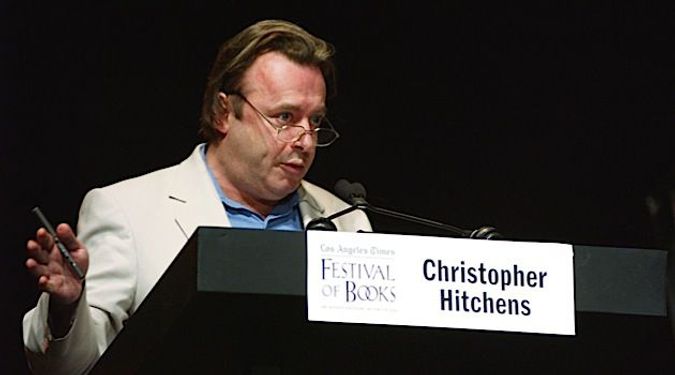 ?Jew-ish?: When he traveled Christopher Hitchens made a point of visiting local synagogues in communities that had little or no Jewish community left. Image by Getty Images

In 1987, when Christopher Hitchens discovered at age 38 that he was Jewish, he was, as he later wrote “pleased to find that I was pleased.” The discovery moved the atheist to contact the only rabbi he knew personally to explore what he might be missing. His meetings with Rabbi Robert Goldburg didn’t shake Hitchens from his unbelief. But, as he wrote in a 1998 essay, it did prompt him to think that Judaism “might turn out to be the most ethically sophisticated tributary of humanism.”

Quietly, Hitchens began to make a point of visiting local synagogues if he found himself traveling, as he once put it, “in some near ‘Judenrein’ spot such as Istanbul or Asmara or Sarajevo or Salonika or Damascus.”

Rabbi Goldburg was “an Einsteinian and a Shakespearean and a Spinozist, who had married Arthur Miller to Marilyn Monroe and had a copy of Marilyn’s conversion certificate,” Hitchens tells us in his 2010 memoir, “Hitch-22.” And he ultimately officiated at Hitchens’s own wedding to Carol Blue, who survives his death on December 15 after a long bout with cancer.

But Hitchens’s newly discovered Jewish status did nothing to change his views on Israel or on Zionism. In the mid-1970s, a Jewish settler in Hebron told Hitchens his authority to squat there came from God. “This was where I began to feel seriously uncomfortable,” he wrote in his memoir. “Some such divine claim underlay not just ‘the occupation’ but the whole idea of a separate state for the Jews in Palestine.”

He added: “Take away the divine warrant for the Holy Land and where were you, and what were you? Just another land-thief like the Turks or the British, except that in this case you wanted the land without the people.”

In this respect, Hitchens, despite all the other ideological changes he would undergo, including his late-life flight to the right, remained a “non-Jewish Jew,” as one of his great models, Isaac Deutscher, first articulated the concept.

It was in 1968 that the renowned Polish-Jewish intellectual published his famous essay of the same name in which he extolled the heretics, from Elisha ben Abuyuh to Spinoza, from Heine and Marx to Freud and Einstein, who “found Jewry too narrow, too archaic, and too constricting.” Such intellectuals, Deutscher observed, “represent the sum and substance of much that is greatest in modern thought, the sum and substance of the most profound upheavals that have taken place in philosophy, sociology, economics, and politics in the last three centuries.” Deutscher, like Hitchens, was skeptical of the Jewish nation-state, and urged a “return to the political heritage that the genius of the Jews who have gone beyond Jewry has left us — the message of universal human emancipation.”

Hitchens’s relationship to his Jewish roots, such as they were (his father was Protestant) echoes that of Daniel Deronda, the protagonist in George Eliot’s unjustly neglected novel of the same name. Upon discovering his own Jewish identity, Deronda is asked by his mother, “Why do you say you are glad? You are an English gentleman. I secured you that.”

Christopher’s mother did the same for him, hiding her Jewishness from both her husband and children, while insisting to her husband, when Christopher was still a tot, “If there is going to be an upper class in this country, then Christopher is going to be in it.” She succeeded well enough in ensuring “that I never had to suffer any indignity or embarrassment for being a Jew,” Hitchens wrote in his memoir.

But, to quote Jonathan Miller, the British theater director and humorist, Hitchens was “Jew‑ish” long before he learned that he was Jewish. As a schoolboy, Hitchens already observed “that among my few reliable allies in a fairly self-satisfied school were the boys with what I gradually understood were Jewish names.” Soon after, he learned about “the special place of the Jews in the internationalist tradition I so admired.”

In “Hitch-22,” he singles out the great Rosa Luxemburg in just this spirit, hailing the Marxist leader’s rejection of Jewish tribalism and embrace of internationalism as the epitome of Deutscher’s ideal. “The sage Jews,” Hitchens wrote, “are those who have put religion behind them and become in so many societies the leaven of the secular and the atheist.”

He also disputed the claim that Zionism was a cure for anti-Semitism, which he regarded as “ineradicable and as one element of the toxin with which religion has infected us.” Moreover, he said, “One of my first reservations about Zionism was and is that, semiconsciously at least, it grants the anti-Semite’s first premise about the abnormality of the Jew.”

Like Deutscher, Hitchens believed “the Jews will not be ‘saved’ or ‘redeemed,’” and certainly not by the nation-state: “The important but delayed realization will have to come: Israeli Jews are a part of the Diaspora, not a group that has escaped from it. Why else does Israel daily beseech the often-flourishing Jews of other lands, urging them to help the most endangered Jews of all: the ones who rule Palestine by force of arms?” On this issue, Hitchens remained steadfast and principled.

Let me be clear: I could never forgive Hitchens, with whom I worked off and on at The Nation for more than a decade, for his embrace of George W. Bush, Dick Cheney and company, and the murderous, unprovoked war they launched against Iraq. There were plenty of other offenses from Hitchens even before that, including his attack on abortion rights, his praise of 2 Live Crew’s misogynistic lyrics, his casual insistence that the conquest and genocide of North America’s native inhabitants “deserves to be celebrated with great vim and gusto,” and his stubborn, madly obsessive campaign to impeach Bill Clinton. Not to mention some grotesque personal betrayals. But Hitchens at his best — and he was as brilliant as he was eloquent on an astounding range of subjects both literary and political — was an inspiration. As I reread much of his work these days, I find that he still is. In large part, it’s that heretic spirit celebrated by Isaac Deutscher that makes him so.

Roane Carey is managing editor of The Nation. Contact him at [email protected].