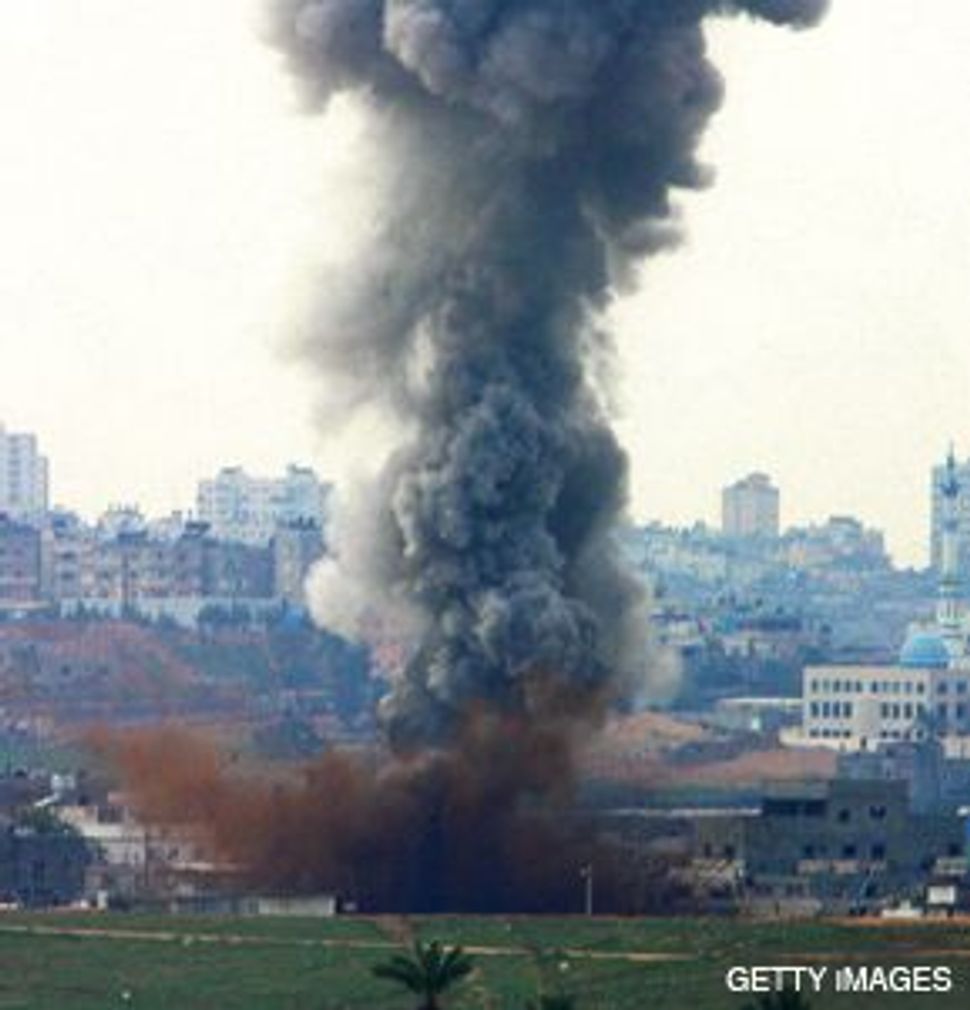 THE HORIZON: Smoke billows from a location that the Israel air force targeted in the Gaza Strip. Dovish Jewish groups have called for Israel to push for an immediate cease-fire in the Gaza conflict.

Washington – Breaking ranks with most Jewish organizations, several dovish pro-Israel groups have come out against Israel’s military operation in Gaza and called on the United States to push for an immediate cease-fire. 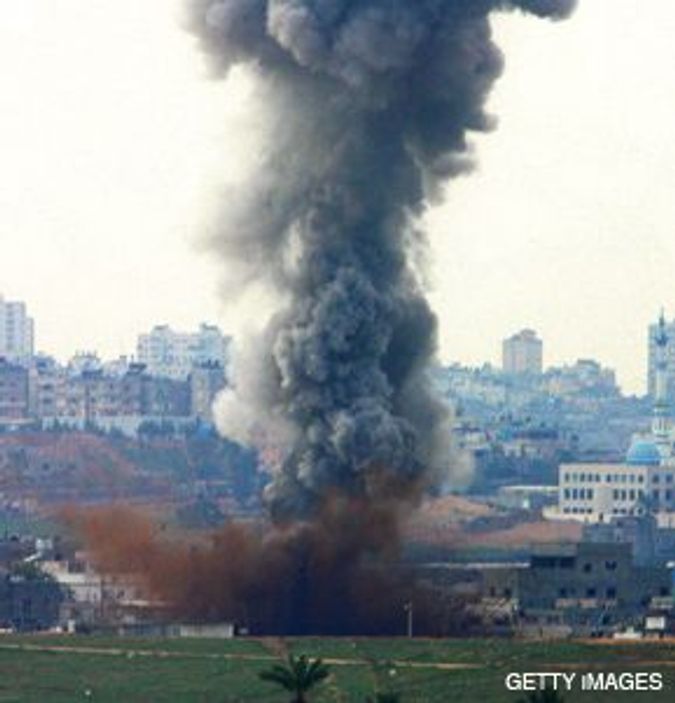 THE HORIZON: Smoke billows from a location that the Israel air force targeted in the Gaza Strip. Dovish Jewish groups have called for Israel to push for an immediate cease-fire in the Gaza conflict.

The calls for Israel to hold its fire were in striking contrast to the otherwise solid support in the Jewish community for the Israeli attack. Jewish groups have also arranged for media briefings and pro-Israel rallies in support of the Gaza attack.

The groups to the left — Americans for Peace Now, J Street, Israel Policy Forum and Brit Tzedek v’Shalom — went to great lengths to stress their understanding of Israel’s power to take action against rocket firings on Israeli civilians by Hamas and other groups from Gaza. They called on Hamas to stop the launchings unconditionally. Still, they decided to voice concerns over Israel’s decision to launch a wide-scale military operation.

“This is the moment in which you need to stand up and say what you believe,” said Jeremy Ben-Ami, executive director of J Street. “We sat silent and quiet for too long in this country.” Ben-Ami pointed to the vibrant debate being waged in the Israeli press about the length and breadth of the military operation.

A statement issued by the group said that the Israeli attacks “deepened the cycle of violence” and that “only diplomacy and negotiations can end the rockets and terror and bring Israel long-term security and peace.”

J Street is the newest player in the dovish pro-Israel scene, and according to Jewish communal officials, it has managed to stir more activity and a sense of competition among other left-leaning Jewish organizations.

Americans for Peace Now, one of the older groups active in promoting a two-state solution, issued a more cautious statement. It stressed the need for America’s immediate involvement in restoring the cease-fire — a role that the Bush administration has thus far declined. Steering clear from directly criticizing the Israeli military operation, APN instead cited the call by its Israeli sister organization, Peace Now, for an end to the military operation. The group’s president and CEO, Debra DeLee, issued a statement saying, “Any real resolution to this crisis will require Israel and Hamas to engage, directly or indirectly, to achieve a cease-fire and to further engage in a post-cease-fire political process.”

APN spokesman Ori Nir said that during the Lebanon War in 2006, and in several other instances, the group was “skeptical about the viability and the value of military action.” Still, he stressed that APN “does not second-guess Israel’s judgment.” Nir noted that his group has been calling for a negotiated cease-fire ever since the Hamas takeover of Gaza in June 2007.

The Israel Policy Forum called on the Bush administration to act immediately to reach a cease-fire. “The cycle of violence,” said Nick Bunzl, IPF’s executive director, “runs counter to Israel’s long-term security.” Brit Tzedek v’Shalom, a grass-roots pro-peace movement, issued a statement warning of the possible negative consequences of the military operation. “We can already anticipate that this incursion will be yet another failed attempt to resolve this fundamentally political conflict by military means.”

The dovish groups’ ability to be heard in the corridors of power received a boost recently when the groups were invited along with other, more established Jewish organizations to meet with the transition team of President-elect Barack Obama.

But for most of that Jewish establishment, solidarity with Israel and support for its actions at a time of war remained the only course of action.

The Conference of Presidents of Major American Jewish Organizations, which was set up as the organized Jewish community’s consensus voice on foreign policy, issued a statement backing the Israeli government’s decision to take military action. Similar statements came from the Jewish Council for Public Affairs and from most national Jewish groups.

In an open letter to the president, the American Jewish Committee thanked Bush for his support for Israel’s actions, adding that the group “will forever be grateful.”

David Harris, executive director of the AJCommittee, told the Forward that he believes the Jewish community should show its support for Israel while the fighting is ongoing. “I think people should be cautious, especially at a time of war, but I’ve learned to understand that the Jewish world is the Jewish world,” Harris said, “and even when it is clear to people like me where our support should be, unfortunately this is not the reality for all.”

The American Israel Public Affairs Committee, the pro-Israel lobbying group, directed its support of Israel’s Gaza campaign not only at the administration, but also at Congress. “We applaud the bipartisan coalition of American leaders who have stood up in support of Israel’s right to defend its citizens, a clear sign of the strong ties between the United States and Israel,” said David Victor, Aipac’s president.

Leading members of Congress, including House Speaker Nancy Pelosi and Senate Majority Leader Harry Reid, expressed unconditional support for Israel’s military operation — an indication of the dovish groups’ still minor influence on Capitol Hill. Congress’s broad backing for Israel’s tough measures also serves as a signal to the incoming Obama administration that it will be facing the same constraints as previous administrations have when it comes to Middle East policy.

Ben-Ami hopes that the online petition his group has put out, calling for an end to the Israeli operation in Gaza, will send the opposite message to members of Congress and to the new administration. “We want to show them they have more space to think about how to move forward in the Middle East,” he said.