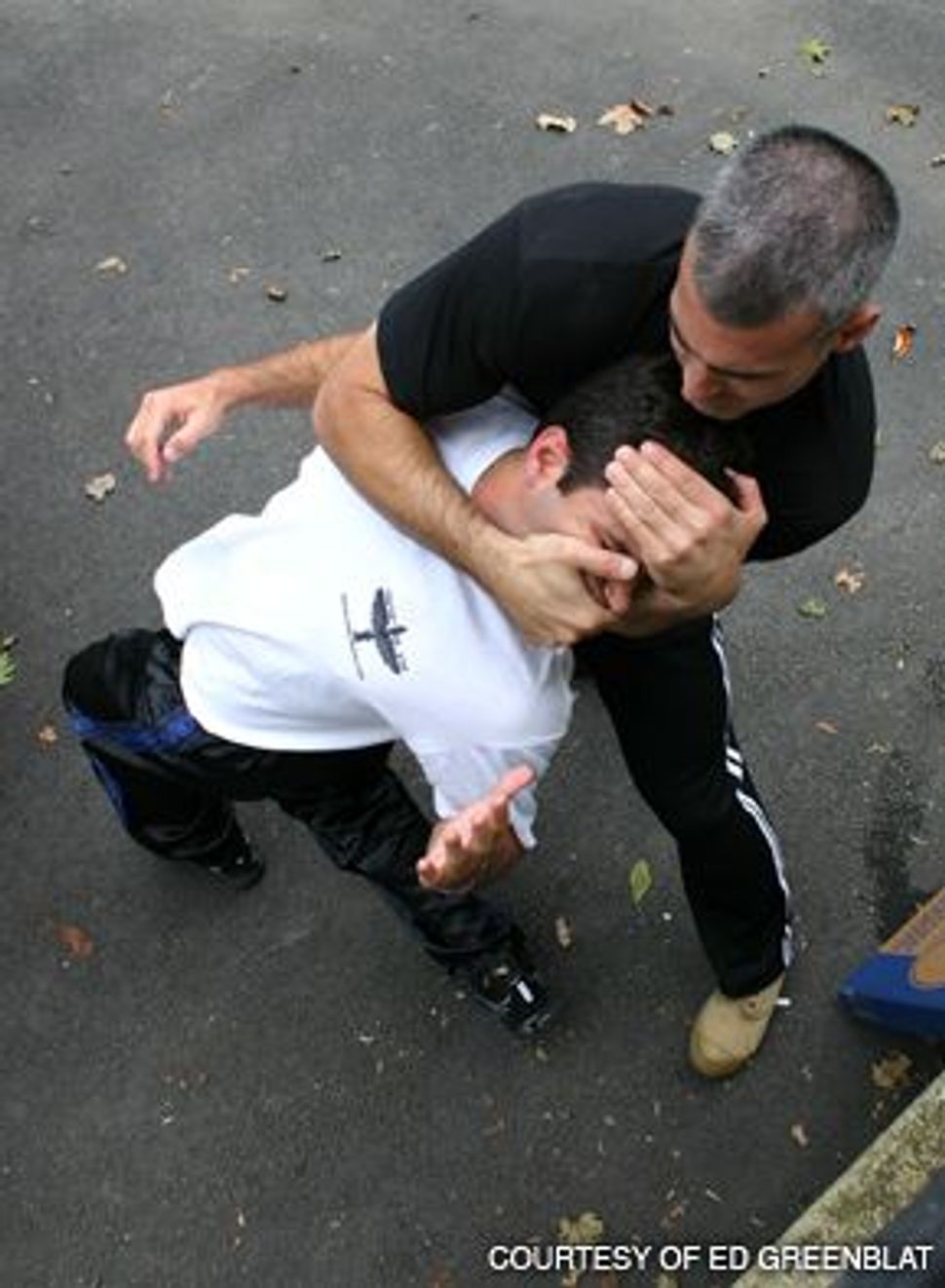 THE MASTER AT WORK: Krav Maga expert David Kahn (right) demonstrates how to subdue an adversary.

When grandmaster Haim Gidon, a top-ranking practitioner of the Israeli martial art of Krav Maga, entered a studio in New Jersey on a recent Monday, the 20-odd people in the room stopped pummeling each other and lined up like soldiers standing at attention. Gidon was visiting from Israel to give them advanced training, and the students — who included law enforcement officers, military personnel and Grammy Award-winning singer-songwriter John Mayer — treated him like a commanding officer. 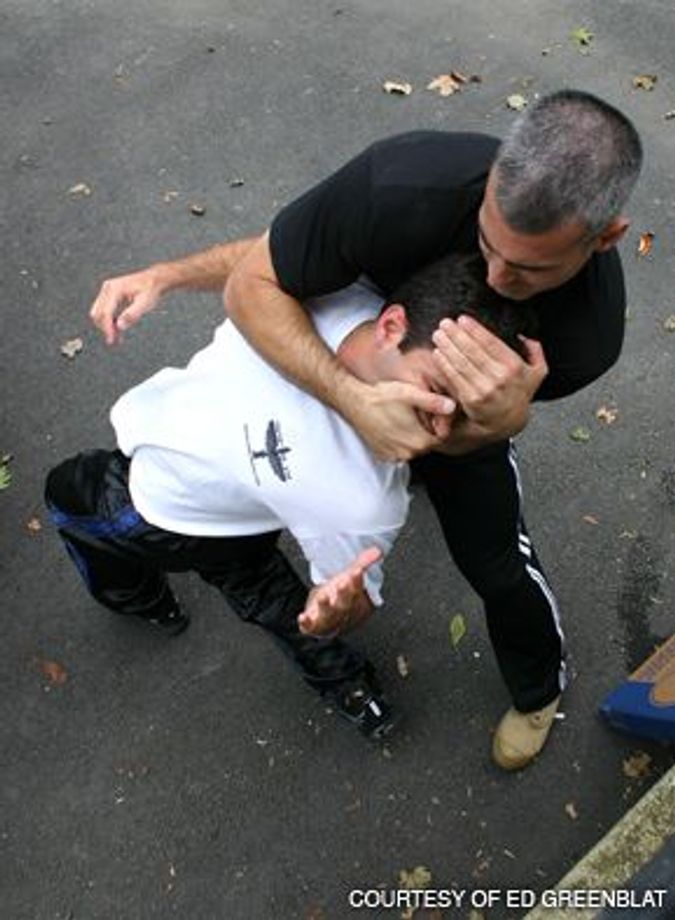 THE MASTER AT WORK: Krav Maga expert David Kahn (right) demonstrates how to subdue an adversary. 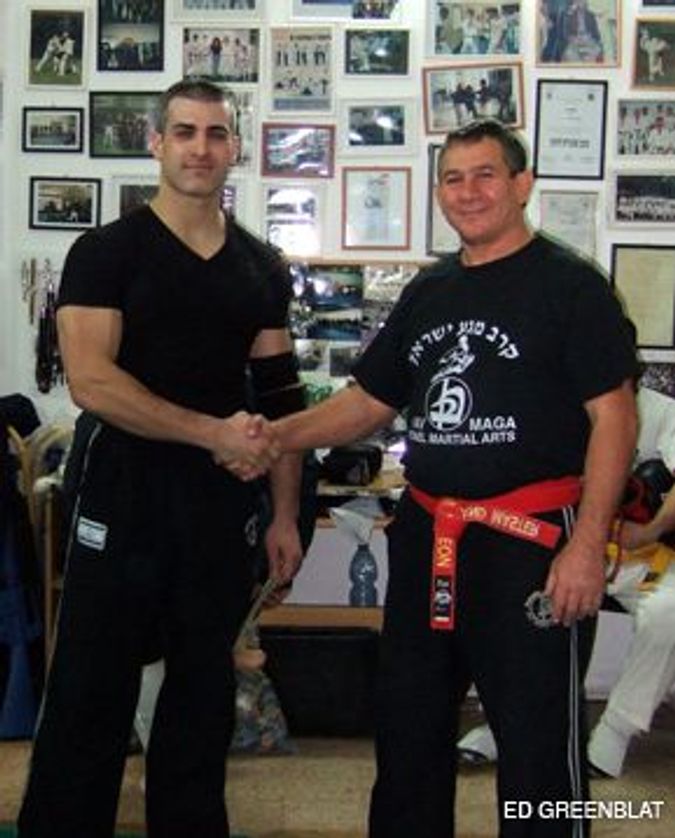 But in an interview with the Forward after the session, Gidon seemed less eager to talk about his new acolytes than about his old adversaries — the other disciples of Krav Maga founder Imi Lichtenfeld who formed rival organizations after his death in 1998.

The strange journey of krav maga — a martial art characterized by gritty street-fighting techniques and, these days, by equally gritty animosity between the organizations that teach it — began in Czechoslovakia just before World War II, when Lichtenfeld, a young gymnast, developed it as a self-defense technique against fascist predators. Lichtenfeld brought the discipline with him to Israel, where it became absorbed into Israeli military training. There, soldiers like Gidon became Lichtenfeld’s top students — and later spread krav maga around the world.

Krav maga has been taught in the United States at least since the early 1980s, and today hundreds of classes are offered throughout the country, many of them in conjunction with military and police training. Its popularity has spiked in the last couple of years as celebrities like Leonardo DiCaprio and Jennifer Lopez have undergone training.

But the technique’s growing popularity has also intensified tensions between the organizations that teach it — over the authenticity of their methods, the realism of their fighting techniques and even the use of the term “krav maga.”

“They all hate each other,” said Elizabeth Greenman, who teaches the martial art in New York through an organization called Commando Krav Maga. “Every group hates each other. In the end it’s about money and clientele.”

Until recently, there were four main krav maga organizations in the United States, each with a counterpart in Israel. Each claims that its founder was Lichtenfeld’s chosen successor and the recipient of privileged knowledge about krav maga. Each group also claims that it has kept Lichtenfeld’s system intact while expanding upon it. But they tend to suggest their rivals have bastardized the form — even going so far as to argue that at least some of the others are shysters trying to exploit the krav maga boom.

None of this is a secret: The groups’ Web sites come equipped with lengthy histories of their respective founders’ special relationship with Lichtenfeld, and often pages of documents signed by the late master that purport to prove their leader’s preeminence.

“We are simply the guardians of this art. We don’t care about politics, we don’t care about who is the leader and who is the head,” said Rhon Mizrachi, head of the Krav Maga Federation, in between tirades about other groups. “We want to make sure this art will never die.”

Greenman, for her part, is on her third krav maga organization in 10 years. First she trained and taught in Los Angeles with Krav Maga Worldwide, the largest and most litigious of the main krav maga schools in the United States. When she left for New York and got certified as an instructor by the Israeli Krav Maga Association, Gidon’s group, she said, Krav Maga Worldwide demanded that she drop the term “krav maga” from her advertising. Later, she began training with Commando Krav Maga, a newer organization that professes a fighting technique she finds most realistic — and which is often denounced by the older associations as an interloper.

Tensions between the organizations came to a head in 2006 when Krav Maga Worldwide head Darren Levine, who had trademarked the term “krav maga” some years before, sued other organizations and individuals for millions of dollars for their use of the term. A Los Angeles federal court judge ruled that the term was generic and could not be trademarked, but not before some extremely personal ruptures. One of the people Levine sued was Mizrachi, his former teacher. Another was Eyal Yanilov, head of the International Krav Maga Federation, who said that he had attended Levine’s wife’s funeral two weeks earlier.

Jon Pascal, who runs training programs for police officers for Krav Maga Worldwide, shrugged off the question of personal vendettas.

All of this poses a problem for people like David Kahn, a protégé of Gidon’s who runs the Israeli Krav Maga Association in the United States. Kahn is a young, well-spoken American who played football at Princeton and fell in love with krav maga not as a soldier but as a martial arts devotee. He has written two books on krav maga and is working on a third, and has attracted celebrities like Mayer and “Sopranos” star James Gandolfini to the studio he opened in New Jersey two years ago.

This is the studio where Gidon came to guest-teach in December. Gidon, a former Israeli tank driver, looked right at home among the room’s Israeli and American flags and its rack of fake plastic guns. After class, when Gidon started fulminating to a reporter about imposter krav maga associations, it was Kahn who seemed uncomfortable.

“There are people who want to kill every one of us regardless of what krav maga association we belong to,” Kahn said later in a phone interview. “The internecine conflict is detrimental to all of us, but I don’t see it changing anytime soon.”

For now, at least, Kahn’s students seem to have got the gist of krav maga’s larger message — that you should always be prepared for the people who want to kill you — without having gotten caught up in the infighting. Frank Colucci, a student in an instructors’ training class who served in the United States Navy, said that he has been impressed with Israeli fighting techniques since the 1980s, when he was stationed in Haifa.

“I know Israelis are true fighters and warriors, so just knowing the mindset of the people, the history, I know it has got to be an excellent self-defense system,” Colucci said.