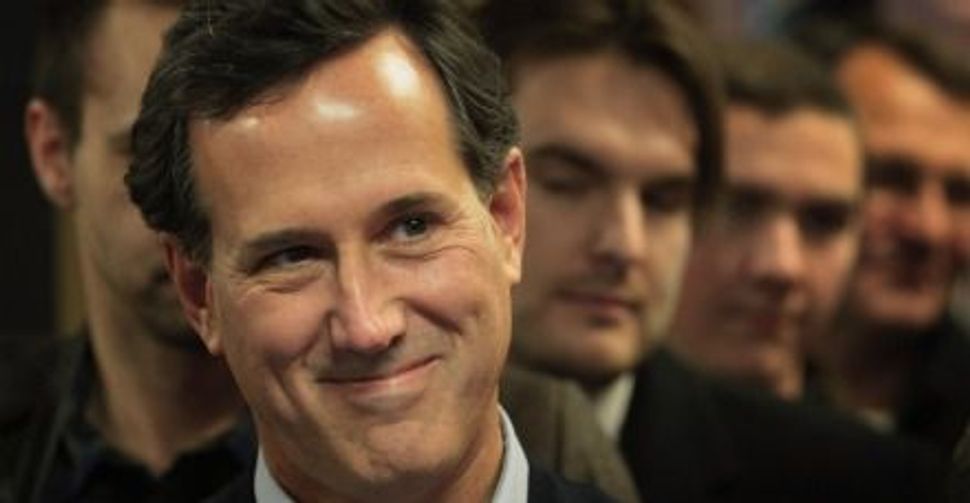 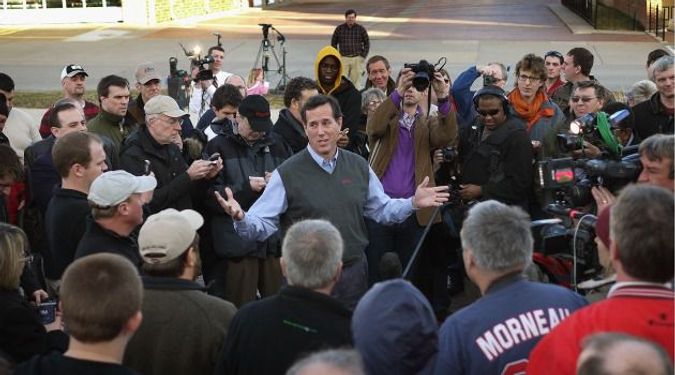 ?It?s Game On?: Once a longshot, Rick Santorum is celebrating his narrow loss in Iowa and pushing on to the New Hampshire primary next week. Image by getty images

Rick Santorum, who shocked the political world by coming within a whisker of winning the Iowa Republican caucuses, has long touted his pro-Israel and anti-Iran policies on the campaign trail. But Santorum still faces a tough road ahead as he fights to prove he belongs on the national stage.

His ultraconservative ideology, which includes an anti-gay agenda, opposition to abortion rights and questioning of the theory of evolution, has long been a barrier distancing him from the Jewish electorate.

Santorum’s supporters are touting the former American senator’s outreach to Jewish organizations in fighting for religious freedom and combating anti-Semitism despite their differences on family and domestic issues.

“He takes his religion very seriously,” said Barbara Ledeen, a former Senate staffer who worked closely with Santorum. referring to his Catholic beliefs. “He always told me he believes that Catholics and Jews are the canaries in the coal mine, warning against religious prejudice.”

“Behind Door No. 2 is [Santorum], the most anti-choice, socially conservative candidate in the field,” said David Harris, president and CEO of the National Jewish Democratic Council, adding that Santorum would “ban homosexual activity.”

After battling front-runner Mitt Romney to a virtual dead heat in Iowa, Santorum faces a struggle to build national credibility as the campaign moves on to New Hampshire and beyond, analysts say.

“In the next week or two, he will be getting a closer look and will perhaps be subject to negative ads,” said Tim Hagle, an associate professor of political science at the University of Iowa. “The question for many voters will be: Is Santorum electable, or is he too conservative to win over independents and challenge [President Obama]?”

Santorum won 25% of the vote in Iowa and lost to Romney by just eight votes. All but declaring victory, Santorum vowed to fight across the country as a conservative alternative to Romney. The next battle is in New Hampshire on January 10, followed by South Carolina on January 21.

Santorum’s position on the right wing of the field could be bolstered if Texas Governor Rick Perry drops out of the race. After his poor showing in Iowa, Perry returned home to “reassess” his campaign. Michelle Bachmann threw in the towel after getting just 5% in Iowa.

Newt Gingrich has also positioned himself as a right-wing, pro-Israel alternative to Romney, who has collected the most support among Jewish Republicans so far. Gingrich says he will continue in the race despite winning just 13% of the Iowa vote.

“A lot depends on whether… Perry drops out, since they were also competing for the same social conservative votes,” Hagle said.

Santorum represented Pennsylvania in the Senate from 1995 to 2007, but he lost his bid for a third term to Democrat Bob Casey. After announcing his run for the Republican nomination last year, Santorum virtually moved to Iowa, spending much of his time and money on the Hawkeye state.

Until December, he failed to move the needle in local and national polls. He suddenly surged in polls in the last days before the Iowa caucuses.

Santorum’s appeal to Jewish voters is based on his proven congressional history of supporting Israel. “Very few things speak as compelling to a voter or to a supporter as a record, a history of what you’ve actually done,” said Ben Chouake, president of NORPAC, a New Jersey-based political action committee that raises money for candidates based on their views on Israel. “You have a guy like Gingrich and a guy like Santorum, two candidates who have been extraordinary on our issue when they were in office. It wasn’t a side issue,” Chouake added, “it was, ‘How can I get this done?’”

In his zeal to show off his pro-Israel credentials, Santorum appeared to go overboard when he called the occupied Palestinian territories “Israeli land” at a campaign event. He also dismissed the rights of Palestinians living on the West Bank, even though the Israeli government itself recognizes them.

“All the people who live in the West Bank are Israelis,” Santorum told a young man who questioned him about the peace process. “They are not Palestinians. There are no Palestinians.”

Santorum showed some vulnerability on his pro-Israel record when asked, in a December 28 CNN interview, whether he’d vote for Ron Paul if the Texas isolationist libertarian wins the Republican nomination.

“Absolutely,” Santorum replied, although he added that he’d “have to take a lot of antacid” before entering the voting booth. Jewish Democrats highlighted Santorum’s willingness to support Paul ,who is known for his strong anti-Israel approach to foreign policy.

A glance into Santorum’s potential problem with Jewish voters was provided during the RJC candidates’ forum, when a member of the audience asked the former Pennsylvania senator how he could convince Jewish voters holding moderate views on social issues to support him. Santorum dismissed the issue, explaining that there are no major differences between all candidates on topics such as abortions or gay and lesbian rights.

Going beyond opposition to same-sex marriage — a view shared by other Republican candidates — Santorum is on record voicing support for banning homosexual relations by law. In the Senate, he sought to pass legislation mandating schools to question the validity of the theory of evolution. And in a book he wrote about family values, Santorum suggested mothers not go out and work.

“There are numerous views in the Jewish community. On some, people will rally in support of Santorum, and on some, people have questions,” said Hank Butler, executive director of the Pennsylvania Jewish Coalition, a statewide advocacy group for Jewish federations.

Santorum’s main backer in the Jewish community is fellow Pennsylvanian Alan Miller, who sits on the RJC’s board. Miller is the chairman and CEO of Universal Health Services, one of the nation’s largest hospital management firms.

As chairman of the Senate Republican Conference, one of the key Senate leadership positions, Santorum initiated a semiannual meeting of Republican members with representatives of all Jewish organizations, regardless of their views. The atmosphere in the meetings, as recalled by a Jewish activist who took part in the discussions, was positive, and both sides avoided touching on such thorny issues as judicial nominations and family values.

“His proactive effort to work together on important issues like confronting a re-emergence of anti-Semitism was meaningful, constructive and very welcome,” said Stacy Burdett, the Anti-Defamation League’s director of government and national affairs in Washington.

Santorum also was the driving force behind the formation of a caucus on religious freedom, in which representatives of all faiths raised issues that concerned them. Following the 2001 Durban Conference, Santorum summoned representatives of American nongovernmental organizations to discuss the conference’s anti-Israel bias, and he later sponsored a Senate floor discussion on the rise of worldwide anti-Semitism.

“Whatever Jews may think about his views on abortions or gay rights, he was really engaged on issues important for the community,” Ledeen said.