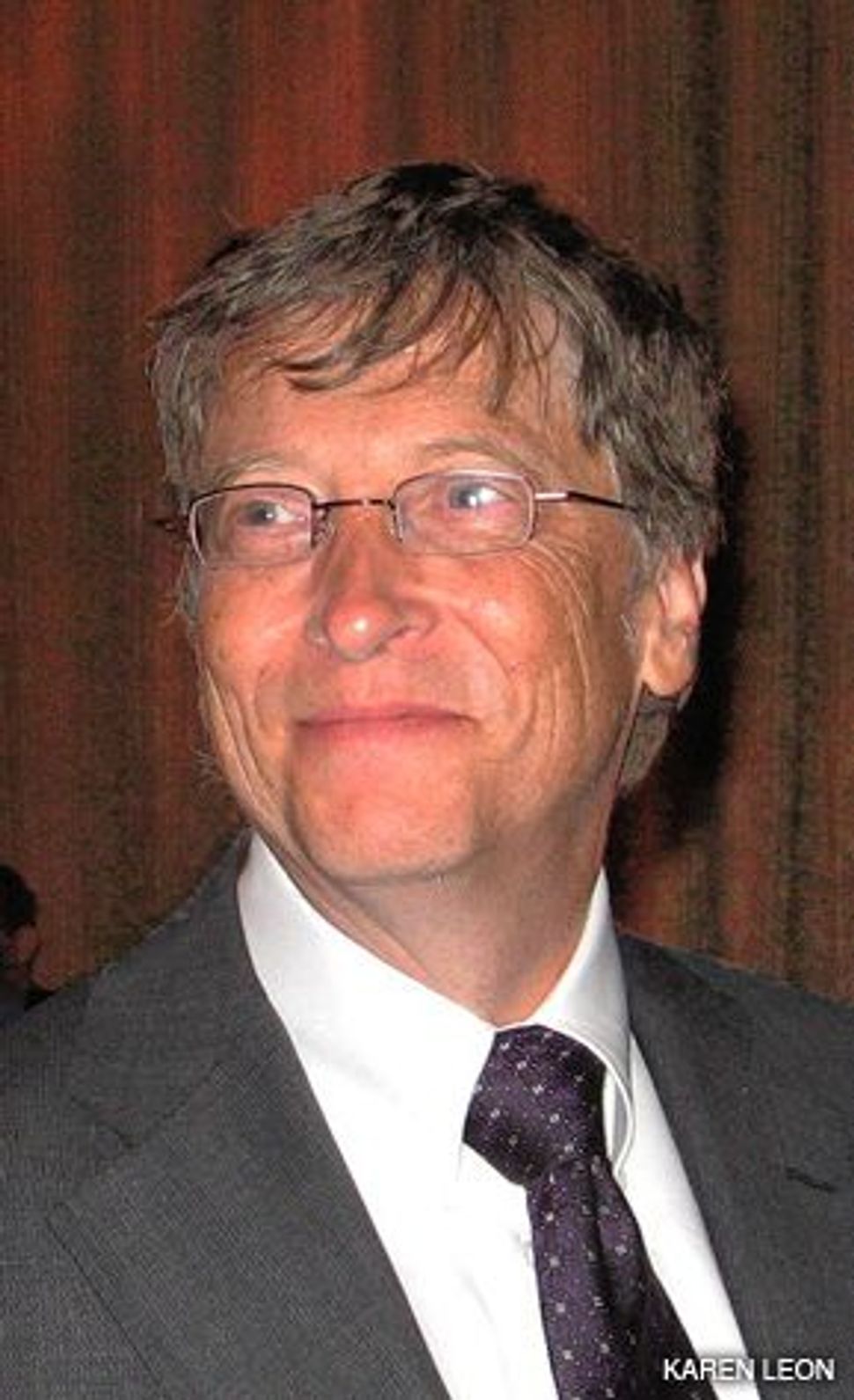 BILL GATES TOUTS ISRAEL’S HEBREW U. AS AGRICULTURAL LABORATORY TO THE WORLD 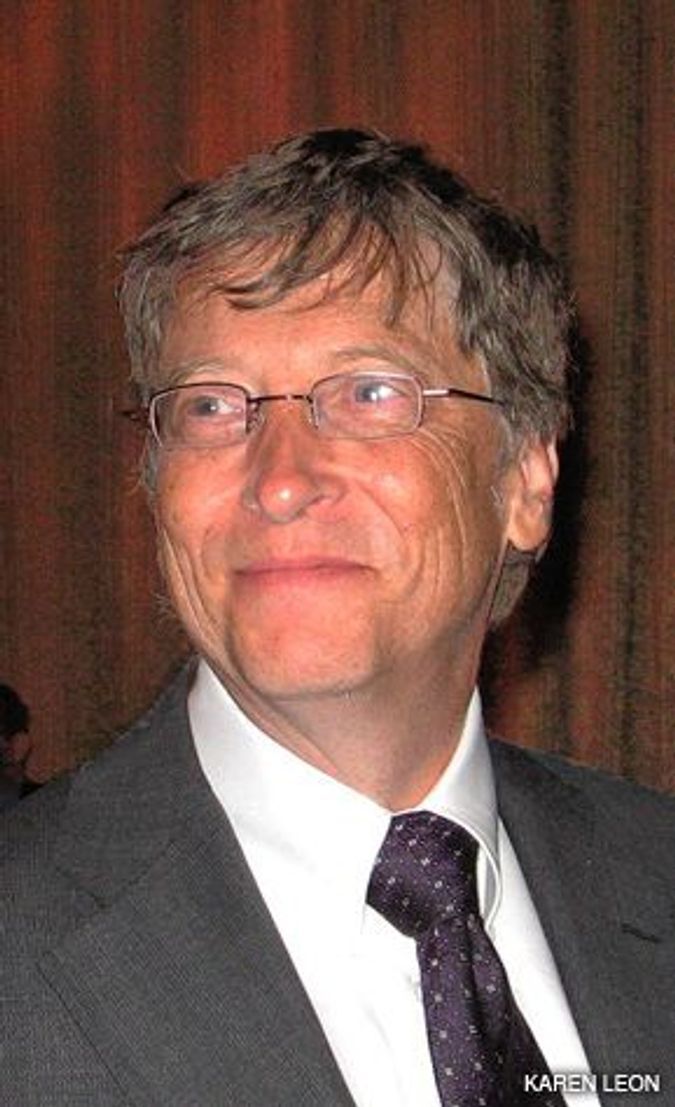 Calling the Einstein Award, presented to him at the December 2, 2008, American Friends of the Hebrew University gala, “the goy award,” Microsoft founder and chairman Bill Gates, its first recipient, got a roaring welcome from the nearly 600 guests at the New York Hilton. “I can’t think of where ‘Einstein’ became shorthand for ‘smart.’ There is no baby Copernicus,” Gates joshed.. “The Internet makes it possible for us to see misery around us.” With his wife, Melinda, Gates started the Bill & Melinda Gates Foundation, dedicated to combating hunger, disease and poverty worldwide. Citing Hebrew University’s innovative research protocols, Gates touted Israel as “an agricultural laboratory to the world.” Noting that three-quarters of the water used in Israel is recycled, Gates said, “What Israel has learned [about recycling water] will help China,” which is struggling with serious water pollution. In keeping with Hebrew University’s slogan, “Feeding the world through sustainable agriculture,” some 800 golden peppers, used as table centerpieces, were earmarked for City Harvest.

AFHU board member and event co-chair Harvey Krueger introduced the evening’s keynote speaker, Walter Isaacson, who delighted the crowd with his brilliant and entertaining discourse on Albert Einstein, one of the founding fathers of Hebrew University. Isaacson, president and CEO of the Aspen Institute, past chairman and CEO of CNN, and editor of Time magazine, spoke extempore. As author of the 2007 book “Einstein, His Life and Universe” (Simon & Schuster), Isaacson offered a cavalcade of Einsteiniana. “Einstein was the coolest person to walk this earth,” yet “he was no Einstein as a kid — neither was Bill Gates.… Known as ‘the dopey one’ as a kid, Einstein failed math as a child. He was rebellious… still he knew what was inside the box before you go ‘outside the box.’” Isaacson peppered his dissertation with a series of Einstein quotes: “I don’t believe God would play dice with the universe.… Yes, I am religious. I believe there is a spirit… we must be humbled and awed. The university is like a library, we know things are written.’” And from Einstein’s speech, given on his final day at Princeton University, Isaacson quoted: “‘I speak to you not as an American or a Jew, but as a human being.’

In a film narrated by Billy Crystal, Hebrew University was lauded for several of its developments: drought-resistant crops that were ideal for Africa, a strain of rice rich in Vitamin A to help prevent blindness and mushroom stalks that are used as fertilizers for other crops.

Ranked among the top 100 academic and research institutions in the world, Hebrew University of Jerusalem, located on three campuses, with a fourth in Rehovot, attracts more than 24,000 students from more than 70 countries. Hebrew University is ranked 12th worldwide in biotechnology patent filings and commercial development by Los Angeles’s Milken Institutes.

“Cancer is like terrorism… Cancer is like Manhattan traffic… like getting stuck in a tunnel, waiting for a light,” said Sadie Jemal-Meyers, a cancer survivor who received the Tower of Hope Humanitarian Award at the Israel Cancer Research Fund’s December 2 gala. Meyers told the guests at the St. Regis that her father, who had moved to Israel from Syria, had fought in Israel’s War of Independence in 1948. “What impressed me was how major a role Israel is playing in cancer research,” said ICRF Project grant recipient Joel Yisraelli, a Milwaukee-born professor in the department of anatomy and cell biology, Hebrew University/Hadassah Medical School. Yisraeli, who works with frog embryos, focusing on the role of certain proteins in cancer cells to develop ways to target cancer therapy, joked: “In school, one of my kids described my work as, ‘My father is a frog doctor who teaches frogs.’” Rabbi Joseph Telushkin, who delivered the evening’s invocation, touted the concept of “He who saves a life saves the world… each life has infinite value. When you save lives, you save a multitude of infinities.… This is holy work.”

Master of ceremonies Ben Brafman a criminal lawyer then in the midst of defending New York Giants player Plaxico Burress, who shot himself in the leg, noted: “In today’s New York Times… there is a picture of me and an athlete; on page six there is a picture of a child whose parents were killed in Mumbai because they were Jews.” In introducing the accessibility of ICRF’s chairman, oncologist Yashar Hirshaut, Brafman joked, “You can go into his office, and 50 women will have the same appointment.” Hirshaut said: “I never heard of Mumbai as a financial center as I had heard of Wall Street! Who would have thought that in that city, a father of two young children with Tay-Sachs [would] be exposed to terrorists trying to make a point. Not for one minute was there a concern about human life.… At ICRF, we do everything we can to do battle against suffering.… This year, 61 research labs are supported by ICRF funds.”

Whenever I ran into Gerald Schoenfeld, who died of a heart attack at 84 this past November, he greeted me as “the Forverts lady.” As chairman of the Shubert Organization, he reigned over a Broadway empire that included 17 theaters and produced such blockbusters as “Dreamgirls,” Cats” and “A Chorus Line.” Last year, as I was cutting through Shubert Alley, Schoenfeld, riding in an open van, spotted me and called out: “I have a story for you, but I can’t tell it in Yiddish. Mr. Schwartz, once a big cheese at the Forverts, gets a job at The New York Times as a lowly cub reporter. As he passes the Soviet Mission, there is a big explosion. Schwartz races to a telephone and calls the Times’ Metropolitan editor and yells, ‘Hold the back page!’” It’s a joke he’d told me before; still I laughed. Schoenfeld waved, then ordered the van driver to “move it!”

I first met Schoenfeld (aka “The Chairman”) on January 27, 1992, at the Theatre Hall of Fame 20th Anniversary Award Ceremony, held at the Gershwin Theatre. Schoenfeld was one of the presenters at the ceremony, which honored those inducted the previous year. Inductees included Stella Adler, Anne Bancroft, Cy Coleman, Patricia Ziprodt, Hanya Holm, Gene Kelly, Gene Saks and James Nederlander. There were special tributes to Colleen Dewhurst and Joseph Papp. The evening’s other award presenters and accepters included Kitty Carlisle Hart, Elaine Stritch, Harold Prince, Keith Carradine, Hume Cronyn, Ruby Dee, Betty Comden, Irene Worth, Adolph Green, Tom Oppenheim and Zoe Caldwell. With such dramatic company at his disposal, Schoenfeld is no doubt already brokering deals for a series of theaters to arrange for productions in Shubert Alley Heaven.