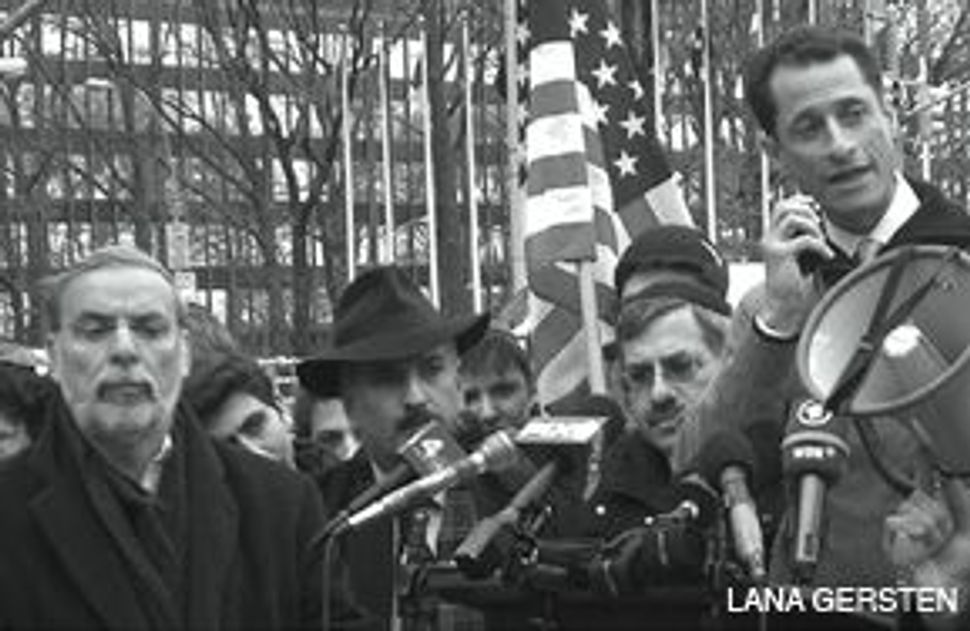 Los Angeles — Within days of Israel’s initial air strikes on Gaza, the grass-roots pro-Israel group StandWithUs had set up a “Web Situation Room” to counter online criticism of the Jewish state. 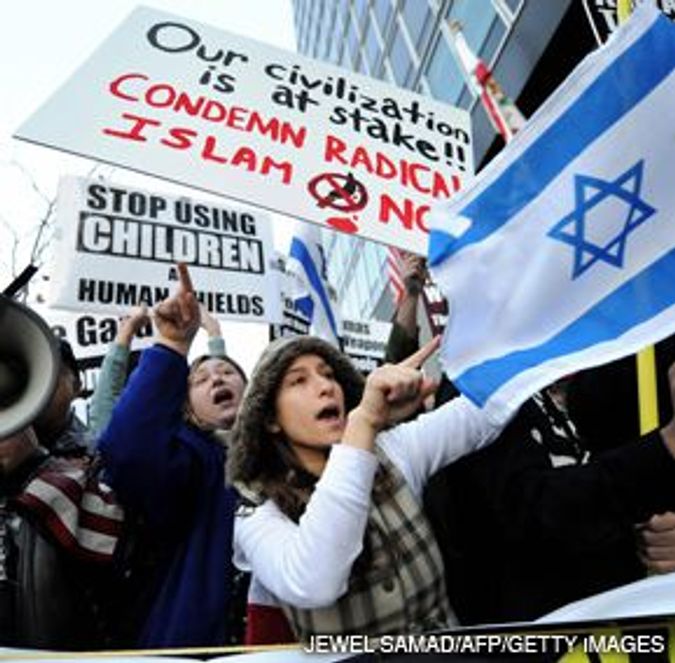 MOBILIZE: Groups supporting the Israeli operation in Gaza held rallies in cities across the country, including this one in Los Angeles. Dovish groups, meantime, focused their efforts on lobbying in Washington. 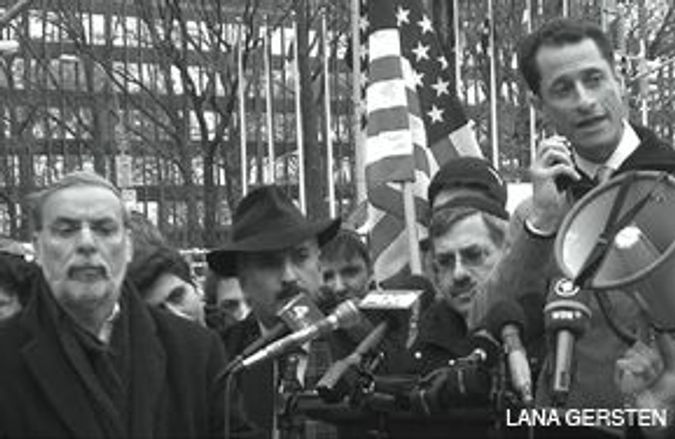 In Israel, The Israel Project, which works to bolster Israel’s image in the media, had created a temporary office in Ashkelon, where foreign journalists were holed up at the Holiday Inn.

And in Washington, the powerful pro-Israel lobby the American Israel Public Affairs Committee had, according to congressional sources, begun lobbying Congress to pass a resolution expressing support for Israel’s actions. Such a resolution passed the Senate on January 7.

In addition, the Conference of Presidents of Major American Jewish Organizations urged Jewish activists to block any potential United Nations involvement in the current crisis. And the Jewish Council for Public Affairs is sponsoring rallies and other events in support of Israel’s actions.

While those groups supporting Israel’s actions in Gaza are not working expressly with one another, the sum total of their crisis-mode efforts demonstrates the ability of American Jewish groups to move swiftly and effectively on behalf of the Jewish state on a variety of fronts — from the halls of Congress to the lawns of college campuses.

Since December 27, when the Gaza offensive began, StandWithUs has been among the most visible and vocal of these groups. In recent weeks, the Los Angeles-based not-for-profit group has co-organized at least a dozen pro-Israel rallies in such cities as New York, Seattle and Chicago.

One such StandWithUs-backed rally was one held on a recent Friday afternoon in Los Angeles. Hundreds of Israel supporters lined Wilshire Boulevard, carrying signs that read “Israel we stand with you” and “Peace only after the rockets stop.” The sound of cars honking mixed with the crowd’s cheers, as drivers beeped their horns in a show of solidarity with the rally’s message.

“I’m here to show that there are people who support Israel, unlike what the media depicts,” said one demonstrator, 19-year-old Sheree Asher.

Critics of StandWithUs contend that the organization lacks empathy for the plight of the Palestinians and that its definition of “pro-Israel” means giving carte blanche to the Israeli government. But even the organization’s ideological opponents are taking note of how effectively the independent activist StandWithUs has managed to rally its troops. “I give them credit for their organizing ability,” said Gerald Bubis, a longtime Jewish communal observer who sits on the national board of the dovish Americans for Peace Now. “Obviously, they speak to the heart of a lot of Jews.”

Founded in the spring of 2001 out of the Los Angeles home of Roz and Jerry Rothstein, StandWithUs was born of the couple’s anger over what they felt was an unfair media portrayal of the Jewish state during the second intifada. For Roz Rothstein, 56, the child of Holocaust survivors, the final straw came when two teenage Israeli settlers — Kobi Mandell and Yosef Ishran — were stoned to death in the West Bank. Rothstein, who had a practice as a family therapist, convened a meeting of some 50 Los Angeles-area Jewish leaders to discuss how to respond.

There, StandWithUs was born. “It took on a life of its own almost immediately,” said Rothstein, now the CEO of the organization.

By 2002, Rothstein had stopped practicing family therapy because of the demands of StandWithUs. The group is focused largely on campuses, where, Rothstein said, students have a dire need for tools and materials to explain Israel’s position. Today, StandWithUs has a paid staff of 50, a $4 million budget and staffers stationed across the country, as well as in the United Kingdom and Israel.

In this current crisis, StandWithUs has developed an increased Internet presence. For the first time, it is co-organizing protests through such social-networking sites as Facebook, and sending alerts through the micro-blogging site Twitter. Its Internet task force is designed to respond in real time to online criticism of Israel.

While StandWithUs has emerged as a leading group on college campuses, Aipac is tending to the political arena — especially at moments of crisis for Israel. A legendary powerhouse on Capitol Hill, Aipac reportedly raises more than $50 million annually and boasts more than 100,000 members. More than once, Fortune magazine has ranked Aipac as the second most powerful interest group in America.

The Israel Project, founded in 2002, educates journalists about the Jewish state and also conducts public-opinion research on attitudes toward Middle East issues. The group’s founder, Jennifer Laszlo Mizrahi, was a political consultant who once ran for Congress from North Carolina.

In years past, TIP has taken hundreds of journalists on helicopter tours of the Jewish state with the aim of educating them on Israel’s security threats. While the tours — tabbed as “intellicopter” tours — have not generated much press, they have proved helpful in building relationships with reporters, Mizrahi said. TIP currently has a database of 76,000 reporters, and according to Mizrahi, it now can reach out to journalists in six different languages. Mizrahi also said the organization’s budget last year was $6.7 million, and TIP now has a staff of 28.

In recent weeks, TIP has coordinated press conferences featuring top-ranking Israeli officials, including Aviv Shir-On, deputy director general for media and public affairs in the Foreign Ministry. According to Mizrahi, TIP has also taken reporters on tours of an Israeli hospital where injured Palestinians are being treated, and regularly posts free footage and photographs from the conflict. “One thing that’s consistent is that every media outlet is short-staffed and under-funded, so we want to make it easy,” she said.

Mizrahi explained that this latest Gaza crisis is different from the 2006 Lebanon War, which proved disastrous for the Jewish state both militarily and in terms of public relations. This time, Mizrahi said, Israeli officials knew in advance that the military attack was coming, and therefore they could work on messaging prior to the action. She added that the Israel Defense Forces is also providing aerial footage of its targeted bombings in a way that it did not two years ago. “We had time to prepare,” she said. “And the Israeli government has given us resources we didn’t have during the Lebanon War.”