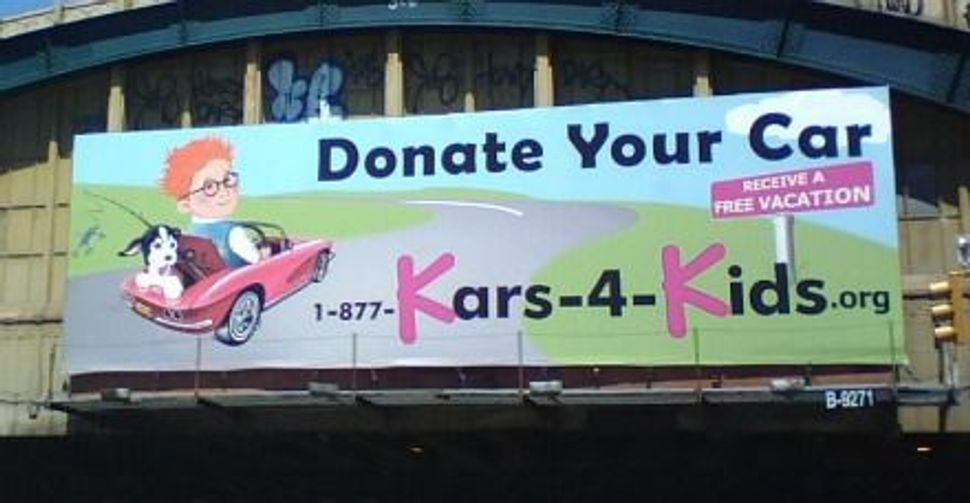 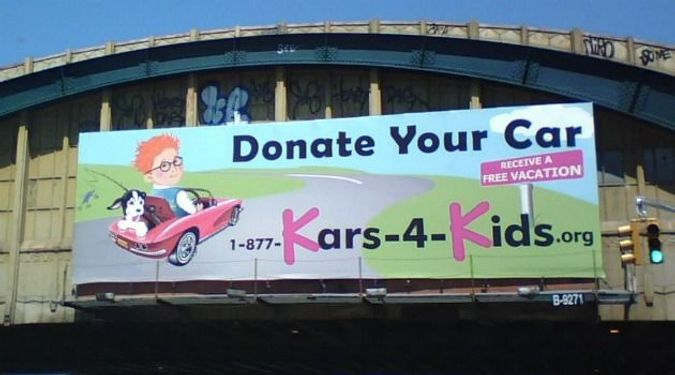 Courting Kontroversy: Kars4Kids is known for its eye-catching billboards and hummable jingles. A partner charity was ordered to pay a Jewish day school after a jury ruled it reneged on a deal to pay tuition for students. Image by consumerist via flickr

An Orthodox Jewish charity known for its omnipresent radio jingles has lost a federal lawsuit over $300,000 in scholarships that were allegedly promised to Jewish day school students.

A federal jury found in favor of the school on January 12 for the full amount demanded.

A charity closely affiliated with Kars4Kids, which runs a high-profile national advertising campaign soliciting donations of used cars, was accused of backing out of a deal to pay tuition for dozens of students it placed in Staten Island’s Jewish Foundation School.

One school official called the dispute “the saddest episode” in his half-century career in Jewish education.

The charity, which has been cited in an unrelated incident for failing to tell donors it was raising money for religious purposes, insisted it never promised to foot the bill for the years for which the school says it owes tuition.

“We have a monetary dispute to settle, but we’re not looking to make it into a street fight,” Eliyohu Mintz, president of the Kars4Kids-affiliated charity, Oorah, told the Forward. Oral arguments in the trial began on January 9 in Brooklyn Federal Court.

Kars4Kids, which airs the 1-877-KARS-4-KIDS radio spot nationwide, donates millions annually to Oorah. The groups share an address in Lakewood, N.J. Oorah in turn funds scholarships and summer camps for Jewish children. The JFS was one of many Orthodox schools that students attended on Oorah-funded scholarships.

The school says it responded by soliciting the students’ parents to make up the shortfall. That move angered Oorah, which cut off payments to the school.

Oorah claimed that the school’s fundraising effort was harmful, as the parents of the children were not religious and had agreed to send their children to the Orthodox school only because it would be free.

The two sides took their dispute to a rabbinical court. The three-rabbi panel found that Oorah owed the school funds for the 2006–’07 school year.

“Since the organization kept the children in the school, it is responsible to pay their tuition,” the panel wrote.

The dispute escalated when Oorah claimed that the school violated the rabbinical panel’s order to avoid publicly criticizing the charity.

In a 2008 school newsletter, Marvin Schick, president of the Rabbi Jacob Joseph School, which controls the JFS, wrote, “Oorah’s wrongdoing is the saddest episode in my more than 55 years of devotion to Torah [education].”

Oorah sued the school, alleging breach of the agreement brokered by a rabbinical court the previous year. Oorah’s lawsuit was filed in state court in New Jersey in order to keep the case quiet, according to Ronald Coleman, an attorney for Oorah.

The dispute over the alleged breach of contract has yet to be settled. But in its response to Oorah’s allegations, the school counter-sued in Brooklyn Federal Court, claiming that it was owed $375,100 in unpaid tuition.

The jury trial that began January 9 and ended January heard those claims.

The school’s lead attorney, Eli Feit, claimed in his opening argument that a 2002 agreement on scholarships was still in effect from 2007 to 2009 but Oorah had refused to pay for the students studying in the school during those years.

Feit claimed that the school had no choice but to educate the Oorah-sponsored children.

“Expelling these children is simply not an option for us,” Feit said.

In his opening statement, the charity’s lawyer, Frederick Whitmer, countered that there was no further agreement between Oorah and the school after the 2006–’07 school year and that the charity had every right to cut off the payments.

“The reason we didn’t pay this money is because we weren’t obligated to,” Whitmer told the jury.

The trial ended January 12, though further proceedings in the case could determine outstanding questions regarding the original breach of contract claim.

It’s not the first time Kars4Kids has found itself the subject of legal scrutiny. In 2009, the organization paid tens of thousands of dollars in settlements to state attorneys general in Pennsylvania and Oregon over their failure to disclose that the funds raised through their vehicle donation program benefited children of a specific religion.

The New York State Attorney General announced in 2010 that it had subpoenaed Joy for Our Youth — the name under which Kars4Kids is incorporated — as part of a broader investigation of charitable car donations.