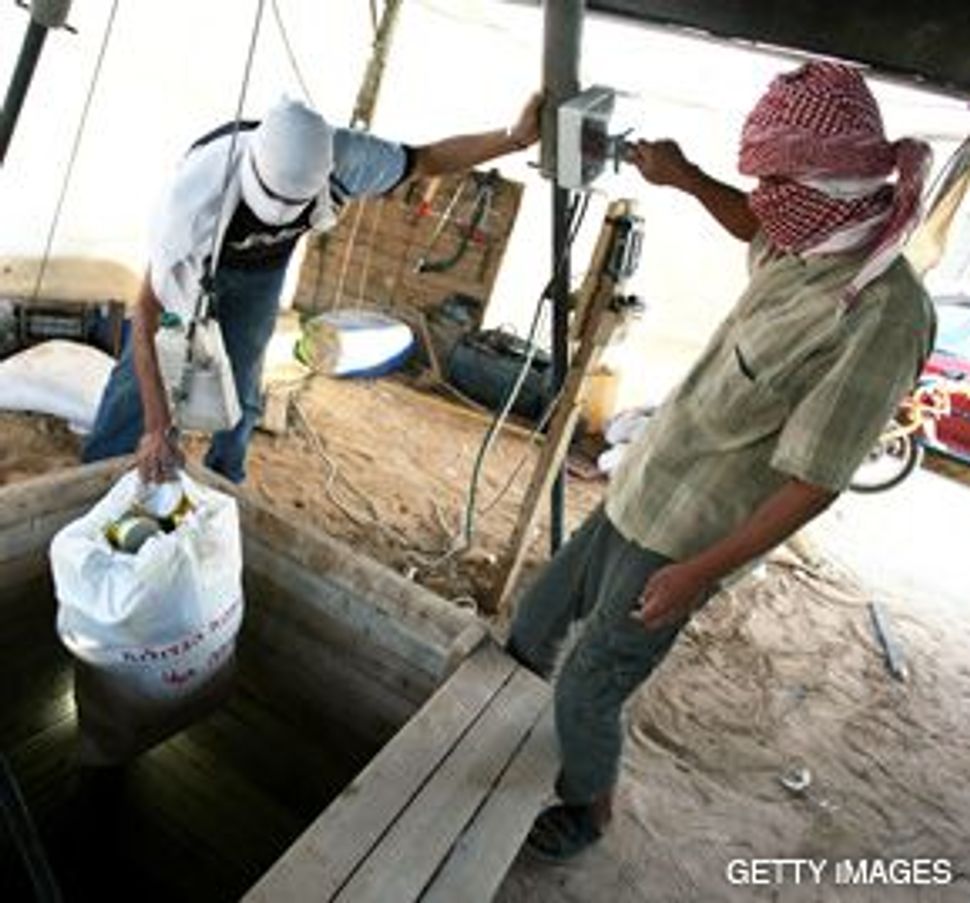 UNDERGROUND COMMERCE: A Palestinian in Gaza pulls up smuggled goods from Egypt, transported via a tunnel into Rafah refugee camp on the border. Other tunnels, dug by Hamas and targeted by Israel, are used to transport arms.

Tel Aviv — As Israel’s military campaign in Gaza entered its third week, Israel’s leaders were shifting the stated aim of their offensive to preventing Hamas from rearming by smuggling weapons through a series of tunnels between Gaza and Egypt. However indirectly, this meant Egypt, too, had become a focus of the ongoing offensive. 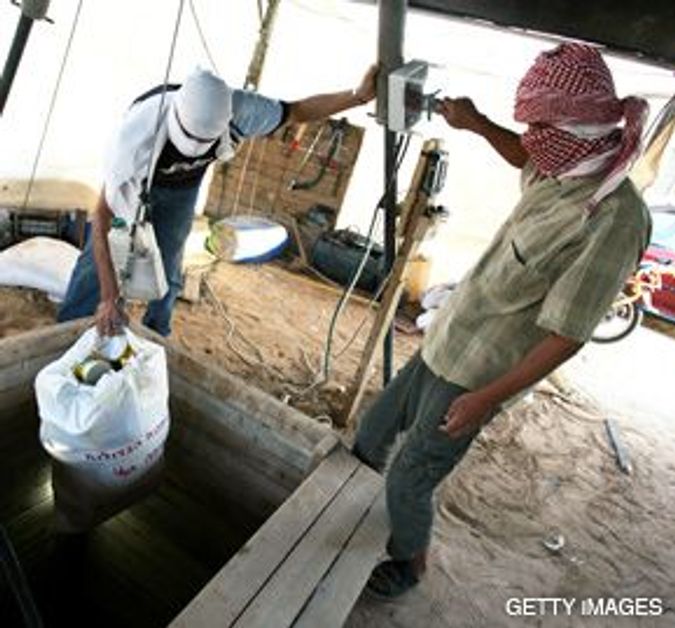 UNDERGROUND COMMERCE: A Palestinian in Gaza pulls up smuggled goods from Egypt, transported via a tunnel into Rafah refugee camp on the border. Other tunnels, dug by Hamas and targeted by Israel, are used to transport arms.

Previously, Israel had said the goal Operation Cast Lead, as the government dubs it, was to stop Hamas from firing rockets across the Gaza border into Israeli cities and towns.

But in a speech on January 11, Foreign Minister Tzipi Livni said that on that score, Hamas “already knows that the equation has changed and that Israel will not reconcile itself to its citizens being fired upon.” Now, she said, Israel was continuing its military operation because “the rearmament of Hamas must be prevented.”

On January 14, Egypt said it had brokered a truce to stop the fighting, but leaders of both Hamas and Israel remained at odds over details of the cease-fire and neither side had accepted it. Israel’s military action began on December 27, with air strikes on Gaza, in a move to stop the rocket barrages that Hamas fired into Israel.

While some security sources say that Hamas’s arms are being smuggled by sea, the consensus, and Israel’s working assumption, is that most are entering Gaza through tunnels under the Egypt-Gaza border.

Increasingly, while Israel was concentrating its military offensive against Hamas in Gaza, its objective seemed to be to elicit a response from Egypt for a major crackdown on arms smuggling.

It remained uncertain at press time whether Egypt would respond to Israel’s satisfaction. In a possible fallback plan, press reports indicated the United States and Israel could sign a memorandum of understanding that would commit the Americans to interdict arms shipments from Iran bound for Gaza by sea — a seemingly less effective means of blockade.

“What people need to understand, which largely they don’t, is that Egypt is playing the role of an honest broker between Israel and Hamas, but really it is a third side in the negotiations,” Boaz Ganor, executive director of the Herzliya-based International Policy Institute for Counter-Terrorism, told the Forward.

The question of whether it is realistic to expect Egypt to halt the arms smuggling into Gaza is vigorously debated by experts.

One theory is that despite pressure on Egypt from Israel and the international community, Hamas will continue to have arms smuggled from there. “I suggest that any prospect of a complete stop to arms smuggling is very naive,” said Yoram Meital, head of the Chaim Herzog Center for Middle East Studies and Diplomacy at Ben Gurion University.

Meital believes that Egypt lacks both the ability to overcome Hamas’s resourcefulness and an inclination to do so. “Anyone who expects Egypt to become like a collaborator with Israel by responding to all its requests is both naive and mistaken,” he said.

Meital added that Egypt objects both to the proposed methods for preventing the smuggling and Israel’s shifted focus on it. He argued that Egypt will not agree to an international force, deeming it an “affront to its sovereignty.” And, he said, the country is keen to avoid responsibility for stopping rockets from getting to Gaza, fearing that this is an adjunct to “placing responsibility for the next conflict [between the Palestinians of Gaza and Israel] on Egypt.”

Among experts who say it is conceivable that Egypt will — through stepped-up patrols and perhaps accepting international presence — halt smuggling, the analysis of the war is that the fighting continued long after a cease-fire was possible, in the hope that Egypt would be shaken into action.

“From day one, there was a situation whereby both sides wanted to achieve a cease-fire, though they both wanted a different cease-fire,” Ganor said. “Israel wanted one that ended the rockets and sealed the borders from arms entering Gaza; Hamas wanted one that stopped rockets but allowed them to bring into Gaza what they want.”

Ganor predicted that eventually, the international community would pressure Egypt into a solution that straddles the demands of both sides: It will open Gaza-Egypt crossings and agree to them being monitored by international forces or by the Palestinian Authority, and it will promise to stop the smuggling.

Unlike Meital, who fails to see an incentive for Egypt to get more involved, Ganor sees this as a way for Egypt to avoid a worsening of relations with both the Islamist Muslim Brotherhood and Israel, as he is currently being pulled in two directions. Hamas is an offshoot of the Muslim Brotherhood, which is strong in Egypt despite government measures to repress it.

Stopping the smuggling will meet Israel’s expectations, and opening the crossings with Gaza will meet the approval of the Muslim Brotherhood, Ganor said.

In addition, the Gaza conflict appears to be buoying the Muslim Brotherhood. “Egypt does not want to see unrest from the Muslim Brotherhood, which the Gaza conflict is creating,” said Yoram Schweitzer, senior research fellow at Tel Aviv University’s Institute for National Security Studies. “To stop Israel [from] attacking Gaza, Egypt will have to do more to block smuggling and will be preventing Israel from an incentive to return to Gaza.”

Ganor said that Egypt’s concern about avoiding fermentation within the Muslim Brotherhood is more important than most people imagine. “I would not underestimate the danger of an assassination of [President Hosni] Mubarak. Let’s not forget that [his predecessor Anwar El] Sadat was assassinated,” he said.

Justus Weiner, scholar-in-residence at the Jerusalem Center for Public Affairs, said that in addition to being concerned about the Muslim Brotherhood inside Egypt, it is concerned about unrest in Gaza. He cited the example of the Gaza-Egypt border breach that occurred earlier this month, in which thousands of Gazans entered Egypt. “Egypt understands that having a miniature version of Iraq on its borders does not serve its interests,” he said.

Those who believe that the smuggling may be stopped by Egypt generally see the task as relatively easy from a practical point of view. “It can be done by filling the area with good intelligence and filing up the tunnels,” said Shlomo Brom, a senior research associate at Tel Aviv University’s Institute for National Security Studies. He said that since Egyptian security forces are working under the basic principle that all tunnels have exits less than a half-mile from the border, the forces could find the tunnels if they wished.

There is no consensus on why Egypt hasn’t stopped the smuggling so far.

“My sense is that the Egyptian government, as long as it does not see arms smuggling as a threat to the Egyptian regime, does not see it as a major priority,” Weiner said. He added that porous borders are the norm for Arab countries.

According to Brom, Egypt has the capability, but it prefers to use its resources in other areas.

“Another reason is semi-political,” he said. For Egypt, the Bedouin are “a very problematic population… who feel they are not getting what they should.” Brom said he assumed that “Egypt is not keen to cause friction by removing what is an excellent source of income — smuggling.”

Ganor considers it possible that Egypt has “bought” calm among the Muslim Brotherhood by turning a blind eye to smuggling.