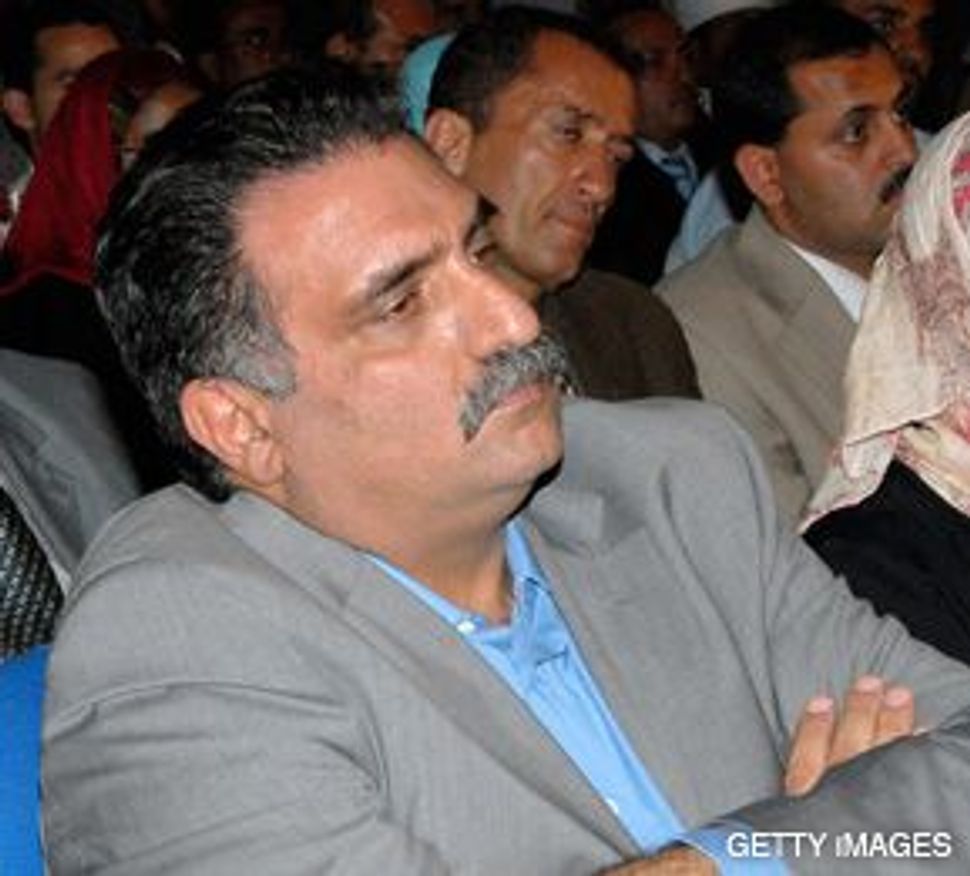 IN EXILE: Former Knesset member Azmi Bishara, leader of the Balad Party, attending a seminar on the Middle East conflict last May in Sanaa, Yemen. He fled Israel in 2007 while under investigation.

Tel Aviv — In a move that some Israelis are calling a nail in the coffin of Israeli democracy — and others deem an overdue stand against a domestic fifth column — the Knesset has disqualified two Arab political parties from running in next month’s general election. 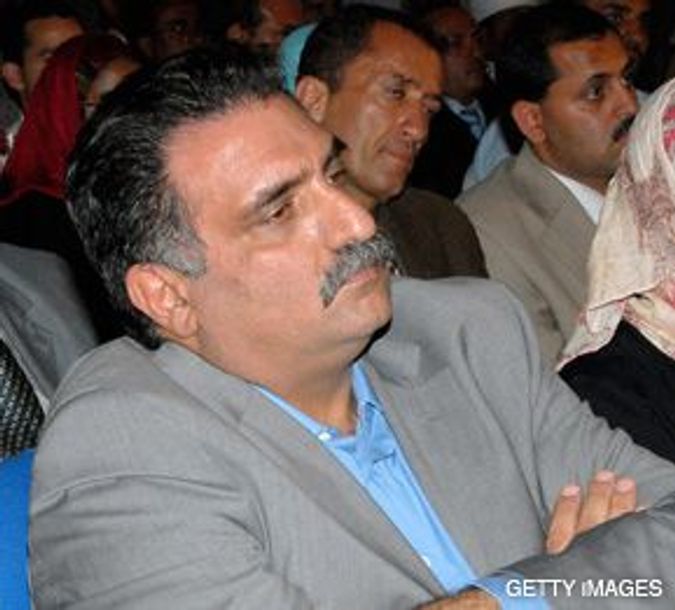 IN EXILE: Former Knesset member Azmi Bishara, leader of the Balad Party, attending a seminar on the Middle East conflict last May in Sanaa, Yemen. He fled Israel in 2007 while under investigation.

The Knesset Central Election Committee, comprising members of all Knesset factions, voted January 12 to disqualify the two Arab nationalist parties sitting in the outgoing Knesset — the National Democratic Assembly-Balad and the United Arab List-Ta’al — from running in the February 10 elections.

The ban, which many experts expect the Supreme Court to overturn, was introduced by lawmakers from a right-wing Jewish party. The ban’s initiators said they were responding to the Arab parties’ displays of disloyalty to the state in recent years. Lawmakers accused the two Arab parties of supporting armed struggle against Israel and seeking to undermine the state’s Jewish and democratic character. They based their measure on a 2002 amendment to the quasi-constitutional Basic Law, which permitted the banning of a Knesset faction if its goals or actions support the “armed struggle” of a terrorist organization or foreign country either implicitly or explicitly.

There are currently 12 Arabs serving in the Knesset. The ban does not affect the Arab lawmakers who represent predominantly Jewish parties or the predominantly Arab, but ethnically mixed, Hadash party. Nor does it ban all Arab-only parties. Factions other than Balad and UAL-Ta’al — such as the new Arab Center Party — will be free to run. But that makes little difference to the disqualified politicians. “It is very racist to tell our community that its leadership is disqualified,” Ta’al leader Ahmed Tibi told the Forward.

High among the complaints is the fact that Tibi, whose UAL-Ta’al has four Knesset seats, is both a Knesset member — indeed, a deputy speaker — and closely associated with the Palestinian Authority. He was an adviser to former P.A. chief Yasser Arafat, and he participated in the 1998 Wye River peace negotiations — on the Palestinian side — shortly before his first Knesset bid in 1999.

The debate over where Tibi’s allegiances lie came to dominate the headlines most recently in April 2008, when he registered at the Doha Forum on Democracy, Development and Free Trade, in Qatarß, as leader of the Palestinian delegation. “Israel is an apartheid state,” he said to Foreign Minister Tzipi Livni during a session in which she was speaking from the podium. The episode prompted Deputy Foreign Minister Majalli Whbee, a Druze member of Kadima, to say it was “time for Ahmed Tibi to decide which country he represents.”

Tibi’s critics also complain that his statements on Palestinian “resistance” imply support for armed struggle. Only a day after the election committee approved the ban, Tibi defiantly told the Forward that it is the “right of people under occupation to struggle against occupation.” He acknowledged that “political negotiation is the optimal way accepted by the international community” but insisted that it is “the right of people to decide how to struggle.”

Resentment has been even stronger toward Balad, which has three Knesset members. Anger is focused mostly on party founder Azmi Bishara, who was investigated by police in 2007 for allegedly assisting Hezbollah in the Second Lebanon War. Between interrogations he left for a meeting in Jordan and has not returned, reportedly because he fears an unfair trial and long imprisonment. He resigned from the chamber in 2007, in a letter submitted to the Israeli embassy in Cairo. He remains head of Balad, reputedly living mainly in Jordan, and communicates with party leaders by phone. He still receives a Knesset pension of around $2,000 a month. A move in the Knesset to stop payments was blocked by the Supreme Court.

Once a popular figure among the Arab public, Bishara mounted an unprecedented, if largely symbolic, campaign for prime minister in 1999. With the outbreak of the second intifada in 2000, his image soured along with Jewish-Arab relations in general. In 2002 he was indicted for incitement to violence and aiding a terrorist organization, following a visit to Syria where he delivered a speech allegedly praising Hezbollah. The charges were dropped before trial because of his parliamentary immunity.

In September 2006, all three Balad lawmakers visited Syria, sparking a media uproar. In response, the Knesset passed a law in July 2008, barring Israeli citizens who visit an enemy country without permission from running for Knesset for several years from the day of the visit. It also designates them “a supporter of armed struggle, unless they prove otherwise.”

The current ban is not the first effort to disqualify Arab parties. The committee voted in 2003 to bar Bishara and his party, along with Tibi, but it was quashed by the Supreme Court. This time, while many experts expect the court to follow its previous precedent, others say it might be less inclined to overturn the ban, given the allegations that Bishara assisted Hezbollah.

For the ultra-hawkish Yisrael Beiteinu party, which initiated the latest disqualification effort, the Arab parties have crossed a red line. “Even a democracy has to defend itself against those who want to undermine the very foundations of its right to exist,” said Yisrael Beiteinu Knesset candidate Danny Ayalon, a former ambassador to Washington.

Ayalon charged that the disqualified parties consist not of legitimate politicians but of “rabble rousers” who incite unrest in Arab communities. Clearly alluding to Bishara, he said: “It’s fine to advocate, but not to take extreme measures like espionage and causing unrest.”

Unlike past efforts, the latest disqualification bid won support from the center and even the left.

The ruling Kadima party backed the motion because it saw it as a case of Israel’s “responsibility to protect itself from those who wish to use its liberties against it in an attempt to destroy it,” said party spokeswoman Maya Jacobs.

“Balad aims to exterminate Israel as a Jewish state, and to turn it into a state of all its citizens, which is in contradiction with the Israeli Proclamation of Independence,” Jacobs said. “In addition, Balad continues these days to cherish its founder, Azmi Bishara, who has worked and continues to work with the worst of Israel’s enemies.”

Moreover, she said, “Ahmad Tibi and his friends [in UAL-Ta’al] support Hamas, support terrorism and oppose every safeguarding Israeli activity.”

Labor’s committee representative, Eitan Cabel, surprised politicians and the public by backing the ban on Balad — though he opposed banning Tibi’s UAL-Ta’al. He drew fire from party colleagues who said that disqualification of parties is against Labor policy. But party spokesman Yoav Sivan justified the move. “We usually don’t support the disqualification of parties,” he told the Forward, “but Balad just went a bit too far in its positions against Israel. Its positions have become more and more radical.”

Only two Jewish parties rejected the bans on both Arab factions. Meimad, the dovish Orthodox party allied to Labor, decided the proposal held “catastrophic repercussions for relations between Arabs and Jews in Israel,” said party spokesman Nir Hirschman. Meretz, which is to the left of Labor, also voted against the ban. Party leader Haim Oron blasted mainstream parties for siding with the “radical right” whenever “a clear statement to ensure basic civil rights of the Arab minority is required.”

Adalah’s director-general, Hassan Jabareen, told the Forward that if the decision is not quashed, Israel will no longer be able to claim it is a democratic state.

“Members [of Knesset] voted that parties that are for a democratic state for all its citizens cannot run because they don’t agree with the Jewishness of the state,” he said. “It is against the pluralistic idiom that says that every political party is allowed freedom of expression in politics.”

He denied accusations that the parties support armed struggle. The accusers, he said, “have to provide serious proof to claim that.”

But there is a feeling in the Arab community that even if Adalah gets the decision overturned, the damage has already been done, as people are losing faith in political representation altogether. Some community leaders are urging Arab voters to boycott the February 10 election.

“More and more we see don’t ourselves as part of the Knesset and conclude that Arab representation is almost worthless,” said Mohammed Zeidan, director of the Nazareth-based Arab Association for Human Rights.

Zeidan, who plans not to vote, said the Knesset is increasingly focused on measures to reinforce the state’s Jewish character, “strengthening the idea that this is not our Knesset.” Arab lawmakers are “marginalized in the Knesset,” he said. “Their power to affect real decision-making is minimal.”

A leading Arab political scientist, Amal Jamal, chairman of the political science department at Tel Aviv University, predicted that voter turnout in the Arab community, already a relatively low 60% in the last election, could drop to 30% in February if the disqualification remains in force.

He believes that several parties that backed the ban, especially Kadima and Labor, secretly hope the Supreme Court challenge will be successful, since “the presence in Knesset of Arab parties is one of the most important factors in legitimizing Israeli democracy.” They backed the ban, he said, as a pre-election play to an Israeli electorate when nationalistic feeling is high due to the war. “The decision by Labor and Kadima [to back the disqualification] has to do with the public mood. Opposing it would have been seen by the Jewish public as not patriotic.”