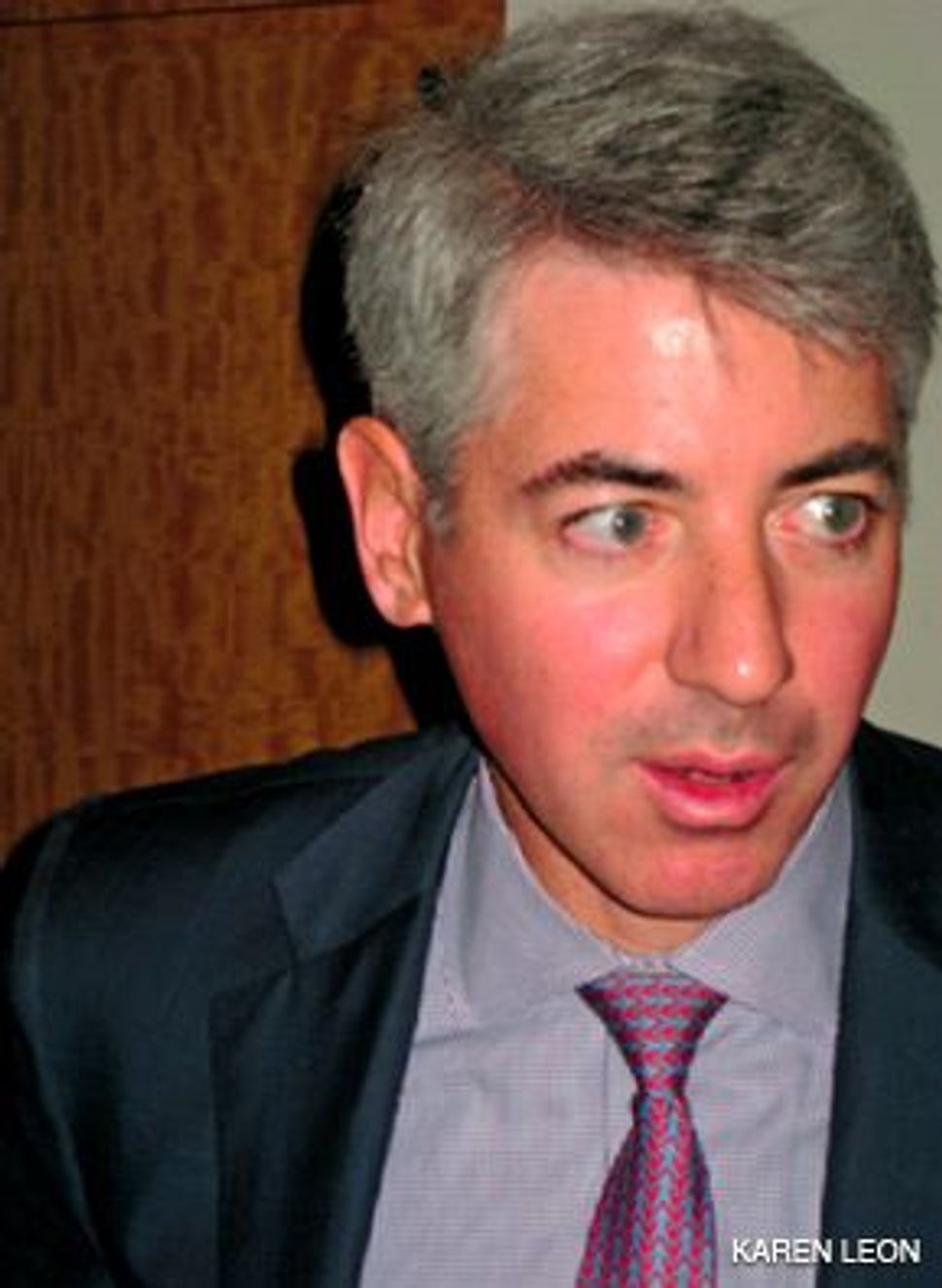 On the Panel: William Ackman spoke at the event.

SPOTLIGHT ON MADOFF (“THE MOMSER”) AT YIVO PANEL DISCUSSION 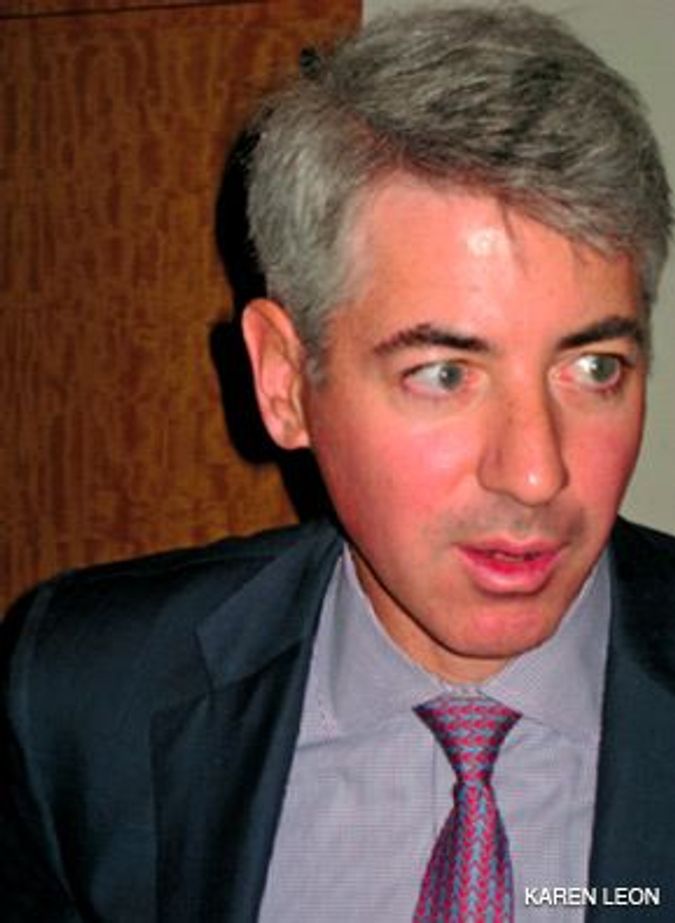 On the Panel: William Ackman spoke at the event.

When I mentioned to someone that I’d be attending the YIVO Institute for Jewish Research’s January 15 panel discussion, “Madoff: A Jewish Reckoning,” the snap retort was: “That momser! They should hang him like in the Wild West.” At the Center for Jewish History, no one rose with clenched fist or damned Madoff to everlasting Gehenna. Instead, the stellar panel — Simon Schama, Mortimer Zuckerman, Michael Walter, William Ackman, Michael Steinhardt and master of ceremonies Marty Peretz, engaged in an intellectually charged discourse that addressed “the human tragedy of Madoff’s Ponzi scheme.” Ponzi, Zuckerman (who lost $30 million of his foundation’s money) clarified, “is an Italian word.” Ackman, who was once investigated by Eliot Spitzer, described the anguish of false accusation prior to having his good name restored to innocent from outcast: “This is not the Wild West, you can’t string the man up… In America you are innocent until proven guilty.” Someone suggested a beit din or a “Judgment in Nuremberg” style trial, with Madoff in the docket reciting the evil he has done. By evening’s end, Steinhardt posited, “Maybe now, the brightest Jews, instead of heading for Wall Street, will become doctors again… or opera singers.”

“My mother would have called this a klole [a curse],” noted Peretz, editor in chief of The New Republic and chairman of YIVO’s Board of Overseers. “Madoff victimized [not only] Jews. This was not an affirmative action… [and it] reflects a crisis of Jewish ethics.” Ethics, its application or avoidance, fueled Schama, Columbia professor, historian and author; Walzer, political and moral philosopher and co-editor of the quarterly Dissent; Ackman, Pershing Square Management hedge fund CEO, former chairman of the Jerusalem Foundation and YIVO Board of Overseers, and Steinhardt, Jewish philanthropist extraordinaire and financial maven, to indulge in a far-reaching verbal outpouring on the many facets of ethics. (Zuckerman, publisher of the Daily News, editor-in-chief of U.S. News & World Report and major real estate investor for Boston Properties, left early.) They cited so broad an arc that references included the Torah, the Talmud, Pirke Avot (Wisdom of our Fathers), the Essenes of Qumran, the French Revolution’s Jacobeans, the 1914 Ostrich feather bust, the 1637 Tulip panic, Jewish trade between the Caribbean-Spain-Venice-Genoa, “The Protocols of the Elders of Zion” and the writings of English novelist Frances Troloppe. The audience seemed to enjoy the erudition, which at times trumped the Madoff scandal.

Citing the long ingrained concern about what the gentiles will think, Steinhardt recalled, “In Brooklyn, if something happened, we hoped and prayed that the evildoer was not Jewish. [Because] if something bad is done by a Jew, it would discredit the entire Jewish community.” Steinhardt noted past evildoers Boesky and Milken… [they] came and went.” He expressed optimism about the future of the Jewish community in America and conviction that the Madoff debacle does not suggest heightened antisemitism. At evening’s end, Steinhardt aimed his verbal guns at the duplication of Jewish philanthropic institutions that have “outlived” their usefulness, accusing one of “spending $150 million in order to deal with 18 antisemitic incidents.” Representatives of the institutions he cited were either not in the audience or reluctant to identify themselves.

There is nothing so distressing as arriving at an age when they begin to give you prizes and honors,” said Loren Maazel, music director of the New York Philharmonic, when he was presented with the America-Israel Cultural Foundation’s Aviv Award at AICF’s December 2008 gala concert, held at Jazz at Lincoln Center’s Rose Theater. “I think I am no different than my colleagues who perform, complain, move into the next day after day, season after season.” Maazel accepted the award from Jonathan Bliss, a winner of the 2005 Leonard Bernstein award. Pianist Leon Fleisher, whom Maazel called “a living legend,” received his award from pianist Emanuel Ax, with whom he performed a piano duet. “Music has the capacity to deflect arrows of acrimony or defy the demons of hate,” said Fleisher, who gave his first concert at the age of 8. At 37, he lost the use of two fingers on his right hand, thus short-circuiting his career. Several years ago he was treated for the neurological affliction focal dystonia, and in 2004 he made his first “two-hand” recording in 40 years.

At this, the 60th birthday of Israel and the 69th year of supporting the cultural life of Israel, AICF president Bill Schwartz told the audience, “In Israel a student can study for $1,800 a year. That’s all it takes. Without [this] the world would be a poorer place.” Alluding to the demise of 401(k)s and to the current financial impact on the arts, Schwartz’s bittersweet, laughter-eliciting observation was, “I am donating my 201(k) to be used to help fill empty seats.”

‘THE READER’ — A FILM ALL ABOUT CHOICES — SEX, TRUTH AND CONSEQUENCES

“The Reader,” based on the book by German novelist Bernhard Schlink, is an odd Holocaust movie. The film stars Kate Winslet, who won a Golden Globe for her performance and who is up for an Oscar for the role. Toward the end of the movie, we learn that Hanna Schmitz (Winslet) — a tram conductor more than twice the age of then 15-year-old Michael (David Kross), whom she seduces — has a secret that in the United States might send her to jail for pedophilia, but in Germany nails her for crimes against humanity. Interestingly, Ralph Fiennes, who plays the still-smitten and haunted adult Michael, portrayed Amon Goeth, the brutal Nazi commandant of the Plaszow concentration camp in Steven Spielberg’s “Schindler’s List.” With nuanced performances by all the actors and a startling confrontation with a Holocaust survivor’s daughter, played by Lena Olin, the film is strangely seductive despite some inconsistencies you may prefer not to pursue lest the entire premise of the story unravel.

Called “The Reader” because Michael trades his reading skill for sex with Hannah, the contradiction surfaces during the trial at which Hannah, unable to sign her name, condemns herself to a fate she could have avoided. The question is, since she is a conductor in postwar Germany — a country still meticulously wed to bureaucratic detail — it would seem that in order to get her job as a tram conductor, she would have had to at least been able to sign her name and read street signs. Don’t let this keep you from seeing this beautifully structured and acted film. The pity is that its producers, Sydney Pollack, who died of cancer on May 26, 2008, and Anthony Minghella, who passed away on March 18, 2008 at 54, did not live to see the final cut.

I’m told that every young man in Germany read the book because of the erotic relationship with the older Hannah. Would this have been the case, if it had been promoted as a “Holocaust” book — but without the older woman-younger man dynamic? In the “Notes” that accompany the press kit, there is a section on the ways in which Germany deals with its postwar guilt. It notes: “The Reader author, Bernhard Schlink and his German contemporaries were in a unique position — they were wholly blameless for their parents’ crimes, yet they were born and raised under the shadow of these great atrocities. How his generation, and indeed all generations after the Third Reich, comes to terms with the crimes of the Nazis is what Schlink refers to as “the past which brands us and with which we must live.”

This brought me back to my August 1988 Forward article, “Conversation With Four Young Germans.” My husband, Joe, and I were walking near the pool at the Catskills Concord Hotel when we suddenly heard German spoken by several young men. The four men were tall, tanned, handsome and blond, typical of Hitler Jugend propaganda posters. I had to consciously repress my visceral reaction and reorient myself to time and place. The following is excerpted from my extensive interview with Matthew Stempinski of Munich, Nico Schoenecker and Christoph Deutsch of the Munich town Grafelfing and George Veitof Vrailling.

“I’m quarter Jewish,” said one; “I heard a lot about the Second World War, what happened to the Jewish People, but I had no Jewish people or relations in my family. I am unable to see, recognize, Jewish people if I meet them. From the beginning at this hotel, I never got the idea that these people could be Jewish… they are all nice and friendly.” A pause, and then, “Some were a little nervous, because [they thought], ‘they re German.’” One mentioned that, in the bar, the night before, a Holocaust survivor, hearing the boys’ German, began repeatedly screaming at us, “You killed six million!” One of men responded: “Nobody can forget what happened 40 years ago.… Some girls who are very religious were scared when they heard we were German.” The boys, who were working as pool boys or as tennis or sports coaches, were amazed that Americans knew so little about the postwar Germany, yet the Germans were studying the Holocaust in school. “It’s only 40 years ago, but… people can’t deal with the fact that we are a younger generation and had nothing to do with it.” The debate escalated after when Joe asked, “Did they teach you anything in school about the link between antisemitism and the Christian Church in Germany?” “The Church was totally resistant to the Nazi regime,” said one. “No, Nein, Die Katolische Kirche… there was a Concordat between Hitler and the Catholic Church!” one responded. When asked if they knew how old the German Jewish community was, one replied, “I know the date of the oldest Jewish cemetery, in Worms, about the 13th century.” They were surprised to learn that the Jews came to Germany with the Roman legions and were solidly settled between the eighth and ninth century.

One said, “There are a lot of young Germans who go to Israel to work on kibbutzim.” Another added, “There is a Club Med in Israel and we have many [Israeli] friends.” Apropos Jewish appearance, they were all surprised. “I am often surprised to find that someone is Jewish… For me, people are just American. But the Jewish people are always so aware that they are Jewish.” Back to the Holocaust: “There are hundreds and hundreds of books and movies and all that… that’s a problem in Germany now. There is always something on TV, always things about the Holocaust… Yes. We know our people are guilty, but just leave us alone with that. It happened 40 years ago. Don’t keep telling us again and again.”